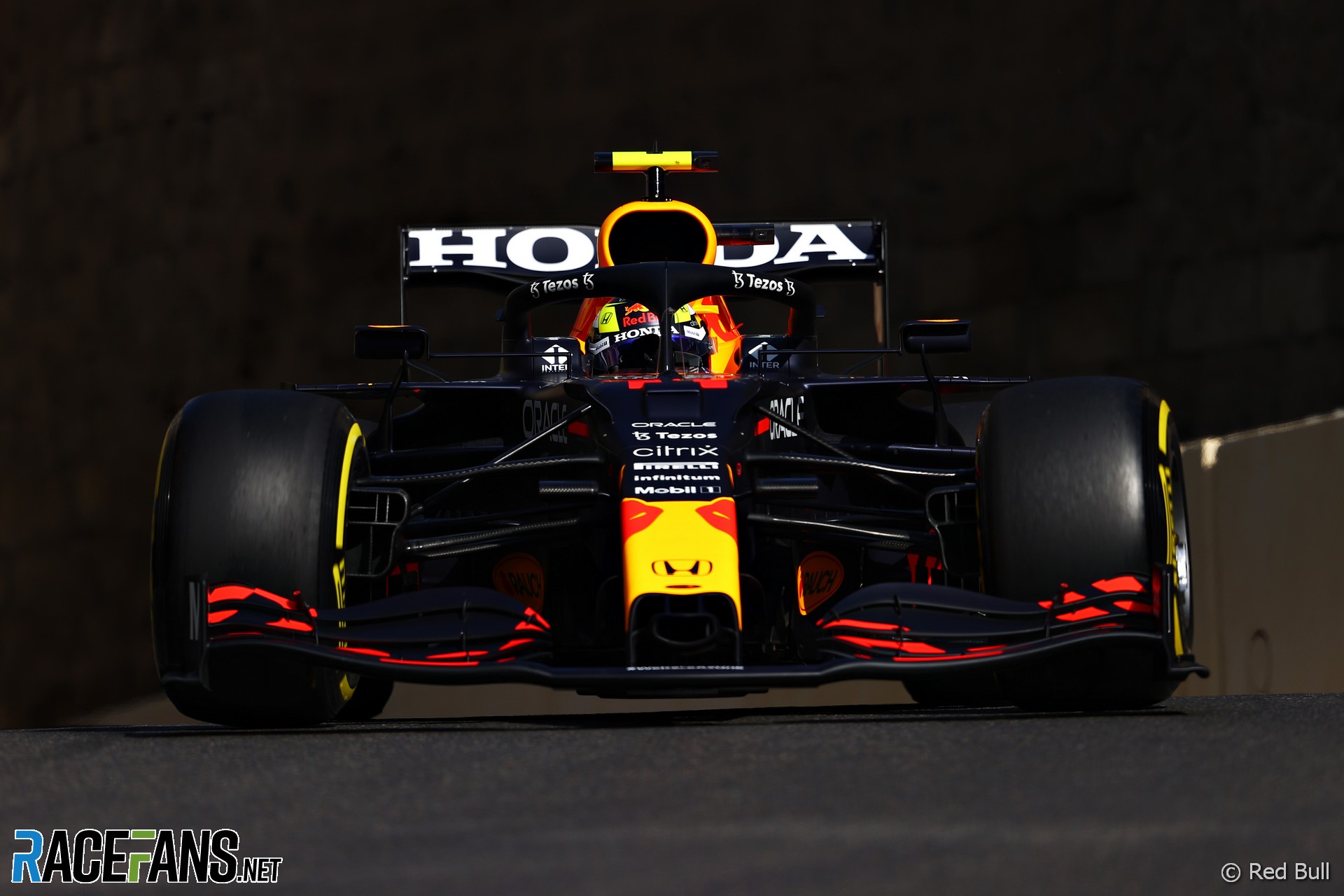 Red Bull and Ferrari have, as in Monaco, out-paced Mercedes at the Azerbaijan Grand Prix so far. But will that situation continue into qualifying?

It’s not a great surprise that Red Bull are fast. It’s not even hugely surprising that Ferrari are competitive and McLaren have shown flashes of real speed – they both did in Monaco, and although Baku City Circuit is a radically different track in places, the castle sector is very comparable.

What is more of an upset is Mercedes’ performance – the world champions were the seventh-fastest team after second practice. On the face of it, their drivers might be more concerned about reaching Q3 than having a shot at pole position, after finishing the day 11th and 16th.

On and off the pace

Two things are clear about the single-lap pace in Baku: for now, at least, Red Bull are setting it and Mercedes are quite some distance off.

Red Bull haven’t entirely had it their way, so this isn’t a coincidence of lucky towing (more on that later) but what seems to be genuine pace being shown. Max Verstappen encountered traffic in first practice and Sergio Perez didn’t set a representative lap for most of the session, although Red Bull said that was due to the programme he was following.

Still, they finished the session with Verstappen on top of the times and Perez bested him in second practice for a Red Bull one-two, the Ferrari drivers just behind. In previous years, it might be believable that Mercedes were hiding their pace, but it’s doubtful they’d do it to the tune of a full second, even if they were bedding in their freshly-fitted power units.

If any of the Mercedes-powered teams was keeping its powder driver it seems more likely to be McLaren. The orange cars went on long runs during the afternoon session without apparently jostling hard for positions on the timing board.

AlphaTauri also seem reinvigorated by the return to a quicker circuit. That said, Pierre Gasly has been a regular feature in the top five on a Friday across the year. Team mate Yuki Tsunoda’s new, team-controlled training regimen seemed to have brought him closer to Gasly’s pace, and he finished second practice ahead of Lewis Hamilton.

The Mercedes drivers, after second practice, didn’t have an explanation for their troubles. Except, Valtteri Bottas said, a lack of grip. Hamilton also sounded mystified by their performance after his qualifying simulation run in second practice:

Pirelli have brought the same compounds to Baku that were used in Monaco. Mercedes struggled to get their tyres working in the principality and that appears to the case again this weekend.

While Mercedes preferred the warmer temperatures on Thursday in Monaco, that doesn’t seem to be the case this weekend. In Baku the track temperature is much higher, reaching 50C during second practice compared to temperatures in the 20s during the same session in Monaco.

It seems one of the characteristics of the Mercedes car this year is that it prefers to work with harder compound tyres. This weekend appears to be a further indication this is the case. They must be breathing a sigh of relief at the news of Singapore’s cancellation.

Despite their strong placing at the end of practice, Ferrari didn’t sound entirely happy with how their afternoon session. Radio messages from both drivers’ cars indicated they were running hot, suggesting a need to open up the bodywork for better cooling, potentially compromising aerodynamic performance.

Early in second practice Charles Leclerc did not so much kiss turn 15’s TecPro barrier as clumsily lunge at it like a lovestruck teenager, breaking his front wing and forcing a mid-session replacement. Later in the session Leclerc reported “huge graining” having set his best lap. In the final moments, on six-lap-old medium tyres, an alarmed Leclerc asked the team “can I box, I’m going to crash?” reporting the tyres completely gone after only a relatively short stint.

In stripping their car of downforce in order to compete on the long straights of Baku, Ferrari may have made a different problem for themselves by swapping single-lap-pace for tyre longevity. In a place like Monaco, that’s a trade-off worth making but as Mick Schumacher observed in Baku overtaking opportunities are “everywhere”, so it’s less likely to bring a result on Sunday.

Baku is windy, with long straights that frequently get a real headwind – as at the start of second practice, through the long first sector. That means a tow – using the shelter of another car to punch through the air ahead to build up acceleration – can be worth a huge amount.

After second practice Daniel Ricciardo estimated it could be worth up to half a second – a massive difference in the tight midfield – if you could pull it off. “It definitely makes a massive difference here, but it’s hard, too. Sometimes if you plan it, you can have yourself over.

“If you get lucky, it can give you literally half a second, so we’ll see tomorrow, I haven’t thought that far ahead, but it is massively efficient here if you can get it right.”

Riccciardo’s having a relatively strong weekend, so far. In first practice he led Lando Norris (who made some uncharacteristic errors, including a spin on what would probably have been his best lap) and wasn’t far from him in the second, the McLarens not seeming to go for any real qualifying simulations this afternoon. However, they aren’t the team mates who look to be tussling for pole.

But the contest at Red Bull could be decided by whichever driver has priority during qualifying. “Within the team you always have a rule,” Verstappen explained, “one weekend one starts first and the other one for the next and you just keep switching it around.”

“I don’t even know actually if I’m ahead now or behind,” admitted Verstappen, who was the first of the two Red Bull drivers to leave the pits in Monaco. Expect him to have a very clear idea when Q3 rolls around.

Whether Verstappen was bluffing or not, he did agree with Ricciardo that it’s hard to game the tow here. “You need to have a bit of luck to get that tow to the line. I think it’s really hard to plan most of the time if you try to plan, it fails. So it’s better to just try and do the best that you can. And normally that should be a good enough lap to be more or less where we should be.”

The power of a tow is easy to see. Antonio Giovinazzi, driving an Alfa Romeo, set the fastest third sector of all. That’s unusual, for a car that’s struggled to reach Q3 – that sweet half-second of extra time can make the difference between twelfth and ninth-fastest, as he was in the first and second sectors and finishing ahead of both Mercedes cars on the timing sheet.

Although it was only really Giovinazzi, of the backmarker teams, who managed to make the most of a tow during practice it’s possible that there could be Q2 upsets from getting the perfect timing, with all 20 cars out on track during Q1. It’s also worth noting that for any attempts to choreograph a tow – as ended a little farcically in Monza in 2019 – drivers have been explicitly warned against driving slowly, especially in the final sector, to create a favourable gap.