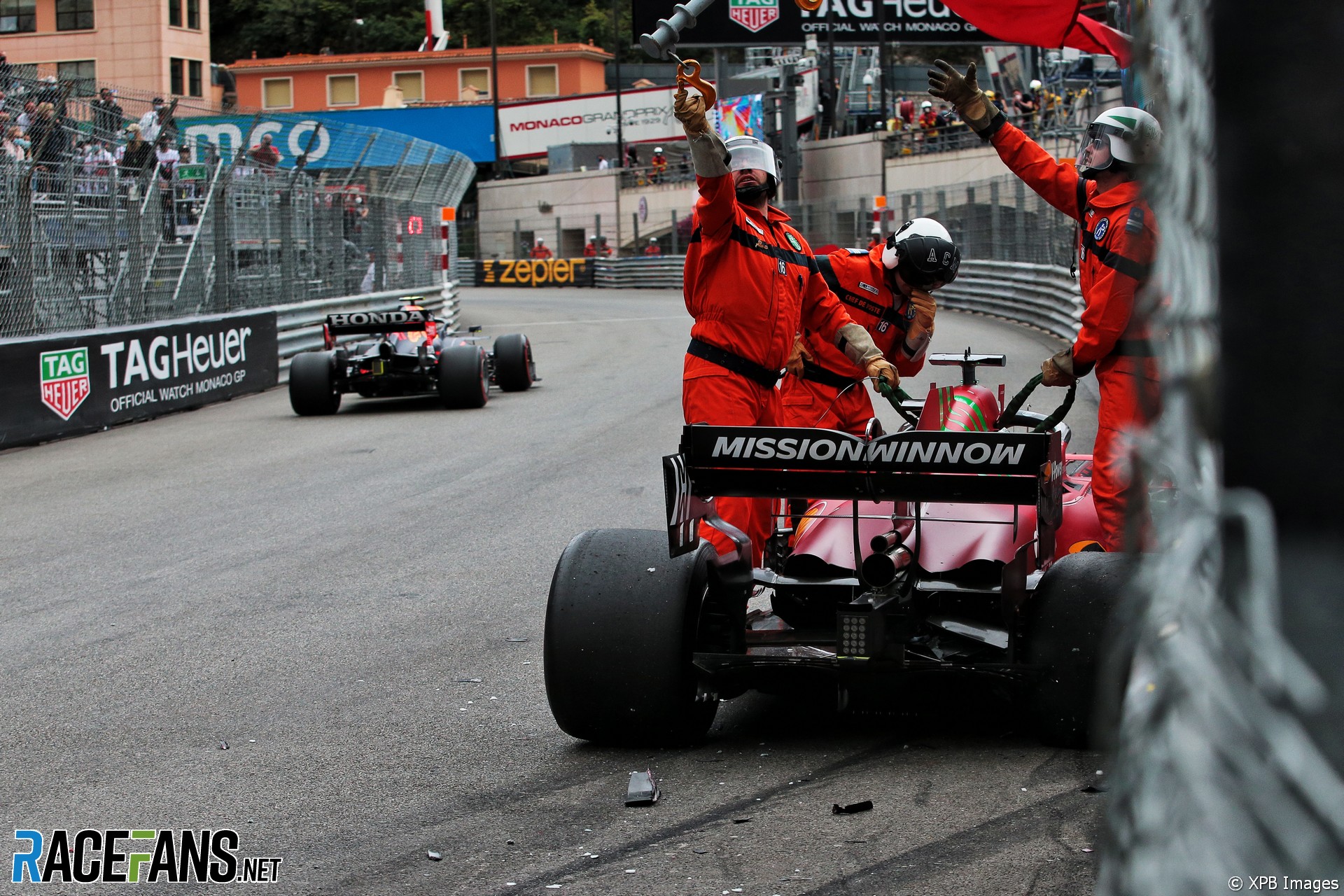 Charles Leclerc’s crash during qualifying for the Monaco Grand Prix, which secured him pole position as it prevented any rivals beating his time, prompted debate over whether F1 should change its rules to ensure drivers cannot benefit from crashing. In IndyCar, drivers who disrupt qualifying sessions automatically have their quickest lap times deleted.

But Steiner says F1 doesn’t need a similar rule, insisting it’s easy to tell if a driver has intentionally crashed.

“I wouldn’t be a big fan of that one if it was to be implemented,” he said. “It obviously came up because Charles Leclerc hit the wall pretty hard on his last run in qualifying, but obviously it was not intentional. If it had been, the FIA would have seen that, it’s very easy to see that on the data if somebody’s done something intentionally. I don’t think there’s a need to start this discussion.

“What if instead of a red flag there was only a yellow flag and some people slow down and not some others – do we still cancel the lap of the guy who brought the yellow out?

“It’s worked for a long time as is, and it’s happened once, especially in Monaco where it’s very easy to crash by the way, I don’t think it’s a problem we need to fix at the moment. It’s part of the risk you take though if you go out late in qualifying. If people had gone out earlier maybe it wouldn’t have happened. I think if somebody does something on purpose there should be consequences, but this wasn’t the case in Monaco.”

Yuki Tsunoda says his difficult start to his first F1 season are rooted in how he is setting up his AlphaTauri.

“The technical aspect is still quite challenging,” he said, “in the current situation I have been struggling a bit with the car set-up. I believe that is normal as I have only done five races, but the important thing is that I am learning a lot about the car.”

Despite not having added to the points he scored at the season-opening race in Bahrain, Tsunoda believes gains are being made.

“I am pleased with the definite progress made by the team with the car since the beginning of the season,” he said. “It’s true the results have not come together yet and I am on a steep learning curve. I spend as much time as possible talking with my engineers to learn more and I hope that will help me continue to make progress through the season.”

Daniel Ricciardo has been hard at work in McLaren’s simulator trying to get to the bottom of his first point-less weekend of the year in Monaco.

“It’s been important to take time to reset and refocus before heading to Baku,” he said. “The team and I have been working hard in the sim to understand, analyse and pinpoint the key areas we need to improve.

“We know the car has good potential, we just need to put all pieces together to unlock it. There’s still that element of adapting to a new car which I’m sure will come with more time and mileage behind the wheel. I’m going to keep working at it, build on the progress we made in Portugal and Spain and try to feel as one with the car.”

"Also up for debate is Monaco’s rigidly fixed end-of-May date, a bind given how nimbly the sport has had to shuffle its calendar over the past 18 months."

‘We’re not making crazy changes to the car,’ says Aitken as he backs HWA to move up the field (F2)

"It was pretty tough (to step in at Monaco), but I didn’t have a choice. The team have been pretty good with helping me to get back into the processes and now I feel quite comfortable. It’s just a shame that the weekend in Monaco revolves around Thursday afternoon quali."

"United Autosports have continued their drive to invest in new talent by announcing a currently one-off entry in the GT4 European Series at Zandvoort in a third McLaren 570S GT4 to be fielded by the team for co-owners Zak Brown and Richard Dean."

Finally, Roger Penske gets first 'real' Indianapolis 500 as the man in charge (ESPN)

"The billionaire grins. 'And that includes me. In the end, I'm still a race fan first.'"

He’s not wrong. I don’t think the tyre discussion really means much to the average fan, especially when they get into the nitty gritty.

When the operating window is so unfathomable, even to the drivers themselves sometimes, to the extent you have maybe one sector of the lap where the tyres are turned on and the rest suffering, then what are we really doing?

I want to see the best drivers in the best cars. Tyre management in a traditional sense is part of that sure, but these tyres seem so inexplicable and when the entire show comes down to them more often than not it’s disappointing.
@Davidhunter13