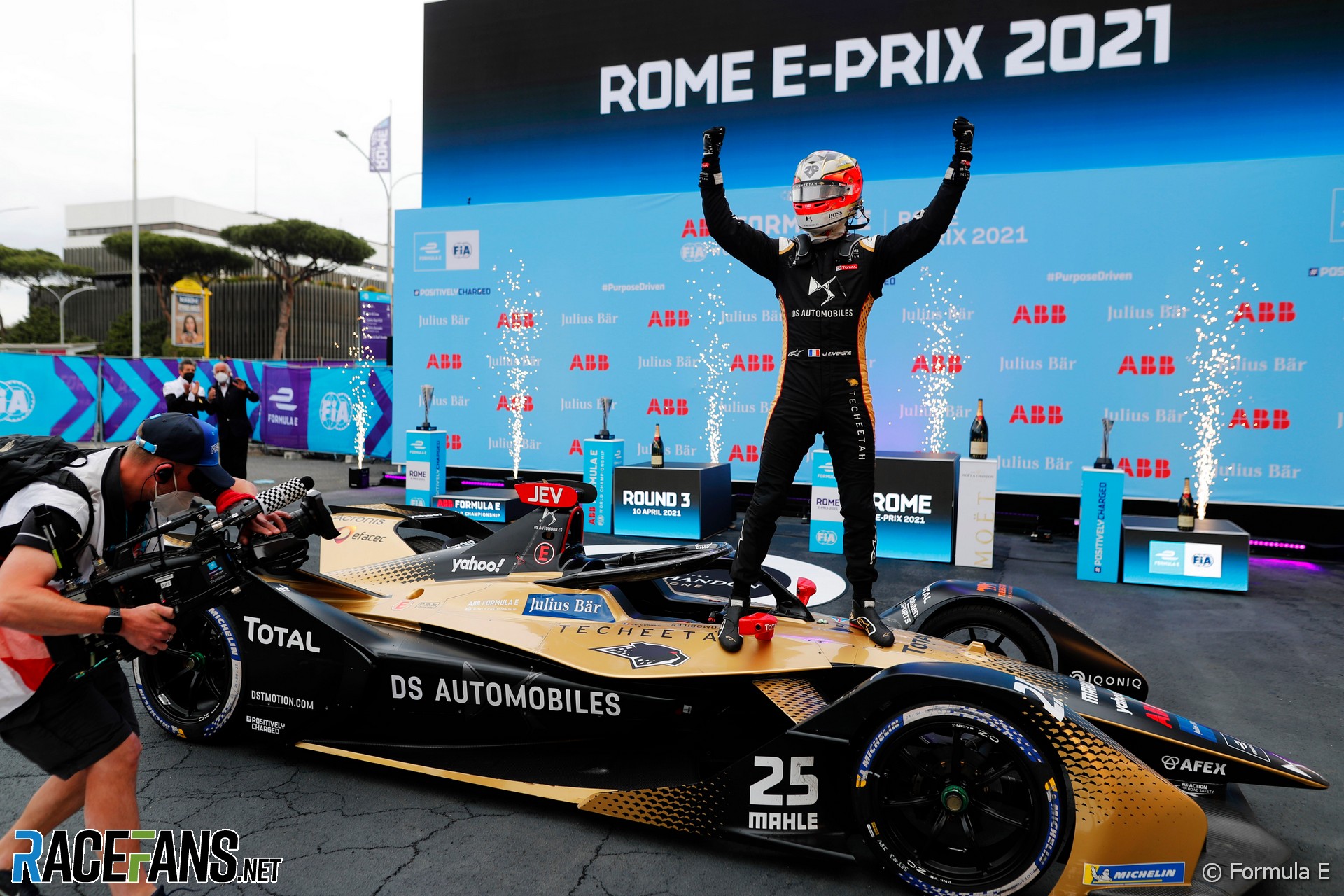 Jean-Eric Vergne scored his first victory of the Formula E season after his team rebuilt his car following a practice crash.

The two-time Formula E champion had scored no points in the first two rounds in Diriyah, then was involved in a bizarre collision with Oliver Turvey at the end of first practice this morning, which left his Techeetah team having to frantically repair his car for qualifying.

The race started in relatively cold conditions, for Formula E; just 15ºC air temperature and 17ºC track temperature. Additionally, mixed conditions meant the race started behind the safety car. After five minutes the race began and pole-sitter Stoffel Vandoorne was able to get away with the lead with André Lotterer in hot pursuit.

Lotterer and Vandoorne collided, clumsily, into the TecPro barrier at turn four, both slipping down the order and handing the lead to Oliver Rowland, who was himself under investigation for power over-use. He managed to get a slight lead but was rapidly under pressure from Lucas di Grassi.

Rowland was given a drive-through penalty with 33 minutes to go. Di Grassi inherited the race lead but with Jean-Éric Vergne and Robin Frijns hot on his heels. Vergne made a bold move on Di Grassi into turn four, the same place that Lotterer and Vandoorne had collided but the two escaped unscathed, Di Grassi breaking away with the lead while Vergne fell into battling with Frijns.

Sergio Sette Cåmara also received a drive-through penalty for energy overuse, after having stopped on track with what suspected powertrain problems.

Vergne was the first to go for Attack Mode, with the activation having serious consequences here, in a close train of cars. He slipped from second to fifth but knowing that the cars ahead of him had to do the same thing shortly. Di Grassi and he swapped the lead back and forth, between their respective Attack Mode

Jake Dennis retired from the race with 11 minutes to go, creating a brief yellow flag period but it failed to tone down Di Grassi and Vergne’s tussle. Both out of Attack Mode activations, they were still close to each other by the time Sam Bird – who had started the race tenth – managed to pass Nyck de Vries for third place.

Di Grassi dove up the inside of Vergne at turn four, in a move that looked impossible to complete but he managed to avoid the barriers and hold the lead, despite Vergne continuing close behind. The pack had never spread out and the gap from first to fourth was only just over a second and a half, with six minutes to go.

With just under five minutes to go, however, Di Grassi suddenly slowed, slipping backwards down the order on the uphill straight. Almost simultaneously, Vandoorne hit a manhole cover that sent his car off-course and the Mercedes drivers both collided, Vandoorne ending up embedded in the wall and a Full Course Yellow procedure starting.

Vandoorne’s car could not be retrieved and the race ended behind the safety car for the second time this season, Vergne taking his first win of the season and with Jaguar’s Sam Bird and Mitch Evans behind him, taking Jaguar’s first double podium.

Formula E’s next round is tomorrow, on the Rome street circuit again. Sam Bird has taken the lead of the championship, from Nyck de Vries.