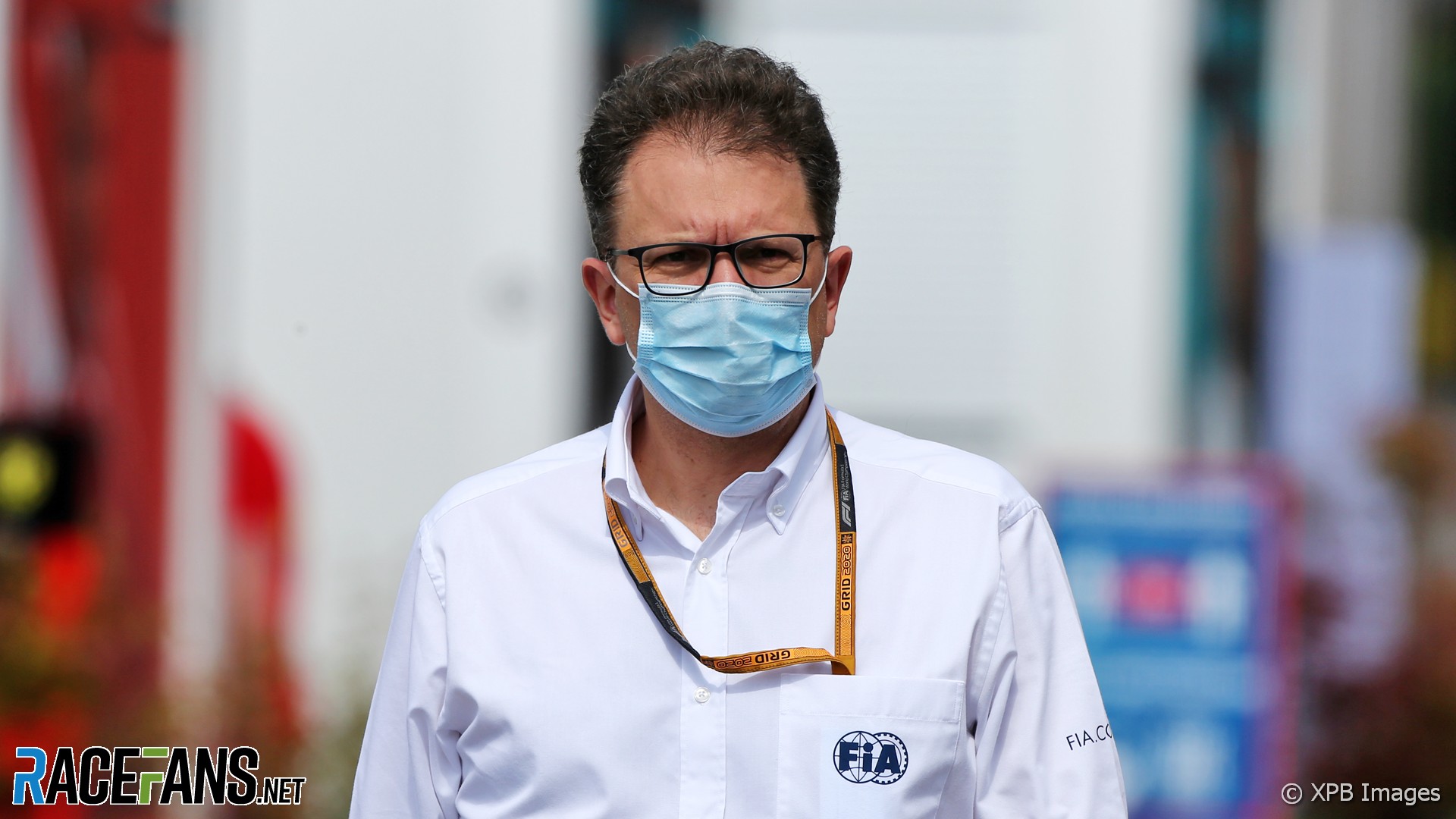 The team had taken the art of copying – excuse the oxymoron – to new heights, effectively building a replica of a Mercedes, allegedly by way of various photographic technologies. The long-term implications for the sport were potentially massive had a ‘not guilty’ verdict been handed down: how long before the F1 grid consisted of two originals and anything up to 18 (or more) copies?

Copying in F1 is, of course, not new. Back in the sixties a number of replica Coopers and Brabhams (dis)graced grand prix grids. In 1978 the London High Court found that the Arrows FA1 was effectively a copy of a Shadow’s DN9 – no surprise given the engineering team had defected from the latter team to the former. More recently, McLaren’s 2007 ‘spygate’ controversy saw the team fined $100m for using Ferrari’s intellectual property.

The legal sharing of components moved up a gear in 2009 when Force India (precursor to Racing Point and thus Aston Martin) signed a rear-end supply deal with McLaren, for effectively a full Mercedes powertrain, including gearbox, which permits the use of out-sourced rear suspension components, in turn facilitating similar geometries. This transferred to Mercedes when the company entered F1 in its own right.

Haas shifted the out-sourcing process into overdrive by taking it a step further by sourcing permitted components (see ‘non-listed’ parts below) from Ferrari, with Dallara producing the rest. Then, as revealed here in December last year, Ferrari has established a design office in Maranello specifically to supply Haas with technical and design services.

Modern technologies have made full-on one-on-one replicas the work of a relative moment. The flipside is developing new car designs for each new season is horrifically costly, hence previous budgets of $400 million (without engines). So F1’s regulators permit (and, in certain areas, encourage) co-operation between teams. However, ‘reverse engineering’ via photocopying was never the intention, nor is it in the spirit of the sport.

Listed team components (LTCs) – those parts to which teams are required by the regulations to hold the design rights – are defined as the monocoque, survival cell, front impact structures, roll over structures, bodywork, wings, floor, diffuser, and – from 2020 – brake ducts. Note: front and rear suspension components are not included; thus these may be shared or copied.

The sharing of ‘non-listed’ parts – to which teams need not hold the IP – among teams under current regulations has resulted in a number of technical alliances: ‘in-house’ as that between Red Bull Racing and sister AlphaTauri; the Mercedes/Aston Martin deal (there are shareholder links), or the straight-forward design and sourcing agreements as prevails between Ferrari and Haas.

That ultimately means eight out of 10 teams have some form of alliance – Mercedes with two partners, Ferrari the same, and Red Bull/AlphaTauri. Alpine (formerly Renault) and McLaren the odd ones out. McLaren sources Mercedes power units, but draws on its own transmission and full suspension designs – and thus shares no geometries with Mercedes.

Despite the brake duct verdict there are, however, concerns that data and methodology could potentially be shared within the respective three groups. In particular, the sharing and exchange of consultancy services, set-up and run data, strategies and the methodologies of operating cars with shared components to the detriment of the two ‘independents’.

The issue was first raised by Renault in a request for clarification – a copy of which was seen at the time by RaceFans – to the FIA in August last year, shortly after the brake duct verdict was handed down. The FIA duly responded in late October – the elapsed time seemingly pointing to the complexity of the matter – with its reply circulated to all teams under the guise of TD43/20.

The technical directive, details of which were shared with RaceFans, outlines exactly what is (or not) permitted, with, for example, the FIA stating that the sharing of data – more specifically tyre modelling, contact patch force, thermal dynamics, wear characteristics and tyre shape/deformation is “not acceptable”, even where teams share the same software.

Also deemed “not acceptable” is the sharing of ride heights, yaw, steer, roll, exhaust-blowing, tyre shapes (with the exception of data provided by the tyre supplier) plus a host of additional data, including LTC dimensions and geometries. This listing is by no means complete, but these extracts illustrate the extent of the challenge facing the FIA in controlling the flow of data between teams.

The five team bosses present in Friday’s FIA press conference expressed their confidence in the governing body’s controls when asked to comment by RaceFans. “We’re confident the FIA will monitor [the situation] very closely and will make sure that the rules are executed as they should be,” said McLaren Racing CEO Zak Brown.

However, he added, “We’re an independent team [and] are of the view that everyone should be a constructor. There is obviously the ability to collaborate, but we just have to have our trust in the FIA; that they’ll monitor the situation and make sure the rules are followed accordingly.”

Red Bull team boss Christian Horner added: “Last year we saw the regulations stretched to the limit of what’s feasible and what isn’t, and I think the FIA are acutely aware and again, as the governing body, you have to trust in them to police [it] accordingly.

“The FIA need to be on top of ensuring that no team artificially benefits through that of a customer or affiliate or associate team. It’s something we at Red Bull take very seriously, and the relationship with AlphaTauri has scrupulous discipline to how we operate, respectful of those rules. Of course you trust in the governing body to police those and enforce those accordingly.”

However, despite expressions of confidence in the governing body, concerns remain that some areas – particularly with respect to set-up and car run data – may not be totally controllable. A number of team personnel privately shared their doubts with RaceFans during and after testing. For the avoidance of doubt, these concerns were aired by personnel from both inside and outside teams with alliances.

Clearly, then, there is a potential issue, certainly in the opinion of a senior team member, who told RaceFans: “[Team X] continue to get suspension geometry data from [supplying Team Y] and [Team Z from Team A]. The fans and FIA are being fooled to believe there are 10 constructors on the grid.

“This is only the tip of the ‘copying iceberg,” he concluded.

Then on the Friday of the Bahrain Grand Prix weekend the stewards issued Document 15, which announced: “In order to complete deeper technical checks of cars in the championship, the technical delegate will routinely and randomly select one car at each event following the race for deeper disassembly, conformity checks and checks of software and systems.”

The document continued, “Additional checks may also be carried out on the competitor’s other car,” concluding with, “The stewards emphasize that while this is a new procedure in this championship, it is routinely carried out in other FIA world championships and competitions.”

On Friday evening the FIA’s head of single seater technical matters Nikolas Tombazis met with a select group of journalists – including RaceFans – in the circuit’s ‘mix zone’ to outline the rationale and methodology of the random checks.

“All teams are deeply suspicious of their competitors, that maybe team X or Y is doing something,” he said. “I’m sure that on occasion, maybe some things may have happened below our radar.”

He stressed that there are no existing suspicions but added: “It’s good practice to start checking the cars a bit more thoroughly. We had to inform the teams in advance [of checks] because there are a few things that need to be organised in order to do it properly.”

Tombazis told the group that the first car to be checked had already been selected via a random [number drawn from a hat] process, although he was obviously not at liberty to divulge which entry had been selected. (In the event was Valtteri Bottas’s Mercedes, which was cleared after the checks.)

“That car will be fast-tracked through the platform and weighed so that it’s back at the team’s garage as soon as possible,” Tombazis explained.

“There [will be] two or three people from the FIA there to start with, and the teams will have to follow a step-by-step process. The FIA people will finish the [usual] post-race [checks] and join them. We will start with two or three and end up with five or six people there,” he revealed, adding, “We have increased our resource a bit in order for us to improve and do things better.

“Sometimes we’ve wanted to do a better job and we haven’t had the resource. Yes, we still rely on whistle-blowers, there’s always that mechanism, so everything that has happened in the past is still possible. But we think [this is] giving an extra little element.”

Although mainly a technical inspection, Tombazis said information thus obtained could also assist the governing body in auditing compliance with the financial regulations, aka ‘budget cap’.

“We would be doing this work anyway, unrelated to the cost cap,” he said. “Teams have to declare in their cost cap the inventory they use. A car has 15,000 pieces on it and we can’t check 15,000 pieces. But we can check 50 random components are on the list, and keep them honest in that way.

“So there’s an element of cost-cap related check, but the primary focus is a technical check.”

The latest checks should eliminate some of the paddock distrust, although sources are doubtful whether such random checks will reveal any set-up or data sharing. However, increasingly stringent controls can only benefit the sport in the long run, particularly as 2022’s regulations permit increased component sharing – and thus potential for data sharing. The issue is to ensure it does not unfairly penalise the independents.

“There will be some infrastructure that’s being shared within the regulations and obviously that creates the positive effect of economies of scale, [of] revenue streams for the bigger teams and fantastic state-of-the-art facilities for the other teams,” Mercedes Motorsport CEO Toto Wolff told RaceFans in Bahrain.

“But we equally recognise a situation like McLaren [and Alpine] has, that this needs to be, in a way, ring-fenced in terms of the regulations, so there’s absolute clarity what’s on and what’s not.”

The governing body has no easy job for it is tasked with monitoring 10 teams who employ amongst the brightest engineers on the planet, each of whom is (highly) paid to find legal loopholes in the (extremely complex) regulations that pertain to those 15,000 parts. The FIA’s task is further complicated by a constant flow of ever-more sophisticated technologies and compounded by acute levels of paranoia amongst teams.

Paranoia is, of course, one thing but incontrovertible proof of cheating is a different matter entirely. The good news is that the FIA has increased its ‘policing’ resources, and hopefully prevention turns out to be better than the need for high-profile punishment. Regular cross-referencing of operating data across allied teams – on a similarly random basis – should put to rest all suspicions, and above all, “keep them honest.”

31 comments on ““Things may have happened below our radar”: Why the FIA needed new powers to keep F1 teams honest”