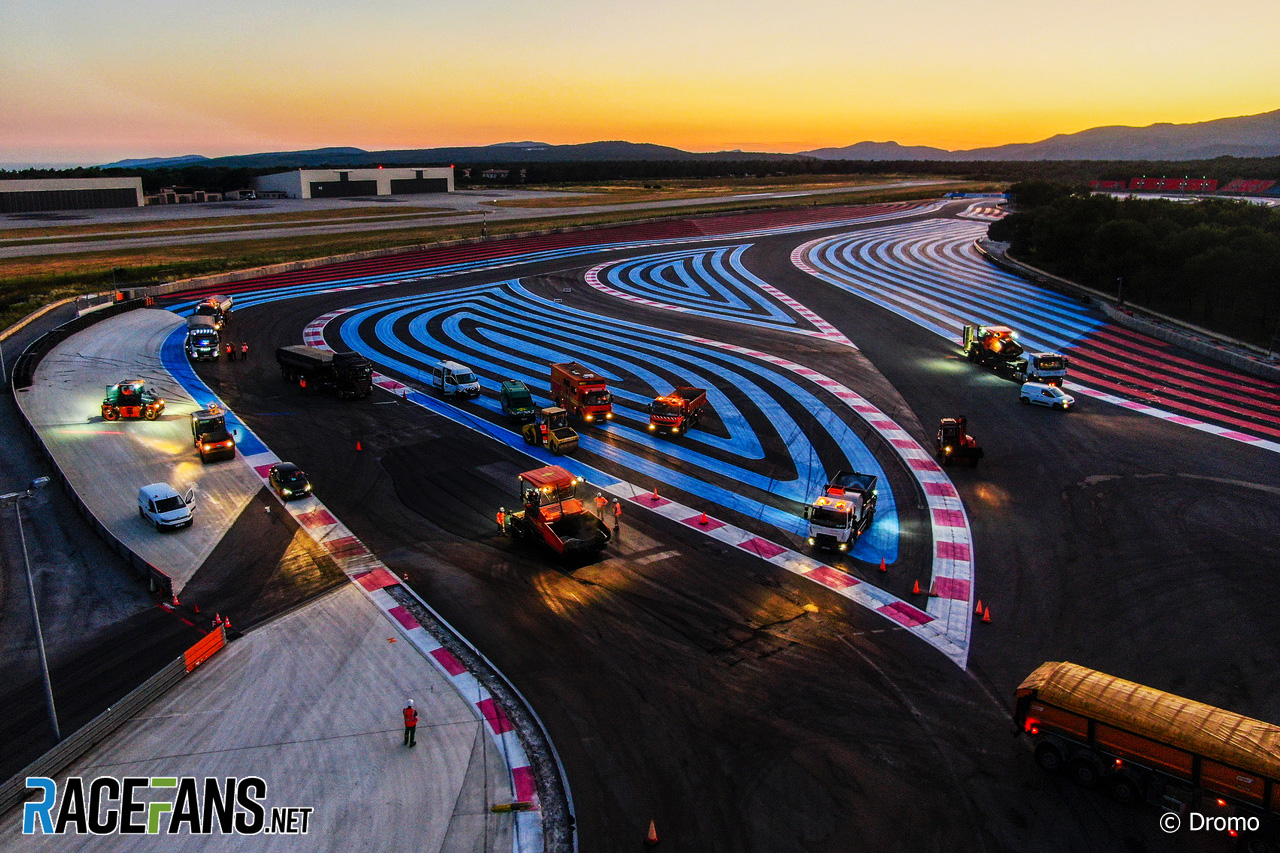 The Paul Ricard circuit has undergone an extensive resurfacing and reprofiling programme which it is hoped will aid racing in this year’s French Grand Prix.

The changes cover 70% of the track’s 5.8-kilometre length and all of its 15 corners except the high-speed right-hander Signes (turn 10). Studio Dromo, who handled recent track renovations at Zandvoort and Silverstone, were enlisted to plan and oversee the changes, which were completed in June.

As with their 2019 reworking of Silverstone, Dromo had to work within the confines of the existing track layout. Plans revealed last year to alter the first sector to aid overtaking have been put on hold.

“We had the requirements to fix some corners from an asphalt perspective and while we were there, we said ‘OK, let’s do the maximum that we can do within the boundaries that we have’,” Dromo owner Jarno Zaffelli told RaceFans. “It was more or less like Silverstone, we had to stay within that layout.”

“We applied the same methodology that we applied before in Silverstone,” he explained. “We reprofiled all the corners that we basically resurfaced. The only one that was not reprofiled was turn 10, the other ones were just slightly changed.

The “most dramatic change” has been made at turn five, a slow right-hander from which the drivers accelerate towards one of the best overtaking opportunities on the circuit. The corner now has more of a crest in the middle that “was done for drainage purposes”, but which also presents more of a challenge to drivers as it lies “exactly in the middle of the racing line”.

Turn seven, which brings drivers onto the Mistral straight, now has a more progressive transition in camber. “It is before a long straight, so the grip in that particular corner will be key for the speed arriving in turn eight and preparing the overtaking there,” explained Zaffelli.

In general, F1 drivers should find the track much smoother than it was when they last raced there in 2019.

“Definitely they will feel it’s much, much less bumpy in the newly-resurfaced area. In the parts that we didn’t do it – mainly straights – they will feel the bumpiness that was and when they go in the black area they will feel much smoother than before.

The pit lane entrance has also been resurfaced and a bump removed.

Another limitation on how far the track could be changed came as a result of a request from Formula 1’s official tyre supplier. Much of Pirelli’s development work for next year’s new, 18-inch tyres was conducted at Paul Ricard, and they wanted a similar asphalt mixture to be laid so they can continue to generate relevant data at the circuit.

“They kindly requested us to try to improve what they have but, in terms of asphalt, to keep something very similar,” said Zaffelli. “So we did exactly that.

“We improved it in terms of quality in construction. But in the end, the teams, they will find an asphalt that, even if it’s slightly darker because it’s newer, will feel absolutely the same as the asphalt before. So that was important because it’s used like a proving ground, not only a racing track.”

Paul Ricard was redeveloped as a dedicated testing facility in the nineties. Several advanced features were installed at the time including an automatic sprinkler system. During their work Dromo also uncovered a development of an artificial track heating system on the Mistral straight approaching the chicane at turn eight. These features increase the complexity and cost of any redevelopment work, another reason why more significant changes to the track have been delayed.

Despite the restrictions they had to work within, Zaffelli said there was considerable scope for improvement, and is hopeful the resurfaced track will prove to be a change for the better when F1 returns in June.

“When we arrived there, there was a [very] high amount of small refinements and tweaks that we can implement that we tried to do. The focus was really that at this stage. This was done and we were happy with the results.

“But now we need to see Formula 1 coming there. It is changing the regulations, it’s changing a lot of stuff. So it will be very interesting to understand if the geometric modifications are doing a difference like they did in Silverstone.”