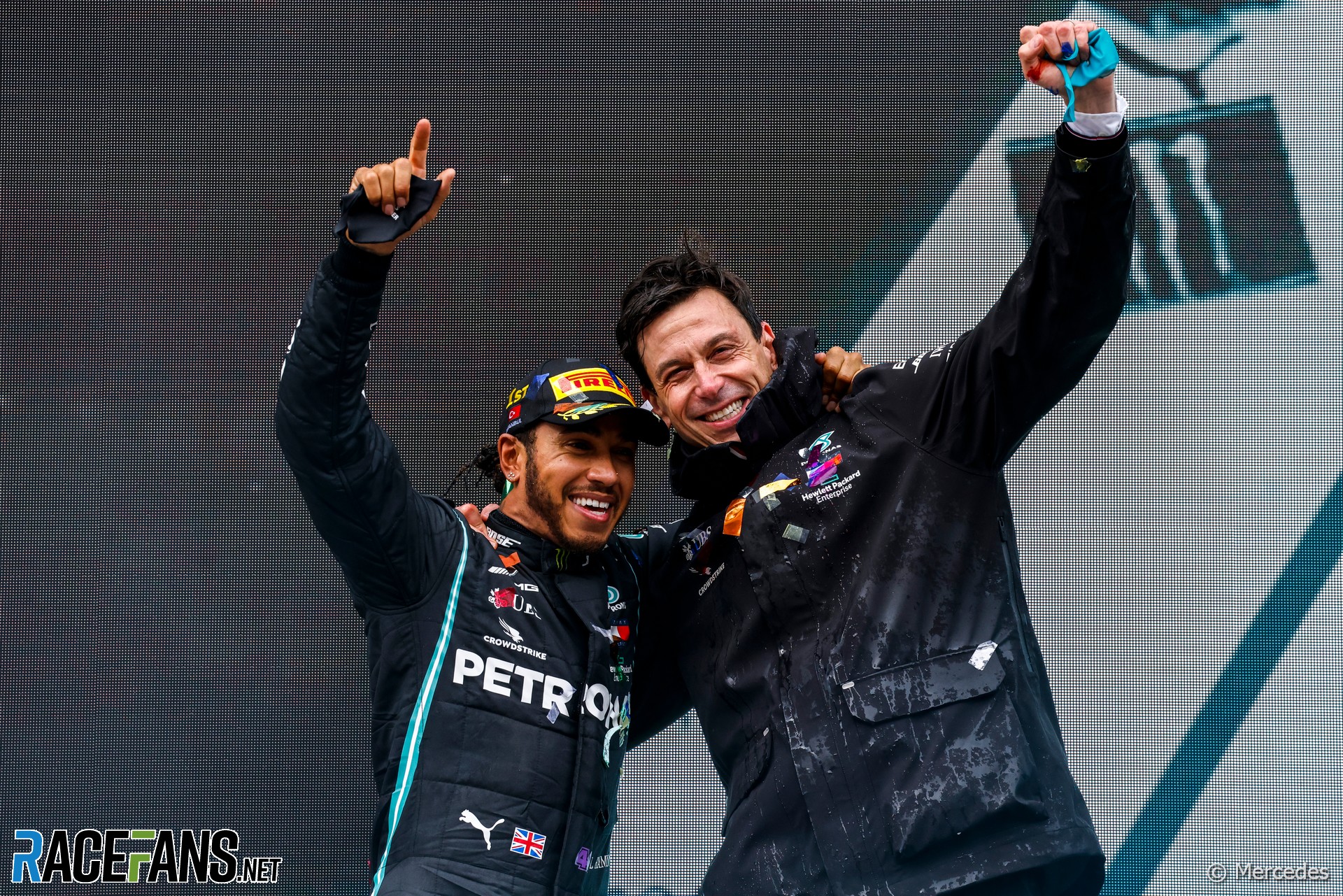 Mercedes team principal and CEO Toto Wolff has explained why Lewis Hamilton only extended his contract to drive for the team by a single season.

Wolff also dismissed claims Hamilton demanded a power of veto over who his team mate can be – referred to by some as a ‘Verstappen clause’ – and that he had demanded a share of the team’s earnings from Formula 1 because of the attention he brings to the sport.

Mercedes announced today the seven-times world champion had signed a new deal to continue driving for them. However, following three multi-year contract with the team, Hamilton has only signed a one-year contract extension for 2021.

Wolff said they “jointly agreed on a one-year deal” after delays to their discussions led them to postpone agreement on 2022 and beyond.

“First of all there is a substantial regulations change in 2022,” Wolff explained. “We also want to see how the world develops and the company.”

Their negotiations were disrupted by the late end to last season and Hamilton’s Covid-19 diagnosis in December.

“Because we kept it very late, we wanted to discuss the contract at the end of the season between the Bahrain races, and then Lewis obviously didn’t feel well. At the end we started out negotiation conversation just before Christmas.

“It was important to get it done as soon as possible and in that respect we thought let’s postpone the discussion about 2022 an onwards to a later stage in 2021.”

Despite the late timing of the agreement, Wolff said there was never any doubt on either side that they would agree a deal.

“There are uncertainties in the world that affect the way the sport can operate that have an influence on our revenue, on TV monies, on sponsorship income,” he said. “Daimler and Mercedes are in a huge transformation towards electric mobility and that means investments. So we are living in a financial reality that is very different to what it was a few years ago.

“But having said that we are totally in line, Lewis and me and the wider group in Mercedes, about this situation. So there was never any discrepancy in opinion. It was just that we felt we’ve got to put signature on the 2021 contact because we need to get going and then find some time during 2021, earlier than this time around, to discuss the future.

“And it’s not only specifically to 2022 but also beyond and that is not something that we wanted to carve out via videoconferencing between Christmas and the end of January.”

Reports elsewhere claimed Hamilton had demanded the power of veto over Mercedes’ future choice of team mate, and that he pushed for a share of the team’s earnings from Formula 1’s revenues. Wolff rejected both rumours.

“On the specific clauses that were out there in the media, I don’t know where that came from because none of that is true,” he said.

“I actually read about this, I found it an interesting perspective, but the truth is there was not a second of discussion about any driver-specific clause. He has never asked for that in the last eight years and it’s a team decision.

“The other clause about a revenue split or revenue share… that rumour was baseless too, so none of that was ever part of our discussions.”