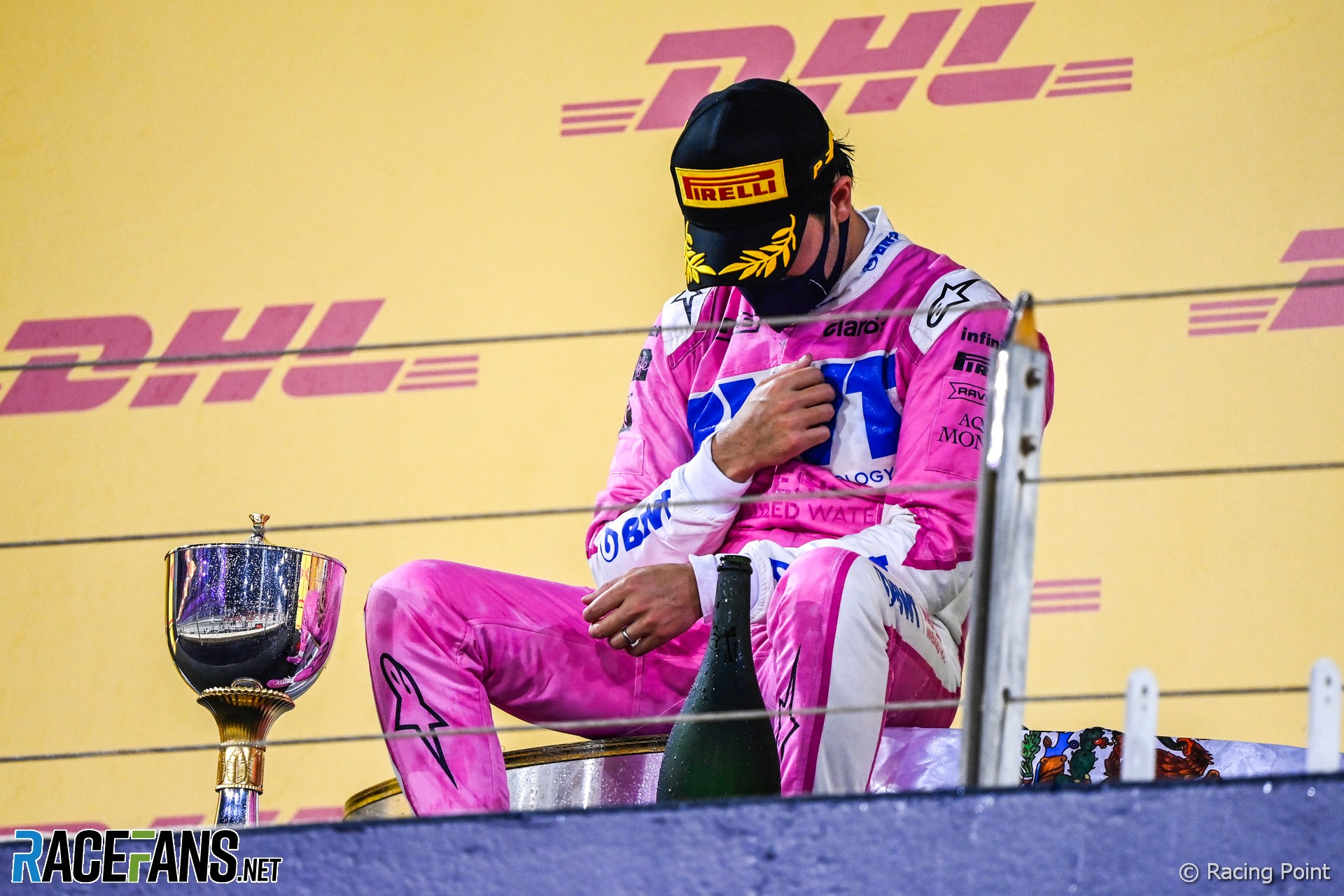 Sergio Perez starred in both Bahrain races – but only got the result he deserved in one of them. Here’s our verdict on the best and worst weekend performances from F1’s double-header in Sakhir.

Having out-paced his team mate by the best part of half a second in Q2, Perez was the only Racing Point driver to reach the top 10 on the grid. From there he ran a convincing third all evening until suffering an MGU-K fault which caused a fire, costing him and the team a valuable points haul.

It’s rare for a driver who started and finished behind their team mate to get a ‘star’ accolade, but Sainz performed brilliantly against some poor luck to climb from 15th to fifth for the second race in a row. A brake-by-wire problem halted his progress in qualifying, and his pace was better than Lando Norris’s for much of the race. His passes on the Renault pair also stood out.

While Perez continues to shine, Vettel’s tough final season at Ferrari goes on. He followed a Williams home in the first Bahrain race.

Nearing the end of his first full season in Formula 1, Latifi continues to lag well off George Russell’s pace. The subsequent round may have cast Russell’s abilities in a new light, but even so Latifi was almost nine tenths of a second slower. His race was somewhat better, as he benefitted from drivers who attempted to run long final stints who then had to pit.

And the rest: Bahrain

Romain Grosjean deserves a special mention for surviving the appalling crash which cast a pall over the race. Daniil Kvyat deserved no blame for the collision which led to it.

The stewards dealt somewhat harshly with Kvyat’s subsequent tangle with Lance Stroll, which inverted the Racing Point. Having had a run at his rival from the previous corner, Kvyat had reason to expect Stroll wouldn’t take the apex so uncompromisingly on the first lap of the race.

Lewis Hamilton’s tyre management in qualifying earned him a brilliant pole position which left his team mate mystified. Valtteri Bottas was luckless in the race, picking up two punctures, and Max Verstappen did his best to give chase as Hamilton collected his fifth win in a row.

Having trailled Perez all night, Alexander Albon was fortunate to inherit the final podium position from a driver many are tipping to take his place next year. Norris moved up to fourth as a result, having passed the one-stopping Pierre Gasly.

The AlphaTauri driver was fortunate to come in sixth behind the other McLaren, as without the late Safety Car period he was in serious danger of being passed by Daniel Ricciardo. The interruption also halted Bottas’s recovery.

Ricciardo lost time behind team mate Esteban Ocon earlier in the race before the team ordered him aside. He came in 10th ahead of Charles Leclerc, whose tyres wilted badly at the end.

George Russell probably got the best he could out of the Williams after another excellent qualifying performance, though he again struggled to get the FW43 off the line.

It’s hard to disagree with Russell’s assessment that victory was taken away from him twice in his first race as Hamilton’s substitute. Having nearly beaten Bottas to pole, the newcomer passed him at the start and led convincingly. Then a shambolic Safety Car pit stop dropped him to fifth at the restart. Even then he had a good chance of winning after using his fresh tyres to pass Bottas, Stroll and Ocon. But as he closed on Perez a slow puncture developed, forcing yet another pit stop, leaving him ninth.

As usual Perez was Racing Point’s top qualifier. He also made a brilliant start and was already up to third when Leclerc sent him spinning. Having fallen to 18th, Perez ripped past the slower cars after the restart, so that by lap 11 number 11 was 11th. His pass on Albon 10 laps later was vital, as it allowed him to draw close enough to the leading group to take advantage of their pit stops. He used a tyre life advantage to get past Stroll and Ocon, which became the lead of the race after Mercedes’ calamities.

This was a disappointing weekend after the promise he showed a week earlier. In a car which was less well-tuned to the faster track layout, Albon was far from his team mate’s qualifying pace and went out in Q2. In the race Albon was unable to contain the recovering Perez, and although he passed both AlphaTauris after switching to fresher tyres, he made no further gains and ended the race sixth.

The most experienced driver in F1 didn’t seem to gel with the Bahrain Outer circuit. He was over four tenths of a second off his team mate in qualifying – quite a margin at such a short track – and spun at the start of the race.

And the rest: Sakhir

An error at the start of practice left Bottas running what he called a “Frankenstein floor” on his car for the rest of the day while Russell headed the times. He took pole position but lost the lead at the start. Bottas was edging towards Russell when the fateful pit call which spoiled their races was made, and with his old, worn tyres was unable to prevent a series of cars passing him at the end.

Verstappen was taken out of the race by Leclerc. The Ferrari driver’s turn four move was so poorly judged he’d be on the ‘Strugglers’ list if it hadn’t been for his sublime qualifying effort on the only set of new tyres he had for Q3.

Ocon found a way past Stroll for second, having been able to run a longer first stint as he didn’t make the cut for Q3 and could start on new tyres. Stroll also lost out to his team mate, but bagged his second podium finish of the season.

They gained at the expense of Sainz and Ricciardo, who fell to fourth and fifth respectively. Kvyat deserved better than seventh after one of his better drives of the year, while his team mate unusually slipped out of the points over the final laps.

Lando Norris posted his worst qualifying performance of the season on Saturday. After taking a new engine and dropping to 19th on the grid he took advantage of his soft tyres at the start, rising to 10th, but made no further progress by the end of the race.

A poor pit stop left Vettel 12th, followed by the Alfa Romeo pair. Giovinazzi, who doubted there was much better than 13th in the car, finished ahead of Raikkonen.

The race’s two debutants had mixed events. Pietro Fittipaldi qualified last but due to his engine change he mainly served the purpose of giving Kevin Magnussen a tow. He had fallen 25 seconds behind the pack when the Safety Car came out.

Jack Aitken’s first F1 race was a peakier affair. He got within a tenth of a second of his team mate in qualifying and won a spirited tussle with Kimi Raikkonen to stay ahead of the Alfa Romeo, but spun into a barrier on lap 60. He was able to pass Fittipaldi before the finish.

Of their team mates, Magnussen found the Haas a less competitive prospect than usual and was 15th, while Latifi was forced out by an oil leak.

Vote for the drivers who impressed you most in the last two race weekends and find out whether other RaceFans share your view here: