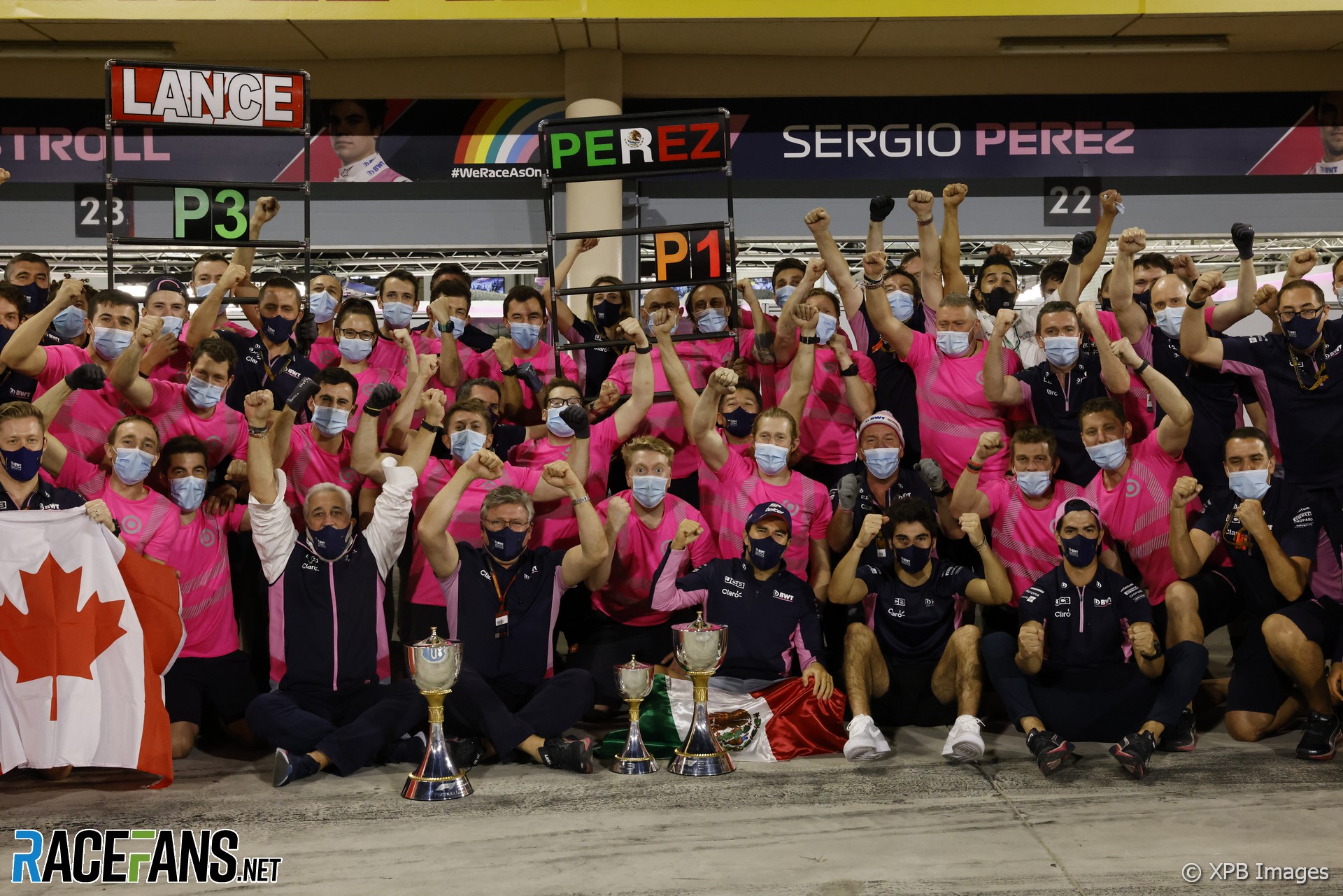 I planned a quiet period for the ‘off days’ between the Bahrain and Sakhir Grands Prix, having pencilled in only my weekly RaceFans column, some news snippets and completing my regular commercial and political analysis of the season for the Autocourse annual.

I’d been invited by Stephane Cohen, CEO of Bell Racing Helmets to visit their factory based on one the circuit’s perimeter roads. With Al Areen Wildlife Reserve – home to a variety of desert species including oryx and cheetah – situated close by I figured I’d combine business and pleasure while also having a mandatory Covid swab taken at the circuit’s test station between the two visits.

However, the schedule markedly changed after Romain Grosjean’s Haas speared into the barriers on Sunday and Lewis Hamilton was diagnosed with Covid-19 on Tuesday.

These unforeseen events sparked off a whirlwind of unexpected driver changes, the likes of which F1 seldom sees in such quick succession: George Russell to Mercedes, Jack Aitken replacing him at Williams and Pietro Fittipaldi subbing for Grosjean.

Add in (unrelated) 2021 confirmations of Nikita Mazepin and Mick Schumacher at Haas, and suddenly all plans for a relaxing period flew out of my 17th floor hotel room quicker than Grosjean’s Haas turned into a fireball.

The obvious casualty was Al Areen, and more’s the pity. At least I won’t have to wait long to return: We’ll be back to Bahrain in three months’ time for round two on the 2021 F1 calendar. 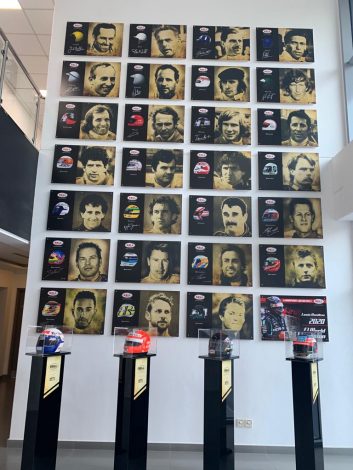 The visit to Bell was nothing short of fascinating, and not only on account of observing the production processes at close quarters. Stephane invited me up to his office, lined wall-to-wall a magnificent array of ‘used’ helmets – from an original fifties open-face through Jacky Ickx’s dark blue full face to a complete collection of Ayrton Senna designs.

A helmet essentially consists of inner and outer shells, with the former designed to absorb impact and the latter to prevent penetration by foreign objects. The inner shell comprises two (patented) foams to facilitate progressive absorption in critical areas, while the outer needs to provides protection while being flame resistant and as light as possible to reduce G-force loadings.

Add in different sizes and styles – open and full face – and the varying specifications for different series plus a spread of affordability levels, and it is little wonder that Bell’s systems track over 7,000 different part numbers – in order to produce 30,000 helmets per year. Affordability does not, though, means sacrificing safety: all Bell helmets comply with prevailing safety regulations, all of which are under constant review.

A large part of Bell’s revenues is derived from the sale of mini-helmets, being the largest producer of these collector items, and not only on behalf of the 11 current F1 drivers who race with Bell, but also under contract for other brands. During my visit the assembly line was churning out mini versions of Pierre Gasly’s Monza-winning design despite the Frenchman being contracted to Arai.

My most profound take-away from the visit? The comment that, “The actual working cycle of a helmet is a split-second, and during that time we discover whether it has worked as intended.” Then Stephane explained how Romain’s helmet had done just that last Sunday – and perfectly so… 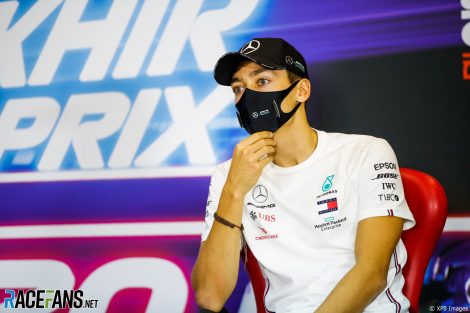 After this flurry of activities Thursday’s media sessions were relatively mild, albeit filled with intrigue. Would Russell thrash Valtteri Bottas, we wondered, and if so, how would the market values of both contracted Mercedes drivers be affected; how would Aitken and Fittipaldi shape up against their more experienced team mates?

The late time schedule for what is a full-blown night race means ‘late to rise; late to bed’ schedules not unlike those followed for Singapore, albeit not as extreme. Still, the event could as easily start at 6pm rather than 8pm given Bahrain’s winter darkness falls early – recall last week’s race. Such timing would make timing more amenable for Australasia, but Liberty seems obsessed with US ratings.

Arrived at the circuit at around 2pm, timing my travel according to F2 sessions. With the title battle going down to the final day, the support series did not disappoint, with two cracking races.

Time between F1 track sessions was spent in conversation with the team personnel who were kind enough to make the walk to the sterile ‘mix zone’ outside the media centre. I’m told, though, that we could have (controlled) paddock access in Abu Dhabi, and about time, too. 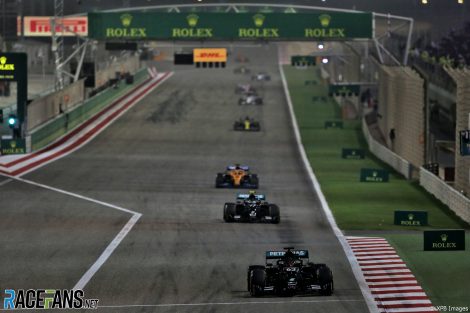 Same timings as previous two days, with the major snippet, though, being that F1 has agreed its pre-season test dates after much wrangling over choice of venue – Barcelona or Bahrain. Both have positives – the former primarily due to proximity to team bases; the latter offers dependably warmer weather. Liberty is said to have offered a stopover in Bahrain en route to Melbourne for the season opener to reduce costs, but that failed to swing it.

Instead, teams will spend up to $50,000 each in trucking costs by travelling to and from Spain, with unsuitable weather being a potential risk – crucial as only a single three-day test is scheduled for cost-saving reasons. The dates are March 2nd-4th.

Post-race, the talk was all about Russell’s lost shot at victory and how Mercedes blasted itself in both feet by taking unnecessary stops and losing victory for a driver who had previously failed to score a single point to date. At least the stewards played it leniently, and he was able to keep his first career points.

The last time Mercedes dropped the ball like this, at Monza, we had a new winner, and so it was here, with Sergio Perez grabbing his first victory in what will be his penultimate race unless someone puts his name to a contract for the 2021 F1 season.

Back in the hotel I start preparing for the trip to Abu Dhabi, via a massive airlift of all F1 personnel. I’ll report back on all that and more after the season finale next week.