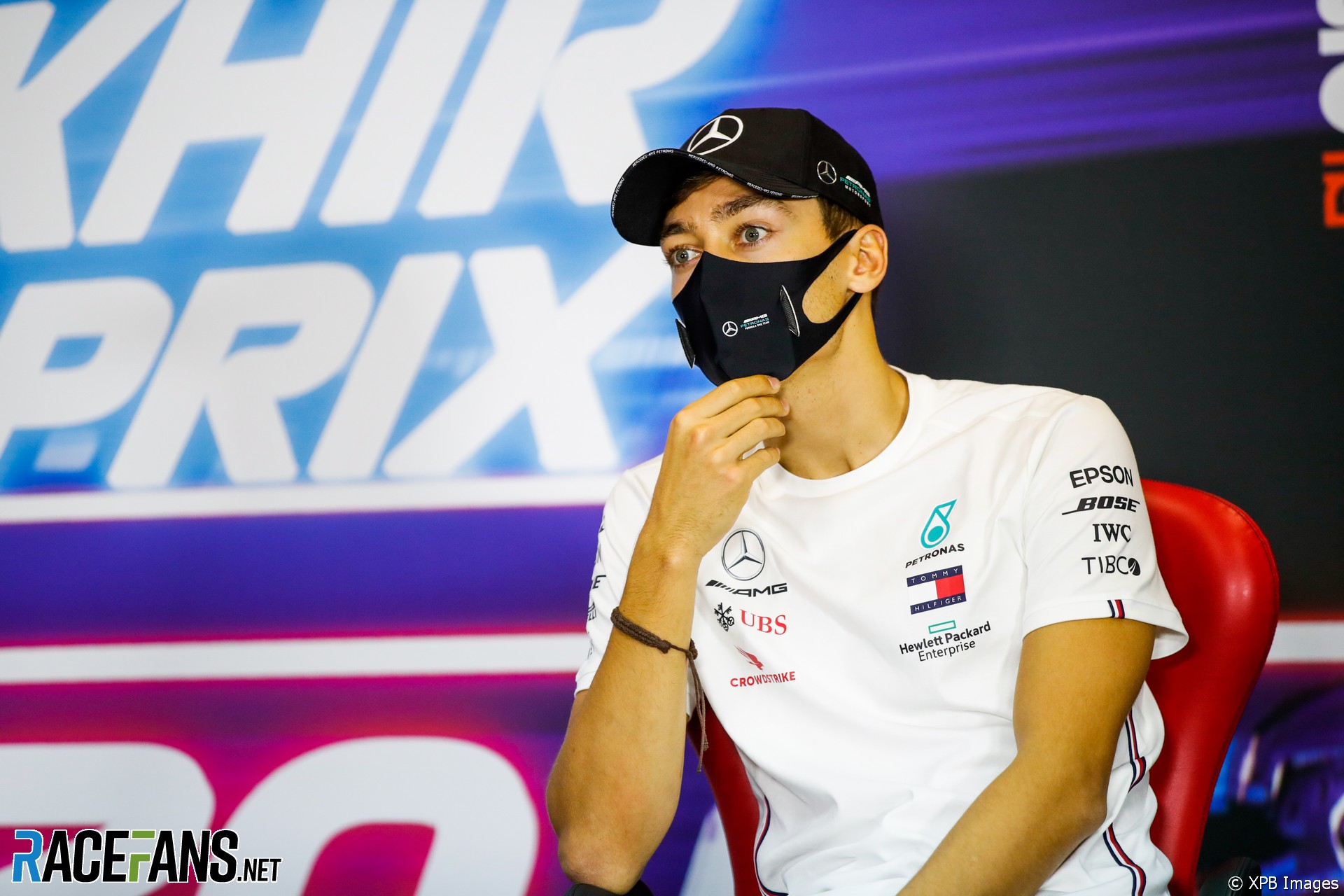 George Russell doesn’t expected to be rewarded with a full-time Mercedes seat solely on the basis of his performance as Lewis Hamilton’s substitute this weekend.

He has taken over from Hamilton for this weekend’s Sakhir Grand Prix after the world champion tested positive for Covid-19.

Speaking to media in today’s FIA press conference Russell said the reality of his sudden promotion from Williams hadn’t sunk in yet. “It’s all happened so fast,” he said. “It’s been an intense 48 hours.”

Mercedes team principal Toto Wolff called Russell in the early hours of Tuesday morning and told him he was their choice to replace Hamilton.

“I got a phone call from Toto at 2am on Tuesday morning. I was actually in the bathroom in the moment which was slightly awkward. I answered the phone, he said ‘George, are you in the bathroom?’, I said ‘Sorry, I am in the bathroom’.

“He said ‘Unfortunately Lewis has caught Covid, he’s doing well, he’s healthy and feels fine which is most important but we want you to drive’. I said ‘Right, OK’. Obviously a bit of a sleepless night.

“Then we made it happen throughout the following day. I had 64 phone calls on Tuesday pinging between so many different people. I’m glad we got there in the end.”

Russell was unsure whether Williams would release him from his contract to drive for the world champions.

“I was very anxious on Tuesday waiting to find out if we could strike a deal with Williams,” he said. “I need to say a massive thank you to them for allowing me this opportunity. And here we are.”

He has been a member of Mercedes’ junior driver programme since 2017 and has tested for the team previously. He will partner regular Mercedes driver Valtteri Bottas this weekend.

“It feels strange to be back with Mercedes,” said Russell. “Obviously I spent two years as their test and simulator driver.

“I know all of the guys which makes things a lot easier to get back into the team. I’m just being bombarded with information at the moment to learn ready for the weekend ahead.”

Russell said his target for this weekend is simply to “do my best” but predicted “it’s going to be incredibly difficult”.

“Valtteri has been pushing Lewis a huge amount over the years. I know it’s not going to be an easy task coming in.

“When you’re in the groove, you’re integrated into the team. The level I was at with Williams just having spent two years in the same car with my same engineers, same mechanics, changing suddenly there’s so many new things to learn.

“I’ve got no expectations, no targets. Just build up to it over Friday, learn as much as I can and just do my best.”

Hamilton is widely expected to sign a deal to remain with Mercedes for the 2021 F1 season and beyond. Bottas already has a contract for next season.

However Russell doubts his performance this will weekend will make any different to Mercedes’ short-term plans for its driver line-up.

“One race doesn’t define a driver’s capabilities or the decision-making for something that’s over 12 months away,” he said. “So from my side that is not even in the back of my mind.

“I’m going to go out there, enjoy it, learn as much as I can. Because obviously I have a job to do back on my return to Williams which is to try and push that team forwards as well, to maximise that learning from Valtteri, the team, whoever.

“In terms of the future, that’ll be judged over the course of the season and what’s happened in the past as well, not just one or maybe two races.”

“From my side I think there’s no pressure,” he added. “I’m being thrown in at the last opportunity. I haven’t driven their simulator in two years. My seat is three years old. I’ve got so much information to learn and going up against Valtteri isn’t going to be easy.”

Russell is around 10 centimetres taller than Hamilton, and revealed the world champion’s cockpit felt very cramped.

“It definitely was a tight squeeze. Also my size 11 feet were a struggle so I’m having to wear a slightly smaller shoe than is ideal. So that’s slightly uncomfortable but I’m sure I can endure the pain to get this opportunity.”