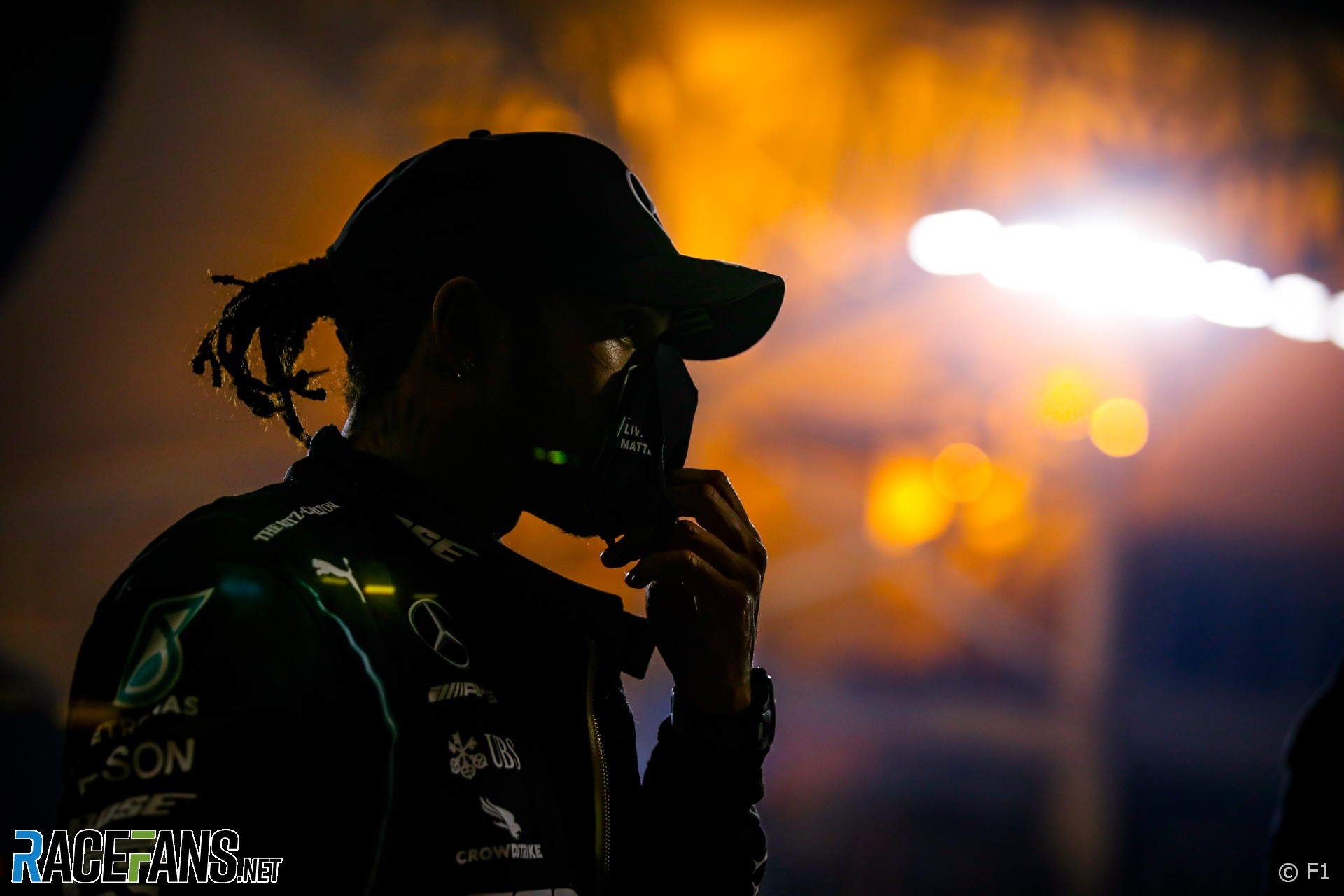 Had the Bahrain Grand Prix only consisted of the race which started on lap two – 90 minutes after the five red lights first blinked out in the Sakhir night sky – there would have been no shortage of talking points.

But of course there was only one story in this race, and it happened long before the chequered flag fell. It was the unbelievable fact of Romain Grosjean’s survival from an appalling crash, one which appeared to belong to another age.

Grosjean shouldn’t have been anywhere near Daniil Kvyat, for more than one reason. For one, the pair started nine places apart on the grid, but the AlphaTauri driver bogged down badly when the race began.

Accelerating out of turn three for the first time. Grosjean was confronted by a group of cars immediately ahead of him and Kimi Raikkonen bouncing through a gravel trap on his left. Avoiding that mess was the right move to make, but the speed with which he changed direction caught Kvyat alongside unaware.

The Haas’s right-rear wheel made contact with Kvyat’s left-front, twisting the VF-20 rightwards and pitching it into the air. From there the distance to a guardrail was short, and Grosjean was only on the ground briefly, leaving four thick rubber lines pointing straight at the Armco.

He was still doing 221kph when the data logger cut out on his car. A fearsome 53G force was registered.

The appalling footage from the crash scene suggests what happens next. An FIA investigation, which has already begun, will supply full details in due course.

The nose of Grosjean’s car drove between two sections of the barrier, levering it apart. The Halo – a mandatory addition to F1 cars since 2018, strong enough to deflect a 20kg tyre fired at 225kph – now faced arguably its toughest real-world test to date. A car-barrier collision of this type is exactly what it was designed to withstand, and the structure shielded its driver from an impact which otherwise would surely have been fatal.

But that was only the first life-threatening danger Grosjean averted. The barrier arrested the car’s progress with such force it wrenched the VF-20 in two. Fuel spilled from the breakage and insistantly exploded.

The crash scene resembled the twin horrors of sixties and seventies F1: An inferno and a mangled barrier. From the moment of impact, 28 seconds passed during which Grosjean unbuckled himself, crawled out of the inferno and climbed over the barrier into the clutch of the FIA Medical Car team and attending marshals.

Only those at the scene saw the full horror unfold in real-time. For television viewers, the first glimpse of Grosjean safe in the Medical Car came another two minutes later. It was only then that the unbelievable details of what had just happened to him began to emerge.

The 19 other drivers returned to the pits and lined up to wait for a restart which, it soon became clear, would be a long time coming. Some, like Sebastian Vettel, watched the crash footage only long enough to comprehend what had happened, then turned their eyes away. “I disagree with the fact that you have to show the images over and over again,” he said when it was all over.

Others, such as Daniel Ricciardo, were appalled to see how often F1 screened replays of the crash. “We’re lucky he’s here but it could have been a different story and to show it like it’s something from Hollywood, it’s not cool,” fumed the Renault driver.

Ricciardo’s future team principal, McLaren’s Andreas Seidl, remarked that “every driver is different in how he deals with the situation”, as Lando Norris and Carlos Sainz Jnr had watched the coverage.

“Our two guys were sitting together on the pit wall and next to us actually watching all the pictures,” he said. “Some don’t want to watch these the pictures in this break. But that was their way how to deal with it.

“I just briefly spoke with them before they jumped into the cars again, just to make sure that they are good to go, and simply mention also to them both that we as a team really appreciate and respect each time they leave the garage that they take a certain risk. You never will have 100 percent safety.”

It was undoubtedly a traumatic experience for all 19 drivers. Yet to a man, they all lined up to resume the race.

At the original start, Hamilton had preserved his advantage from pole position while Valtteri Bottas, starting alongside him, struggled for traction off-line and fell back into the clutches of the field. Luckily for him, race control decided to use the cars’ positions at the second Safety Car line to decide the restarting order, rather than the moment at which the red flag was shown. He therefore lined up fourth instead of sixth for the restart.

Verstappen, now promoted to second, found little better grip from the starting position than Bottas had. But charging into turn one he braked determinedly late, fending off Sergio Perez and clinging to second place.

Within a few corners, Perez was the only Racing Point driver left in the race. Kvyat was involved again, and this time deemed a culprit, as he made a late bid for the inside of the Lance Stroll’s car at turn eight. There was more contact, and Stroll’s car was upended onto its roll hoop. He was unhurt, but the retirement means he has now contributed just two points to his team’s effort since standing on the podium at Monza seven races ago.

This fresh scare brought the Safety Car out for a lengthy spell. During this time Bottas – who else? – had the misfortune to suffer a puncture, and had to pit. “I don’t think there was any contact and I didn’t see any debris either, so I’m not quite sure what caused it,” he rued after the race.

Finally on lap nine the race restarted and the first consistent green-flag running of the night began. Hamilton didn’t quite sprint away, but got Verstappen out of DRS range and pulled four-and-a-half seconds clear by lap 18. Next came Perez, Albon and Lando Norris.

The latter had been fortunate, at least within the context of ordinary racing, rather than to Grosjean’s death-cheating extremes. He’d damaged his front wing at the original start when he clipped Pierre Gasly’s AlphaTauri, but the suspension meant he was able to have a new one fitted, salvaging his race.

McLaren were in good shape. Behind Norris was Esteban Ocon’s Renault, then Sainz, one of only two drivers to take the restart on soft tyres, and wielding them to brilliant effect. Having picked off Gasly on the run to turn four, he then took advantage of a lock-up by Ricciardo at turn 10 to pass the Renault. By lap 12 he’d passed his future Ferrari team mate Charles Leclerc for seventh, Ricciardo following him past.

Once the first pit stops had been made Sainz found himself behind Ricciardo again, but the Renault driver was now losing time behind Ocon. In consecutive laps he passed Ricciardo again, this time at turn four, then claimed Ocon as well. Renault belatedly told their drivers to switch positions, but the damage had already been done.

With that the points-scoring positions were essentially settled. Gasly gamely tried to hold fifth on a set of hard tyres, but the McLarens passed with ease. Ricciardo was poised to do the same when, up ahead, Perez’s Racing point began smoking.

The sight of a Mercedes-powered car suffering this kind of problem is rare. But an MGU-K fault had developed, and soon the Racing Point was billowing smoke and, eventually, flames. Perez pulled up at the exit of turn 10, three-and-a-half laps from home.

This was utter despair for Racing Point, whose hopes of tightening their grip on third place were over. McLaren were big winners, Norris and Sainz promoted to fourth and fifth. But most relieved of all must have been Albon. All race long he’d watched the rear wing of the driver most tipped to take his seat next year grow smaller and more distant ahead of him. Perez’s retirement promoted Albon to a priceless podium.

The race was neutralised until the end, so it didn’t matter that Hamilton had stayed out on older tyres while Verstappen behind him had pitted for fresher rubber. Gasly was also guaranteed a fortuitous sixth ahead of the Renaults. Leclerc, a lap down, took the final point, the tiniest compensation for the horror of spotting Grosjean’s car exploding in his rear view mirrors 56 laps and almost three hours earlier.

As the full details of Grosjean’s crash became clear, the dreadful reality of how close Formula 1 had come to losing a driver dawned. Incredibly, it wasn’t the last brush with disaster during the race.

While Perez pulled to a stop with his car ablaze, Norris was shocked to spot a marshal running across the circuit, lugging a fire extinguisher with him. The parallels with the gruesome 1977 crash which claimed the lives of Tom Pryce and marshal Frikkie Jensen van Vuuren were obvious, and horrifying.

“It’s obviously concerning if you hear a comment like this from Lando over the radio,” said Seidl, “it’s clearly something that should absolutely not happen. But I think as always that’s something it’s important to analyse behind closed doors together with the FIA.”

Between those two incidents in one race, the crane during qualifying at Istanbul and the marshals on the circuit at Imola, F1 has come too close to disaster too often in recent weeks. With the next event coming up at the same track this weekend, the series has little time to digest yesterday’s trauma before preparing to race again.

Until then, the immense gratitude felt by everyone in F1 towards those who strive to make it as safe as it can be was captured by Seidl.

“What we have seen today, I think it’s time to say a big thank you to everyone who was involved on the FIA side, on the teams’ side, in the last 20, 30 years to reach that level of safety. It’s important to keep working together on the topic of safety to further improve the cars.

“I think also everyone who was involved out there at the track today from inside the Medical Car, the track marshals, we have to say a big thank you for the great job they have done in order to solve this situation in the way they could together with Romain.

“We’re obviously very happy that we could see Romain walking away from it.”