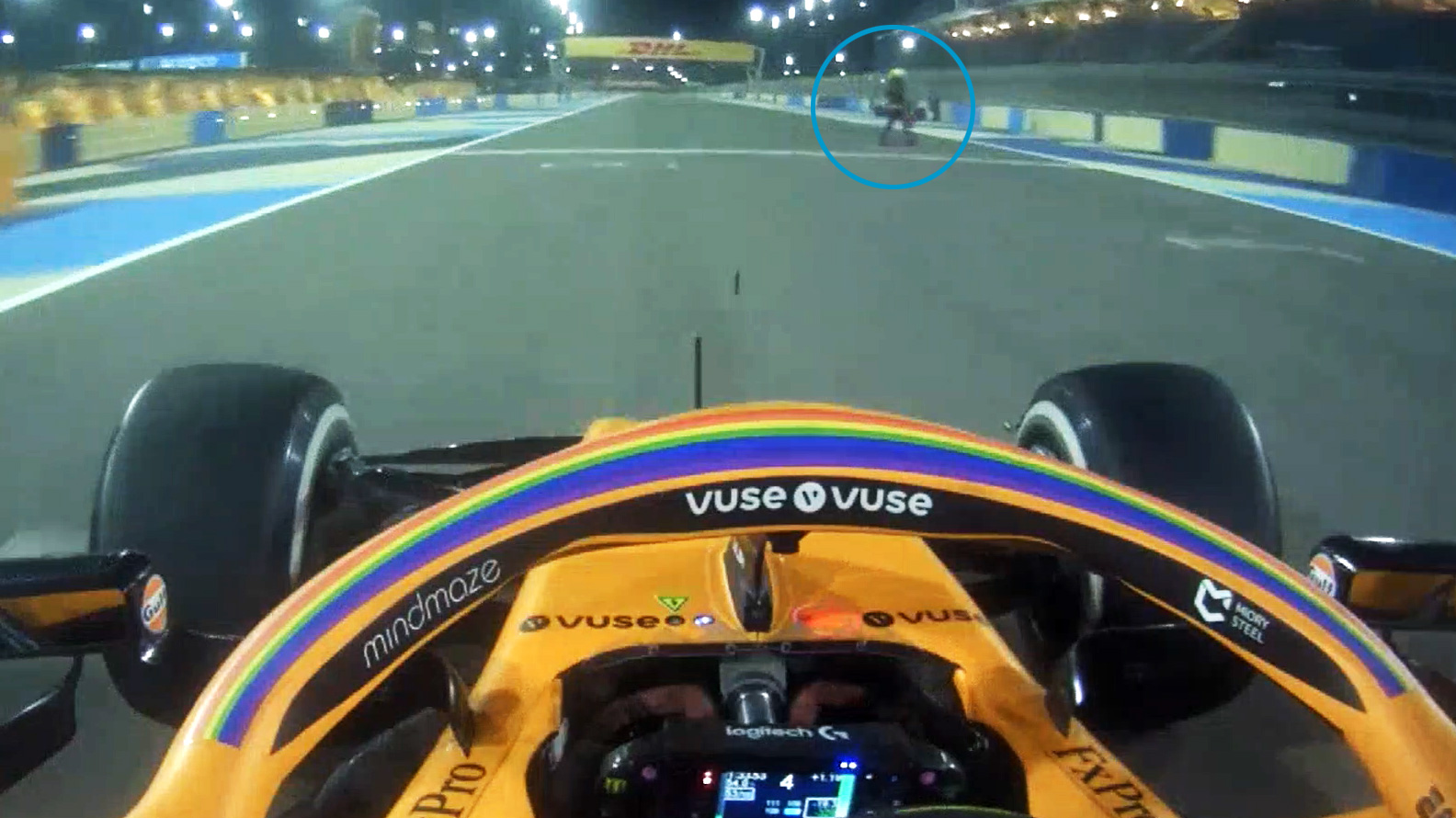 A fire marshal who ran across the circuit during the Bahrain Grand Prix did so without the permission of race control, F1 race director Michael Masi has confirmed.

Lando Norris spotted the marshal, who was carrying a fire extinguisher, crossing the circuit at the exit of turn 10. He was heading to Sergio Perez’s Racing Point, which had stopped with an engine fire.

“There’s a guy fucking running across the track,” exclaimed Norris on his radio.

“It was the last thing I was expecting,” Norris told media after the race. “The guy didn’t look left and right both ways before he crossed the road.

“It was a double yellow [flag] and I was going slow enough because there was no point in risking anything at all. It wasn’t the most visible guy, because at that point, I’m looking to the sky, he’s wearing like pretty much black or dark blue and it wasn’t that easy to see. All I kind of saw was a bouncing extinguisher.

“So it wasn’t lucky, but it was just a bit of a crazy moment. The guy had some balls on him so fair play.”

Track workers are forbidden from crossing the circuit. Masi suggested the marshal may have done so partly as a response to seeing the serious fire which occured earlier in the race when Romain Grosjean crashed.

“There was obviously another fire with Sergio Perez’s car and a fire marshal reacted on his own instinct without any instruction and just saw fire,” Masi explained. “And I would have said, particularly under the circumstances of what happened earlier, the priority was to put the fire out.”

However he stressed all marshals will be reminded of the requirement not to cross the circuit.

“The marshals have a very clear instruction,” he said. “We’ve already debriefed about it immediately and will remind everyone you shouldn’t cross the track.”

“We’ll reiterate that again for next week and get through,” he added. “I think in the circumstances, is it great? No, it’s not. But he sees a fire and he goes to put it out. So I don’t think we can castrate anyone, so to speak, for wanting to go and put a fire out, particularly after what we saw earlier and the enormity of the fire.”

A similar, notorious incident caused two deaths during the 1977 South African Grand Prix. Driver Tom Pryce was killed along with marshal Frikkie Jansen van Vuuren, who was struck by Pryce’s car when he ran across the Kyalami circuit during the race.