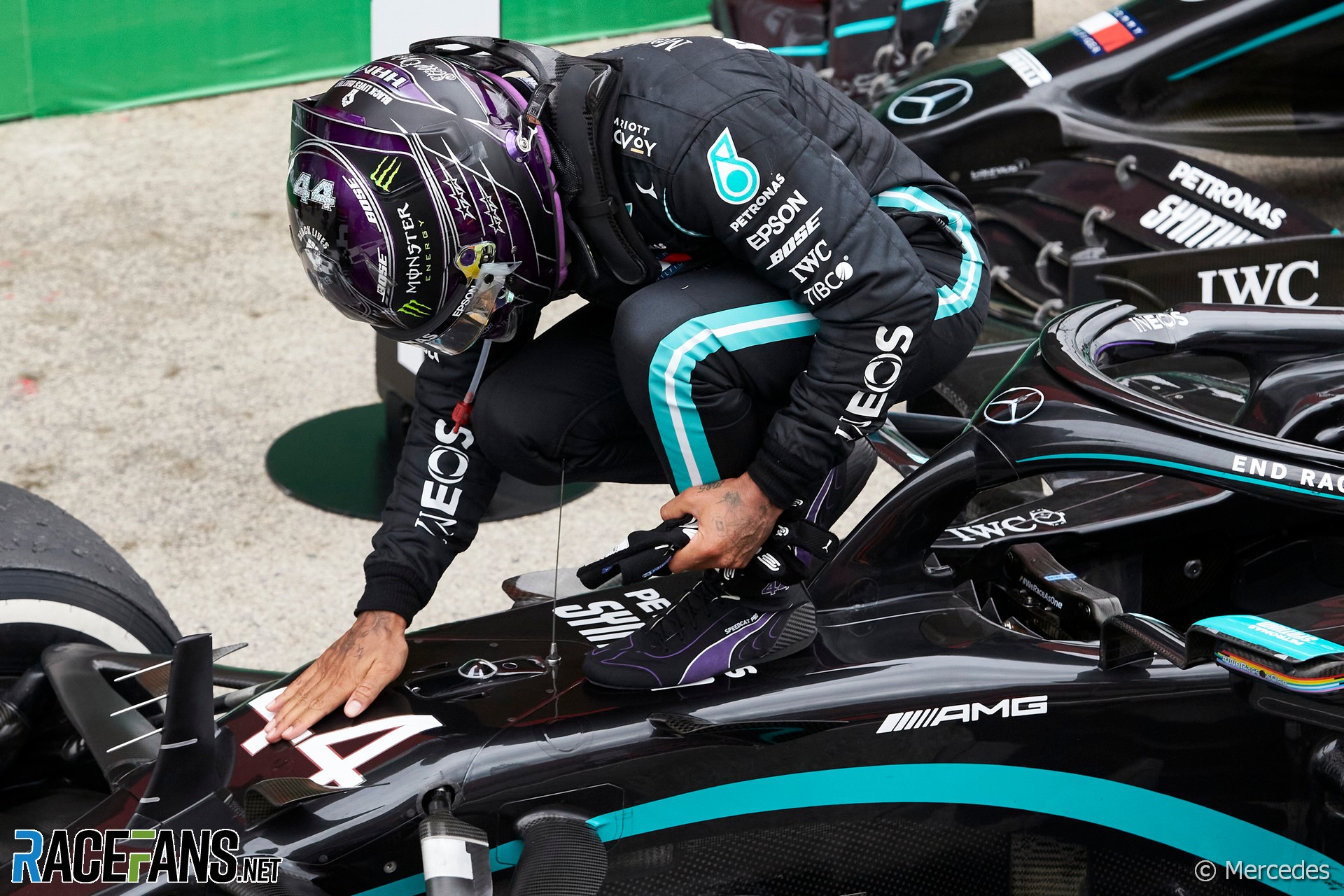 The remarkable thing about Michael Schumacher’s record of 91 career wins falling to Lewis Hamilton is how quickly it went from seeming unapproachable to inevitable.

“Schumacher’s 91 wins record looks safe for now” we wrote back in 2013, the year after his final retirement from the sport. And so it seemed: Among the leading drivers at that time Fernando Alonso had 31 victories and Sebastian Vettel 28.

Hamilton, in his first season as Schumacher’s replacement at Mercedes, was on 21, and added just one more to his tally by the end of the year. Then the V6 hybrid turbo era began and Mercedes produced a succession of devastating cars, which Hamilton has wielded to superb effect.

So much so that, just four years after that article we could confidently write: “Hamilton on course to equal Schumacher’s 91 wins record in 2020”. He had 61 wins then, and his 92nd yesterday means every driver in F1 history now stands behind him in terms of total victories. Dauntingly, he has as many wins as Ayrton Senna and Alain Prost combined.

Another big change is likely to happen in the outright wins table before the end of the year. Mercedes, currently the fourth most successful team ever with 112 victories, are only two away from reaching third-placed Williams, who have only won once in the last 15 years.

Remarkably, despite the championship having been shortened from 22 races to 17 because of the pandemic, Hamilton could still equal the record for most victories in a season if he wins all the remaining rounds. He has won eight times this year compared to the record of 13 set by Schumacher in 2004 (when there were 18 races) and equalled by Sebastian Vettel in 2013 (when there were 19). Hamilton’s highest win tally over a season is 11, which he managed in 2014, 2018 and 2019.

While we’re conjecturing about Hamilton sweeping the remaining races, note that if he takes pole for all the remaining rounds he will have as many pole positions as every other F1 driver who’s started a race this year combined. That’s not impossible, as Mercedes have taken pole for every race this year, and will set new a record if they complete the sweep.

But despite pulling 77 points clear of his team mate Valtteri Bottas (in car number 77), Hamilton cannot clinch the title at the next race. Even if Bottas fails to score and Hamilton bags another win and fastest lap for a maximum haul of 26 points, he will still be one shy of sealing that record-equalling seventh championship.

Mercedes, however, are very likely to clinch the constructors’ trophy again at Imola. They have a 209 point lead over Red Bull, and need to be at least 176 ahead on after the Emilia-Romagna Grand Prix to claim the title. So unless Red Bull out-score them by more than 33 points, the title will go to Mercedes on Sunday evening.

The Portuguese Grand Prix made its return to the F1 calendar following a 24-year absence. This equals the record for the longest gap between consecutive F1 races with the same title, which was held by… the Portuguese Grand Prix! It was previously missing from the schedule between 1960, when it was held at Porto, and 1984, when the event returned at Estoril.

The Autodromo do Algarve held its first ever F1 race, and is the 75th different venue to have held one of the 1,030 rounds of the world championship. The next new venue is due to be the Hanoi street circuit when it belatedly holds the first Vietnam Grand Prix some time in the 2021 F1 season.

Have you spotted any other interesting stats and facts from the Portuguese Grand Prix? Share them in the comments.

34 comments on “Mercedes set to win constructors’ title at Imola, Hamilton’s coronation will have to wait”