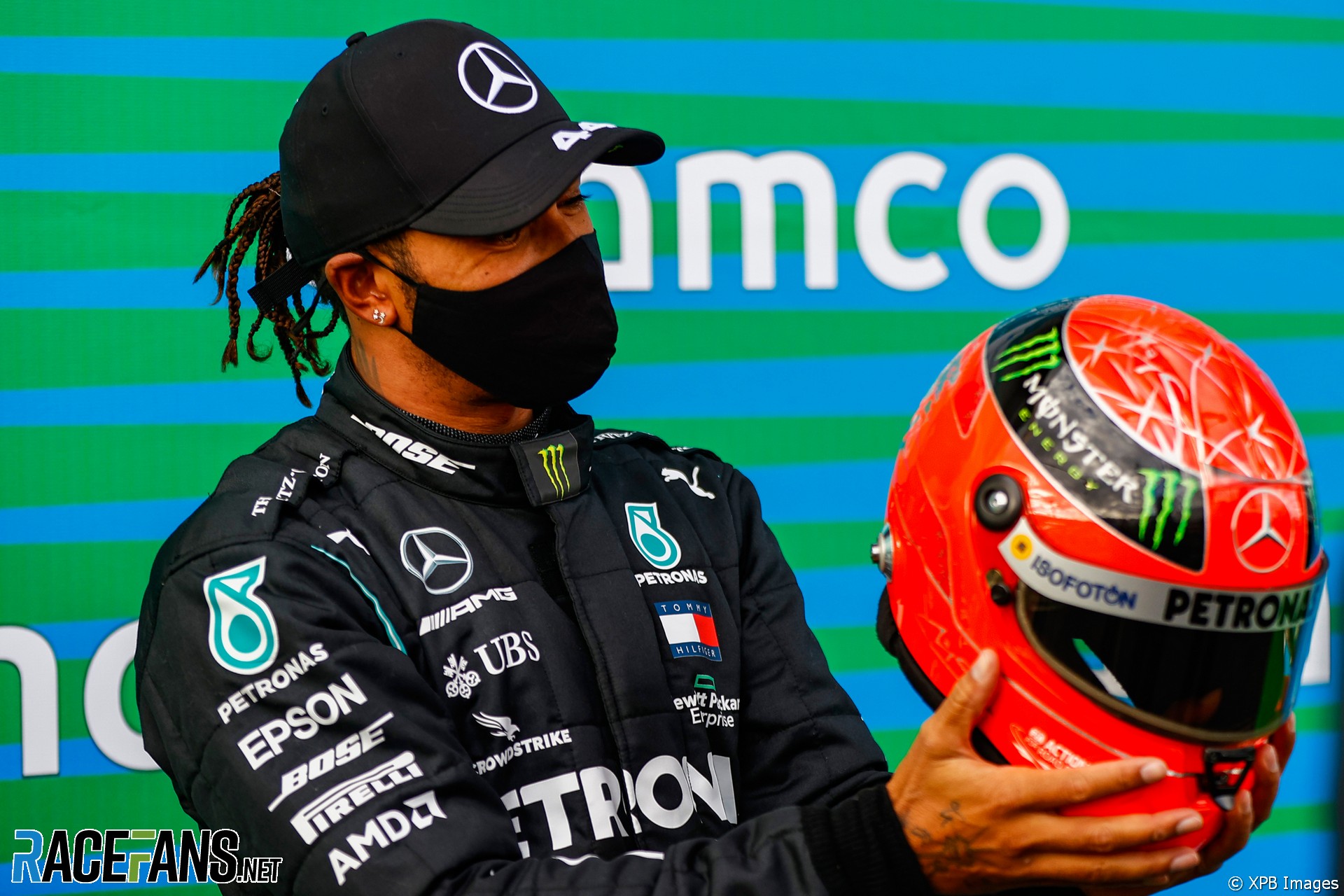 The milestone win was heavily-promoted and long-awaited. Indeed, an edition of Stats and Facts published almost exactly three years ago projected “Hamilton could tie with Schumacher some time in late 2020”.

It took Hamilton 261 races to equal Schumacher’s record. That’s 15 starts more than Schumacher needed to reach 91 wins. However Schumacher then started 60 further races without winning any of them – it’s hard to imagine Hamilton, who just scored his seventh win in 11 races this year, is about to do the same.

Hamilton is the 10th different driver in the history of Formula 1 to have held the record for most wins. His predecessors are Giuseppe Farina, Juan Manuel Fangio, Johnny Parsons, Alberto Ascari, Stirling Moss, Jim Clark, Jackie Stewart, Alain Prost and Schumacher.

But Hamilton also played a role in equalling another major record on Sunday. This was the 228th consecutive race in which a Mercedes-powered car scored a point. That matches the record set by Ford-Cosworth, who achieved the same in a 16-year-spell from the 1967 Canadian Grand Prix to the 1983 Dutch Grand Prix. Mercedes’ streak began at the 2008 Chinese Grand Prix (the occasion of Hamilton’s ninth win).

While the longer calendar today means Mercedes’ run spanned fewer years, both manufacturers managed an entire decade of points-scoring: Ford in the seventies, Mercedes the noughties. A couple of caveats are needed: Only the top six cars scored points when Ford set the record, while in some races they faced very few non-Ford-powered opposition.

Mercedes moved a step closer to an unprecedented clean sweep of every pole position this year. Valtteri Bottas delivered their 11th since the season began and 12th in a row overall (halfway to Williams’ record of 24). It was the 14th of his career, putting him level with Alberto Ascari, James Hunt, Ronnie Peterson, and Rubens Barrichello.

Coincidentally, Max Verstappen’s ninth fastest lap of his career also puts him level with Peterson, along with Denny Hulme and Jacques Villeneuve.

Hamilton extended his record run of consecutive points finishes to 44 – matching his race number. He also has the second-longest streak of 33. This benchmark previously belonged to Kimi Raikkonen, but he took a new record last weekend by surpassing Barrichello as the most experienced driver in the history of F1.

The Eifel Grand Prix was Raikkonen’s 323rd start. He should reach 329 in Abu Dhabi, and if he fancies sticking around for another year could well reach 350 in the 2021 F1 season.

Daniel Ricciardo scored his first podium for more than two years and his first since joining Renault. This was their first visit to the rostrum since returning to F1 as a full works team in 2016.

Nick Heidfeld gave Renault their last podium finish – also their 100th – at the Malaysian Grand Prix in 2011. (The team liked to call itself Lotus Renault at the time, but was officially entered as Renault, and only changed its designation the following year.)

Finally, Nico Hulkenberg’s eighth race on home ground was a very unexpected development: He wasn’t originally on this year’s grid and Germany didn’t have a round on the 2020 F1 calendar.

Video: The history of F1’s record for most wins

Have you spotted any other interesting stats and facts from the Eifel Grand Prix? Share them in the comments.