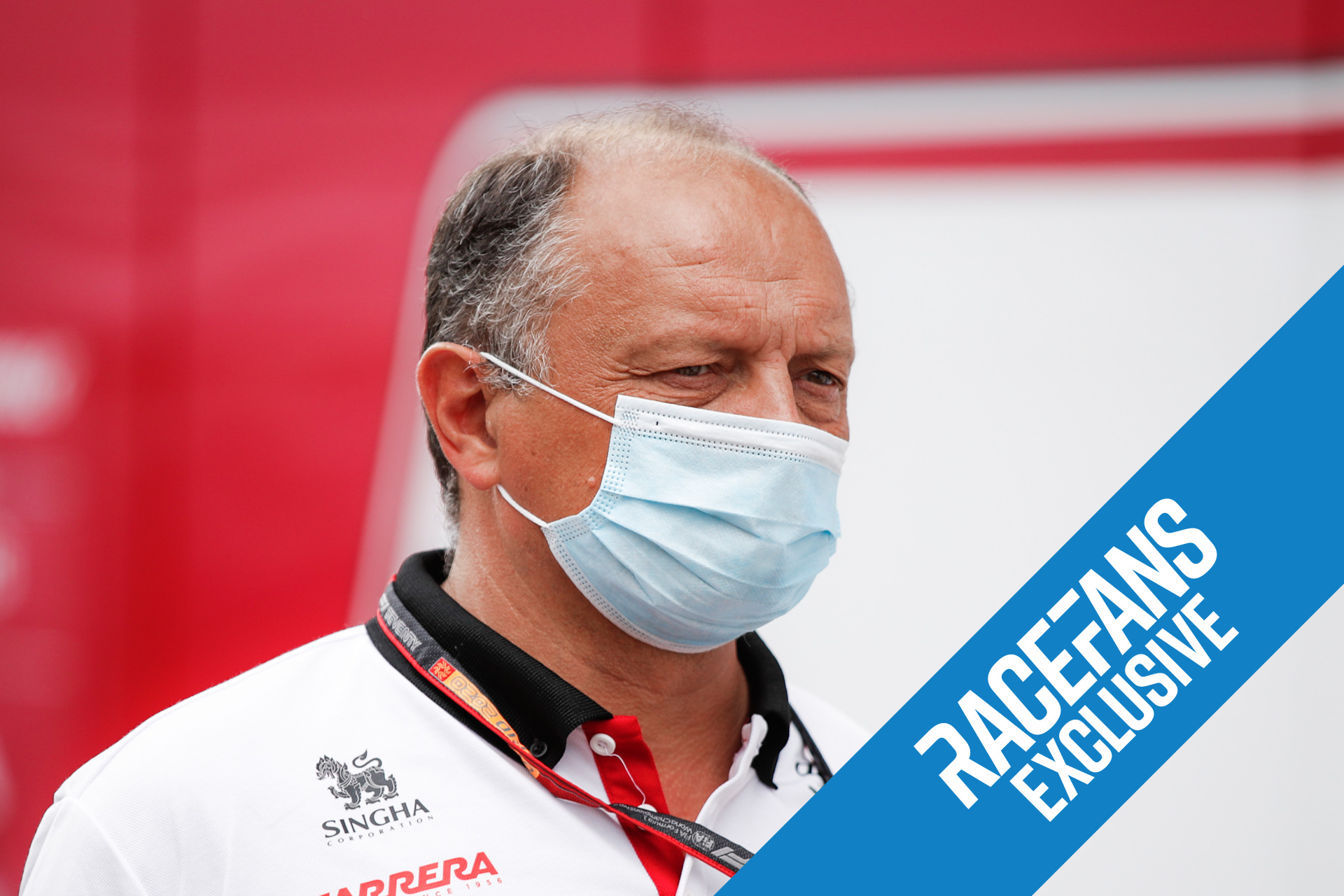 In late 2018, when Kimi Raikkonen signed to drive for Sauber, the team was on the up.

Having ended the previous season last in the championship, the team’s line-up of Charles Leclerc and Marcus Ericsson made regular visits to the points in 2018. By the end of the year Raikkonen’s choice appeared to be vindicated: the team were fifth-quickest in each of the final three races, with only the untouchable ‘big three’ of Mercedes, Ferrari and Red Bull consistently ahead.

The team’s Alfa Romeo sponsorship deal became a full rebranding on Raikkonen’s arrival. With that, a world champion reunited with the team which gave him his F1 break and Ferrari power still beneath his right foot, the stars seemed to have aligned for them to do some giant-killing.

It hasn’t worked out that way. The Sauber-run team were an unremarkable eighth in the championship last year, and this year began poorly. F1 has visited three tracks so far this year – two of them twice – and the Alfa Romeo-Ferrari C39s were slowest at each of them.

Team principal Frederic Vasseur was placed in charge in mid-2017 by team owners Longbow Finance, who put the team in the hands of a new company, Islero Investments AG, the following year. Despite his team’s downturn in fortune on the track, and the pressures Covid-19 has brought to bear on the business, Vasseur believes future changes coming to the sport will help independent squads like his become competitive again.

But first there is the immediate concern of the team’s slump towards the back of the grid, and its causes. One is obvious: Alfa Romeo’s Ferrari power unit is not as potent as the one it enjoyed last year. Like Ferrari themselves and fellow Ferrari customer Haas, it’s a deficit which hurts the team most in qualifying.

“It’s a bit of a strange feeling because we are clearly missing pace on Saturday and we are in a very tough situation for the quali,” Vasseur told RaceFans in an exclusive interview conducted after the first three races of the year.

“[But] we had each time a good recovery in the race with decent race pace in every single event. Now we have to work like hell on the quali mode because when you start from the back it’s quite difficult, sometimes it’s even impossible, depending on the track and the layout, to come back to the points.

“It’s challenging also because everything is almost frozen on the car, it’s not easy to develop but it’s a challenge.”

That challenge might also be viewed as a frustration, but Vasseur is urging his engineers to concentrate their energies on areas where they can make a difference.

“The engine part is not in our hands,” he says. “I want to be focussed on what I can control or what I can improve.”

Vasseur has a point. While all three Ferrari-powered teams are less competitive than they were 12 months ago, often lapping the same circuits slower, Alfa Romeo has made the biggest step backwards of the three. It is not just the power unit that’s at fault.

“We had tons of discussion internally and I told the guys ‘forget about the engine’. It’s Ferrari’s business, they will do their best for themselves.

“For us, let’s stay focussed on our side, on the chassis, on the driving and the collaboration internally just to try to improve the package.

“It’s not only the engine, even in quali. It means that we have to ‘clean in front of our door’ before we speak about the others.”

Over the opening three races, Vasseur believes the team “made some mistake because we over-reacted… to try to compensate the deficit of performance.”

“I think we didn’t do a good job, honestly, and we have to correct it,” he explains. “The potential of the car is quite difficult to see as long as we are not able to do a perfect weekend.”

Doing a ‘perfect weekend’ is difficult when your drivers line up at the back. But in Raikkonen and Antonio Giovinazzi they have the classic pairing of an established hand who knows all the tricks and a (relative) newcomer with everything to prove.

Raikkonen’s raw one-lap pace may not be what it was, but his consistency over a race is hard to fault. While Giovinazzi increasingly has the measure of him on Saturdays, Raikkonen’s race pace often shows on Sundays.

This was the case last weekend, when the 2007 world champion was one of few drivers to make a one-stop strategy work. It paid off, and he gained five places in the race. But when you start last, that only gets you halfway to the points.

In fairness to Giovinazzi, he had to play the dutiful number two in the opening two races of the season, waving Raikkonen past as the team endeavoured to maximise its points haul. Ironically, despite this, Giovinazzi remains the team’s only points-scorer so far this year.

He was also noticeably reluctant to make way for Raikkonen in the second round. Nonetheless Vasseur is confident his two drivers can be relied upon to continue playing the team game when asked.

“The strategy for the team is very clear and we will stick to the strategy. We agreed on the strategy before the season that when one car is faster than the other, for tyre reasons mainly, that we will swap and we’ll swap again in the last lap of the race if we can. We did like this in the past.

“I did it – and I had some bad comments in the press – when we did it in Spielberg two years ago between Leclerc and Ericsson. But it’s our policy, the internal rules into the team and we’ll stick to the rule.”

Given the team’s present level of performance, the drivers must be prepared to respect the team’s tactics to have the best chance of scoring points, Vasseur believes.

Away from the track, the team shares one identical challenge with all of its competitors: the impact of Covid-19. Vasseur won’t be drawn on the exact scale of the financial consequences for the team, but says starkly: “The impact is huge.”

After the opening 10 races of the F1 season were called off, Alfa Romeo sought other ways to keep its sponsors in the picture.

“Case by case we had to discuss with the sponsors and try to elaborate a new strategy to help them to get there on the F1,” he says. “I think we did a massive effort altogether with the drivers to do much more on the social media, much more in terms of filming and we tried to compensate as much as we can.”

“I perfectly understand also the fact that [sponsors] are sometimes struggling in their own business and that if we don’t deliver we don’t deliver,” he adds. “But in all the cases, honestly, with our sponsor we sit down, we had very open discussion and we found solution to compensate, to extend, to modify. Honestly it happened very well and I’m more than happy with all the [solutions] we found so far.

Before the pandemic hit, Formula 1 had already confirmed plans to introduce a cost cap next year. The subsequent decision to lower the initial spending limit from $175 million to $145 million, with further $5m drops in each of the next two seasons, is something Vasseur welcomes, to put it mildly.

“It was Christmas in March!” he grins when asked about the decision. “I think it’s a good step forward for F1.”

Vasseur “spent a lot of energy” on the budget cap, and makes it clear he felt that “due to the crisis the first target [cap] was not enough”. He says all team will “struggle with the budget in the future.”

“The economy is changing and it won’t be easy in the next couple of months or years,” he says. “But I think the FIA and the FOM took the right decision to try to reduce more than the first target the cost cap and the move that we did – OK, some teams will consider that it’s too much, some others not enough – but as we are 10 teams coming from different regions with different structures with different budgets, you will never find a compromise.”

The 2021 F1 season will therefore be a vital one for this team. Not only will it be their first opportunity to show how competitive they can be under the new cost cap, but it’s also the final year of their branding deal with Alfa Romeo. Will the brand extend its commitment, particularly given the team’s current form?

“We are partners on the project, it’s the title sponsor of the team,” says Vasseur. “They know perfectly that when you are in this kind of project it’s a long-term project. You know also that you will have good results and bad results and that we have to work together and try to improve the situation.

Vasseur expects discussions on a possible extension to begin “in the next couple of months, probably.”

“Also they have some change into the management and we have to take our time on this,” he adds. “But honestly to have a long-term contract as we have is a comfortable situation.

“I perfectly understand and I am perfectly aware that we need to get results. Everybody needs to get results on the grid. Nobody can be satisfied with bad results and we are the first ones to try to improve the situation.”

The year may have started badly in terms of outright performance, but the potential is clearly there. With the slowest car in pure, one-lap pace, Alfa Romeo is nonetheless ahead of Haas and Williams in the points standings.

Vasseur is determined they can build from there. “The reality is the reality,” he says. “We have a deficit of performance. We have to work on it.

“But honestly this is the life of the racing team, that you are always in the search of the performance.”