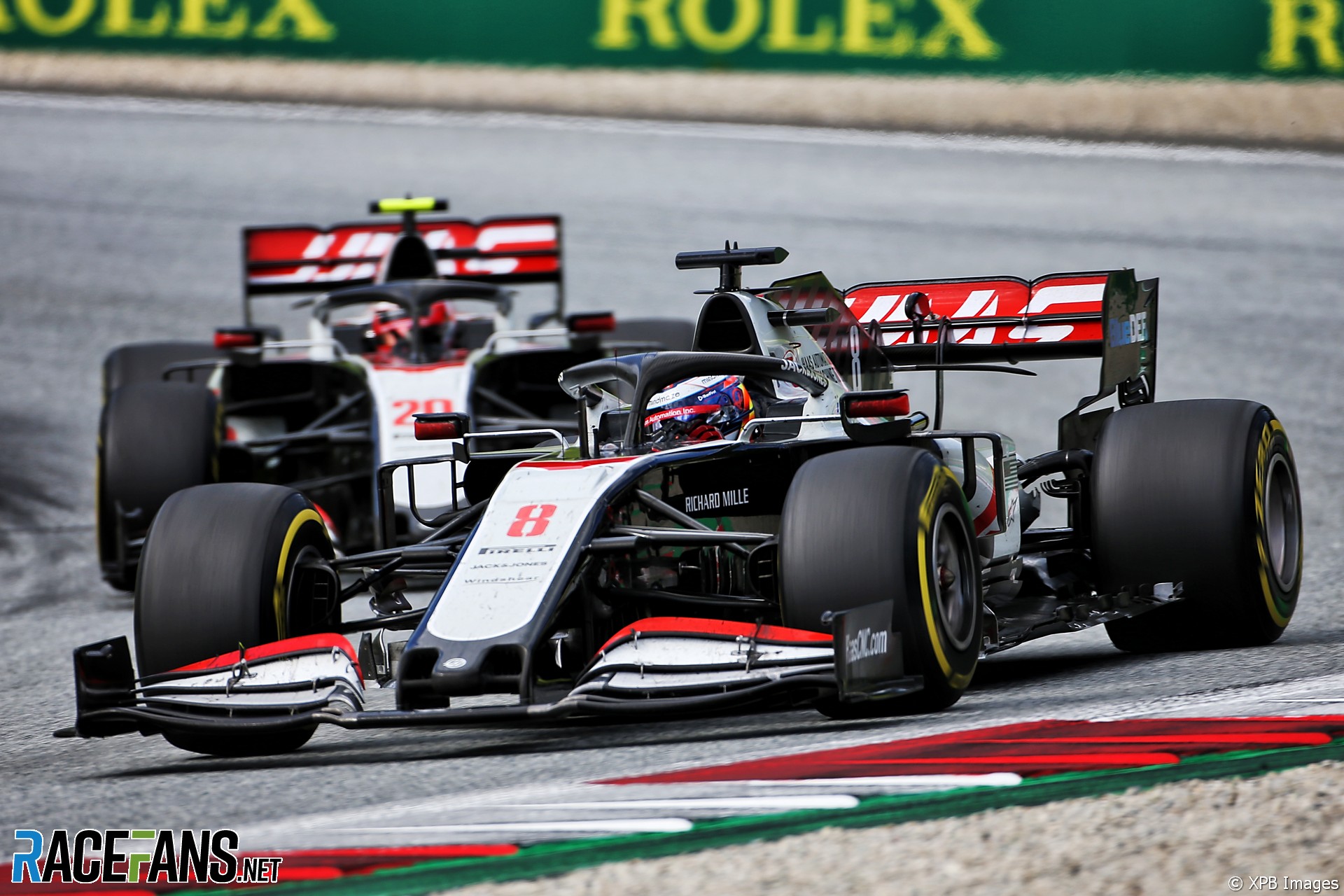 Three drivers were told to let their team mates overtake them during the Styrian Grand Prix – but two of them took quite a bit of convincing.

Half of the 10 teams had to cope with the often fraught sight of watching their two cars dice for position during last week’s race. But not all of them resorted to instructing their drivers on what to do.

Alfa Romeo were among those who did. Antonio Giovinazzi was told to let Kimi Raikkonen overtake him for the second race in a row.

Giovinazzi wasn’t keen on the idea, however, as he had his sights fixed on Daniil Kvyat ahead of him. It took four laps for Giovinazzi to respond to the instructions, while also being reminded to respect track limits as he was shown the black-and-white flag for running wide too often.

He was being told to make way for Raikkonen at the very moment his team mate’s car was nosing ahead of him on the climb up towards turn four:

Letting Raikkonen go dropped Giovinazzi into the clutches of the two Haas drivers. As Romain Grosjean struggled to make an impression on the Alfa Romeo, Haas decided to let Kevin Magnussen have a go.

This was also not a popular suggestion:

Both Haas drivers passed Giovinazzi on lap 68, prompting Grosjean to ask: “Can we swap back?” There was no reply. On the final lap he remarked: “I don’t understand why we don’t swap,” and made his dissatisfaction clear as he drove back to the pits, though not without complimenting his team on the improvements to his car’s handling since Friday.

In both these cars the drivers who had to give up places were obviously unhappy as they were on the same strategies as their team mates and the exchange of positions came late in the race, meaning they finished lower than they otherwise would have done.

In the case of McLaren, when Carlos Sainz Jnr was told to let Lando Norris by the circumstances were somewhat different. Although they exchanged places two laps after the Alfa Romeo drivers, Norris was on a different tyre compound to his team mate, who had lost time earlier in the race with a slow pit stop.

Sainz was told “no fight with Lando, we have to let him go in turn four, let him go, it’s a team decision.” He acceded, and despite some confusion over which lap he was supposed to let Norris through, the places were swapped smoothly. That proved vital, as Norris eventually took fifth place at the very final corner, which might not have been possible had he lost more time passing Sainz.

The driver Norris passed for fifth was Sergio Perez. He had lost some time earlier in the race running behind team mate Lance Stroll. In the first stint, Racing Point left Perez out longer, giving him five-lap fresher tyres for the second stint. When he caught Stroll the team didn’t interfere, but Perez passed his team mate with little difficulty.

Renault’s drivers also fought for position on track. Daniel Ricciardo made three attempts to pass Esteban Ocon before finally making a move stick on lap 19. By that time he was growing concerned about the time he was losing, as he explained afterwards.

“If I didn’t get by that lap, I honestly was expecting to get a call to swap cars,” said Ricciardo. “I think I would have been a little bit surprised if I hadn’t got that.”

The team had indicated to Ocon they were growing concerned about how much time he was costing his team mate: “OK Esteban we’re getting a threat from Stroll behind Danny, need to pick up the pace,” he was told shortly before Ricciardo found his way ahead. Whether that call would have eventually come, and early enough for Ricciardo’s liking, remains to be seen.

Judging when and when not to impose orders on drivers is always a tricky and contentious call. In the case of the Alfa Romeo and Haas drivers, the forced exchanges of positions arguably generated ill will to no real gain, as none of their drivers finished in the points. McLaren supplied an example of how and when to do it well.