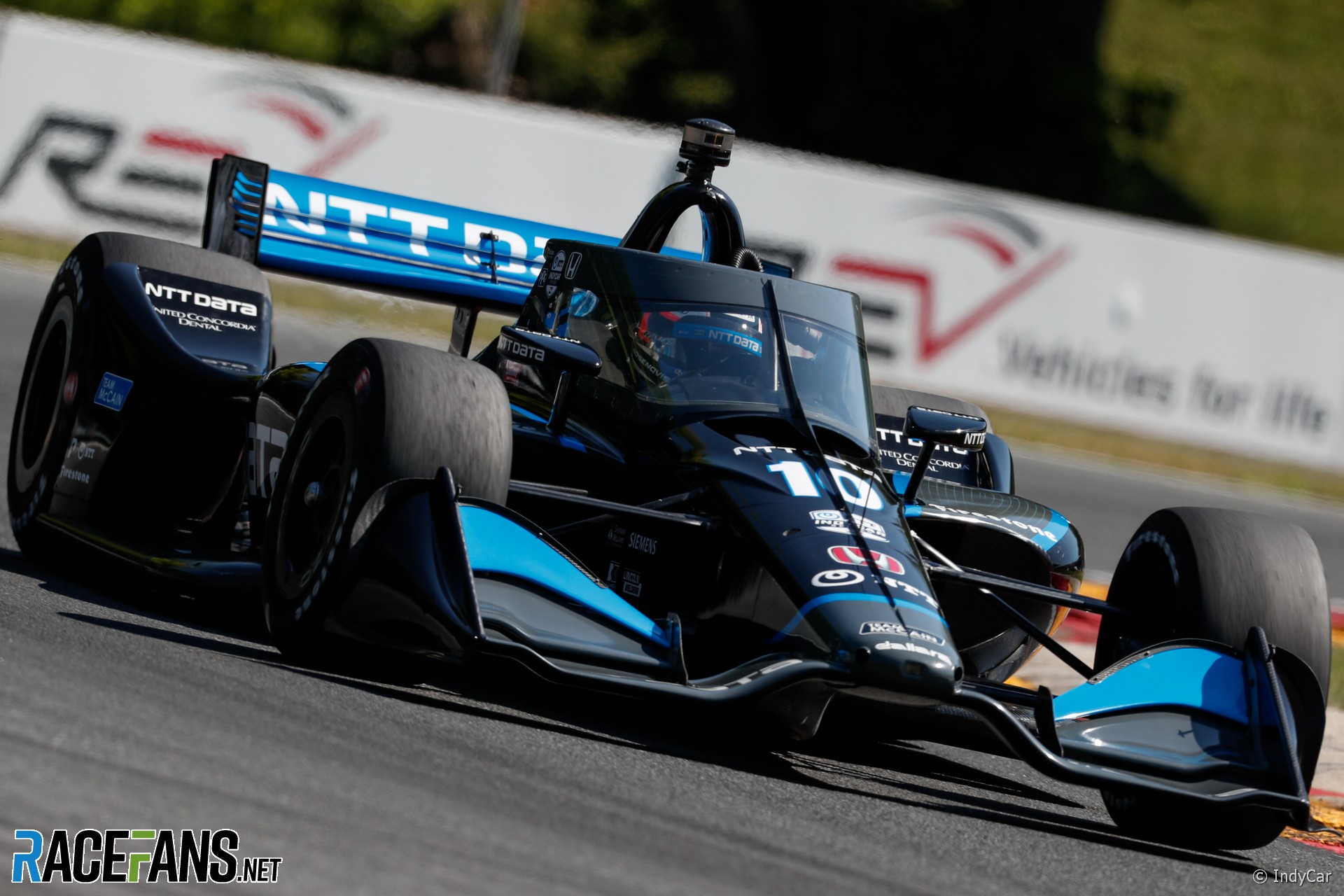 Felix Rosenqvist scored his first IndyCar win in Road America by denying Pato O’Ward his maiden triumph, thanks to a superbly-judged pass on the penultimate lap.

O’Ward had led the majority of the race up to that point having started from pole position alongside fellow youngster Colton Herta.

When the green flag fell carnage broke out behind them. Will Power first punted Ryan Hunter-Reay into the barrier at turn one, then sent Graham Rahal into the barriers at the next corner.

Power’s wild opening lap was capped by a penalty for avoidable contact, forcing him to start the restart from last place.

At the restart O’Ward controlled proceedings while Power’s horrible day continued. After spinning at the final corner he stalled twice as he tried to rejoin the track, causing another full-course caution. Power was able to get the car going and made it to the pits for a new front wing, but he was now well out of contention and started an extreme fuel-saving strategy.

O’Ward continued to control the opening stage of the race ahead of Rosenqvist and Alexander Rossi. However as the second round of pit stops neared Rosenqvist was gaining on O’Ward by over a second a lap. In the pits, however, Rosenqvist’s car was dropped off the jacks before the front-left wheel was attached, costing valuable time.

During the leaders’ final stops, Rosenqvist stayed out one lap longer than O’Ward and came out five seconds behind the McLaren SP driver with 13 laps to go. Rosenqvist opted for the harder compound for the final stage of the race while O’Ward had to run used rubber to the flag.

Partly aided by traffic in the form of Conor Daly and Dalton Kellett, Rosenqvist closed the gap to the leader and with four laps to go the gap was down to a second. On the penultimate lap, O’Ward ran wide and Rosenqvist pounced, grabbing the inside line to pass for the lead. From there Rosenqvist cruised home for a first IndyCar win which looked on the cards during his rookie season last year. O’Ward, second, surely has his first victory coming to him.

Rossi completed the podium, finally scoring his first good result of IndyCar’s ‘Aeroscreen era’. He was followed by Marcus Ericsson, who avoided a repeat of yesterday’s last-lap spin.

The former F1 driver cut his way through the field after starting 16th. He held fourth in the closing stages after a couple of eye-catching moves on Dixon and Herta. Rossi also enjoyed the first decent race of his season after starting 10th, moving up to third, but lacking the pace to challenge Rosenqvist and O’Ward for the lead.

The championship leader, who scored his third win from the first three races yesterday, lost several positions during his first pit stop due to a problem attaching his rear-right wheel. He ran into more trouble during his third stop and stalled the car twice as he pulled out of his pit box, ending his hopes of bringing home a decent haul of points.

But while Dixon’s run of consecutive wins ended, Ganassi won their fourth race in a row. All these have come in the four races since Roger Penske’s takeover of the IndyCar series, which so far has coincided with a four-race win drought for his enormously successful team.