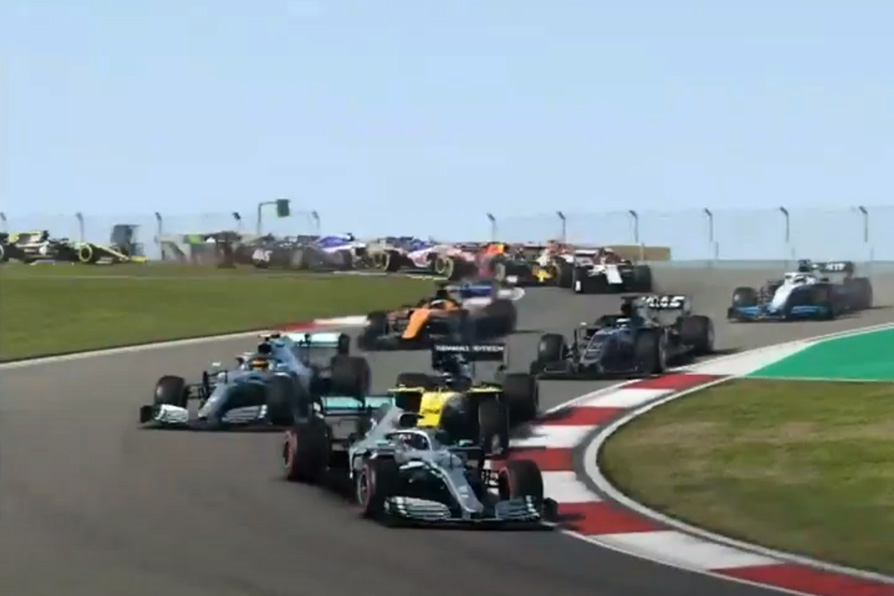 Charles Leclerc scored his second Virtual Grand Prix victory in as many appearances in the series.

The Ferrari driver came out on top in a race-long scrap with Red Bull rival Alexander Albon. The pair were separated by little more than two seconds after 28 laps, half a grand prix distance around the Shanghai International Circuit.

Albon, who shared the front row of the grid with pole sitter Leclerc, pushed his rival hard in the opening laps. He briefly got ahead of the Ferrari driver after the pair made their mandatory pit stops, only to fall behind him again.

Stoffel Vandoorne took third place on the road but a five-second time penalty for multiple warnings handed a virtual home podium appearance to Renault’s round one winner Guanyu Zhou.

George Russell fumed after a penalty relegated him from second on the grid to fifth. He lost places at the start, then gambled on an early pit stop for hard tyres to regain lost ground, but lost time when footballer Ciro Immobile spun in front of him as he left the pits.

From there Russell mounted an aggressive recovery drive through the field, and was within sight of Zhou when the chequered flag fell.

Among those who fell victim to one of Russell’s bold moves was Louis Deletraz, who came in seven behind the second Merceds of Esteban Gutierrez. Red Bull Junior Team driver Liam Lawson took eighth ahead of Nicholas Latifi and Carlos Sainz Jnr.

The McLaren driver bounced back from a first-lap crash to lead several laps on his debut. But he was his team’s only representative in the race after Lando Norris suffered yet more technical problems. He remains yet to complete any of the three races he has entered so far.