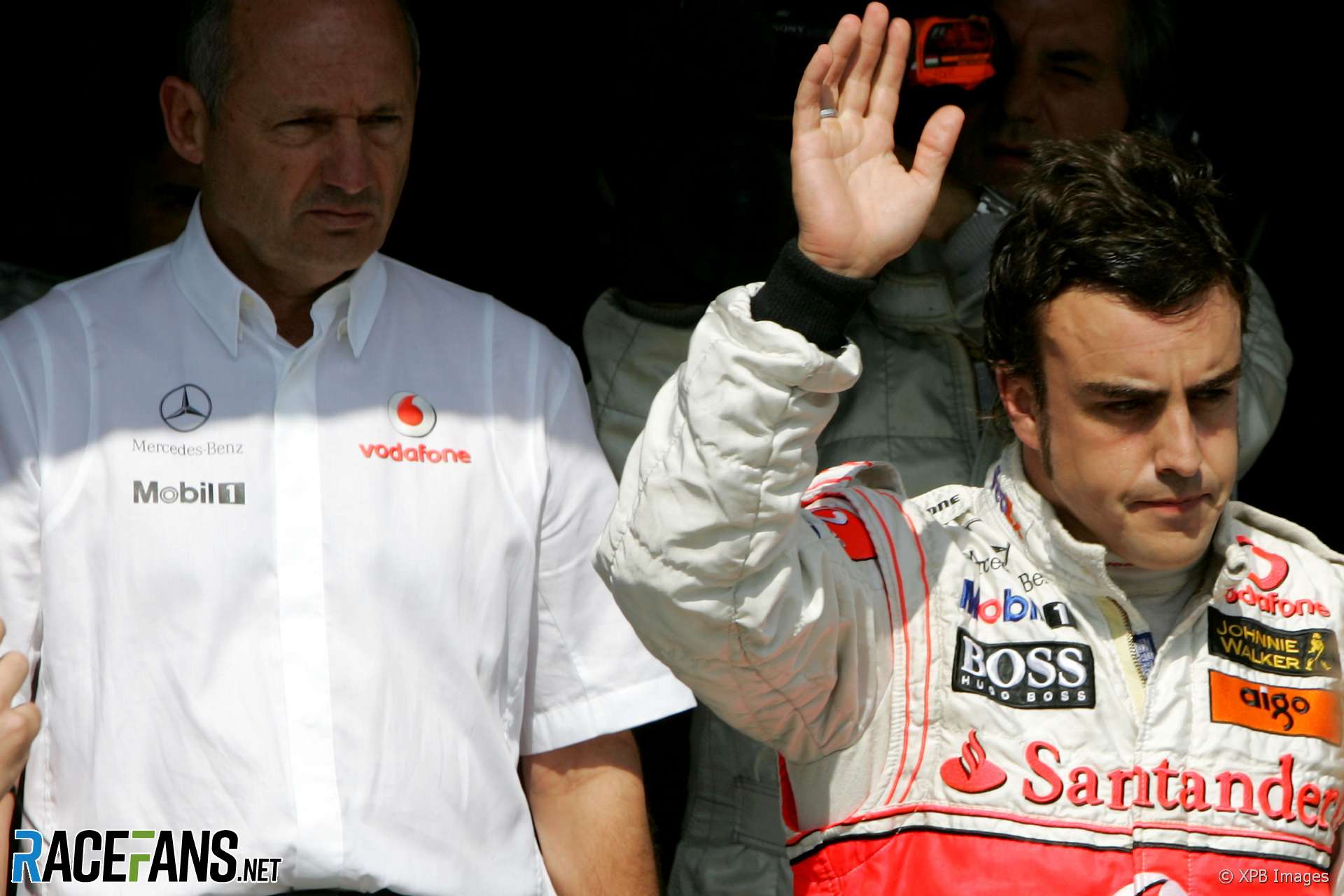 Fernando Alonso was wrongly blamed within McLaren for revealing information to the FIA which led to the team being fined $100 million in 2007, his former team mate believes.

Pedro de la Rosa, who was McLaren’s test driver in 2007, has shed new light on the ‘Spygate’ case which also led to McLaren’s exclusion from that year’s championship.

De la Rosa described how relations between McLaren and the two-times champion Alonso had become strained as his team mate Lewis Hamilton, then in his first year in Formula 1, proved a strong rival.

McLaren fell under suspicions of gaining access to a dossier of information about rivals Ferrari, including details such as their car’s weight distribution. An FIA hearing in July that year initially cleared McLaren, but a second hearing was convened after new information came to light, which some in McLaren believed was provided by Alonso after a confrontation between him and team principal Ron Dennis during the Hungarian Grand Prix.

“That situation was like a divorce inside the team,” De la Rosa told the official F1 website. “The relationship was not good before, but that was like the complete divorce.

“The fact the FIA knew about it raised many questions over who had passed this information to the FIA. And everyone seemed to blame Fernando for something that we didn’t know and we have zero evidence that he did.

“But the FIA knew, it could be from Ferrari, it could be from any anyone because there was many people in the team that knew about the weight distribution of Ferrari or whatever. So it was it was unfair in the way that Fernando was blamed for something that I don’t think he did. So it was the it was the divorce point, because he was looked at someone that had damaged McLaren.”

Among the evidence revealed by the FIA after McLaren’s penalty was announced was extracts from a series of emails involving De la Rosa and Alonso in which they discussed the information McLaren’s Mike Coughlan had obtained from Ferrari’s Nigel Stepney. Explaining its decision, the FIA World Motor Sport Council noted at the time one email dated March 25th 2007 in which “Mr De la Rosa states that tests had been carried out on a flexible rear wing which Mr De la Rosa says is ‘a copy of the system we think Ferrari uses'”.

However de la Rosa insisted the information McLaren obtained was no more than what is typically exchanged between teams. “Still I wake up some nights with a cold sweat because I still don’t understand why we were fined 100 million,” he said.

“We were a racing team that as with any other competitor, we tried to find information from them, which everyone does in Formula 1. The information we had about Ferrari was the typical information you share [at] a coffee machine, just speaking with engineers: Do you know what weight distribution Ferrari has, these type of questions that obviously someone in the team had the information because of a friendship at Ferrari and we shared this information.

“Did we change anything of our development, of our testing program? Nothing. Nothing changed. We didn’t use that information.”

McLaren’s possession of the Ferrari dossier originally came to light after Coughlan’s wife took it to be duplicated at a photocopying shop in Woking, neat McLaren’s base.

“People have to understand that that information that was passed, I never saw it,” said De la Rosa. “It was never in the team. It was Mike’s wife that did the photocopies. Why did you think she did it? Because Mike didn’t know what to do with the information. He was not taking it seriously.

“So I was surprised that – OK, we did something wrong, yes, of course – I’m not trying to say we did everything right. But was it 100 million worth? My God, I mean, I thought we got thrashed by that type of penalty. We lost all the points in the world in the constructors’ championship. Eventually we lost the championship in the drivers as well. So I think we paid a big penalty, a big price for something that in many teams I’ve been in Formula 1 because I’ve been in many teams, there’s always information flying around from other teams, other competitive teams.”

Alonso’s association with the Spygate episode had ramifications later in his F1 career. Three years ago Toto Wolff, team principal of Mercedes who were McLaren’s engine supplier in 2007, indicated Alonso would not be considered for a drive with the team because of his “history with Mercedes”.

De la Rosa doubts Spygate cost Alonso a chance to drive for the team which has dominated the last six seasons of F1. “I think that we all make many mistakes,” he said. “At the end of the day, Fernando, he’s a critical guy, he says things to the face when he doesn’t how people are working or doing things, and I think he got a lot of the blame for actually something that was not… I mean, let’s be honest, the guy didn’t do anything wrong.

“He was blamed for the this spy scandal, Spygate, then he shouldn’t have been. And I think that the during the years, everyone has realised that Fernando was just caught in the middle of the fight like I was as well and many, many people. But there was other fights going on at the high levels that we were not aware of actually at that point.”