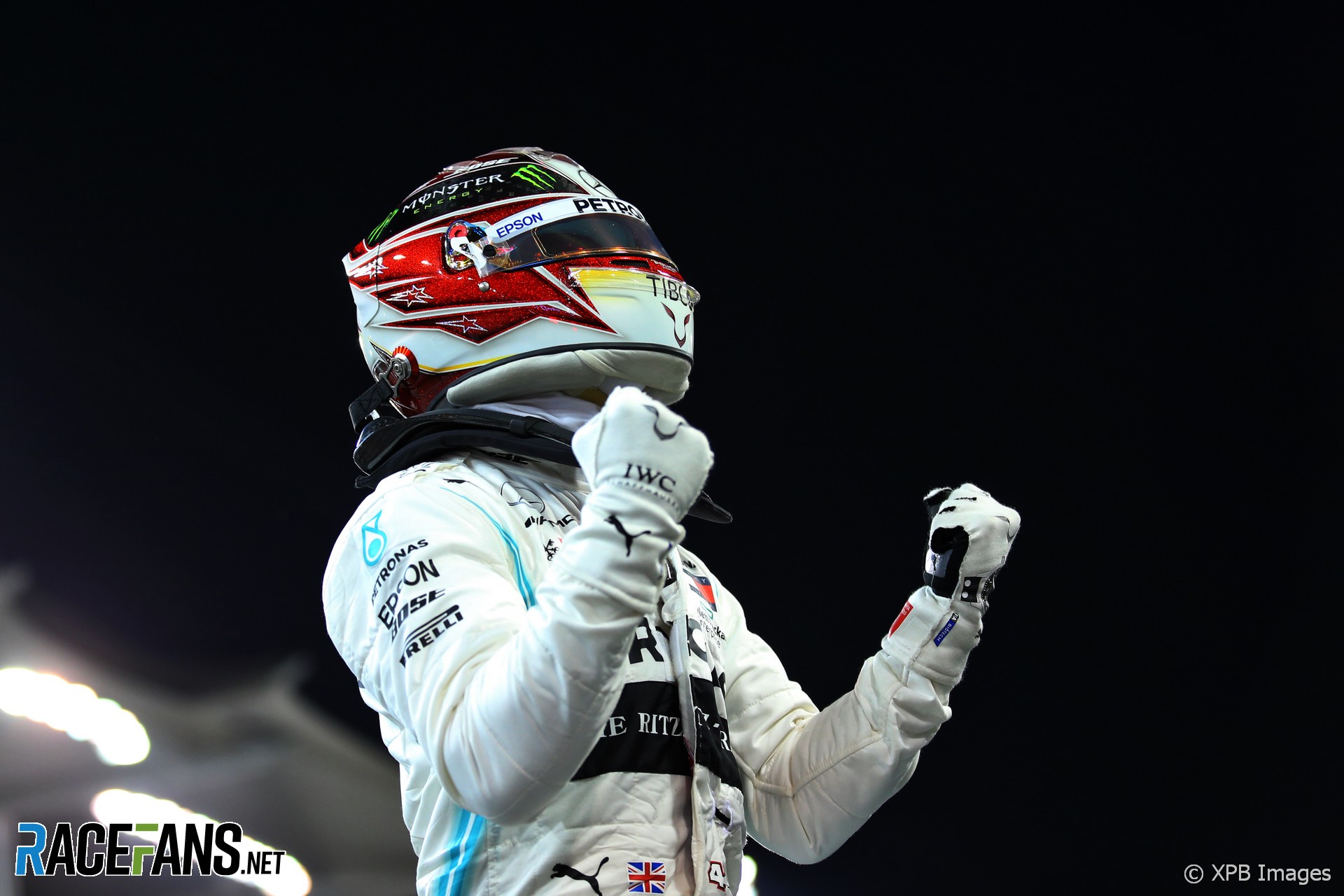 Lewis Hamilton couldn’t have asked for much more from the final F1 race of 2019.

Yas Marina has always been a strong venue for Mercedes, and they dominated proceedings this weekend. Had it not been for Valtteri Bottas’s penalty they would have swept the front row of the grid, and from there a one-two finish would have been likely, given he was able to rise from 20th to fourth in a race which featured no Safety Cars or VSC.

As it was, Hamilton led every lap and added fastest lap to his pole position, giving him the sixth ‘grand slam’ of his career. Only Jim Clark, on eight, has more.

Hamilton set a new record for leading the most races in a single season. This might have seemed unlikely after he failed to lead a lap of the season-opened in Melbourne. But he’s led at least one lap of every race since, except at Monza.

He also broke the record he set last year for most points scored in a single season, raising it from 408 to 413. Of course this record is heavily influenced by the number of races in a season (a record-equalling 21 this year, a new record 22 on the 2020 F1 calendar) and the points system, which only began awarding 25 points for a win in 2010.

This year drivers were also awarded a point for setting fastest lap. Hamilton took six of those bonuses, so without that he wouldn’t have set this new record.

And of course he took another step towards breaking one of F1’s biggest records. His 84th career win leaves him seven shy of Michael Schumacher’s tally.

Hamilton broke a third record by becoming the first F1 driver to score points in every race of a season twice. He did so this year and in 2017.

The only other driver to score in every race of a season was Schumacher in 2002 – and he managed then when points were only awarded to the top six.

[icon2019autocoursempu]Hamilton can break another record at the beginning of the 2020 F1 season. He scored points for the 33rd race in a row, equalling his own record from 2016-17. Astonishingly, had Hamilton not retired from last year’s Austrian Grand Prix with a fuel pressure problem, he would have scored points in every race of the past three years, a total of 67 races in a row.

Sunday was Hamilton’s 250th race start. He’s the ninth driver to reach this number, though Kimi Raikkonen is well ahead of him on 312, and should pass Rubens Barrichello’s all-time record of 322 next season.

Hamilton’s win and pole meant Mercedes did the double in Abu Dhabi for the sixth year in a row. Ferrari remain yet to win or take pole position at this venue. Hamilton’s 88th career pole position ended his nine-race streak without a pole – his longest since 2013 – and means he now has 20 poles more than any other driver in the history of the sport.

Max Verstappen ended the year third in the points standings, which is his highest ever finish. It’s also the best for a Honda-powered driver since Jenson Button’s third place for BAR-Honda 15 years ago. Fourth place for Charles Leclerc was his personal best, and the first time Sebastian Vettel’s finished behind by a team mate since Daniel Ricciardo beat him at Red Bull five years ago.

A last-lap pass by Carlos Sainz Jnr secured sixth place in the championship for the McLaren driver. Mercedes, Ferrari and Red Bull drivers have occupied the top six in each of the previous three seasons.

The last team from outside these three to get a driver into the top six was Williams in 2015. In a shocking illustration in how rapidly their fortunes have changed, the team finished last for the second year in a row this season.

Robert Kubica ended his last race for the team without a point and Sainz’s last-lap lunge meant the same happened to Nico Hulkenberg on his swansong drive for Renault. Hulkenberg departs the sport with the unfortunate distinction of having started 177 races without ever finishing on the podium – the most of any driver in F1 history.

Have you spotted any other interesting stats and facts from the Abu Dhabi Grand Prix? Share them in the comments.