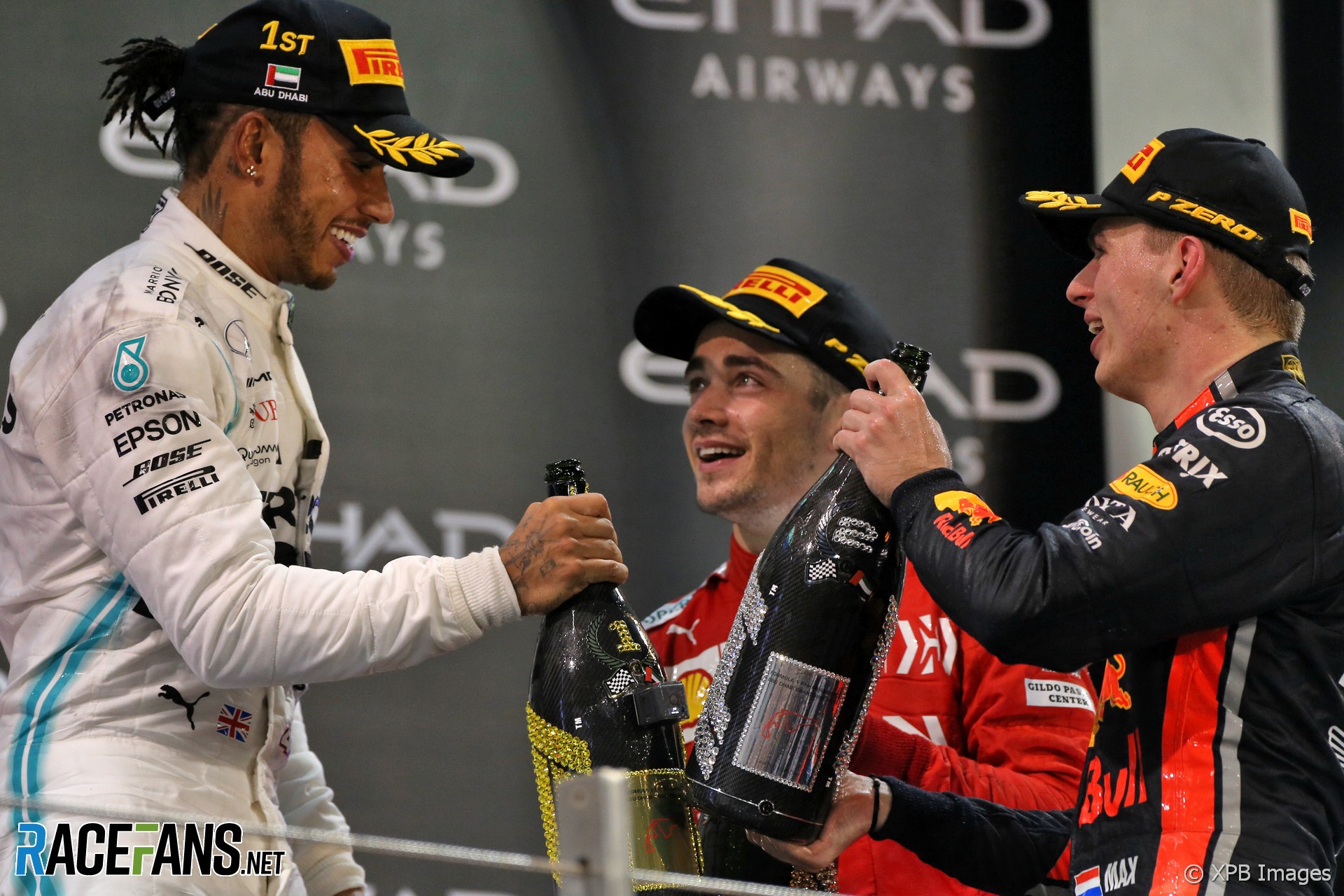 In Abu Dhabi, Formula 1 suddenly rewound to the start of the 2019 season. Lewis Hamilton and Mercedes were untouchable, Ferrari and Red Bull relegated to the role of impotent bystanders.

Valtteri Bottas would have been up there too had he not arrived as Yas Marina with an engine change penalty hanging over him, the legacy of his power unit failure in Brazil. Given that, it was perhaps not so bad that his title fight with Hamilton had fizzled out two races earlier, he observed.

Even so, Bottas stormed from the back of the field to finish fourth on a day when there were no Safety Cars and none of the top six had significant delays on their way to the chequered flag. That showed how crushing Mercedes’ superiority was.

There was drama three-quarters of an hour before the race started, as the FIA revealed Ferrari had failed a random pre-race check on Charles Leclerc’s car. The team was found to have put almost five kilograms more fuel in it than they had declared.

With the cars about to head onto the track to form up on the grid, the stewards’ deliberations could not begin until after the race. Ferrari decided not to trouble their driver with news of the development, and let him concentrate on the race.

That appeared to pay off at the start, when he pounced on Max Verstappen after the Red Bull driver ran slightly wide at turn seven. Leclerc used the Ferrari’s grunt to move up into second while Hamilton began building his lead from pole position.

That helped Leclerc in his bid to find the 12 points he needed to beat Verstappen to third place in the points. With both championships already won, this was one of a handful of significant contests further for the lower places.

Another was a three-way fight between Carlos Sainz Jnr and Pierre Gasly for sixth place. The pair were tied on points pre-race and Alexander Albon was within range as well. But Gasly’s hopes took a blow on lap one when Lance Stroll hit him from behind, spinning the front of his car into Sergio Perez’s right-rear wheel.

Stroll was immensely fortunate not to inadvertently wipe out his own team mate, and Gasly was left fuming over his rival’s driving as he limped into the pits for a new front wing. Making matters worse, the team discovered the screws in the nose were broken, which delayed the process of changing it.

Gasly’s delay helped Bottas gain five places from the back of the grid. He continued to gain ground, but his progress was delayed by an unusual problem with the Drag Reduction System. One of the data servers needed to send information to the cars had failed, so the entire system was deactivated as a precaution.

[icon2019autocoursempu]Bottas still had enough Mercedes grunt to get past some of the slower cars. Others were more obviously disadvantaged, such as Daniil Kvyat’s Toro Rosso. “I was stuck behind Kimi [Raikkonen] and I was much quicker actually.

“Maybe it helped [people] behind, but it didn’t help me because I was stuck behind also someone. It was very surprising. I was like ‘where is my DRS?’.”

Sebastian Vettel, who had started on the soft rubber, was also deprived of DRS in his efforts to get on terms with Verstappen. But having tested his rival’s defences early on he soon slipped back as his tyres began to fade.

Vettel clearly needed to pit soon but Leclerc, entertaining hopeful thoughts of winning, wanted to pit early in an attempt to provoke a response from Mercedes. So Ferrari brought both their cars in together on lap 12.

Their ‘stacked’ stops didn’t run entirely to plan. Leclerc was in and out quickly but Vettel lost around four seconds on the jacks. The delay cost him the chance to come out in front of the Renaults. Red Bull spotted this, and brought Albon in on the next lap.

His stop was clean, if not scintillatingly fast, and it wasn’t enough to bring him out ahead of Vettel. This was a rare strategic error by Red Bull: Albon had been lapping quicker than the Renaults on his medium tyres before pitting, and might have over-cut Vettel had he stayed out a few laps longer.

Mercedes shrugged off Leclerc’s early pit stop and left Hamilton out. The Ferrari was only faster than Hamilton for Leclerc’s first three laps out of the pits, then began to slip back from the race leader again. No one was going to trouble the world champion today.

The leaders ran at a similar pace until Verstappen headed for the pits on lap 26. Although his stop was clean, his car developed a turbo lag problem when he returned to the track. It persisted until the end of the race despite the team instructing Verstappen to make several switch changes.

It wasn’t a severe enough problem to prevent him passing Leclerc with ease, however. This was aided by the fact DRS had been re-enabled on lap 18, bringing to an end a brief but enjoyable period without the dreary ‘motorway’ passes DRS has supplied over the past nine years.

Antonio Giovinazzi had particular cause to be grateful for DRS being inactive after his superb lunge past Lance Stroll at turn seven. Had DRS been active, Stroll could have easily reversed the move on the long straights which followed.

Leclerc dropped back quickly and Ferrari elected to bring him in for a second stop, again on the same lap as Vettel. This brought the recovering Bottas within range of him at the end of the race, though the Mercedes driver ran out of time to pass the Ferrari for the final podium place.

Vettel, however, was able to pick off Albon for fifth on the penultimate lap. But neither can have been expecting to finish the race behind the number 77 Mercedes.

Behind them the scrap over the top midfield places provided some late-race drama. The race badly needed it, even if it was tainted by the knowledge it had come about largely because those who qualified in the lower half of the top 10 were disadvantaged by having to start on old tyres.

Seventh place was decided in a fight between Lando Norris, the highest midfield qualifier, and Sergio Perez, the highest new-tyre starter. Norris stood his ground superbly until the final lap, when Perez finally forced his way past the McLaren.

Daniil Kvyat followed them home in ninth. That turned out to be a galling result for Gasly, who’d started two places ahead of his team mate. He lost sixth in the championship on the final lap, when Sainz threw his McLaren down the inside of Nico Hulkenberg’s Renault at turn 11, grabbing the final point and sixth place along with it.

It was a blow for Gasly’s team, too. With Renault failing to score, Toro Rosso could have snatched a best-ever fifth in the championship with both cars scoring. They fell short by just six points.

After the high of Brazil, Alfa Romeo had a horrible weekend in Abu Dhabi. They split the strategies between their drivers and Kimi Raikkonen came off best, taking 13th, but little better could be expected in a car which was a massive 1.8 seconds slower than its predecessor around Yas Marina. Despite his excellent early pass on Stroll, Giovinazzi slumped to 16th at the flag, the pair separated by fellow Ferrari customers Haas.

Giovinazzi clashed with Robert Kubica early on, and the Williams driver brought his damaged car home last of the runners behind team mate George Russell and Pierre Gasly. Lance Stroll was the race’s only retirement, pulling into the pits after reporting a braking problem on his Racing Point.

Hamilton and the new generation

As usual there were more fireworks after the race than during it at Yas Marina. But the final podium of the year, confirmed once the stewards agreed not to impose a sporting penalty on Leclerc for Ferrari’s misdemeanour, fittingly featured three of this year’s brightest stars.

In just one season at the sport’s most famous team, Leclerc has made gigantic progress and out-scored a four-times world champion. Verstappen, wielding a huge amount of experience at this level for someone so young, has carried Red Bull in their first season with Honda power, and so consistently wrung the most from his car he ended the season ahead of both the faster Ferraris in the points.

“These guys have been doing a phenomenal job,” said Hamilton after ending the season with his 11th win of the year. “I feel really privileged to be in the period of time where they’re here and I’m looking forward to hopefully more close battles with us in the future. I hope it gets close for us next year.”

Many will be feeling the same way. But while it didn’t look that way in Abu Dhabi, the final races of 2019 have offered encouraging signs we will see a closer fight between these three – and perhaps their team mates as well – in 2020.