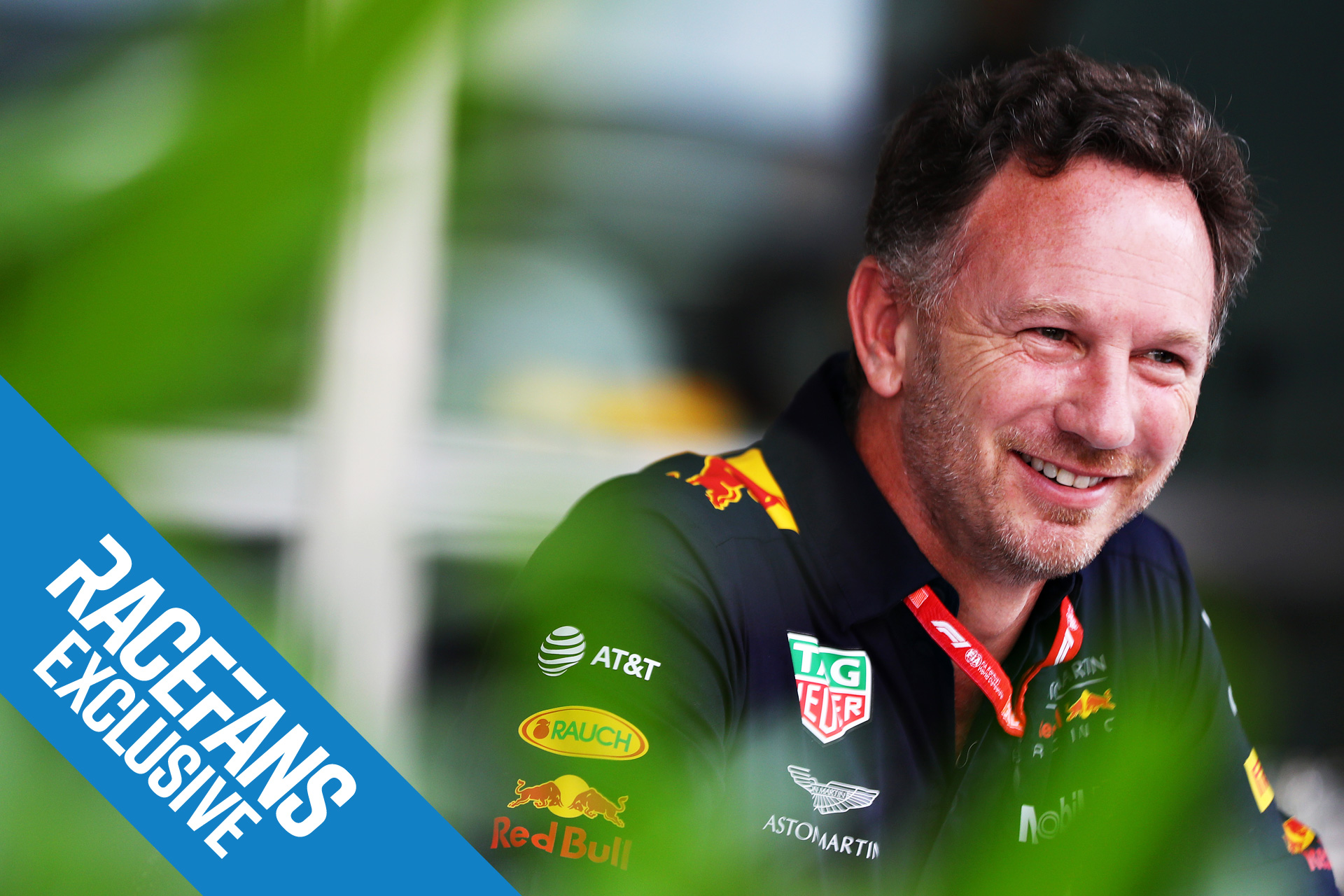 Earlier today Red Bull announced they and junior team Toro Rosso have extended their deals to use Honda power units in the 2021 F1 season. Whether they will be extended any further remains to be seen.

Prior to the announcement – and Max Verstappen’s third win of the season for the team in Brazil – @DieterRencken sat down with Red Bull team principal Christian Horner to get his assessment of their first season with Honda power, and the state of play in F1’s ongoing commercial negotiations.

The trend has been gradual but discernible. Over the years Red Bull Racing has lured key elements from McLaren, then taken them to greater heights than they achieved with their former team, certainly in recent years.

It started with the recruitment of Adrian Newey, arguably the gold standard among the current crop of technical directors. It continued with the signing of long-time McLaren partners TAG-Heuer and ExxonMobil. Then, for this year, Red Bull Racing announced a switch from Renault engines to the Honda power units so derided by McLaren’s former executives – while the Woking team went the other way.

The bottom line? Where McLaren has won only a single championship since Newey’s 2006 defection, Red Bull scored four straight double titles (2010-13). Both commercial partners featured on various winning Red Bulls over the past four years, but McLaren has not won a race since 2012.

Then, after McLaren lost all faith in Honda – its legendary 1988-92 engine partner – Red Bull had rewarded the Japanese company with two race wins during the first partnership season at time of this interview. Victory in Brazil still lay ahead when we spoke.

These were not fluke wins – the Honda-powered RB15 has real one-lap pace as well. Had it not been for a yellow flag indiscretion in Mexico, Verstappen would have four pole positions as well. Add their eight podiums (plus two for Toro Rosso) and it’s clear that Red Bull made an astute call by taking over McLaren’s Honda deal.

Still, Horner believes there is more to come in 2020. “I think overall there have been a lot of positives this year,” he told RaceFans in our exclusive interview. “It always was going to be a transitional year with a new engine supplier.

“We’re closer than we were 12 months ago. With stability of the regulations over the winter of 2019 into ’20, I think there’s an awful lot of lessons to come out of this year into next year’s car.”

True, the team benefitted by using sister team Toro Rosso as a guinea pig during 2018, which provided Red Bull Advanced Technologies – the overarching engineering supplier to both teams – with valuable experience and data. It soon became obvious there was a natural ‘fit’ between the various Red Bull elements and Honda that seemed lacking with Honda’s former team.

“During 2018, all our gearbox and drivetrain technology was supplied by Red Bull Technology. So that was a very good foundation for this year,” explains Horner, who contrasts the Japanese manufacturer with their predecessors, Renault.

“I have to say, working with Honda has been very much a breath of fresh air. They share the same vision, ambition that we as a team do. Their progress has been impressive, both from a reliability and the performance point of view. So yeah, on the whole it’s been only positive.”

Prior to the announcement of Honda’s continuation with Red Bull, Horner was not too troubled by the prospect they might leave. That would have been a problematic scenario for the team, as recent experience has shown neither Ferrari nor Mercedes are likely to supply their hardware to a team whose Newey-honed chassis might then beat them with it.

“First of all, today I don’t think anybody’s got a contract beyond 2020,” he begins. This is not so: prior to our interview, conducted during the United States Grand Prix weekend, Mercedes and McLaren had announced an engine supply deal from 2021.

“But so at the moment it’s a matter of obviously reviewing the agreements from 2021 onwards. Honda, I’m sure, will take into account everything before making their decisions for the future. But they’ve obviously been very encouraged by progress has been made to date,” he says.

“Honda is a big corporate entity and Formula 1 has been part of their DNA for so many years. But, you know, they have their own decisions to make regarding their activities. It’s a great fit between Red Bull and Honda, I think both parties have enjoyed the relationship so far.”

Often overlooked in F1’s insular world is that Red Bull enjoys successful partnerships with Honda in other, two-wheeled motorsport categories such as Moto GP and Moto-X/Supercross. It therefore enjoys leverage that other entities don’t have.

Another bridge to cross ahead of 2021 is F1’s switch to new regulations. But Horner sees positives from this long-debated change, thanks to the closer working relationship with Toro Rosso made possible by their use of the same engines.

“[It’ll] probably increase the synergies as part of a set of regulations. Obviously shared wind tunnels is something that’s being encouraged, so that’s something that we will do from 2021 onwards.

“Between the different elements of [car] parts, [a team] can be the manufacturer or supplier of parts. There’s a sensible balance there that plays to both teams.”

Although there has been component sharing between Red Bull Racing and Toro Rosso in the past, the level was not at that of, say, Ferrari and Haas, or even Mercedes and Racing Point. Will that approach change, particularly as such economies of scale are encouraged by the 2021 regulations?

“Well, in terms of whatever the regulations allow us to supply, obviously will be supplied” says Horner, “The synergistic relationship will, I think, increase, because, for sure, [Toro Rosso] will be utilising the best wind tunnel and whatever other tools or services or components that are allowed to be supplied.”

A potential threat to the smooth co-operation between Red Bull and Toro Rosso is Britain’s potential departure from the European Union. This has been argued over since the country’s 2016 referendum, and elections next month could lead to ‘Brexit’ happening before the start of the 2020 F1 season – or later, or never.

As team principals acknowledged recently, there is obvious scope for this to affect British-based teams. The Red Bull-Toro Rosso arrangement is particularly susceptible, as Red Bull Racing is based in Milton Keynes, UK (where Honda also have a base) and Toro Rosso operates out of Faenza in Italy, albeit with an aerodynamics base in Bedford, UK.

[icon2019autocoursempu]“I don’t think anybody knows what the effect of Brexit is at the moment,” Horner admits. “People spend so much time worrying and fussing about Brexit. When we know what it is, then we’ll deal with it.”

When Red Bull acquired Jaguar Racing in 2005 the grand plan was to brand the team primarily as Red Bull, but to commercialise the team to the extent that it became largely self-funding. While Red Bull funded the team to the tune of an estimated $65m in 2018, sponsorship income has increased of late by around $20m to $120m “including value in kind”.

With Honda also believed to be contributing, the overall budget has grown yet Red Bull’s injection remains static at $65m, which Horner describes as “cheap” [for the levels of exposure enjoyed].

“[2019] has been the biggest year we’ve ever had,” he acknowledges, pointing to title partners Aston Martin, ExxonMobil, AT&T, Honda, HPE (data centres) and Siemens as the major contributors before adding, “The amount of partners has grown, TAG Heuer, Citrix; there are numerous partners [now].”

Last year the team was rocked by the unexpected departure of Daniel Ricciardo to Renault. His successor Pierre Gasly was shipped back to Toro Rosso after his unsuccessful start to life at Red Bull, but following Austin the team’s motorsport consultant Helmut Mark told Gasly’s replacement Alexander Albon that his place at the top team was safe for 2020.

The constant is Verstappen, who is now Red Bull’s de facto F1 leader despite being but 22 years of age. “I think he’s really stepped up things of late this year as a senior driver,” says Horner, his admiration clear.

“I think he’s done a great job; he’s taken on that responsibility and he’s having some phenomenal races this year. He’s pushing the development and the direction of the development hard, and his feedback has been of exceptional quality.”

Is he world championship material? “Undoubtedly.”

Horner is also seeing steady improvement from Albon. “Alex stepped up into the pressure cooker,” he says. “He has acquitted himself very well against Max,” adding that Albon “is starting to provide useful data. We need to give Alex time because you know, this is his first year in Formula 1, but he is certainly contributing more and more.”

Albon’s rapid promotion to Red Bull, having originally signed a Formula E contract this time last year, has caught many by surprise. He hadn’t even driven an F1 car at the beginning of the year, so where does Horner reckon he is in terms of his personal development?

“Difficult to predict, that,” he begins. “Every weekend, if you were to revisit [that] again at the end of the weekend, for sure he’s going to take a lot more lessons into it.

“It’s been a very strong first year for him. He’s applied himself well, he’s working well within the team, and he’s impressed a lot of people.”

Red Bull’s Junior Team is notorious for its rapid turnover of drivers. But Horner sees signs of top-drawer talent in Albon.

“He’s very much F1 material, but how good he will ultimately be, I don’t know at the moment. He’s certainly doing a good job at the moment, and his potential looks very high.”

But despite the upheaval in both its driver line-up and engine supplier, Horner is satisfied with Red Bull’s season. “From an operational point of view, it’s been a tough year with the calendar. But I think it’s been a very productive year.

“We’ve embraced a new partner in Honda as a technical partner, [which has entailed] working closely with both Japan and Milton Keynes. I think we’ve laid the foundations for a solid future.

“On the fiscal side, I think we’ve just seen a general increase through the costs mainly dictated by what the regulations are and the inflationary costs that go with it and the additional activities that go with it [such as] extra parts for extra races.”

Given F1’s current pecking order – largely dictated by its inequitable revenue structure which will remain for one more season in 2020 – third place, nipping at the heels of two better-funded teams, is where Red Bull currently slots into the competitive order.

The mere fact that the team has snatched three victories indicates that it is punching well above its weight, driven primarily by three factors: a united, well-funded team operating at the very top of its game, an engine supplier absolutely determined to prove its detractors wrong by living up to its previous reputation as a world beater, and a young and extremely committed driver who relentlessly chases victory.

Heading into the final race of 2019, Verstappen leads his better-equipped Ferrari rivals in the standings. Perhaps it won’t be Mercedes’ Maranello rivals, but this team, which ends the streak of silver championship successes next year.

What are the ramifications of Red Bull’s decision to continue using Honda’s power units? Read @DieterRencken’s analysis on RaceFans tomorrow.

8 comments on “Exclusive interview: Red Bull’s Christian Horner on their successful start to life with Honda”