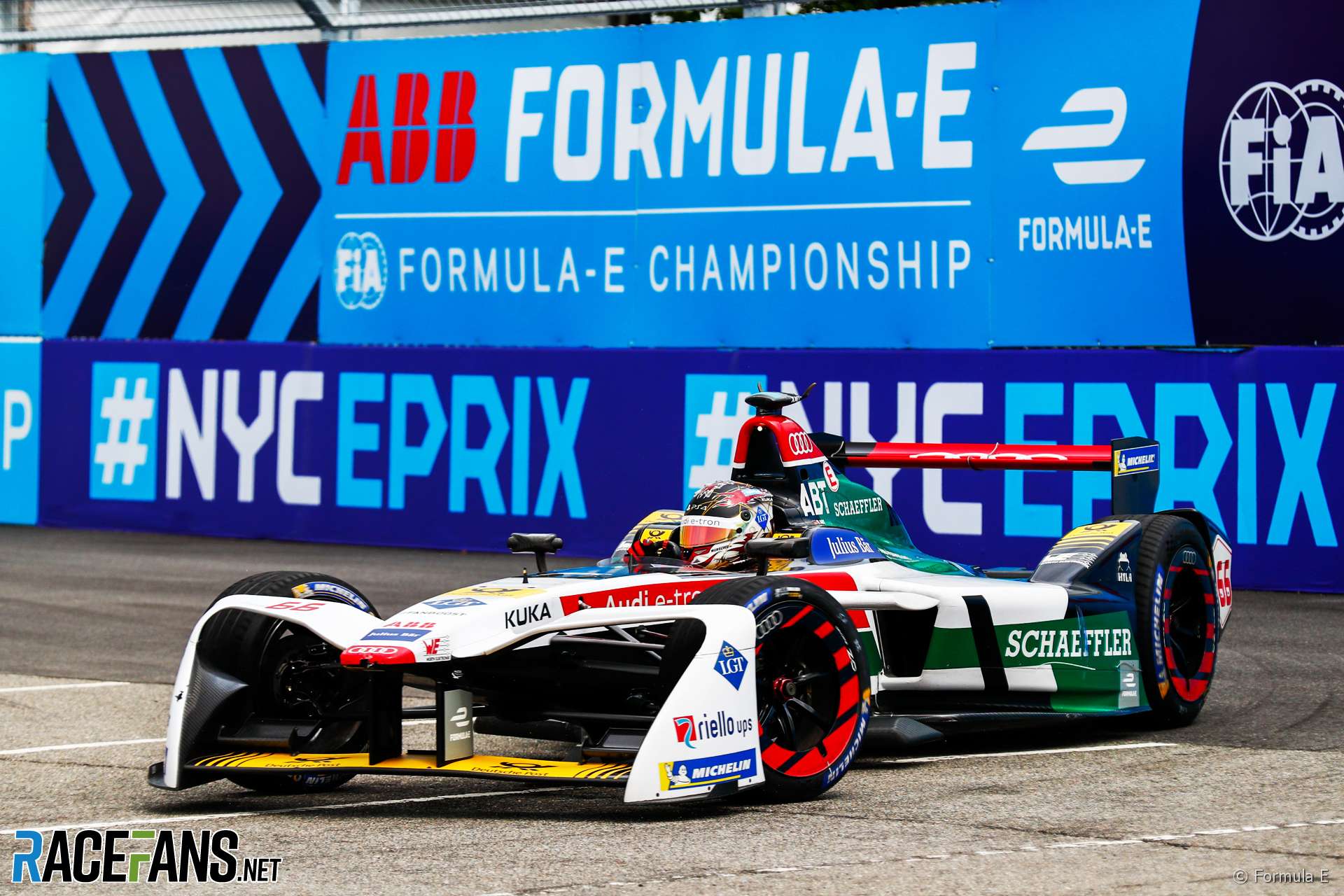 Formula 1 didn’t know it had a sustainability problem until Formula E came along. When F1 was majority-controlled by the CVC venture fund driven by a single objective, to squeeze every last drop of profitability out of its acquisition – and micro-managed by an octogenarian living in the past – the sport existed in a bubble, raising two fingers at the real world.

Then along came this electric up-start, established by the same FIA that governed F1, and founded by a youthful entrepreneur who combined a championship-winning motorsport background with a successful career in European politics. The category up-ended the established order by preaching green sermons in city centres across the globe.

Motor manufacturers fled F1 in the wake of the Global Economic Crisis and upon their eventual returns they embraced Formula E. At the last count there were eight ‘majors’ and three start-ups, attracted by reasonable budgets which enable them to brag about green credentials at a fraction of F1 budgets. So what if TV and live audiences were a fraction of F1’s? Perception counted, and perception is reality until categorically disproven.

So successful was FE perceived to be that folk inside and outside the nascent series predicted F1 would soon turn electric or even converge with the upstart, which holds exclusive rights with the FIA to promote electric racing until 2039.

Such talk of convergence, though, overlooks the fact that electric vehicles have very real limitations, and that 90 per cent of the 1.1 billion vehicles on global road networks are powered by internal combustion engines running on carbon fuels.

Regardless of how FE ultimately turns out, the series could at best make a minor dent in world’s ICE vehicle parc, and even that could take up to 30 years to take effect. Better, surely, to ensure that the billion automobiles have access to zero-carbon fuels than replace them with electric vehicles with well-documented limitations. Imagine the environmental impact of a billion dumped cars…

This is where F1 plans to come into play. Its cars are already powered by the most efficient ICE-hybrid engines in the history of the automobile, which deliver record-setting thermal efficiencies of over 50 per cent. These power units are ideally placed to act to as rolling laboratories for synthetic and bio-fuels.

Just as F1 engines of old acted as high-performance test beds, so new-gen power units are poised to lead the low-emissions charge, all while delivering a bigger and arguably better aural sporting spectacle than does FE.

It has taken F1 as a whole 10 years to grasp the environmentally-friendly potential of its power unit. The hybrid engines were formulated in 2009 amid much criticism. But the sport’s new owners, Liberty Media, took less than a fifth of that time to recognise it, and formulated its zero-carbon sustainability plan, announced yesterday, in under 12 months.

F1’s major issue as a hydrocarbon-burning series is that its cars are perceived to be ‘dirty’ monsters, whereas FE is seen as whiter than the driven snow. The truth is, though, that just 0.7 per cent of F1’s carbon footprint of 256,551 tons annually is generated by its ICE engines. The rest is created by the ‘show’ and, crucially, in this regard F1 ranks lower than the Olympics or FIFA World Cup in terms of emissions.

Thus F1 formulated an extensive global sustainability programme, launched earlier this week, which stands on two ‘pedestals’: its own emissions, and ‘show’ emissions, with each pedestal aiming at stringent targets. In order to achieve the objectives Liberty engaged environmental and sustainability experts to undertake in-depth studies, in the process canvassing teams, drivers, fans and promoters.

To kill perceptions that F1 is a dirty simply because its cars run on hydrocarbon fuels, the objective is to move towards a net-zero carbon footprint, with the major focus being on power units, to be fuelled 100% by fully advanced, sustainable fuels by 2030. Whatever fuel is ultimately mandated will be second-generation, i.e. will; not divert crops to fuel, whether directly or through land usage.

Such a move obviously holds major implications for the global vehicle parc, for if synthetic and/or biofuels are developed for F1, these will eventually trickle down to road car usage – thus ultimately benefitting the planet.

However, regardless of how effective this initiative proves, it will impact on at most 0.7 per cent of F1’s overall footprint. Still, disposal of hybrid energy storage devices (batteries), remains a tricky area – although Formula E has a similar and potentially greater problem in this regard given its total reliance on batteries. F1 is in discussions with teams and their suppliers as to the best way forward.

Whichever battery disposal route is adopted will also benefit the hundreds of thousands of electric vehicle owners who will at some stage need to scrap batteries at the end of their useful life. Forget not that as the electric vehicle parc ages, this problem will mushroom.

Still, all power unit-related sustainability is but a relative drop in the ocean, for nearly half of F1’s 256,500 ton annual carbon footprint, is generated by logistics and freight involved in taking the ‘show’ to its audience.

Here F1 has a major advantage over other global sporting spectaculars, who expect their million-strong fan bases to travel to their ‘shows’, primarily by air, for extended periods. By contrast, F1 is largely able control its own footprint.

Thus F1 plans to moving towards regional hubs, using sea-freight wherever feasible, with a switch to low-emission air transportation rather than relying on an aging fleet of Boeing 747 aircraft being step two. Within Europe road transportation will be by an advanced low-carbon fleet, while improved calendar efficiencies, which cluster events in close proximity to each other, will also come into play.

The next biggest footprint – at 28 per cent – is that created by travelling F1 personnel and team and partner employees, and, again, this is largely controllable, particularly when calendars are streamlined. Reductions in headcount due to impending cost controls and improved team efficiencies will also reduce F1’s environmental impact.

With approximately 20 per cent of the footprint generated by F1’s production processes – already exceedingly low given the efficiency of the vast factories operated by Mercedes and Ferrari – ever-more stringent restrictions placed on wind tunnel usage and simulations will further reduce emissions, while increasing duty cycles or controlled usage of production-intensive components will do their bit.

It stands to reason that if 12 front wings used over a year generate 12 carbon measures, restricting teams to, say, five homologated wings will substantially reduce emissions, whether on a linear basis or not, while inter-team transfer as facilitated by the 2021 technical regulation will further reduce emissions. Extend this thinking to all component groups, and the impact is substantial.

Internally, Formula 1 plans to go completely carbon-neutral at its Biggin Hill and St James Square sites within the next couple of months via 100% renewably-powered offices. Any gaps will be offset through breakthrough CO2 sequestration processes – which involves capturing and storing carbon dioxide – and not simply through the issuing of cheques. Yes, an element of tree planting could result, but the initial focus will be on sustainable practices.

As part of this process F1 plans to target its on-event footprint – the emissions created by broadcasting, support races, Paddock Club operations, circuit energy use, generator use, etc., but excluding power unit emissions. This category contributes almost eight per cent of the total, or over ten times that of the power units.

In order to achieve its objective of being totally carbon-neutral by the end of next decade, F1 will harness its considerable technical and scientific expertise to pioneer and innovate solutions that either trap carbon, use it more efficiently, or, in the best case scenario, ‘scrub’ it from the atmosphere to ultimately benefit wider society.

Where Pedestal 1 commits F1 to manage its sporting activities to achieve zero-carbon status by 2030, the second pedestal provides the blueprint to ensure that every grand prix on the F1 calendar is totally sustainable in kits own right by the middle of the next decade by focussing on off-track activities and those functions that do not directly involve the cars and/or F1 personnel.

Thus by 2025 all materials used in the paddock, at grands prix and events such as fan festivals, in fan zones and hospitality areas, and in spectator viewing areas will be either sustainable, recycled or re-used – with an outright ban on the use of single-use plastics within the circuit perimeter.

While the footprint of fans is obviously difficult to gauge or control, F1 plans to capitalise on the fact that F1 events travel to the fans, and not vice-versa. As a general rule, around 70 per cent of fans at a grand prix hail from the immediate area, with 20 per cent travelling from a nearby state or country. The balance comprises international ‘interest’, some of whom were travelling the region in any event.

Contrast this with the expected foreign interest at, say, Qatar’s 2022 World Cup or actual attendance during Japan’s recent Rugby World Cup, and it is clear that F1 holds some major advantages over single region events. However, F1 fans still travel to the circuit, and thus Liberty plans to offer incentives to those who use public or carbon-free means of transport, with optional carbon of-setting offered to the balance.

Liberty further recognises that sustainability is not simply about minimising or clearing away dirty air, but about welfare and well-being – and thus spectator facilities will be vastly improved, particularly in hot areas, while a quota of tickets available for disadvantaged members of the community across all age groups to attend an event they normally would not be able to afford.

Finally, as part of the second pillar, F1 plans to involve local businesses and charities in staging events to ensure that they build sustainable local operations off the back of F1. For example, at present all Paddock Club personnel are flown in from across Europe, while the security staff hail largely from Austria. Imagine the potential carbon saving from using local staff instead.

Taken overall, F1’s sustainability plans are not only step in the right direction image-wise, but absolutely crucial to the long-term survival of the sport, for already environmentally-conscious audiences were switching off due to (incorrect) perceptions about the cars, while sponsors and partners were heading to Formula E, lured by the category’s perceived ‘greenery’.

Liberty now needs to convert this week’s announcement into clear-cut action with an absolute minimum of delay, and it will be fascinating to observe how it goes about that crucial element. However, now that the sport has chucked the environmental gauntlet directly at FE, the electric championship will no doubt respond with further activities and environmental actions plans of its own.

These will in turn spur F1 to greater heights, with the competition between the two premier FIA series hopefully resulting in ever-improving sustainability programmes, which will ultimately benefit all road users – and, by extension, the greater world – regardless of whether their vehicles are powered by IC engines or electric motors.

Motorsport as a whole at the vanguard of global sustainability? Whoever would have thought that just 12 short months ago…