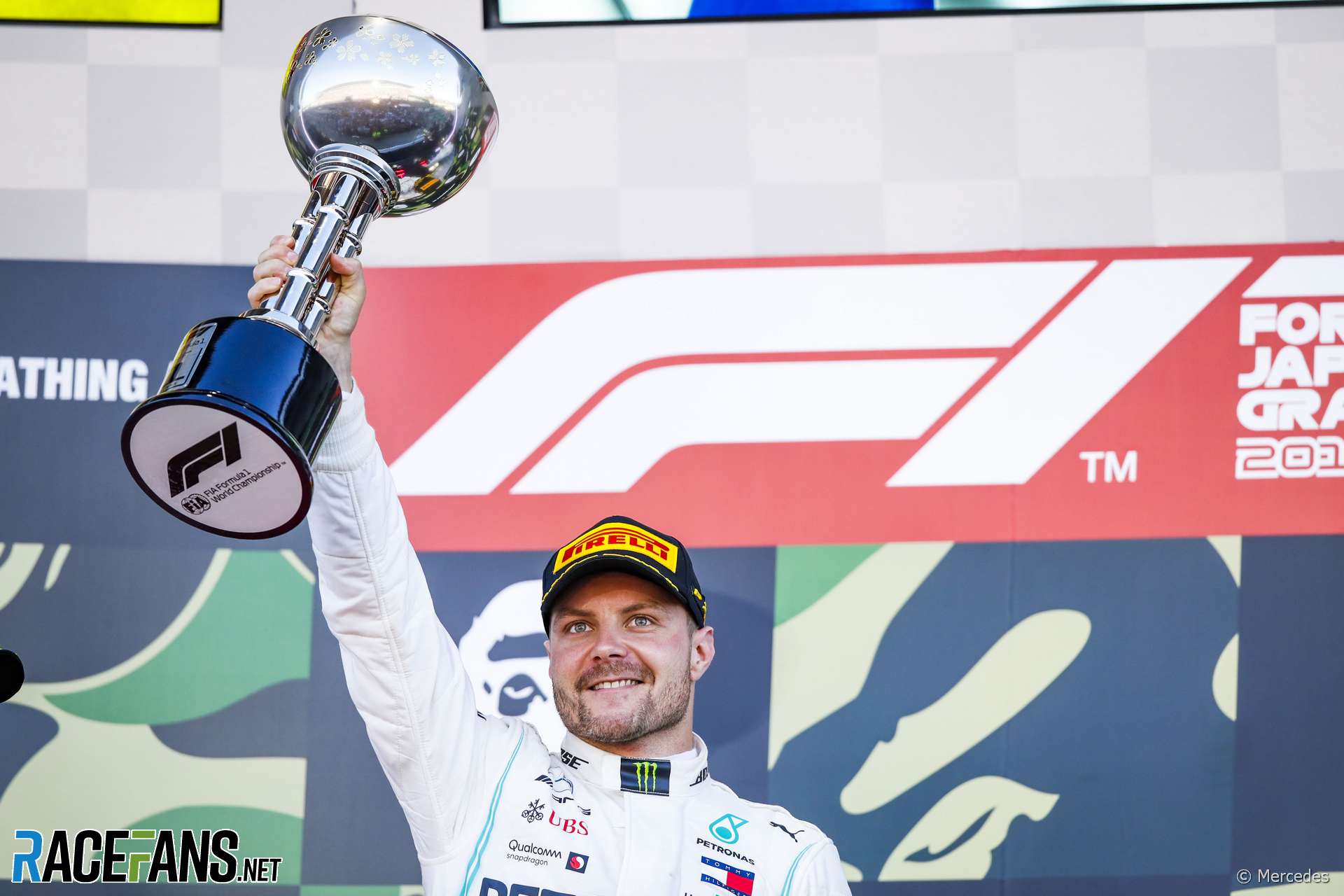 A great deal of rain – courtesy of Super Typhoon Hagibis – stopped play at Suzuka on Saturday. So when Sebastian Vettel climbed out of his Ferrari having set pole position for the Japanese Grand Prix, he did so in the knowledge he’d be strapped back in a few hours later for the race.

With Vettel on pole for the first time in 10 races, team mate Charles Leclerc alongside, and two Mercedes which looked quicker over a stint behind them, this looked set to be an absorbing contest.

But yet again Ferrari found a way to squander a chance of victory. The first fault came courtesy of the driver on pole position.

“The lights were on a long time,” said Vettel afterwards, “but it was my mistake.” With all five lights glowing, the SF90 on pole position twitched forwards. Luckily for Vettel, it did not stray beyond its starting box, and the stewards judged it was not moving when the lights went out. It was a very close call, however.

Vettel avoided the fate of Kimi Raikkonen in Russian when he jumped the start: A drive-through penalty plus two penalty points on his licence (not the thing Vettel needed as he went into the weekend on nine, three shy of a one-race ban). But he didn’t get away especially well either.

“I lost momentum them. So I ended up worse than just having a poor start, it was a really poor start.” It wasn’t a great getaway for Leclerc either, who admitted he was “distracted” by his team mate.

Valtteri Bottas took full advantage, sweeping around both SF90s from third on the grid. Lewis Hamilton, who started alongside his team mate, couldn’t get past either of them, pinched into a diminishing gap on the inside of turn one.

For once, Max Verstappen got away very well, and fate conspired to punish him for it. Leclerc tried to tuck in behind Bottas and Vettel at turn two, but washed out wide in the dirty air. He knocked Verstappen off, damaging his own front wing and sidepods but doing much worse damage to the Red Bull.

Carlos Sainz Jnr took the opportunity to nip past Hamilton but the Mercedes driver lunged back down the inside at turn three. Sainz, wisely, made way.

Hamilton’s reward for that bold re-pass was to spend the next three laps behind showered by bits of Ferrari. Leclerc was told by the team to pit at the end of lap one, but the call came very late, and Leclerc queried it as he drove past the pit lane entrance. The next time around his front wing began to fall apart and his left-front end plate took Hamilton’s right-hand wing mirror off.

Ferrari then decided so much of Leclerc’s wing had fallen off he was safe to continue. FIA race director Michael Masi did not agree and told the team to bring Leclerc in. Curiously, though Masi recently revived the use of the black-and-white flag as a means of publicly warning competitors over their driving standards, he did not reach for the black-and-orange flag which requires drivers to pit for technical attention.

He finally came in for a new front wing after three laps. However Ferrari didn’t bother to remove the damaged left-hand mirror which Leclerc had been holding in place – even through 130R – with his right hand. That flew off later, leaving so much of Leclerc’s SF90 strewn about Suzuka he was lucky not to get fined for littering.

This left Leclerc fighting his way back from the front. His progress was briefly halted by Verstappen, who gave the Ferrari a perfunctory squeeze as Leclerc blasted pass, DRS open, on his way to turn one. Verstappen called it a day not long after, unable to get through the midfield due to his loss of grip and therefore unlikely to score.

At the front, Bottas was only 2.6s ahead of Vettel by lap nine. But on Friday Mercedes had observed how quickly Ferrari’s tyres went off over a stint, and as Binotto explained the changes they made for qualifying didn’t help their race performance.

“On Friday we got tyre degradation and we worked [on] the set-up for the quali and the race. We dropped the rear wing for quali and race which helped as well the front balance.

“The car felt better [on Sunday]. I think we’ve got the right pace in the quali but not in the race still. We’ve got some tyre degradation higher at least to our competitors.”

In the next five laps Bottas more than doubled his lead. “Mercedes was quite quick in the race, especially at the back of the stint, they had more pace than us,” said Vettel. “Valtteri was flying at the end of the first stint.”

Hamilton also closed on Vettel – having been over three seconds behind he was almost within DRS range as lap 15 began. But Mercedes hesitated, opting against bringing him early to gain the benefit of the fresh tyre ‘undercut’ on Vettel. After Hamilton said this was the route Mercedes should have taken.

“Valtteri had a very good gap [in] the first stint,” he said. “He didn’t have to stop early because he clearly had a good enough gap. They should have stopped me before Seb to undercut him but it’s always an afterthought.”

As in Singapore just two races ago, Mercedes missed the chance to bring Hamilton in early enough. Why was this? When Ferrari brought Vettel in, he came out behind Sainz. The Ferrari driver was able to clear the McLaren quickly. Perhaps Mercedes, knowing their straight-line performance is not quite a match for Ferrari’s, didn’t want to take that risk.

By lap 22 the leaders had made their first stops. Bottas now had over 11 seconds on Vettel, with Hamilton almost 10 seconds further back. But while Bottas had switched to another set of soft tyres, and therefore would be pitting again, Hamilton had switched to mediums and could theoretically run to the end.

This thought played on Bottas’s mind as the stint wore on. “When Lewis didn’t stop for his second stop I was slightly concerned that maybe his tyres would last to the end and he could actually make it, because he had a decent gap to me,” he said. “But obviously he was on the medium and I think that tyres would have struggled massively at the end.”

Even so, Bottas wasn’t sure how conservative to play it. “At that point actually I had some margin to save the engine a little bit for the future races,” he said “So that’s why I was asking if I really needed to go full gas.”

Hamilton never had enough of a lead over Vettel to pit and come out ahead of the Ferrari. But the next car behind, Alexander Albon, was over 40 seconds behind. Mercedes therefore had little to lose by leaving him out, telling him to let Bottas through, and trying to keep Vettel behind.

“I was surprised when they pitted to be honest,” said Vettel. “I expected him to stay out and try the one-stop.”

As usual, Hamilton did not disguise his frustration on the radio, calling the strategy a “fuck up”. Afterwards he said the team “should have at least got a one-two today but I think the strategy wasn’t optimum for me.”

Mercedes’ inability to get Hamilton ahead of Vettel makes it hard to imagine they could have out-manoeuvred one or both Ferraris had they made better starts. Nonetheless Vettel believed that “with the lack of pace” Ferrari had “probably second was the maximum.”

Verstappen and Leclerc’s contretemps opened the door for Albon to take fourth. He took it thanks to a bold lunge down the inside of Lando Norris moments after the McLaren driver was warned on the radio that his right-front brake was cooking because his ducts were full of bits of Leclerc’s Ferrari. A swift pit stop fixed that but condemned him to a point-less afternoon.

Sainz scooped ‘best of the rest’ honours which ensured McLaren eked out more of a points advantage over Renault. It was a grim morning for the black-and-yellow cars as Daniel Ricciardo dropped out in Q1 and Nico Hulkenberg had a hydraulic leak in Q2. But they bounced back in the race, Ricciardo taking sixth after Leclerc’s escapades earned him two separate penalties, and Hulkenberg adding another point for 10th.

They may yet lose those points, however, following a protest by Racing Point over their braking system. Sergio Perez took a particularly lucky ninth place for them as he crashed out on the final lap trying to pass Pierre Gasly. It later transpired the chequered flag signal and been shown early to Bottas in error, therefore under the rules lap 52 became the final lap instead of 53. That also meant no 10th place point for Lance Stroll.

Gasly had to wrestle with an ill-handling car due to a suspension problem. Team mate took 12th ahead of Norris, while the Alfa Romeo pair were surprised with their uncompetitive, point-less afternoon. Kimi Raikkonen and Antonio Giovinazzi sandwiched Romain Grosjean in 14th, 15th and 16th places.

Kevin Magnussen limped in 17th after a poor day which include a qualifying crash and a slow pit stop. Robert Kubica also crashed in qualifying and was unhappy with Williams’ decision not to use a new, allegedly 2020-spec front wing for qualifying and the race. He was classified 19th behind his team mate, despite George Russell being summoned into the pits on his last lap as he struggled with his brakes all race.

Too little, too late for Bottas

Hamilton may have four wins at Suzuka, yet oddly it’s never been one of his strongest venues. Bottas capitalised on that the way many expected him to in Russia, and took a useful nine-point bite out of his team mate’s championship lead.

But it is surely too little, too late as far as the championship is concerned. He is 64 points adrift with 104 available over the remaining races, and Hamilton could clinch the title next time out in Mexico.

In much the same way, Ferrari’s failure to capitalise on clear chances to win this year has already cost them the constructors’ championship. Bottas’s win ended that title fight with four races to spare, meaning the silverware stays in Brackley for another year.

8 comments on “Third win is too little, too late for Bottas”