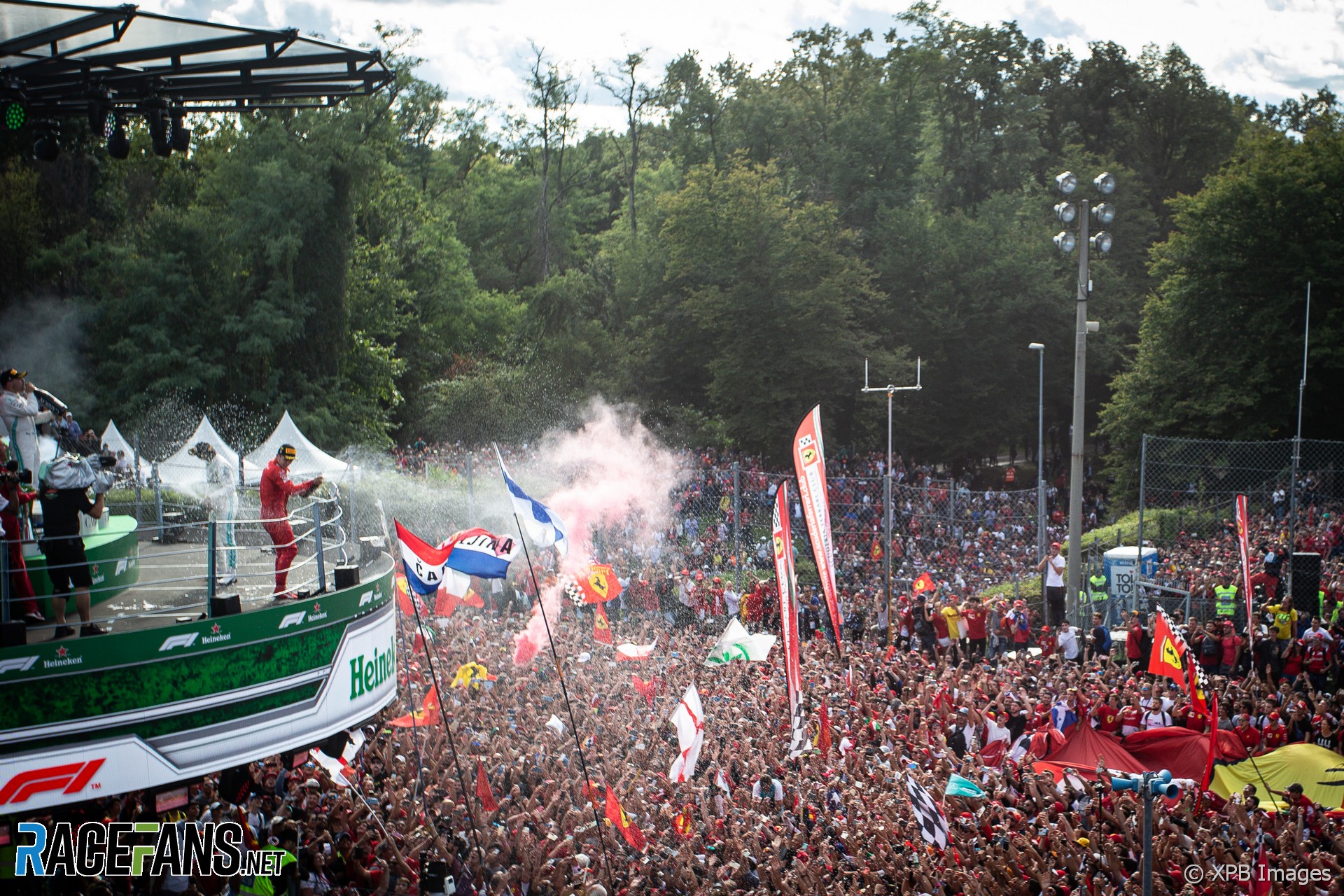 Less than a year ago, Ferrari announced it was appointing a bright new star to its Formula 1 team. At the time, there was some scepticism over whether a tender 20-year-old, with just 14 F1 starts to his name, was ready for the chance to drive for the sport’s most famous team.

Last weekend, Charles Leclerc fixed his star in the firmament over Maranello. It wasn’t just that he won at Monza on his first visit as a Ferrari driver. Or that he ended Ferrari’s nine-year wait for a home win – the longest in their storied history.

It was because he single handedly saw off a two-pronged attack from Mercedes, winners of the last five races at this track, on a day when his four-times title-winning team mate was embarrassingly out-classed.

The anticipation could scarcely have been higher before the start of the race. Until Leclerc’s breakthrough win at Spa seven days earlier, 2019 had been a barren season for Ferrari in terms of wins.

But after Spa the team knew that if its dragster-like SF90 could win anywhere it must be at Monza. No other track would offer as great an opportunity. Leclerc knew he had to seize it.

Qualifying left him stranded at the sharp end of the grid. The two Mercedes drivers separated him from his team mate. And at first Vettel slipped further out of contention: While Leclerc held his lead from Lewis Hamilton and Valtteri Bottas at the start, Nico Hulkenberg’s Renault nipped past Vettel into fourth.

Vettel reclaimed the place immediately, the Ferrari’s prodigious horsepower ensuring he got the job done on the start/finish straight as lap two began, without the assistance of DRS. Clearly, anyone hoping to pass a Ferrari would need a strong power unit and an efficient car.

Sure enough, while Leclerc couldn’t shake Hamilton in the first stint, not could the Mercedes driver draw close enough to attack. Hamilton had been in the same situation at Spa, on which occasion Ferrari brought Leclerc into the pits first. This time Mercedes got the jump, calling Hamilton in for his sole pit stop on lap 19.

Mercedes gave Hamilton a set of medium tyres. They hadn’t run the hards in practice and the softer rubber would maximise his opportunity to attack on the out-lap. Sure enough, he banged in the fastest sector times so far while Leclerc headed for the pits.

Ferrari had run the hard tyres on Leclerc’s car on Friday and judged they were the better choice. As well as giving him the durability to run to the end, they promised to protect him from Bottas running a longer first stint. Bottas stayed out seven laps longer before pitting for his own set of mediums, but rejoined over nine seconds behind the leaders, and had to take some life out of his tyres to bring them within range.

Leclerc sees off the Mercedes

By then Hamilton had already lost out in his first skirmish with Leclerc. The pair caught Nico Hulkenberg’s third-placed Renault and picked their way around it as they rounded Parabolica. This gave Hamilton a shot at Leclerc, who covered the inside line at the Rettiflio.

Hamilton stayed on the attack up to the Roggia chicane. Here he drew alongside on the outside but Leclerc squeezed him hard, leaving less than a car’s width for the Mercedes. Hamilton, thinking of the championship, took to the run-off and scampered back onto the track.

“He didn’t leave a car’s width there, he pushed me off,” fumed Hamilton on the radio. Gasly was shown the black-and-white flag.

That proved Hamilton’s best chance to overtake the Ferrari. Leclerc appeared to be feeling the pressure, and cut across the Rettifilio chicane at one point. He was playing a risky game: In Saturday’s Formula 2 race the stewards gave Sergio Sette Camara a five-second time penalty for doing the same, ruling that he stayed ahead of Nyck de Vries by doing so.

But as the stint wore on Hamilton’s tyres began to fade. Bottas was drawing the leaders in, and soon it was Hamilton who locked up at turn one. He dodged through the escape road and handed the baton to his team mate.

With four laps to go Bottas suddenly cut deep into Leclerc’s lead, bringing him within half a second. The fight for victory was still on. But as they lapped Lando Norris’s McLaren Bottas ran deep at the Rettifilio. Leclerc edged back out of DRS range. After Bottas closed again, another mistake at the Roggia let Leclerc off for good.

At Spa Leclerc was understandably muted after his victory, which came just 24 hours after the terrible crash which claimed the life of Anthoine Hubert. He hadn’t forgotten his friend at Monza, where he continued to carry ‘RIP Tonio’ stickers, but this time a celebration was fitting, and he roared with relief on the radio after crossing the finishing line.

Vettel’s only involvement in the fight for victory came when Leclerc and Hamilton lapped him. This was long after the mistake which ruined his race, which he then compounded with an appalling error of judgement.

Heading into the Ascari chicane on lap six, Vettel’s SF90 swapped ends on him. He has been unhappy with the rear balance of the car for several races, but even so this unforced error came as a surprise.

What Vettel did next would have been unfathomable at the best of times. But it beggared belief to see a driver of his experience, just eight days after a T-bone crash claimed the life of one F2 driver and leave another in intensive care, pulling into oncoming traffic in the middle of a fast corner.

Lance Stroll slammed on the brakes and swerved aside yet Vettel’s Ferrari kept rolling forward until the pair made contact. Any sympathy for Stroll quickly vanished as he proceeded to do much the same to Pierre Gasly, who dived off the track to avoid a collision.

A 10-second stop-and-go penalty for Vettel and a drive-through penalty for Stroll followed, condemning both to finishes outside the points. In light of recent events, the stewards should have dealt with them far more severely, as the consequences could have been horrendous.

Renault underlined the improvement they have made with their power unit this year, yet also demonstrated their chassis is light on both downforce and drag, as Daniel Ricciardo led Hulkenberg home in fourth and fifth, which was their best result for over a decade.

The Red Bull pair could only manage sixth (Alexander Albon) and eighth (Max Verstappen, 15 seconds behind his team mate despite starting last and breaking his front wing on the first lap). A superb drive from Sergio Perez, who recovered from an engine failure in qualifying to finish seventh, split the pair.

Following his crash at Spa, Antonio Giovinazzi went some way towards redeeming himself with ninth place, and becoming the first Italian driver to score points at home since Giancarlo Fisichella and Jarno Trulli 13 years ago.

Lando Norris bagged the final point on a frustrating day for McLaren. While Renault cut a huge lump out of their points lead, Carlos Sainz Jnr lost a likely points finish when the team failed to fit his right-front wheel correctly during his pit stop, for which they were later fined €5,000.

Gasly finished within two seconds of Norris, who had passed him when Stroll forced the Toro Rosso wide. Stroll and Vettel came in next, the Ferrari driver having been so badly delayed it took him until his final lap to pass George Russell’s Williams.

Unexpectedly, Russell led a couple of Williams’ rival teams home at a track where the FW42 was expected to struggle: Kimi Raikkonen was 15th after taking a stop-and-go penalty because Alfa Romeo put the wrong tyres on his car, and Romain Grosjean was a distant 16th, followed inevitably by Robert Kubica.

It has taken Leclerc only 12 months to prove his worth as a Ferrari driver. This will come as little surprise to those who observed his rise through the junior categories and cheered Ferrari’s rare gamble on youth.

But the speed with which he has asserted himself as the team’s top driver has surely caught many by surprise. Including, above all, his team mate, who now trails him both in terms of wins and points this year.