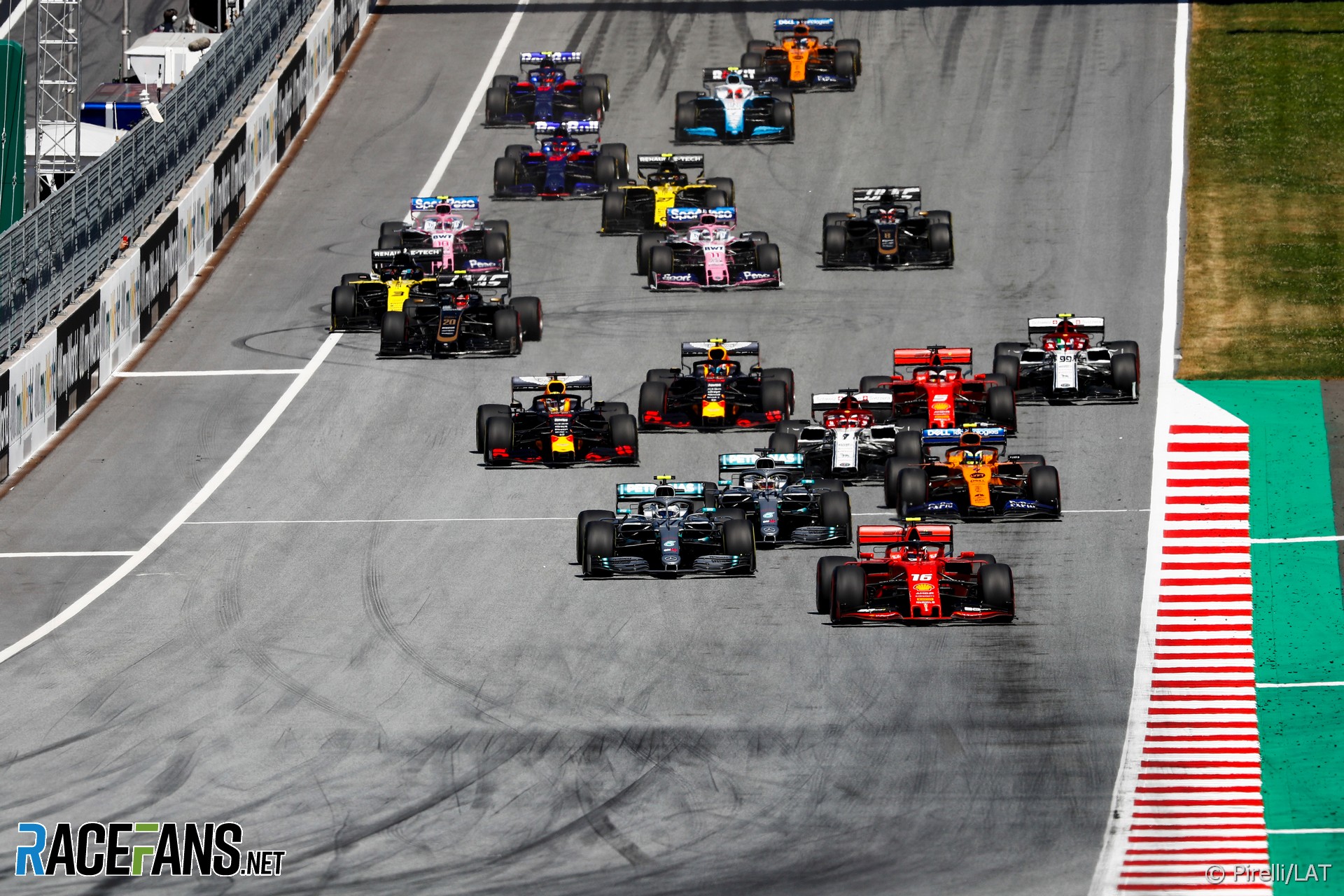 As the clock continues counting towards 31 October, the deadline for publication of F1’s ‘new era’ 2021 Sporting, Technical, Power Unit and Financial Regulations, a number of provisions and clauses are gradually dropping into place after a number of meetings were convened by the FIA and F1 with the sport’s relevant Working Groups.

The motivation behind the delay was always to ‘fine tune’ the regulations rather than push for massive changes during the intervening four months, and thus the regulations as prepared for the 14 June sitting of the FIA World Motor Sport Council are expected to remain largely as-is save for clarifications or certain revisions.

The media release issued by the FIA after that meeting stated: “While the core objectives outlined for the future set of regulations of the championship have been defined, in the interests of the sport it was agreed that the best outcome will be achieved by using the extra time for further refinement and additional consultation.”

Working Group meetings are ongoing, with, for example, a Technical Working Group session scheduled for the week. One technical director told RaceFans in Spa discussions have been “fruitful”. Another was not so diplomatic in his suggestions that many of the changes aimed at cutting costs will actually increase them, while he also felt many changes are being introduced for the wrong reasons.

He singled out the removal of tyre blankets and introduction of 18-inch wheel rims. “You get decisions like 18-inch rims which, when it all boils down, started life as aesthetics. No-one gave it any more thought, apart from aesthetics…”

On the wider subject of tyres he added: “The biggest part of the problem is you get the cars close [through the new aero regulations], then they have to attack. That attacking, and the recovering, is all down to tyres. And you’ve got the tyre supplier that I don’t believe is capable of developing tyres that can do that.

“When we had the drivers in the meeting, we asked them, ‘When was the last time that you could attack, and keep on attacking with the tyre?’” The response from one of the world champions present was ‘in 2010’. That was, of course, the final season under outgoing supplier Bridgestone.

Still, clearly an enormous of preparatory work has gone into the various regulations, with arguably the largest changes to the regulations being not aerodynamic, but to various new component categories, up to four from the previous two Listed/Unlisted Parts categories and the tyre tender.

Although renderings of swoopy cars in wind tunnels and impressive ‘following car’ wake-reduction statistics make for great headlines, the fine print on part categories will have a far greater impact. Consider, a new Article 17 running to four pages replaces the previous article, which related to Roll Structure Tests and has now been incorporated in an expanded Article 13 under the heading ‘Safety Structures and Homologation’.

Effectively the preamble to the provisions of Article 17 in draft regulations seen by RaceFans states “All components used in Formula One cars and all equipment used to support a competitor’s operations during a Championship shall be classified as a Listed Team Component (LTC), or a Standard Supply Component (SSC), or a Prescribed Design Component (PDC), or a Transferable Component (TRC).”

A full list of LTC, SSC, PDC and TRC components will be released at a later date, but clearly teams will face greater restrictions on component design than under the current regulations. These restrictions are aimed primarily at cost saving under the incoming budget cap (Financial Regulations) by reducing design time and spend on non-performance differentiators.

However, the FIA plans to have a ‘fall-back’ option for SSC and PDC components “for the event that when a tender or design process fails to produce a satisfactory result”, while the governing body also undertakes to “use its best endeavours to secure the ‘prime’ option for the classification of components”.

The regulations define Listed Team Components (LTC) as components whose design and intellectual property lies with a single competitor or its agents on an exclusive basis, and further states that the competitor [is required to] retain the exclusive right to use the LTC in F1 for as long as it competes in Formula One.

Any third party to whom manufacture of the LTC is outsourced – if not designed and manufactured in-house – may not be another team, and there are restrictions on the sharing of any data of such components.

There are, though, no restrictions on sharing of test facilities such as dynamometers or wind tunnels provided robust processes are in place, and the intellectual property involved in the operation of such shared facilities is not used or disclosed to the sharing party. Further, the results of any experiments/tests done in such facilities may not be shared outside the originator of the work.

Standard Supply Components (SSC) are defined as being those whose design and manufacture is carried out by a supplier appointed by the FIA through its tender process, supplied on an identical technical and commercial basis to each team.

A note in the draft regulations as seen by RaceFans states that the article governing “Wheel attachment and retention” – usually referred to as wheel hubs and tethers – may be re-written to makes these “standard supply” components, meaning these could be added to the list of SSCs.

The specifications for visual information panels are due to be outlined in a future appendix, but the wheel displays will essentially be wheel covers that display information, while each car will be fitted with two display panels incorporated in its bodywork.

Previous plans to impose restrictions on brake set usage are believed to have been shelved, with the supplier committing to supplying additional sets free-of-charge should usage exceed laid-down parameters, while the gearbox gear cluster tender was withdrawn, as revealed here previously.

However one technical director opined that fuel systems should be tender items given the challenges of policing them. “These really trick fuel systems, that have to be tested every time. The FIA should just say, ‘Right, there’s a fuel system, everybody runs it. Perfect, now we can police it, you’ve all got it.’”

Prescribed Design Components (PDC) are those components whose total design is specified by the FIA, but may be manufactured by another team, its agent (parent or affiliate), or an external supplier on behalf of a team or may be supplied by one team to another teams.

This is a fundamentally a new component category, albeit one that was saw limited introduction with the halo, which is effectively a PDC through being manufactured to FIA specifications. Under the new regulations front floor and rear impact structures will be PDCs, as will the skid ‘plank’ and plates, and certain fuel system components.

The final category is Transferable Components (TRC), defined as being components whose design, manufacture and intellectual property is owned by a team, but can be supplied from one team to another. They differ from SSCs or PDCs in having design freedom, and are effectively the antithesis of LTCs in that one team designs the component but is free to sell to another.

Examples are certain heat exchangers and the complete gearbox as defined, with a further stipulation being that where a team supplies another with a gearbox all ratios shall be the same across both teams. For simplification, think many of the parts currently supplied by Ferrari to Haas.

On the sustainability side, the Technical Regulations make provision for bio (or synthetic) fuels, although the exact composition still needs to be defined. Talk is of an up to 20 per cent bio-component, with suppliers needing to satisfy the FIA that they are ‘genuinely developing these compounds for use in commercial fuels’.

Further, a new appendix in the Technical Regulations demands that fuel/engine oil suppliers now agree to be bound by and be subject to the various rules and regulations of the FIA, including, saliently, ‘jurisdiction of the internal judicial and disciplinary bodies of the FIA’.

What other changes can be excepted for 2021? Intriguingly, despite all the talk of changing weekend formats, the Sporting Regulations outline very similar timetables and formats for the three practice sessions, qualifying and the race itself. No qualifying races or two-day formats, although note the regulations are subject to change before 31 October and could further be changed by unanimous decision thereafter.

Unsurprisingly the maximum number of rounds has been increased to 25, with a minimum of 10 grands prix per season. The current points structure has been retained, as has the point awarded for the fastest lap.

However, aerodynamic and computational fluid dynamic (CFD) development will be further restricted under the regulations, while a new article (9.4) relates to Power Unit Bench Testing, and restricts both power unit bench testing and complete power train tests according to complex formulae based on number of test benches, run time over 7,500rpm and operation hours.

While summer factory shutdown regulations are only marginally changed, power unit suppliers will in future be subject to the same shutdown period as teams save where local laws or unions demand otherwise, in which case the weeks may be replaced by the same number of shutdown days during which no development activities are permitted.

In summary, probably the most surprising element is that there are no real surprises in either the Sporting or Technical Regulations. However, the devil always lurks in the detail, and until the final regulations are published on 31 October there could still spring a surprise or two, particularly to the Sporting Regulations, which have seemingly received little attention save for the addition of a power unit supplier shutdown and minor tweaks.

As outlined here, the biggest post-2020 change is the inclusion of Financial Regulations in the 2021 package, and these are not expected to change much – if at all – by 31 October after all teams signed a waiver as part of their agreement to delay the statutory date to 31 October. But, again, let us see what that date brings.

Equally, the 2021 rules package features heavily revised aerodynamic regulations, which its architects believe (hope?) will finally solve the ‘following car’ conundrum. But many technical directors are sceptical whether they will provide the silver bullet the sport so desperately needs, particularly as tyres are a major contributor to the overtaking dynamic.

Do these regulations provide the quantum leap into that future that Liberty envisaged upon acquiring the sport’s commercial rights? There is no doubt that they will deliver a more sustainable sport – and thus benefit mainly the teams – but, from a sporting perspective, the answer is negative.

Given the time and thought that had gone into the overall package, they surely should provide a platform upon which to build F1’s ‘new era’. That, though, is not what fans were promised.