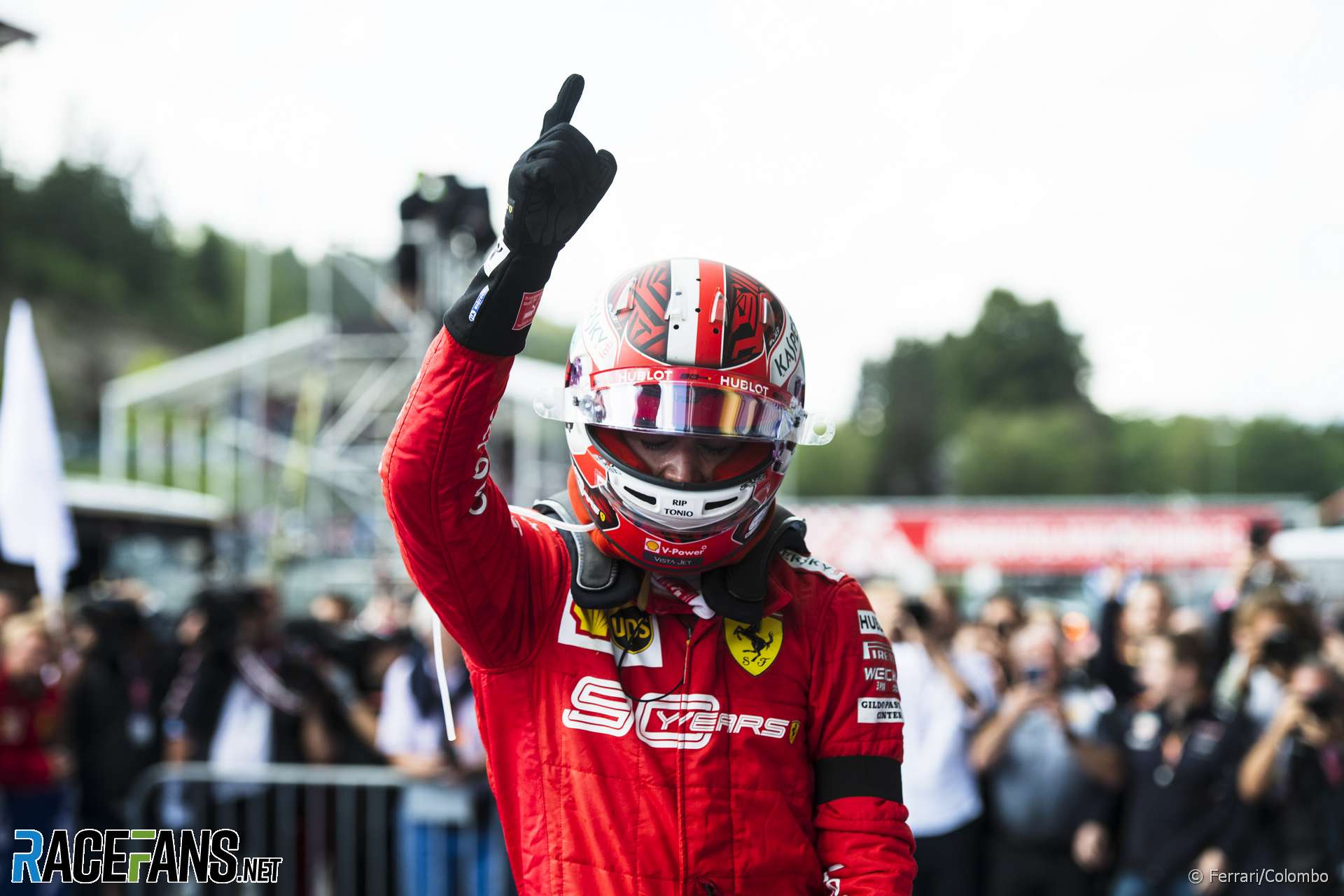 Charles Leclerc breakthrough victory in Sunday’s Belgian Grand Prix should have been an occasion of great joy. But the terrible events of the previous 24 hours made that impossible.

The entire F1 field raced with heavy hearts at Spa following the shocking crash during Saturday afternoon’s Formula 2 race which claimed the life of Anthoine Hubert. For those of them who had been closest to Hubert in his early career the pain was even more acute.

So it was fitting that Leclerc, who raced against Hubert in his first season in karts, should claim his first win, and dedicate it to his fallen friend.

The scale of the gap had been exaggerated by the circumstances of qualifying, but when the lights went out it was clear Leclerc held the whip hand. Lewis Hamilton split the Ferraris at the start but Vettel used the SF90’s blistering straight-line speed to reclaim the place – a change of positions which ultimately proved crucial for Leclerc’s victory hopes.

While Leclerc edged clear, Vettel slipped back. Hamilton stayed close, but as expected the Ferrari’s top speed was too much for the Mercedes. Their logical route of attack was to bring Hamilton in for an early pit stop. Ferrari saw this coming, however, and brought Vettel in pre-emptively.

Halfway around the next lap Mercedes told Hamilton he had to stay out – Vettel’s out-lap was too quick for him to jump ahead. Hamilton kept up his pace on his worn rubber, and even managed to chip a few tenths of a second out of Leclerc’s lead.

Leclerc, who was keeping quiet on the radio, was summoned into the pits on lap 21. Vettel had lapped quickly since rejoining the track and was clearly going to come out ahead. “Everything will be fine for the end of the race” Ferrari reassured Leclerc before he rejoined the track behind his team mate.

Within a few laps Leclerc was closing on Vettel and, sure enough, Ferrari ordered Vettel to let his team mate through. He complied, saying afterwards it had been clear from the start of the race he wasn’t going to be in contention for victory. Even so, this felt like a turning point in the relationship between the pair. It wasn’t the first time Leclerc has been quicker nor the first time he’s overtaken Vettel, but Ferrari seem to be waking up to the shifting balance of power between their drivers.

By lap 29 Hamilton was back within range of Vettel, but now he had fresher tyres. The leaders had all switched to the medium rubber, on which Mercedes had been more competitive in practice. On lap 31 Vettel ran slightly wide at the exit of Stavelot, handing Hamilton a better slipstream on the run through Blanchimont. He couldn’t make a pass stick at the chicane, but after tracking Vettel around La Source and through Eau Rouge, finally Hamilton was able to sweep around the Ferrari as they entered Les Combes, completing a well-worked pass which had begun a few kilometres earlier.

That left Hamilton 6.6 seconds behind Leclerc with a dozen laps left to run, a gap inflated slightly by his slow pit stop. With half a dozen laps to go he had only brought that down by around a second. But then Leclerc’s tyres began to fade and Hamilton hacked lumps out of his lead, the Mercedes’ downforce advantage helping it preserve its tyres for longer and take well over a second out of Leclerc through the long middle sector.

The red Ferrari rapidly grew larger in front of Hamilton. If he was hoping for a repeat of Hungary, Leclerc was fearing a repeat of Austria. But neither situation unfolded.

They crossed the start/finish line for the penultimate time separated by one-and-a-half seconds, and with lapped cars close in front of them. In the middle of the lap Antonio Giovinazzi’s Alfa Romeo spun into the barrier at Pouhon, and the leaders had to ease off for yellow flags. As they emerged from Stavelot for the final time, Leclerc was just far enough ahead not to worry about a late lunge from Hamilton. The overdue first victory was his.

Red Bull never figured in the battle at the front. Max Verstappen fluffed his start and lost several places by the first corner. As he turned in, Kimi Raikkonen decided to hug the inside line as well and the pair tangled, the Alfa Romeo briefly looking as though it would flip over. He landed the right way up and continued, but Verstappen arrived at Eau Rouge with a broken track rod and thumped into the barrier.

Fifth place was unexpectedly taken by Verstappen’s new team mate Alexander Albon, who had run outside the top 10 for much of the first three-quarters of the race. His afternoon came alive once he switched to the soft tyres, which helped him to make rapid gains through the midfield.

He followed his former team mate Daniil Kvyat past several cars, then demoted the Toro Rosso driver. Albon then performed a smart move on Sergio Perez. The pair dawdled as they approached the DRS line, each hoping to be last across in order to trigger it, a contest which Albon won. He then put two wheels on the grass as he dived down the inside of the Racing Point driver.

Albon inherited fifth after Lando Norris’s McLaren came to a stop at the start/finish line. It was a cruel outcome for a driver who’d been on course for his best F1 result so far. It came on a doubly frustrating day for McLaren as Carlos Sainz Jnr’s car failed him early on.

Pierre Gasly finished ninth on his return to Toro Rosso after being told to let Kvyat through and being passed by Nico Hulkenberg. The pair gained a place each from Antonio Giovinazzi who crashed out at Pouhon with a lap to go. That handed the final point to Lance Stroll.

The Haas pair finished out of the points, having slipped back from their qualifying positions with the usual tyre problems. Romain Grosjean felt his car’s pace was fundamentally good but got stuck behind Daniel Ricciardo, who was running off the pace after Stroll mauled his car on lap one. He followed the black and gold cars home, and admitted afterwards he’d been reluctant to race at all under the circumstances.

Leclerc’s first of many

Leclerc’s career to date has been a tale of triumph despite tragedy. His godfather Jules Bianchi suffered fatal injuries in a 2014 F1 crash, while Leclerc was beginning his successful climb through the lower categories.

In 2017 Leclerc lost his father while he was on the way to the Formula 2 title. His crushing performance in the round which followed Herve Leclerc’s death had much in common with his maiden grand prix victory.

This 21-year-old has demonstrated not only remarkable talent, but incredible inner strength to prevail through adversity. In that respect, he almost seems to belong to another era, when motor sport tragedies were not the exception they are today.

Sunday was a sad day for the sport. The only positive thing that can be said about it is that these days are fewer and further between than they once were.

But Leclerc’s successes are surely about to become a much more common sight.