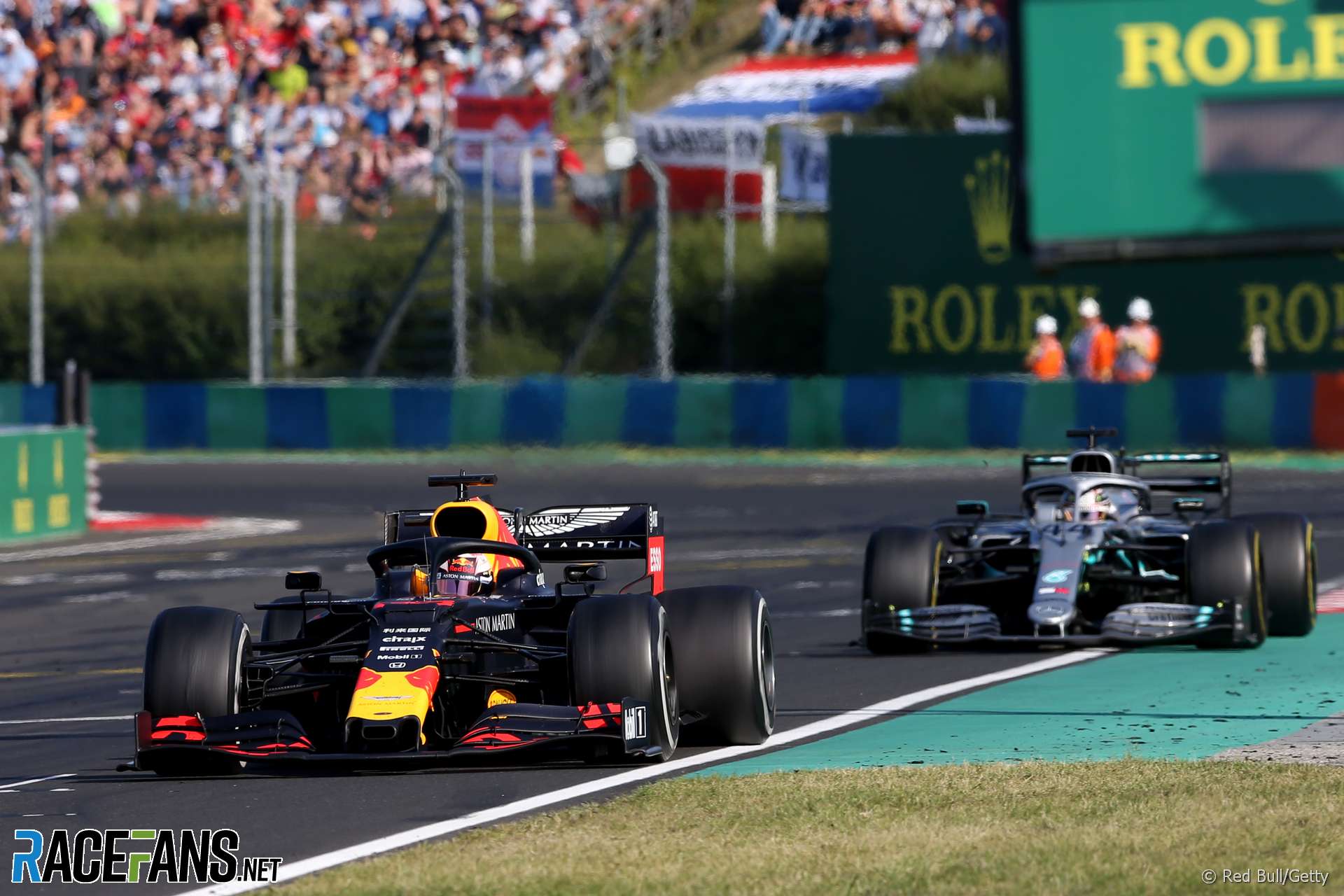 Max Verstappen took a swipe at Lewis Hamilton ahead of the Hungarian Grand Prix weekend, telling the world the five-times champion had “never really had big pressure from his team mates”.

That statement was true of both drivers in Sunday’s Hungarian Grand Prix. Only one Red Bull and one Mercedes were in contention for victory at the Hungaroring, but even with the Ferrari pair also out of the equation, that was more than enough for a scintillating battle.

Valtteri Bottas arrived at the Hungaroring having squandered a chance to slash Hamilton’s championship lead the previous weekend, leaving him 41 points adrift of his rival. The rumours around Mercedes indicated this was his last chance to prove Mercedes should keep their faith in him and not Esteban Ocon for 2020.

Beating Hamilton to second on the grid behind Verstappen was a good start, but he undid his hard work before they even reached turn four. Trying to get around the outside of Verstappen at turn one he locked up, flat-spotting a tyre, which caused him to run wide at turn two.

There he made sure to give Hamilton space – perhaps too much space, he later admitted – and his team mate swept by. Compromised, Bottas then found Charles Leclerc sweeping past on his right. The two came together, breaking Bottas’s front wing. Five laps later he was in the pits for repairs, his hopes of a decent points haul over.

Bottas’s demise evened things up at the front a bit. Pierre Gasly’s poor qualifying effort – he was eight-tenths of a second off Verstappen – meant he started sixth. He was therefore unlikely to play a role in the fight at the front to begin with, and when his medium-tyred Red Bull was passed by three soft-tyres rivals at the start, he was on course for a day every bit as demoralising as Bottas’s.

Leclerc kept Sebastian Vettel behind at the start but as early as lap 10 the pair were over 10 seconds behind race leader Verstappen. The stage was set for a 70-lap fight between the sport’s most successful current driver and the man most widely tipped to succeed him.

By lap 17 it was becoming clear the leaders would be able to make their pit stops and come out in front of the Ferrari drivers if they timed things correctly. But Verstappen and Hamilton were leaving the field behind at such a rate they were already lapping the stragglers, who now also became a factor in the timing of their pit stops.

Hamilton’s pace made him an obvious threat. he was almost, but not quite, quick enough to get within range of Verstappen’s DRS. The first lap on fresh tyres offered a significant ‘undercut’ advantage, and Red Bull were the ones to grab it.

It was a risky call – Verstappen emerged from the pits with Antonio Giovinazzi ahead of him, but the Alfa Romeo driver swiftly made way. Eyeing Verstappen’s sector times, Mercedes quickly realised that bringing Hamilton in would only guarantee he’d fall behind the Red Bull again. The best option was to extend the stint.

Hamilton came in six laps after Verstappen, giving him the benefit of slightly fresher tyres. He lost over a second due to a slow pit stop, but gained that and more back as he reeled off a series of hot laps when he rejoined the track. Hamilton ripped two seconds a lap out of Verstappen; the Red Bull driver was told to turn his power unit up and found another nine-tenths.

But as the pair continued to pick their way through traffic, Verstappen’s compromised line through the final corner gave Hamilton a chance to test the Red Bull driver’s famously uncompromising defences. Verstappen covered the inside at turn one as they lapped Daniel Ricciardo. Hamilton kept pressing, forcing Verstappen to cover the inside at the next two corners.

He gave it a go at turn four as well, but the short, fast and slightly blind curve is one of the hardest places to effect a pass. Hamilton ran wide onto the asphalt apron and Verstappen held his lead.

The sustained attack had taken its toll on Hamilton’s brakes, and for several laps he had to back off and give them a breather. By lap 43 he was back on the cusp of getting within range of Verstappen’s DRS zone. But if he hadn’t been able to pass the Red Bull when his tyres were at their peak, his chance now seemed slimmer.

Mercedes therefore decided to bring Hamilton in for a pit stop. Afterwards Christian Horner described this as an “obvious” move, whereas Mercedes characterised it as a risk which involved switching to a two-stop strategy which they had rejected in their pre-race briefing.

Undoubtedly a two-stop strategy was an inferior option in a ‘normal’ race where more than one car was within the leader’s pit stop window. Pirelli’s pre-race guide indicated one-stopping was the only realistic strategy.

But Hamilton’s circumstances were different from the norm: he would not lose a single place by pitting, and therefore the risk was far less. Hamilton called the move a “big gamble” but the stakes were actually low. Mercedes were not risking a low points finish in pursuit of a higher one.

As it turned out, there was a chance Hamilton could have passed Verstappen without the extra pit stop. His tyres were six laps fresher than Verstappen’s, and the Red Bull driver’ rubber hit ‘the cliff’ with seven laps to go. The real importance of switching Hamilton’s strategy was it meant Verstappen could not afford to nurse his rubber to the end. Hamilton was 19.2 seconds behind him at the end of lap 49, and Verstappen had to keep Hamilton’s gain at less than one second per lap.

It was ‘Hammertime’ for Hamilton, but to begin with a clutch of lapped cars compromised his charge. He gained less than four seconds over the first six laps. Verstappen seemed on course for his third win in for races.

The picture changed quickly over the next 10 laps. First Hamilton, free of traffic, started to bury his laps well into the mid-1’18s. Still Verstappen was in the high 1’19s, which was just good enough. Then his tyres hit the cliff. On lap 63 Hamilton took 2.3 seconds out of him, and he continued at the same rate.

This time there was no wheel-to-wheel dice: Hamilton was so much faster he simply cruised up behind the Red Bull, pressed his DRS button and motored past for his eighth win of the season. Verstappen played his final card, pitted for a set of soft tyres, and nabbed the bonus point for fastest lap.

After Hamilton took the chequered flag there was a one-minute wait for the Ferraris to appear. They were led by Vettel, who had run a patient opening stint then switched to the soft tyres to reel in Leclerc.

As Vettel closed, Leclerc was advised that, unlike in Australia where the roles were reversed, the Ferrari drivers were “free to race”. Vettel surprised his team mate with a lunge down the inside of turn one for the final podium place, after which Leclerc reported his ‘K1 plus’ power mode had not worked.

A quick Red Bull pit stop for Gasly and a slow McLaren one for Lando Norris accounted for some of the position changes in the second half of the top 10. Carlos Sainz Jnr impressively delivered another fifth place finish for the Woking outfit, leading home Gasly. Red Bull must look at Sainz point’s tally, just five shy of Gasly with a much slower car, and wonder how they let him slip through their fingers.

Mercedes also have some thinking to do about their driver line-up. After a strong start to his third season at the campaign, Bottas delivered his second weak performance in a row at the worst possible time. He followed Kimi Raikkonen home.

Sergio Perez and Daniil Kvyat fell off the same cliff as Verstappen and the beneficiary was Alexander Albon. He claimed tenth place behind Norris, and ironically may have benefited from being passed by his team mate earlier on and ending up on a superior strategy as a result.

Neither Renault driver scored: Nico Hulkenberg toiled away with an engine problem which confined him to 12th behind Perez. Daniel Ricciardo spent virtually the whole race stuck behind Kevin Magnussen, infuriated by the Haas driver’s late defensive moves. For Magnussen’s part, his engineer told him that was the best drive for 13th place he’d seen.

Williams seemed to make a step in Hungary. At least, George Russell, who followed up his unexpected 16th in qualifying with the same in the race. In his hands, the FW42 looked like a car which belonged in the midfield rather than merely aspiring to it. He was followed home by Lance Stroll, Antonio Giovinazzi (who had some unspecified problem with his first set of tyres) and Robert Kubica, whose thousands of passionate supporters were not deterred one iota by the largely dire return he is enduring at Williams.

While another Hamilton championship now seems a foregone conclusion, the emergence of Verstappen and Red Bull as serious contenders for race victory has injected fresh life into the 2019 season.

We’ve had occasional skirmishes between Hamilton and Verstappen before, but he Hungarian Grand Prix served up the first prolonged encounter between the two. And what a treat it was.

“It’s really fantastic to see Red Bull’s progress,” said the race winner, who hopes the next round will see more than just two cars fighting for the victory.

“I think it’s going to continue for the races to come. Even the faster circuits, the engine’s going to be great in Monza, so hopefully we’ll see this battle continue for the rest of the season. And, fingers crossed, Ferrari also will take a step back towards us at some point over the next races. But going into the break, this is awesome.”