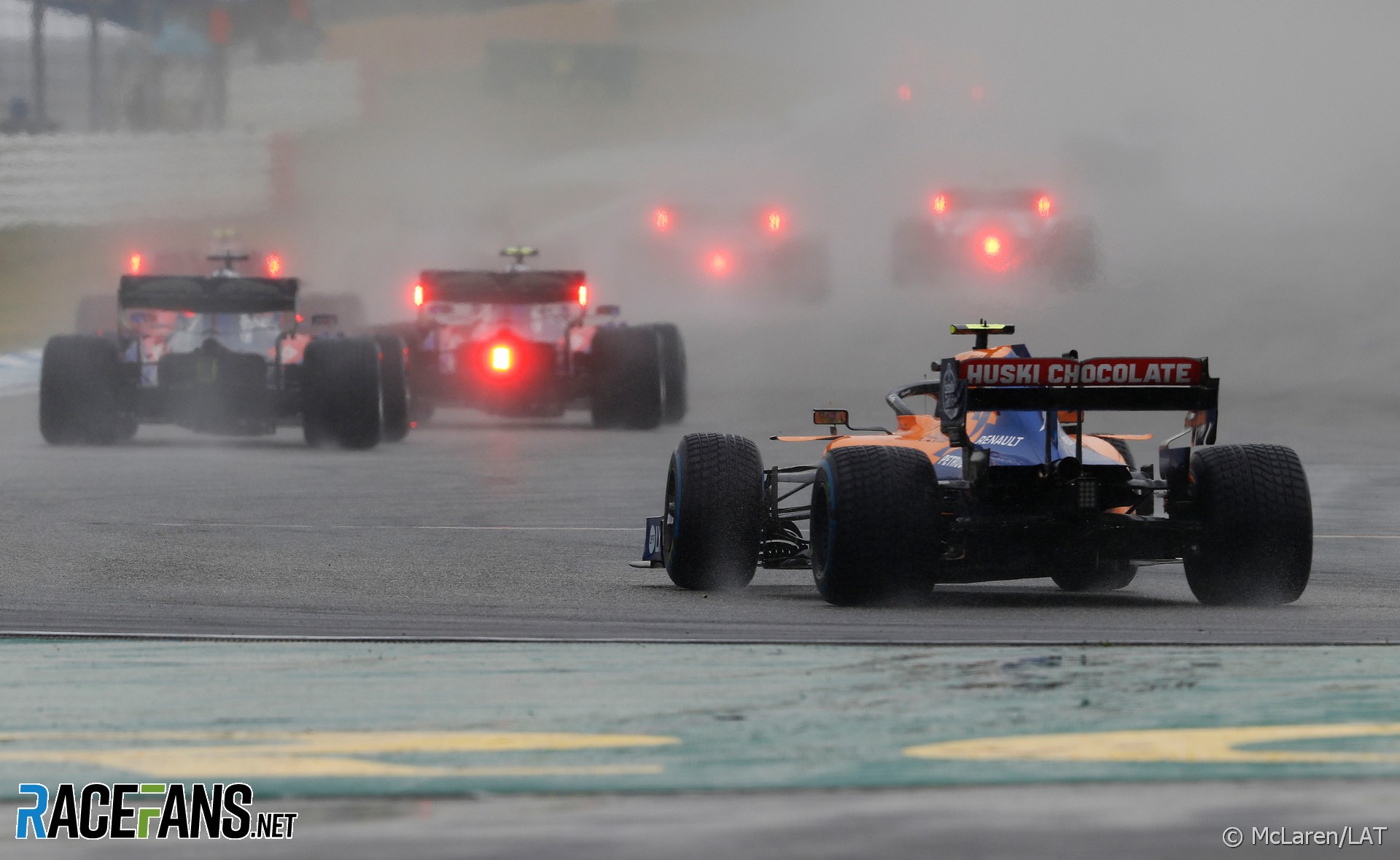 In the round-up: Lando Norris revealed he nearly crashed on his pre-race reconnaissance lap in Hockenheim.

Norris ran onto the treacherous drag strip where several drivers spun or crashed during the race.

The only thing that was stupid which led to a lot of the crashes was the drag strip. I, luckily, did it on my laps to the grid.

We had an onboard that we had to watch, that one magic lap from Fernando [Alonso] when he was with Ferrari. And he goes two wheels over the kerb onto the drag strip and everything looks fine.

So I did my lap-to-grid, I tried it, and I genuinely thought I was going to be out of the race before it had even started. I put the clutch in, full opposite lock, I’m not exaggerating, I shat myself. I was like ‘oh shoot, this is not going to be good’. Because all the guys were waiting there to put me up on the jacks in my position, and I had the biggest fright of my life.

So from my side I knew that straight away, obviously I’m not going to tell anyone because I’ll let them try it out. But every person that made a small mistake, just lost the rear or under-steered a bit into the last two corners, went onto the drag strip and you just see the fricking… it’s like you accelerate, nothing you can do.

It’s probably quite dangerous to be honest because you don’t slow down on the Tarmac run-off there. Approaching at a decent speed, as soon as you hit it you can’t do anything. There’s no point braking, even. That’s something I think needs to be changed for next time.

Here's how @GeorgeRussell63 missed out on his first @F1 point on Sunday – he went off at turn two on lap 51, which allowed Robert Kubica through.#F1 #GermanGP pic.twitter.com/bZTTXqnf9p

Right now in Brackley 🌧👀 Think it looks like time for Softs… 😅 pic.twitter.com/JlTzwrE5so

Did Bottas's crash out of the race spare him the humiliation of finishing the race stuck behind Stroll? It sure didn't look like he was about to get by… #F1 #GermanGP pic.twitter.com/oRAbeSC1nd

🗨️ @LewisHamilton on whether the @netflix cameras were a distraction during last weekend's #GermanGP. #F1 pic.twitter.com/aWBQKTa86x

"Sauber Motorsport AG, which operates and manages the Alfa Romeo Racing team in the Formula One World Championship, have appointed Alessandro Cinelli to the position of head of aerodynamics, where he will succeed new Technical Director, Jan Monchaux."

With speed in hand, Hunter-Reay happy with Mid-Ohio podium (IndyCar)

"I don’t know what (Newgarden) was thinking. He just went for a pass on the outside and tried to do the over-under, but the line there as you come back, you do a diamond and he just stuck his nose in there. I don’t know."

"To have what typically is a circuit that you can't pass (on), and to have the action that we had today is unbelievable, with what Firestone do, what IndyCar do, the split in strategies, for me even being in the car, it was full-on. Even with lapped traffic and you're trying to pass them."

"The Swiss driver has missed the last two rounds, with Ryan Tveter and Dorian Boccolacci taking his place in the team."

"The 18-year-old previously featured for the Swiss team in F3 in Austria, finishing 28th and 21st, in his first ever taste of the category. He will now return alongside teammates Yuki Tsunoda and Andreas Estner for one round."

Murray Walker: I wouldn't be here if social media existed in my time (Motorsport magazine)

"I would not be sitting here if social media had existed in my time because they would have had my guts for garters."

"There is demand for (electric vehices). We are all members of this blue planet. I personally think the Paris Climate Agreement was perhaps the biggest accomplishment of mankind for a long time. That’s relevant. We have a responsibility to reduce CO2 independent of regulation."

"It was rather frustrating to see the race start behind the Safety Car. The latest regulations allow for the cars to trundle round as the best way to disperse water before thankfully lining up and performing a normal start with a suitably reduced number of race laps."

Is this how F1 should sustain races on heritage tracks which cannot afford high hosting feed?

A better business model would be F1 pays the track to host the event, which covers the costs. Then all ticket receipts go back to F1. It safeguards tracks and also forces F1 to make its sport as exciting as possible to sell tickets.
Steven Robertson (@Emu55)

Happy birthday to Egc and Osvaldas31!