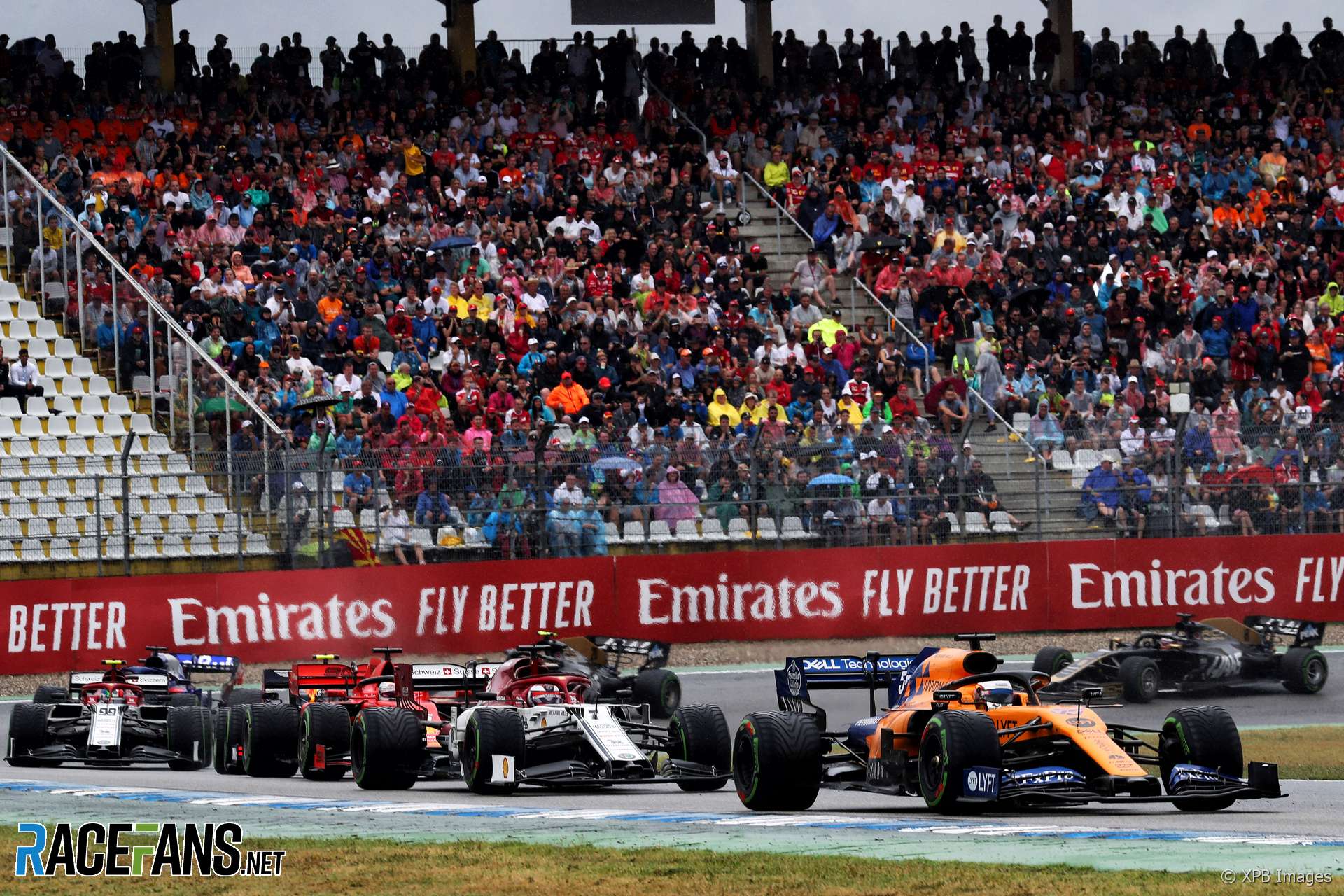 Carlos Sainz Jnr said missing out on a potential podium finish felt “bitter” but he believes McLaren made the correct strategy calls during the German Grand Prix.

Sainz ran as high as fourth during the race but could have finished on the podium had he not fallen behind Lance Stroll and Daniil Kvyat after their early switches to slick tyres during the penultimate Safety Car period.

“Every decision that we took probably was the right one,” said Sainz. “In the end we missed out on a podium because of two cars that had nothing to lose and pitted for a slick and benefitted from that.”

The McLaren driver said he wanted to put slick tyres on as the track dried out but understood why the team was unwilling to risk the position he was running in.

“I was [fifth], I asked to pit actually. It was just when you don’t see the Mercedes, the Red Bull and the Ferrari pitting you say ‘we are [fifth], we are crazy if we pit now’. And we missed this.

“We were very close to pitting and that would have given us a podium today. In the end it was a wise thing to [not] do but unfortunately the others profited from a risky decision.”

Sainz spun off early in the race but was able to recover several of the places he lost by being one of few drivers not to put slicks on during the middle of the race.

“I was not very comfortable in the conditions,” he said. “We were running a smaller rear wing than all of our direct competitors and we were struggling to warm up the tyres initially.

“Then more or less once you got into a rhythm it was fine, it was just the restarts with a smaller rear wing compared to our rivals, it was just a bit more tricky.”

“That spin cost me,” he added, “but in the end we were one of the only cars not to pit for slicks halfway through the race as it started raining. It was I think a very good call, a nice call.”

Most drivers pitted for slicks just before half-distance in the race, but Sainz said he felt the track was not dry enough. “I [led] the decision of not pitting for slicks,” he said, “that was my personal decision.

“I said it was too wet and I could see rain in my visor so it was not worth at all pitting. And it gave us back a lot of track position.”

However he was prepared to accept the team’s decision not to make an early pit stop for slicks later in the race. “I did say ‘let’s go on a slick’ but at the same time it was too risky. So I perfectly understand that we didn’t pit because no one did, actually, out of the top five cars.

“I had the feeling it was the right thing but it was at the same time very risky so I back the team fully on that. It’s just when you see Kvyat celebrating a podium and Stroll in front of you when they were really far behind, it just feels very bitter right now.

“But at the same time I don’t think we could have done nothing differently. We just did everything perfectly and the guys who had nothing to lose just took a risky decision that came out to be the right one.”

9 comments on “McLaren right not to gamble on slicks – Sainz”