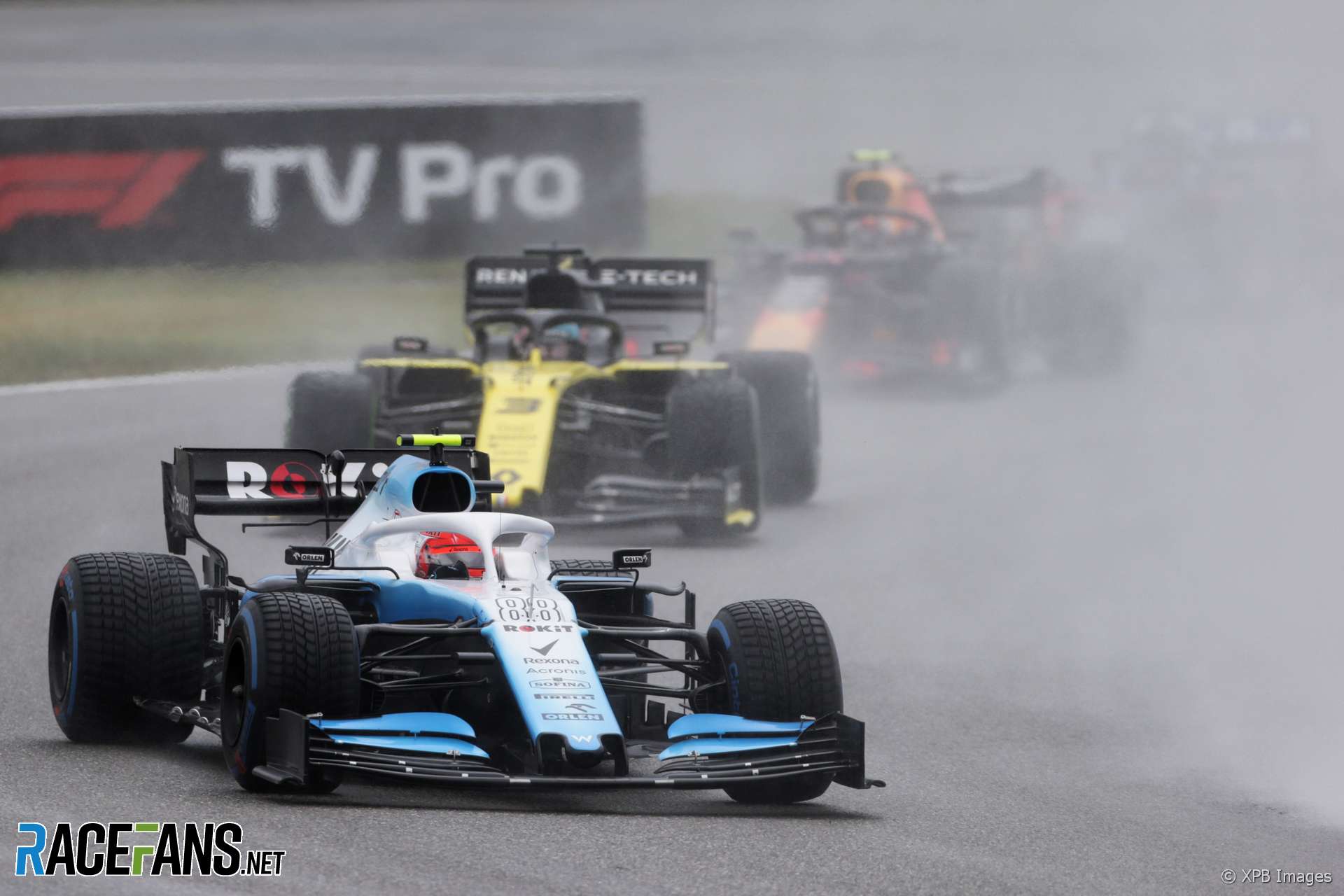 Robert Kubica has scored the first point since his return to Formula 1 after both Alfa Romeos were given 30-second penalties in the German Grand Prix.

The Williams driver has moved up to 10th place in the classification. Lewis Hamilton has also gained two points by inheriting ninth as a result of the penalties. He therefore increases his championship lead to 41 points.

Romain Grosjean is promoted to seventh place ahead of team mate Kevin Magnussen.

The stewards ruled that the torque delivered by both cars at the start of the race did not match the torque demand requested by the drivers’ input within the required time of 0.07s. Giovinazzi’s delay was measured at 0.3s, Raikkonen’s at 0.2s.

The stewards ruled this violated the sporting regulations requirement for drivers to “drive the car alone and unaided.”

“In order to guide the teams as to how they can conform to this regulation, the FIA’s Formula One department has published to the teams a document specifying how each of the various systems that could aid a driver would be regulated,” they explained.

“The stewards considered that this document has the same effect as a technical directive as affirmed by the International Court of Appeal. The clutch is controlled electronically via the common ECU. However, the teams have the option to tune some of the controlling parameters.

“In order to prevent the teams from using this tuning to affect the way in which the clutch engages at the start of the race in a way that could potentially mimic traction control or other advantageous schemes, the FIA requires that the torque in the clutch matches (within specified limits) the torque demand as the driver releases the clutch. This must occur within 70 milliseconds.

“In the case of both cars of Alfa Romeo Racing, the time that it took for the torque to align with the torque demand was close to 200 milliseconds and 300 milliseconds respectively. This provided a more gradual application of the torque, which given the wet conditions was a potential advantage. Regardless of whether there was an actual advantage, the Stewards determined that this was a clear breach of the guidance given to the teams as to how this would be adjudicated.

“The stewards held a hearing and reviewed the data, with three members of the team present, including the engineers concerned, along with the FIA Technical Delegate and his assistants responsible for these checks. The team accepted that they were not within the required limits. The stewards accepted the team’s explanation that the cause of this was that they were caught out by the unusual weather conditions and the fact that they did not do any practice starts under these climatic conditions and set the parameters in a way that failed to meet the requirements.

“However, the stewards noted that the FIA technical delegates check this parameter on all cars, and that no other irregularities were found. The obligation to meet the requirements is irrespective of the climatic conditions. Therefore, the stewards considered that a breach of Article 27.1 occurred.”

Raikkonen and Giovinazzi were penalised as if they had performed false starts. “The stewards order a 10-second stop-and-go time penalty, which as this was applied after the race will be converted to a 30 second time penalty,” the stewards noted.