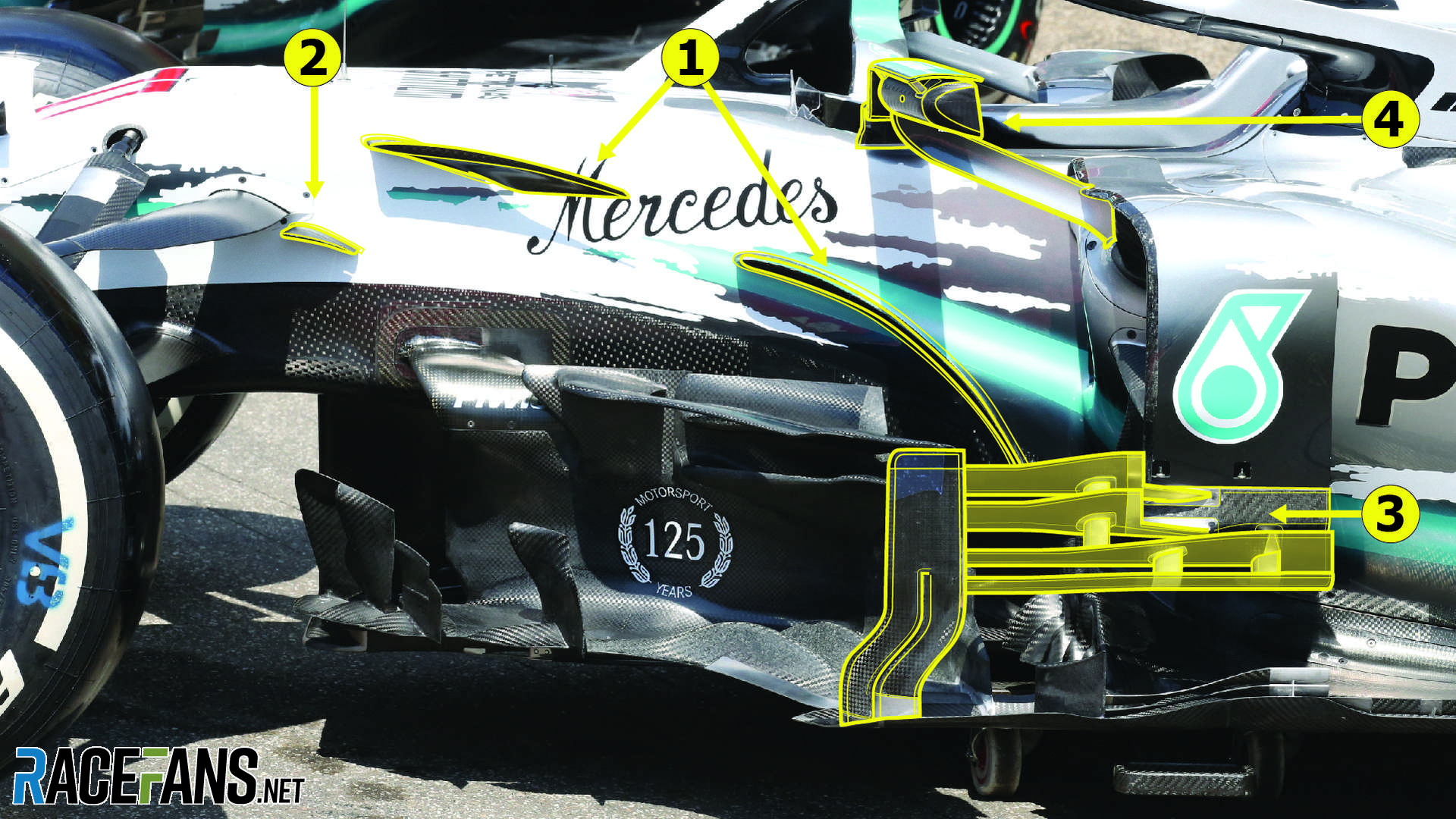 Mercedes’ dominant W10 has a striking new retro livery this weekend. But besides the aesthetic changes the team has brought some significant new performance updates to the standard-setting FD1 car of 2019.

The major visible changes are to the sidepods, sidepod fins and mirrors, plus several other smaller detail aero updates apparent on the car. Valtteri Bottas has already confirmed some of the changes are for cooling and the rest are just a general aero upgrade.

It’s been apparent all season that the W10 is tight on cooling in high ambient temperatures. How far this update has gone to rectify this should become apparent through the heatwave currently affecting the European summer.

While the front of the sidepods and the down-swept area over the radiators appear unchanged, revisions are apparent in the area over the engine’s exhausts and the outlet section formed at the tail of the coke bottle area. In comparison to other hot races, the exit is much wider. While this will aid cooling the pay-off is more drag, slowing the car on the straights. The obvious external changes to the sidepods does not necessarily meant that the radiators contained within have been altered.

Around the front of the sidepods a lot of details have been changed. Along the side of the chassis the downwash fins (1) have been completely changed, the main pair are now larger and steeper. This will help direct airflow into the sidepod undercut.

These are important as the Mercedes undercut is smaller than its rivals’, as it does not have the high sidepod inlet intake. Meanwhile an additional fin (2) has been added behind the lower wishbone, to further aid the downwash effect over the bargeboard area.

A bigger change is the sidepod vane set up, which now features Haas-style aerofoil sections. Typically, the vanes around the sidepods are used to keep the front tyre wake away from the sidepods, allowing a cleaner airflow over the sidepod. Haas soon picked up on the fact that the airflow in this area is being turned outwards by the bargeboards and sidepod fronts.

These aerofoil vanes catch that sideways airflow and create a little downforce in the process, while still performing the primary function of front tyre wake management. Mercedes have followed the Haas route with two shorter upper aerofoils and two longer aerofoils below them (3), necessitating detail changes to the other vanes they attach to.

Mercedes tested pod and vane style mirrors earlier in the season but never raced them. They are now part of the German GP update (4), their design copying most other teams’ with a mirror surrounded by a vane used to direct airflow over the sidepod.

A further small detail is the front wing endplate, that gains an angled fin on the footplate section, copied from the Ferrari.

At the back of the car, the rear wing sports a new complex endplate. Two particular features are new, the cut out behind the flap and the strakes up the side of the plate. While other teams have various design of the strake, the stepped cut out area is unique.

While Ferrari have led the way at the Hockenheimring, the varying temperatures may be complicating Mercedes’ efforts to understand the implications of its latest upgrade. The team made changes to Lewis Hamilton’s sidepod configuration during final practice, where they were unusually out-paced by both Ferrari and Red Bull.

However it would be most uncharacteristic of this team to have taken a wrong turn with its car development. Nonetheless, given their near-perfect first half of the season, this may be the last major update to the car, with just race-specific updates required for the rest of the year at ‘outlier’ tracks such as Monza.