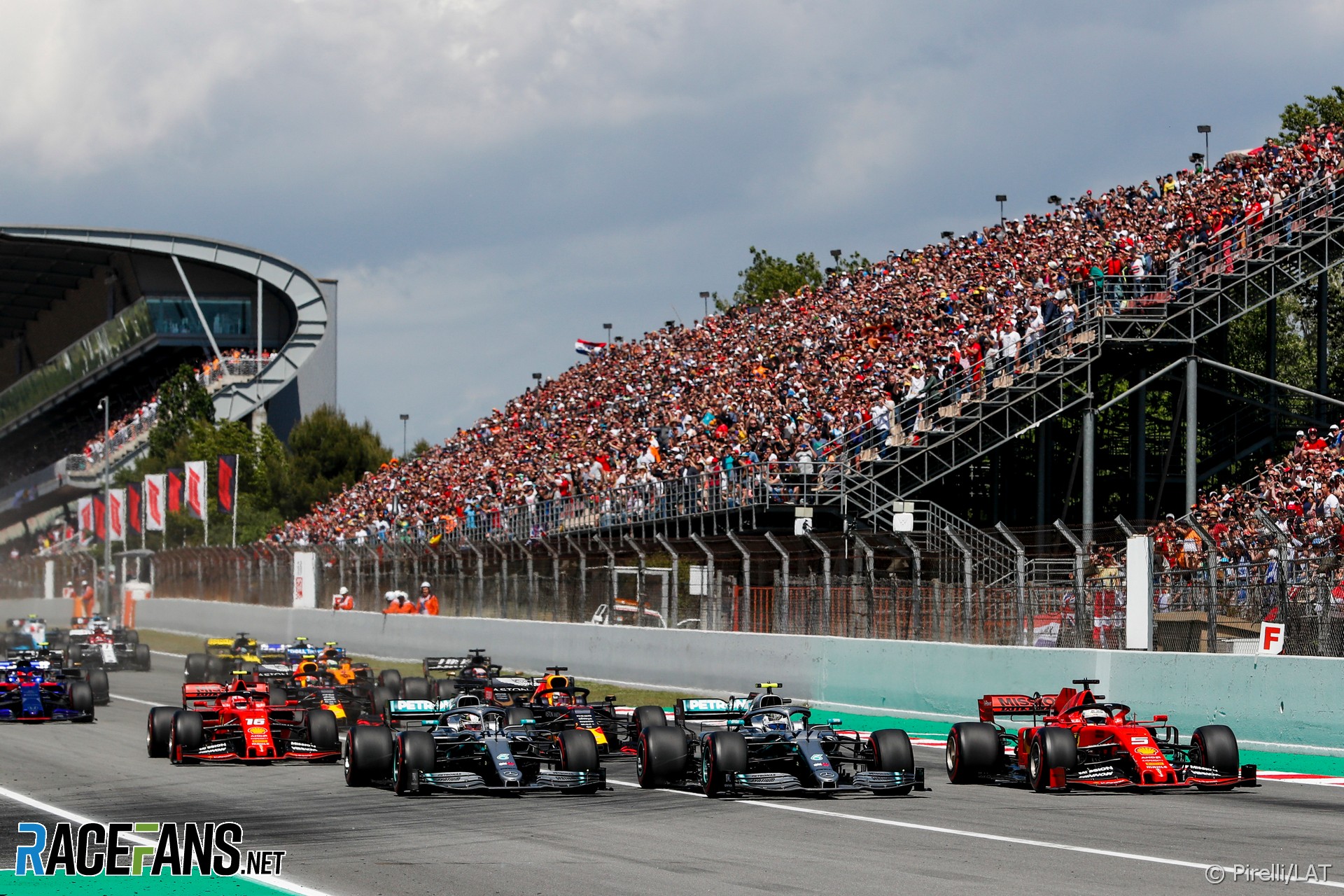 The Motorsport Industries Association, which represents the commercial interests of all facets of the industry and is the only body of its type, traditionally hosts its annual Business Growth Conference on the Thursday prior to the British Grand Prix.

This year, as per previous years, the venue was a marquee erected on the premises of Racing Point (formerly Force India) opposite Silverstone’s main gate, and thus easily accessible to those with Formula 1 business interests.

Since Formula 1’s commercial rights holder announced that the sport planned to introduce a number of tender, specification and prescription parts and further control spend via cost caps as from 2021, jitters have been felt throughout the industry – and particularly within the United Kingdom, where eight of the 10 current teams operate bases ranging from wind tunnel installations and model shops to fully-fledged factories.

Where teams currently design and manufacture – or sub-contract the processes – virtually every chassis and drive-line component bar wheel rims, friction items and fuel tanks, under the proposed regulations an increasing number of components will be manufactured to specification. As outlined previously, out goes the current ‘listed parts’ terminology, to be replaced by:

The implications for the F1 components industry are obviously huge. For rather than, say, 10 widgets being designed and manufactured by as many suppliers, the part could be subject to ‘one-design-fits-all’ regulations (SSC/SDC), meaning a single supplier will obtain the order and leave the others out in the cold. Intra-team supply (TRC) will also hit the supplier industry to some degree.

True, suppliers could tender for one or other component, but many are one-man businesses that are geared up to supply a two-car team rather than the entire grid. However it is sliced, the 2021 regulations will impact on the industry, and thus MIA members.

Thus it fell to Pat Symonds, F1’s chief technical officer and an engineer who lead teams which won multiple championships with the likes of Michael Schumacher and Fernando Alonso, to allay the industry’s credible fears and explain the rationale behind the changes to MIA members.

Symonds opened his address by reminding listeners that the ultimate regulator of the sport is the FIA, with Formula One – formerly known as Formula One Management/Administration depending upon the exact activity – providing input to the governing body. Of course, Formula One has every interest in ensuring that the product delivers a world-class spectacle (and thus profits), but the final decision lies with the FIA.

“I want to explain for those who sometimes get confused exactly what the role of the FIA and Formula One is. The FIA is the regulator of Formula 1, and Formula One, which used to be known as Formula One Management, is the promoter and commercial rights holder,” he said. For the purposes of this column, ‘Formula One’, a subsidiary of (listed) Liberty Media, is the promoter, and ‘Formula 1’ (or F1) is the sport itself.

“In the past this has been a very distinct difference,” Symonds continued. “There is more integration now, and all of what I’m going to talk to you about is what we’re doing within Formula One to try and help the FIA to produce regulations that will enhance the product for us. But ultimately it is only the FIA who can produce those regulations. They can listen to us, they can work with us, but it’s the FIA who’s responsible for those regulations.”

Recapping the recent history which brought us to this point, Symonds discussed how the now-defunct Formula One Teams Association, formed back in 2008 as the global economic crisis bit, paved the way for some of the current thinking in the sport. True, FOTA also had as its objective a revised Concorde Agreement and change of governance process, but the fact is that, as Symonds pointed out, the teams’ association “introduced a number of voluntary measures to Formula 1 to reduce costs and ensure the economic stability of the sport.”

“These measures included a huge reduction in in-season testing, limits on the number of people who went to races and, perhaps the most effective of all, a limitation on the amount of aerodynamic research that was done, both in wind tunnels and in Computational Fluid Dynamics, which of course then led to less parts being produced, and at less cost to the teams in total.”

The ultimate outcome, said Symonds, was that F1 hadn’t ‘wasted’ that crisis, but had protected the business by taking appropriate action in a timely manner. “Like many other businesses that went through the recession [F1] came out the other side leaner, more efficient and actually stronger than ever.”

Now 10 years on, the sport faces further challenges. “Formula 1 teams have grown beyond all recognition, and advertising budgets and sponsorship have found many new outlets, which have really hurt our sport.

“We’re not alone in having to react to this very different [connected] world, and in Formula 1 I think we are now recognising this. The previous owner of Formula 1 probably didn’t, probably wasn’t interested in it, but since Liberty Media took over as the commercial rights holder it’s very much on the horizon.”

The commercial picture is, explained Symonds, totally different: “Don’t get me wrong, it’s nowhere near as dire as it was 10 years ago, but the main difference now is that we have three, maybe even two teams who are achieving success through prolific spending.

“The other teams are finding the competition for sponsorship extremely difficult because of all the new media that’s available to those advertising budgets. And this come at a time when the regulations mean that incremental improvements, those marginal gains, are the ones that bring success, and they are expensive.

“On top of that, we’ve even got the bigger teams, or their owners and boards of the owners, questioning why Formula One, for all the benefits that it brings to them, actually needs to cost so much.”

Then a crucial point, for Symonds references reduced revenues from the sport: “At the same time the sponsorship income is diminishing for the mid-grid teams, so too is their other source of income, and that is the income from us, the commercial rights holder.”

This was due to, said Symonds, race promoter deals that were renegotiated out of necessity, in turn forcing expanded calendars to make up for lost revenues. But, of course, more races cost the teams more money…

However, according to Symonds, such expansion also creates new markets for feeder categories in countries such as China, which Liberty plans to develop into an important market, with trickle-down effects for motorsport suppliers. Liberty intends to assist promoters in creating national feeder series.

Thus, Formula One (the company) embarked on a multi-faceted programme, with the top priority being entertainment as per the mission statement: “To unleash the greatest racing spectacle on the planet. Formula 1 should be the world’s leading global sports competition, married to state-of-the-art technology, to excite engagement with all fans of all ages, and iconic live events and live celebrations across the world.”

However, Symonds recognises that F1’s supplier base is concerned that Liberty’s initiatives are an impediment to growth, that cost caps will result in reduced income and that standard parts will erode business.

He does not believe that will happen, but challenged his audience to: “Look me in the eye and tell me that you believe that without any intervention Formula One will flourish in the future. Because I believe it won’t.”

As revealed here previously, cost caps have been set at $175m (£140m/€150m), excluding marketing, driver salaries, travel and certain staff costs. This base figure was, Symonds said, substantially higher than the total budget for Williams of three years ago, when he was technical director and the team regularly placed in the top five in constructors’ championships.

Thus, he said, there was still plenty of money to be earned provided suppliers won tenders and diversified where possible.

Equally, he told the audience, standard parts were “a necessity to achieve financial stability for teams, even with the budget cap.

“While we have a sport where marginal gains exist, and no matter how marginal those gains are, and prolific spend will bring performance to the big teams that is not available to the teams on the lower budget.”

Formula One (the company) had not, Symonds stressed, taken the question of single-source supply lightly. “We understand the dangers to the sport and to the supply chain, but many of you will know that my colleagues and I spend a considerable amount of time engaging with you and engaging with teams before considering single-supply.

“This in itself is novel; I don’t think either the regulator or the commercial rights holder has ever engaged with the supply chain in this way before.”

There is scope for multiple suppliers to offer some components, Symonds explained. “For example on the 2021 car the whole axle assembly, wheel nut assembly et cetera, is FIA-designed and multiple-sourced. The teams can make it, suppliers can make it, and there are plenty of areas like where we will be doing it.”

In fact, he pointed out, multiple suppliers had already been appointed for current items such as side impact structures, as well as halos.

But once a cost cap is introduced, does that not free F1 up to get rid of all the rules and allow much greater innovation? Symonds fears the danger is that “someone gets it right, everyone’s spent their budget and you’ve got a dominant team with no one able to catch up. So we firmly believe that even with a budget cap there still needs to be some regulations beneath it.”

“I don’t think you will ever take innovation away in Formula One,” he added. “We’ve got a huge number of very, very clever engineers who are always looking for things. [Though] maybe it is more marginal gains these days.”

New ideas and concepts would not be excluded either: “It would take probably an application to the FIA and say, ‘Look, we want to do this.’ I think in low-carbon fuels we’re going to start an interesting competition about where to capture the carbon from.

“To me that’s something that affects society over the next 20 years. It’s a very, very important thing. It’s all very well to say ‘Yeah, let’s make synthetic fuels’ [but] we’ve got to get carbon from somewhere, and it’s got to be new carbon, not old[-fashioned] carbon. And there are lots of different ways of doing that.”

The 2021 regulations will have a new article 4.4 which specifies the make-up of fuels, including a percentage (still to be determined) of bio content components.

“At the moment there is a bio component in there but within Formula One we’re very, very focussed on sustainability and in the fourth quarter of this year we’ll be making some very big announcements about sustainability and the sport as a whole.

“We hope to move to an energy-based formula, rather than a fuel mass-based formula. We’re hoping to move to something that approaches an E20-type fuel, so way ahead [double] of where the road industry is. We have a target to reduce greenhouse gas emissions.

F1’s sustainability programme will “catch people’s attention”, Symonds believes. “It is incredibly wide; it is not just about environmental, it’s about many, many other things. It’s an enormous programme that we’re launching. It’s a very exciting one. I can’t say any details about it at the moment but really, watch this space.”

Symonds urged F1’s supplier base “not to fear change in Formula 1, but embrace it: We’re taking proactive steps to protect what we have, and to grow it in a sustainable way.”