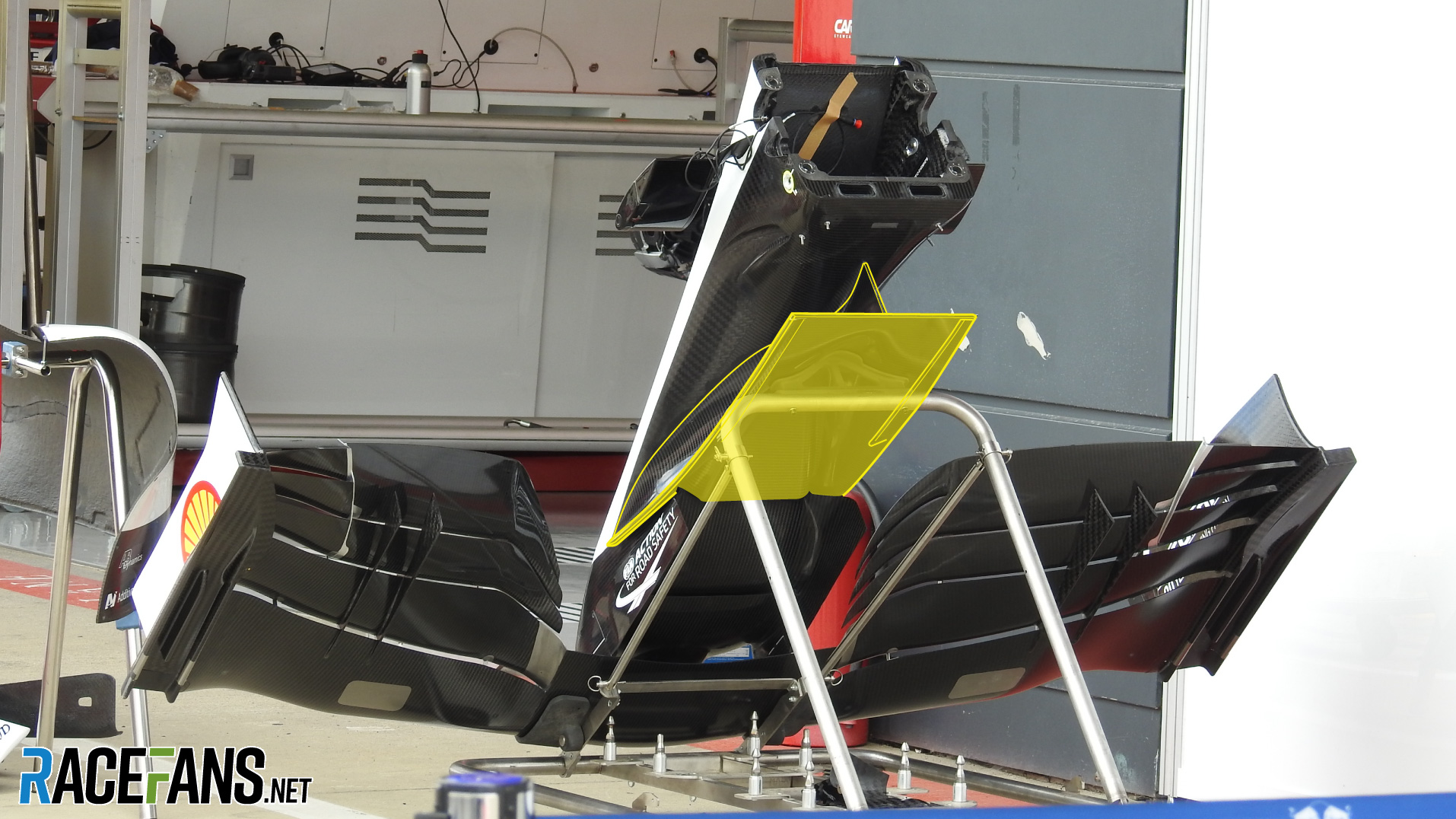 Alfa Romeo are having an up-and-down year. Its car has only suited certain track and tyre combinations.

While other teams with similar problems have held back major aero updates while they get to grips with them, Alfa Romeo continues to push on with major revisions to the C38. At Silverstone the front end was updated, while an unusual cockpit detail was discovered on Antonio Giovinazzi’s car.

The team’s Silverstone update included the addition of a cape under the nose vane, plus a revised nose cone and front wing. This makes Alfa Romeo the seventh team to adopt the cape pioneered by Mercedes in 2017.

Having already developed quite a complex nose arrangement, with the holes through the nose tip and S-Duct, the addition of the cape (highlighted yellow) make the C38’s one of the most complex on the grid.

Even the cape its itself is enhanced with long slots along its edge to produce a stronger vortex spilling from its trailing edge, which feed into the bargeboards downstream. Further changes were made to the shape of the front wing mounting pylons to direct the airflow into the various inlets around the nose tip.

On the front wing, the basic shape was retained, but several details on the end plates were changed. Firstly, the footplate section was revised into a squarer edged shape, with pronounced sidewalls. The tunnel formed by this revised shaping also features a unique fin (1) and as with several other teams the footplate tunnel flattens towards the rear (2).

These changes are related to the inboard-loaded front wing philosophy, making the bargeboards and end plate work harder, to create ‘outwash’ and improve the overall efficiency of the car’s aerodynamics.

Inside the cockpit on Giovinazzi’s car was an unusual piece of foam padding. Already the regulations demand an ‘M’-shaped foam pad is fitted between the dash bulkhead and pedals, to protect the driver’s legs in a crash. The dip in the middle of the ‘M’ shape is clear: The steering column passes forwards from the wheel to the steering rack.

But on car 99 there is an extra piece of ‘Y’ shaped padding below the steering column section. Giovinazzi confirmed this was used to support his legs through corners, enabling him to brace not simply against the footwell walls, but also against this ‘Y’ piece. Some drivers have a section of the seat sticking upwards to cradle the thighs in a similar manner, but Giovinazzi’s solution appears to work better.