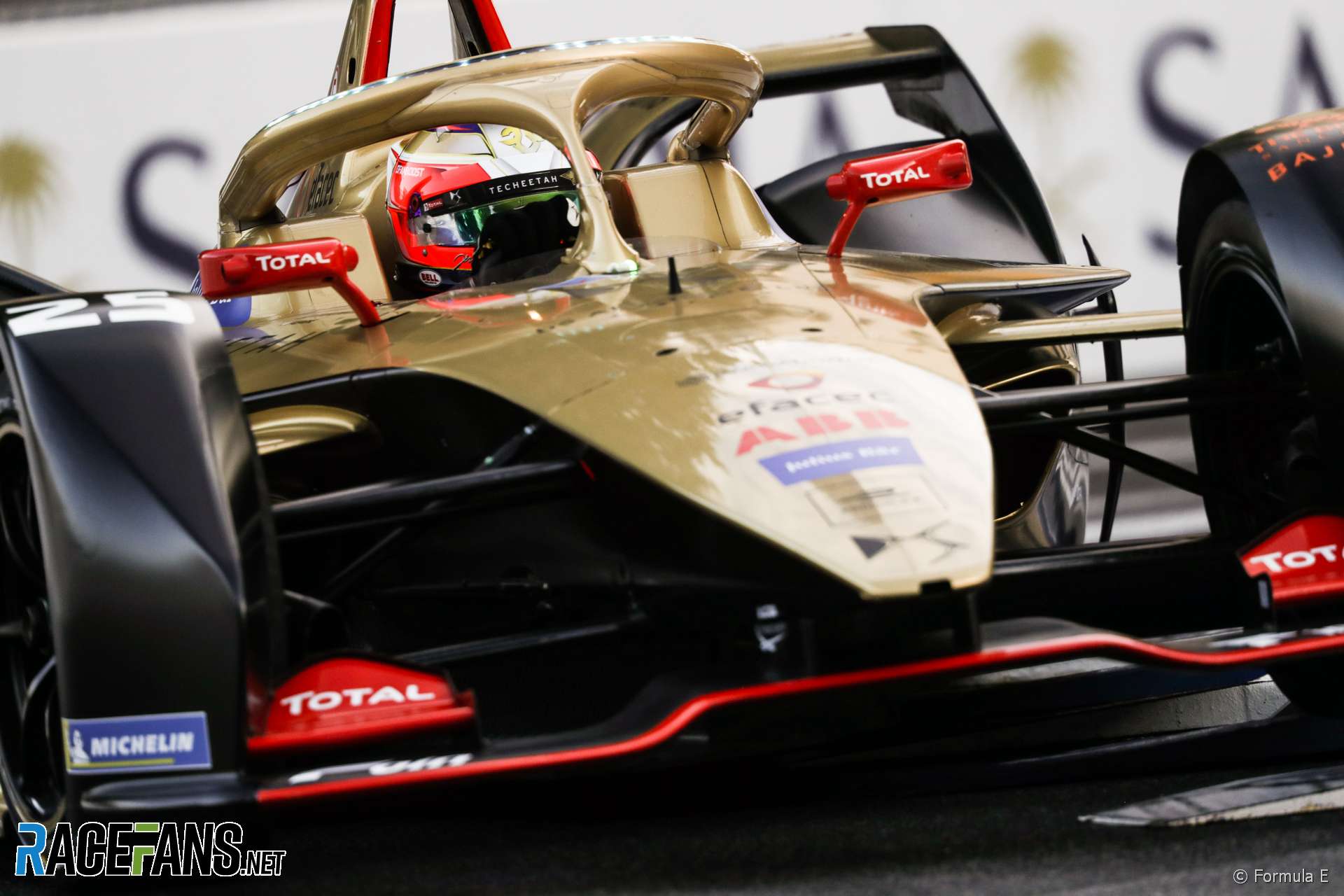 After less than 30 seconds of racing on the extremely tight Bern track, third-placed Sebastien Buemi turned across the chicane while fighting with Mitch Evans for second place. As he did, his back wheel hit Pascal Wehrlein’s front and sent the Mahindra bouncing, flying into Maxi Gunther’s Dragon and jackknifing across the chicane.

Robin Frijns, fighting with Andre Lotterer and Daniel Abt, was hit from the rear – possibly by Felipe Massa, before spinning across the track and into Alex Lynn, who ended up the wrong way around and in the wall. Frijns’ car was unable to continue but Lynn and Massa returned to the pits, along with several other cars carrying damage.

The race was immediately red flagged, with drivers who were able to returning to the pit lane. Race director Scot Elkins decided that, as it was unclear how many drivers gained places by cutting the chicane post-collision, the restart would be in starting order – to the extreme displeasure of several back-starters who had made up large numbers of places and energetically took this argument to race control while waiting for the restart.

By the time of the restart, 40 minutes after the race was red flagged, only Frijns was officially out of the race. Having retaken their starting positions, despite some complaints, the drivers got away cleanly and avoided another collision before spreading out in pack order.

Evans got on the radio with 35 minutes remaining to say that he couldn’t understand why Vergne was “so slow” trying to pass the leader. Almost immediately after, Mortara was sent skidding into one of the few run-off areas on the circuit, luckily escaping the wall after being hit on his rear by Gary Paffett.

D’Ambrosio was issued with a drive-through penalty for causing the collision that took Frijns out of the race, before the red flag period, while the incident involving Mortara, Paffett and Sims was placed under investigation.

With just under 30 minutes remaining, Sam Bird passed Maximilian Guenther on the inside of the hairpin, smoothing exchanging places to move up to fifth, while Evans remained frustrated behind Vergne – and his teammate Lynn held off Lotterer, further down the pack in eighth and ninth place.

Pascal Wehrlein began tumbling down the order with 27 minutes to go, stopping on track with what seemed to be a total loss of drive. As a consequence, a full course yellow was called to retrieve his car – neutralising the close fight between Vergne and Evans. Last time he’d gone up against a Techeetah for the lead, in Rome this year, Evans was able to leverage an energy advantage to hold on to the win – but with a significant full course yellow period, the slight efficiency gain would even out.

The green flag was waved with 21 minutes remaining, sending the lead pair straight back into the fight. Evans activated his second Attack Mode behind a still-slow Vergne, lapping virtually the slowest of any car still on track but was unable to get past – Vergne himself then activated the extra power mode and picked up the pace, defending against Evans with similar lap times at last.

With four minutes remaining, Lotterer – who had moved up to fifth – managed to pass Bird in exactly the same place Bird himself had passed Guenther earlier. The top five cars remained nose-to-tail to each other, Evans still trying to pass Vergne with Buemi just behind him.

Lotterer’s engineer informed him there was light rain at turn one with two minutes to go – and with one minute to go it was clearly raining, the skies opened over the track the lead four still inches apart from each other and Evans desperately attempting to make the pass for the lead.

Evans continued his attempts over the last lap, crossing the line alongside but not ahead of Vergne – who takes the win and extends his championship lead to 32 points before the final two rounds in New York next month. Home racer Sebastien Buemi completed the podium.

Jean-Eric Vergne also takes the European Races trophy for the most podiums during the European leg of the Formula E championship.