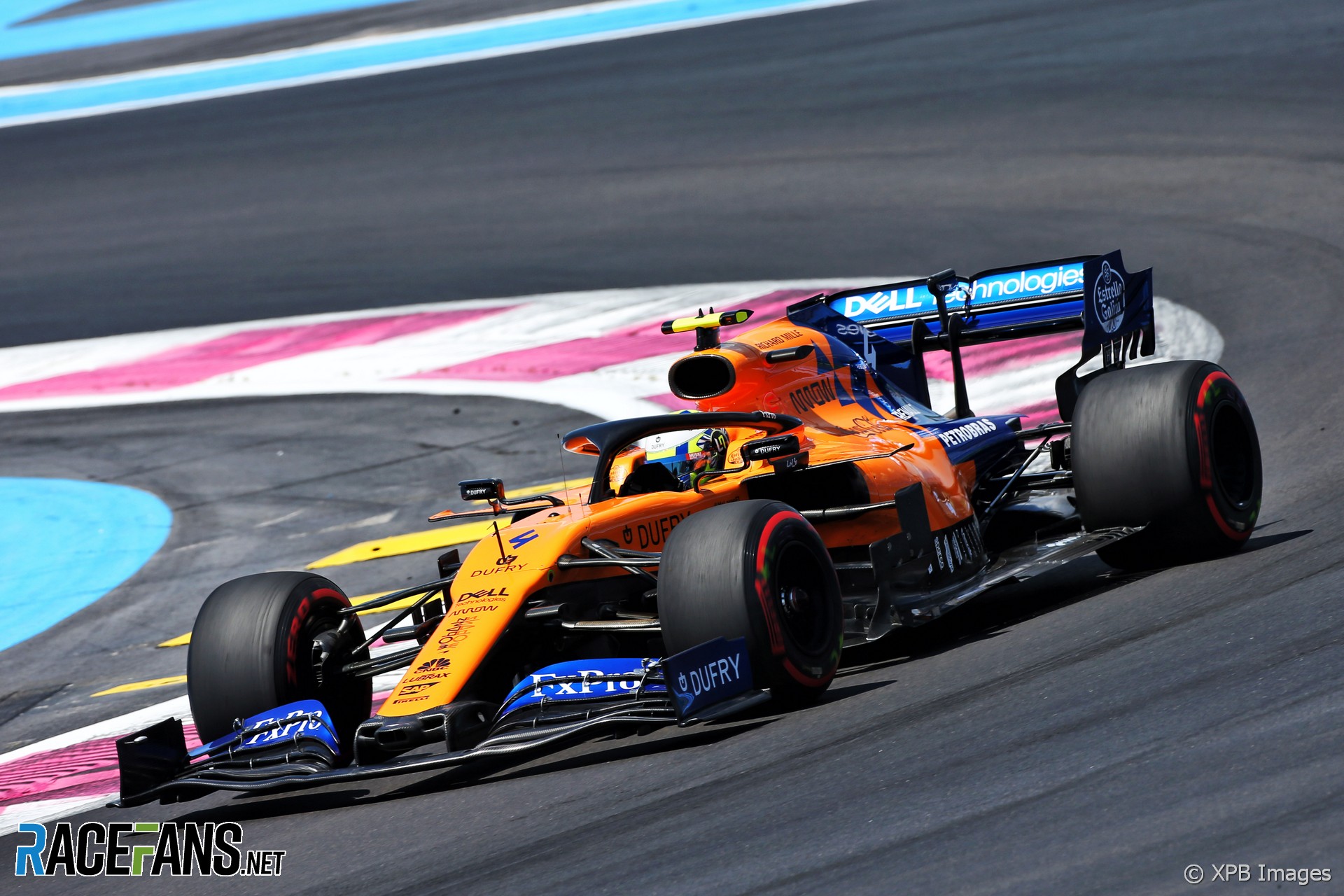 McLaren have followed the practice adopted by rivals including Mercedes and Williams by using a suspension trick to lower their car’s ride height while cornering.

The team has done this by increasing the offset of the pushrod mounting in their suspension.

All teams have exploited a suspension solution called ‘pushrod on upright’ for over 10 years. It’s a relatively simple set-up where the pushrod that controls the wheel’s movement is mounted to the pivoting upright and not the lower wishbone.

Currently the teams use the POU geometry to lower the car as the wheel is steered. This reduces the front wing’s gap to the ground and the rake angle of the long underbody is kept constant, rather than rising and lowering as the brakes are used on and off through a corner.

Just two years ago quite extreme POU geometries were being employed, such that the pushrod mounting extended out through the wheel and the pivot point could be seen emerging from the brake duct. This extreme practice was cracked down on, with similar reasoning to the ban on interlinked suspensions, as there was a clear aerodynamic effect.

Not published in the rules, but issued via technical directive that the media/public do not get to see, the demand given by the FIA was that for ever 12 degrees of steering lock the ride height change must be less than 5mm. Since then most teams have returned to smaller pushrod offsets, that placed the pivot point back inside the wheel or brake duct.

In contrast, many other teams now mount the wishbones much higher relative to the wheel. This means the upper wishbone does not project into the wheel, but instead a camber plate extends out from the wheel to meet the wishbone. In this set-up, the steering axis already extends outside of the wheel, so to add offset to the pushrod mounting the mounting sits well outside the front brake ducts. This makes it more visible and can appear a more extreme set-up than Ferrari’s solution, even if the actual pushrod offset is the same.

When Mercedes were noted for their pushrod offset at Monaco – onboard footage from the Fairmont Hotel Hairpin, the tightest corner on the calendar, revealed the extent of their the ride height change at the hairpin – it was realised that this was not a new Mercedes trick, but was in fact merely an extension of a long standing set-up option.

Quite how teams can legally employ such large offsets and achieve such visible ride height changes is less clear. Unless the unpublished technical directive has been withdrawn or superseded, then it may be that teams are running geometries still within the 5mm ride height allowance at lesser steering angles, but greater steering angles the POU effect is proportionally greater. However it is achieved so far this season we have seen Williams and now McLaren greatly increase the POU offset.

This weekend McLaren can be seen to have a pushrod pivot well inboard of the brake duct and even greater than when the car appeared at its launch. This should give the drivers some extra consistency and performance through the corners from the better controlled front ride height as the driver turns the car through corners.

Given their strong performance in today’s qualifying session, where they lapped 3.5 seconds faster than last year and claimed the third row of the grid, it and every other innovation on the MCL34 will have the eye of the team’s rivals.