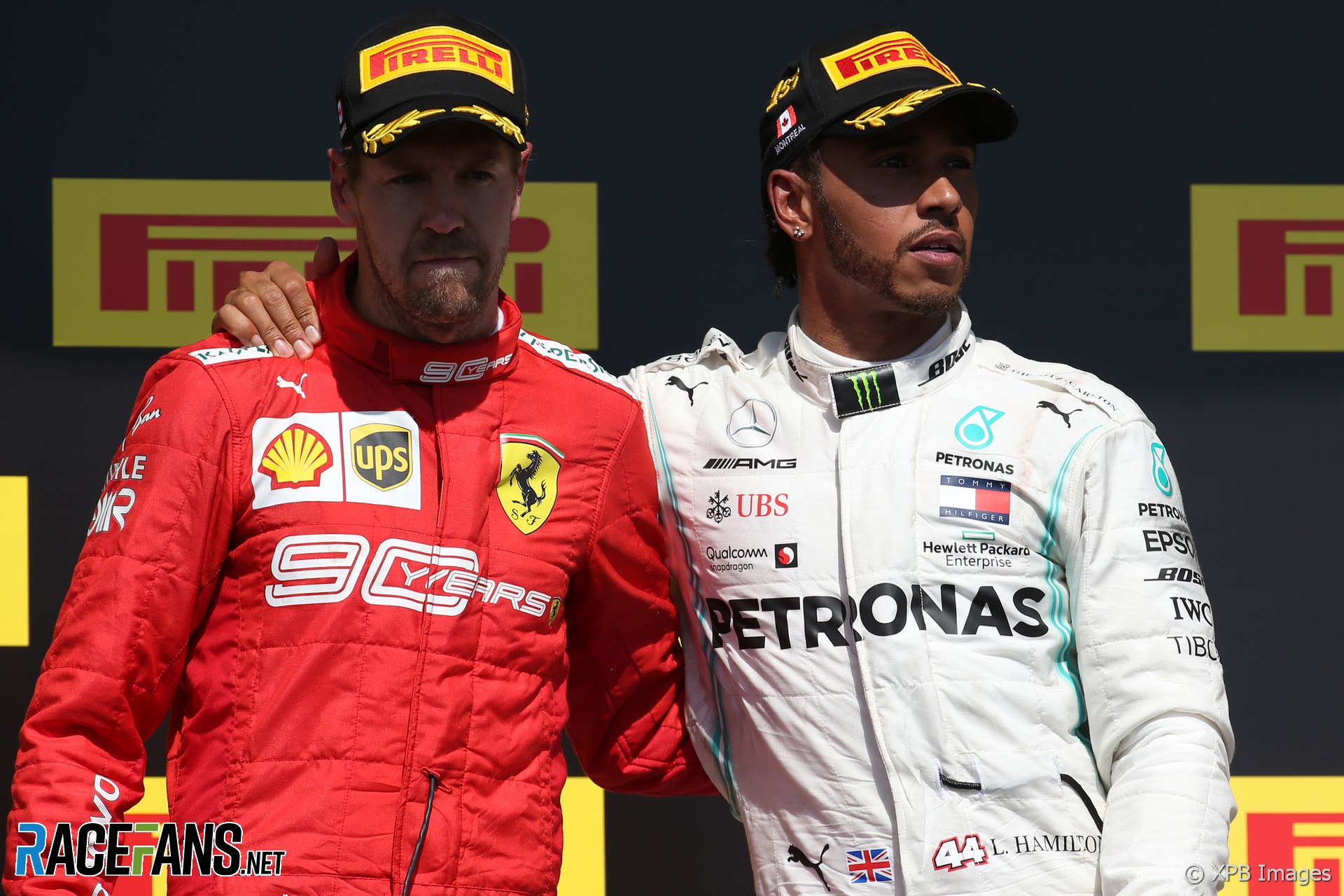 In the round-up: Sebastian Vettel criticises spectators at the Canadian Grand Prix who booed Lewis Hamilton, who won the race after the Ferrari driver was penalised.

There’s nothing wrong with what’s been going on between Lewis and myself. I think it’s not him deciding.

We have very great respect for each other. I heard some fans booing when Lewis got his trophy which I think is not right. I think the both of us today drove a really strong race and were fighting very hard. In this way I will defend Lewis 100%, it’s nothing to do with him.

The abuse being hurled by some at @Emanuele_Pirro over the #CanadianGP penalty is disgusting and, unsurprisingly, largely comes from those parading their ignorance about his achievements as a five-times Le Mans winner.

We’re sorry to those fans that who were unable to watch the Canadian GP on F1TV Pro this weekend.

We have identified those fans impacted. We will be in contact and compensating those users impacted.

1987 Long Beach Grand Prix. Mario wins from Pole with Adrian as his engineer. I remember like it was yesterday. From shoreline straight grandstands! @MarioAndretti pic.twitter.com/9NzBumxX6X

Vettel was asked whether he regret swapping the '1' and '2' boards in front of Hamilton's car after the race. #F1 #CanadianGP pic.twitter.com/29u037b5tp

"We will focus on sportscar racing at first, before applying learnings to other categories of racing, which could be within the endurance arena or in other racing series."

"Toyota has played down speculation that ex-Formula 1 driver Fernando Alonso could make his World Rally Championship debut on Rally Spain later this year."

"These (drivers) put their life on the line and so do we (the pit crews). That's why we enjoy it."

Lawson on 'difficult' pathway from New Zealand to F3 (F3)

"It is difficult coming from New Zealand to race in Europe, it is one of the hardest things that you can do. I have known Marcus (Armstrong) since I was eight or nine years old, but he is older than me, so he has usually been the age group above me."

"I am not so big on movies really, I prefer TV and have just finished watching ‘Formula 1: Drive to Survive’ on Netflix. I was very keen to find out how Netflix would show the racing world and I was nicely surprised."

Vandoorne is ready for his first Le Mans (WEC via YouTube)

"Emanuele Pirro represented the driver element on the panel, and he is a passionate and knowledgeable racer who has given way more back to motorsport than he has taken and continues to do so."

"£50,000 appeal to erect a statue in memory of the Formula 1 ace Tom Pryce in his hometown of Denbigh to inspire future generations."

@David-br raises an intriguing ‘what if’: What would Max Verstappen have achieved this year in a Ferrari?

Verstappen would clearly be signed by any team who could afford to the fee. He’s a multiple champion waiting to happen. But as Alonso knows all too well, the path has to be very carefully chosen.

I’ve little doubt Verstappen in a Ferrari this year would be making a respectable job of keeping close to the Mercedes. But are Ferrari ever going to properly sort themselves out?

Mercedes look the best option for someone of Verstappen’s ambition/talent. It depends if he has the patience to sit out another one or two years to see of Red Bull can return to championship level with Honda. Especially with the big changes coming up, it may be worth it.
@David-br

27 comments on “Vettel: “Not right” for spectators to boo Hamilton”