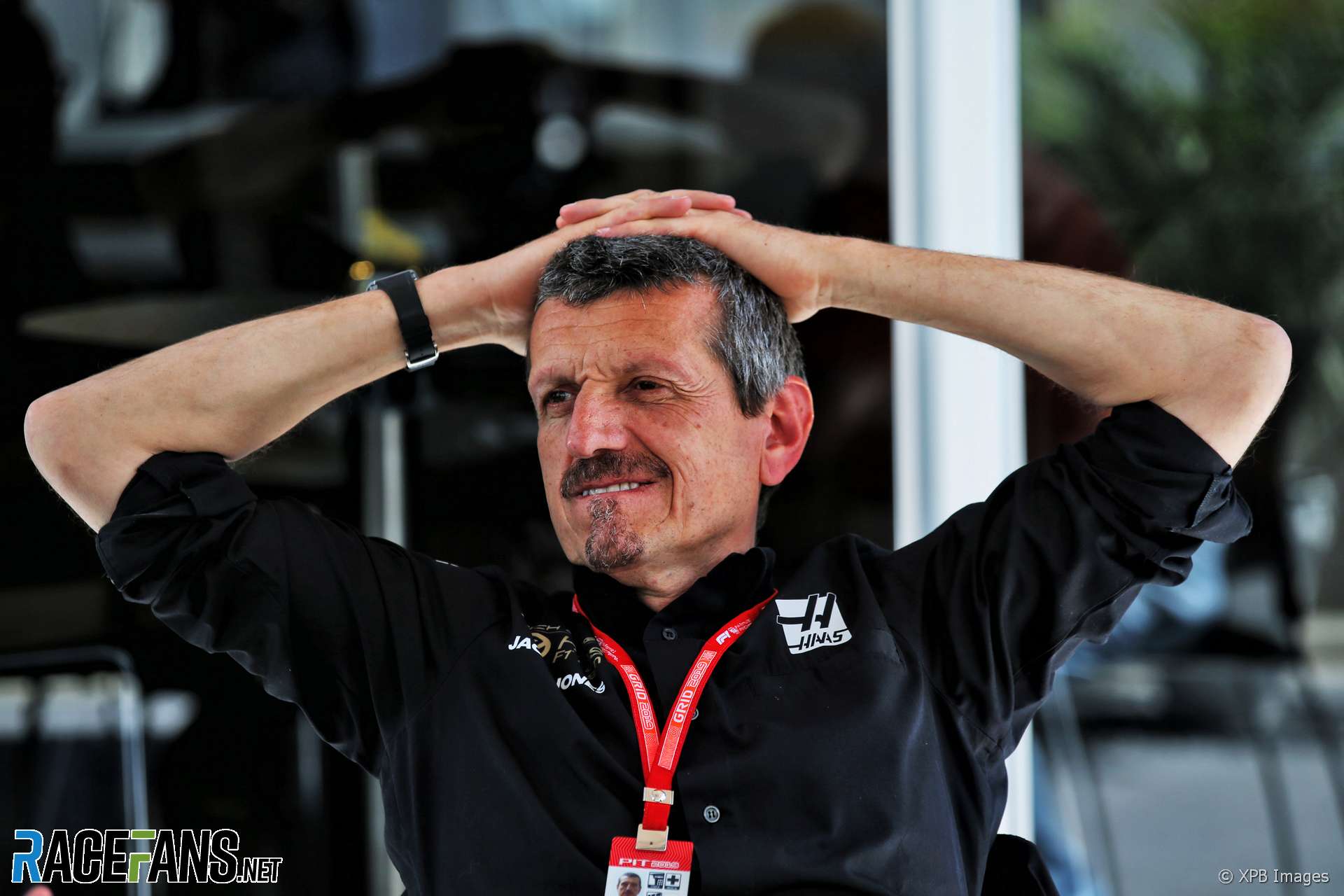 The long-running dispute between Haas and Formula 1 Management over prize money may be coming to a head, @DieterRencken reports from Montreal.

Longueuil is a city on the southern banks of the St Lawrence River in which the Île Notre Dame – an artificial island, venue for the Circuit Gilles Villeneuve – is situated, and is thus opposite Montreal. The distance from apartment to circuit is around five miles, taking 20 minutes in peak traffic – and thus makes for a more convenient base than Montreal centre.

The history of Île Notre Dame itself is fascinating. It was created in 10 months flat from 15 million tons of soil excavated during construction of Montreal’s metro system, and played host to the 1967 Expo and various (1976) Olympic aquatic sports.

It’s been upgraded a few times since then – indeed the entire pit and paddock we relocated from the opposite end of the island in the eighties. And this year we have a brand new facility to check out.

Head for circuit, stopping en route for breakfast – the circuit supplies fine media catering, but I’m unsure whether they’ll be up and running today. As I cross the bridge to the circuit I’m amazed at the number of spectators arriving on foot from the metro stop – it seems like tens of thousands, and it’s only Thursday. A heartening sight. 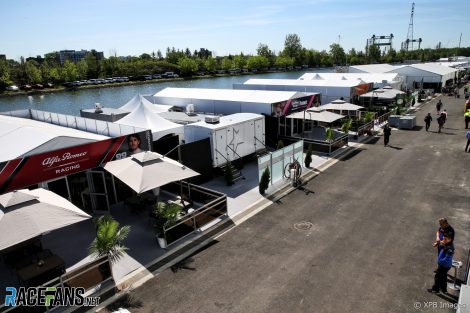 Settle into the (new) media centre: We’d previously been housed in a large tent that flapped every which way during the region’s not infrequent storms, but after many false starts the new wing – also housing larger team garages – is ready.

Hopefully the rickety ‘over and under’ bridge across the rowing bowl will be replaced sometime during the next 10 years, as Lewis Hamilton remarked during the later FIA press conference…

Wander about the paddock catching up on news and views, including follow-up on the alarming incident involving Sergio Perez and a couple of marshals in Monaco during the Safety Car phase. Checo tells us how he first alerted the authorities to what had happened when he had been summoned to the stewards to discuss another incident in the race involving Kevin Magnussen. 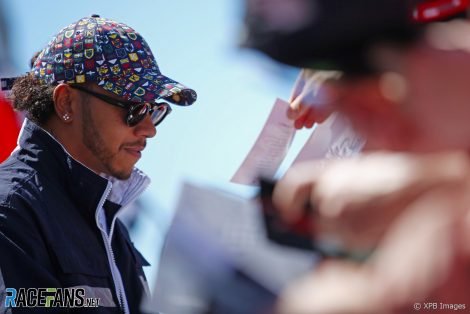 FIA press conference, and I’m please to hear Hamilton call the track “one of three top circuits”. He names Silverstone and Austin as his other favourites.

“[At] Austin, you can overtake,” he explains. “It’s a brand new circuit but it’s got a lot of great character, you can actually follow.

“Same with here, it’s a race track where you can get quite close. It is a street circuit on this incredible little island in this big city and it’s just very unique in its own way. It’s very high speed braking, big stops and there are some big curves.

“The Silverstone Grand Prix, that track has history galore, the layout is just incredible. It’s all high-speed and medium-speed and it’s the ultimate test, probably of all the tracks, of the downforce of a car. You’ve got some of the coolest sections: Copse, Maggotts, Becketts, Stowe. Those sectors, that whole combination, I don’t think there’s many tracks in the world that have a better combination of corners in my personal opinion. But also there, you can, being that it’s wide enough, you can naturally follow and there is some really good racing there so that’s why it’s my personal favourite.”

I’m keen to discuss the status of Haas’s long-running claim against Liberty for back compensation, but team principal Guenther Steiner isn’t. The dispute has its origins in F1’s commercial rights holder Liberty Media’s response to Force India’s rescue from administration last summer. The team was treated as a continuation of its predecessor and awarded full financial benefits despite racing under a ‘new’ licence after Force India plunged into administration. 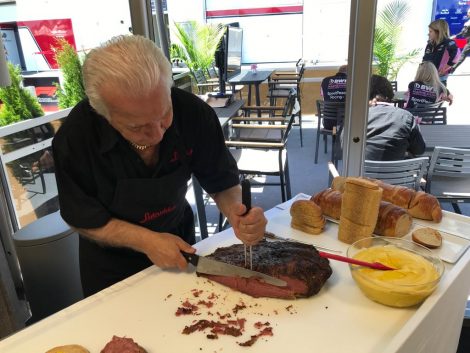 However I hear elsewhere that all paperwork in the matter has been exchanged, and that a hearing at F1’s International Contract Recognition Board is the next step.

A refreshingly open interview with McLaren’s new team principal Andreas Seidl, the man who led Porsche to Le Mans victory, for an upcoming feature on RaceFans. This one is definitely worth waiting for.

The interviews come thick and fast. Next is Kevin Magnussen,who is in excellent form. “Driving these cars is just phenomenal,” he grins. ”It’s such a pleasure driving these cars. You know there’s nothing better in the world…”

“Nothing. There’s one thing that comes close. [But] it only comes close…” Cue much laughter as a Danish journalist says, “He’s getting married soon”. A date is set for August, I’m told. 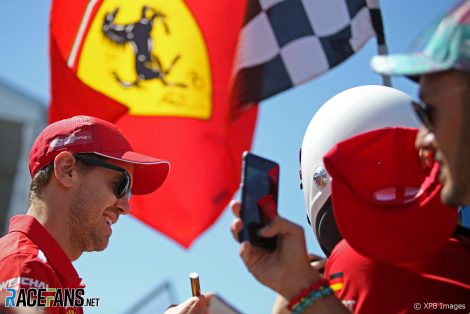 ‘Fake news’ is a theme of the afternoon. First Sebastian Vettel refutes lurid claims he will hang up his helmet a year before his current contract expires to make way for Fernando Alonso. Then Nico Hulkenberg slams rumours that he’s heading to Red Bull as replacement for Pierre Gasly; the latter calls the reports “bad journalism”.

Next up is George Russell: the Williams driver corrects comments attributed to him that he thought he’s place sixth in Monaco, saying he felt like a “dick” when he read them.

And it’s not just the media in the drivers’ crosshairs, as Robert Kubica disputes claims in a pre-race press release from Alfa Romeo (previously Sauber) about – of all things – what happened to the bottle of champers he received on the podium after winning the 2008 Canadian Grand Prix.

Day done, it’s time to depart for apartment, picking up take-out dinner en route: shwarma, rice and salads. As F1 Thursdays go, it’s been one of the better ones.