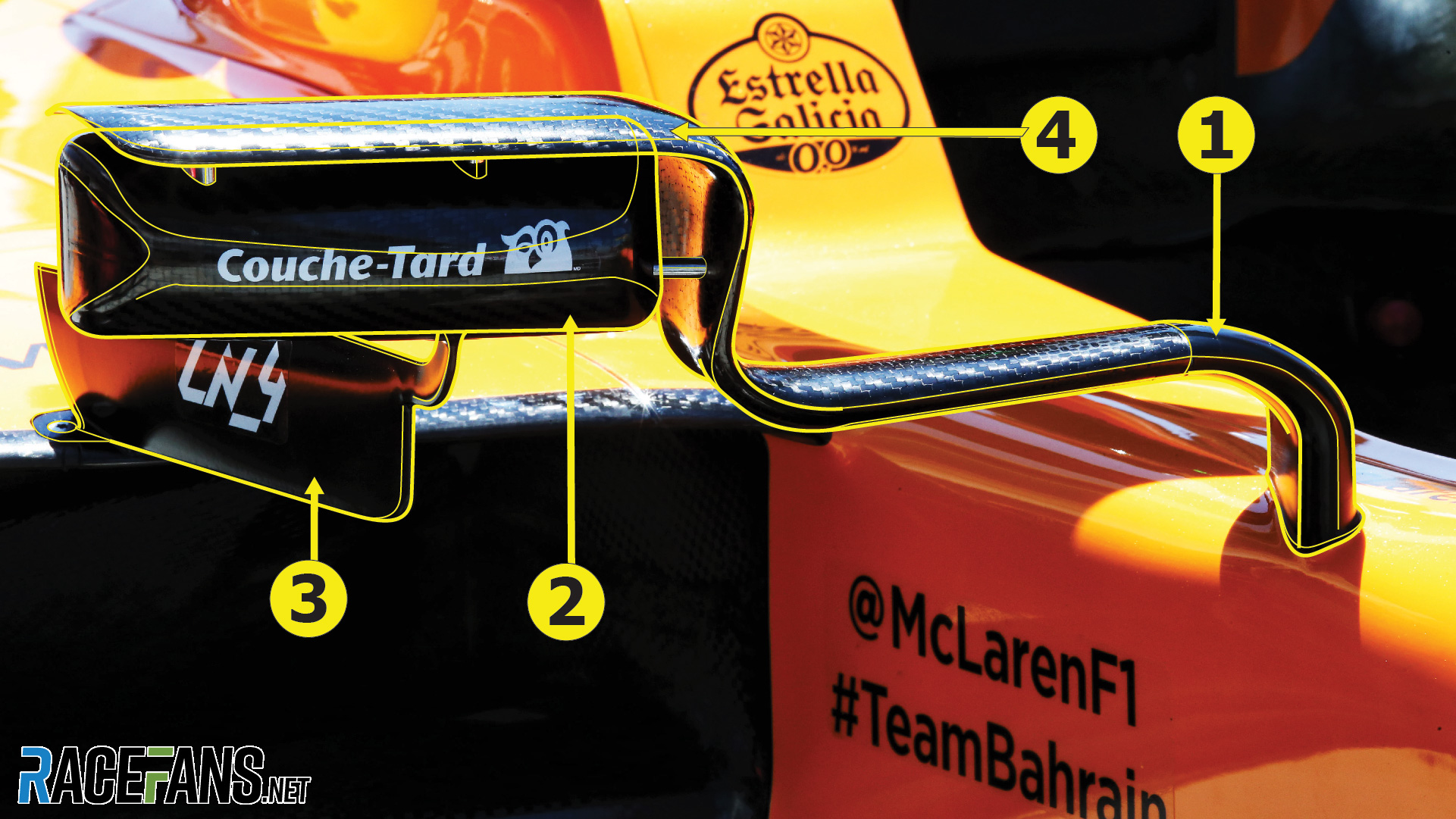 In the field of F1 aerodynamics, the humble wing mirror may appear to be a small detail. But several teams are converging on a new and beneficially aerodynamic solution for how to package this mandatory part of the car.

New rules enforced this year to restrict the teams to just two mirror mountings, as well as a further outboard mounting position. This has opened up the potential for some aerodynamic gain. Many teams’s mirrors now sport a vane over the top of the housing, which help direct airflow downstream over the car. This weekend McLaren and Toro Rosso have already appeared with such designs, while Mercedes have previously tested, but not raced, the concept.

Mirrors are a necessity from a driver point of view, but an obstacle for a designer. The bluff mirror pod shape creates turbulence as the airflow folds in on itself behind mirror, so the positioning of the mirror housing is critical to ensuring the downstream bodywork isn’t upset by this airflow.

Previously we have seen mirrors mounted higher and wider apart to control this unwanted turbulence. But that comes at the cost of good rear vision for the driver, so the rules have been redefined to position them within quite a specific space.

While the mirror housing had been a problem for the designers, the mounting stalks have become an opportunity, using the mounts to direct airflow like a turning vane. This is especially useful as the rules limit other bodywork in the area around the cockpit.

Seeing these potential benefits, the aerodynamicists have gone to work in recent years, exploiting the mounts and forming ever more elaborate shapes to use the stalks as flow conditioners. Not satisfied with just the shape, the number of mounts has also become a trick to play with the rules. Last season Force India had three mounts, Red Bull had two over-elongated vanes and Ferrari overdid things with the obviously aerodynamic fin extending from their halo mounted mirror, which was scotched by a technical directive.

Therefore, this year the mirror pod (1) is defined in much greater detail in the rules, so too are the mountings in both their number and how they may connect to the mirror housing. It was obvious that teams can therefore exploit two mounts, one vertical (2) going back to the sidepods and another stretching inboard to the cockpit opening area (3).

Each of these are far larger than is required for the structural job of supporting the mirror out in the airflow. Thus, their purpose are quite legally for aerodynamic gain, directing the airflow down and around the sidepod’s top surface.

Clearly the FIA are content with the interpretation that the vane is part of the mirror housing and have allowed teams to freely run this design. This is different to the apparent legality problem with Williams pre-season mirror design which merged the mirror glass, mirror pod and lower mounting into a singled curved part, and raised the concern of some rival teams.

As the general airflow tends to be rising upwards off the front wing and towards the sidepods, the vane acts as a down-washing device to keep the airflow attached over the sidepod tops, which in conjunction with the sidepod shaping leads more airflow over the diffuser area.

We now see Red Bull, McLaren, Toro Rosso and potentially Mercedes running such a design, with Renault and Williams running a slight variation based on Ferrari’s 2018 vented mirror pod. Rules for 2020 further restrict what teams can do with their mirrors, but do not specifically ban this interpretation.

9 comments on “Analysis: How teams are looking at their mirrors to find aerodynamic gains”