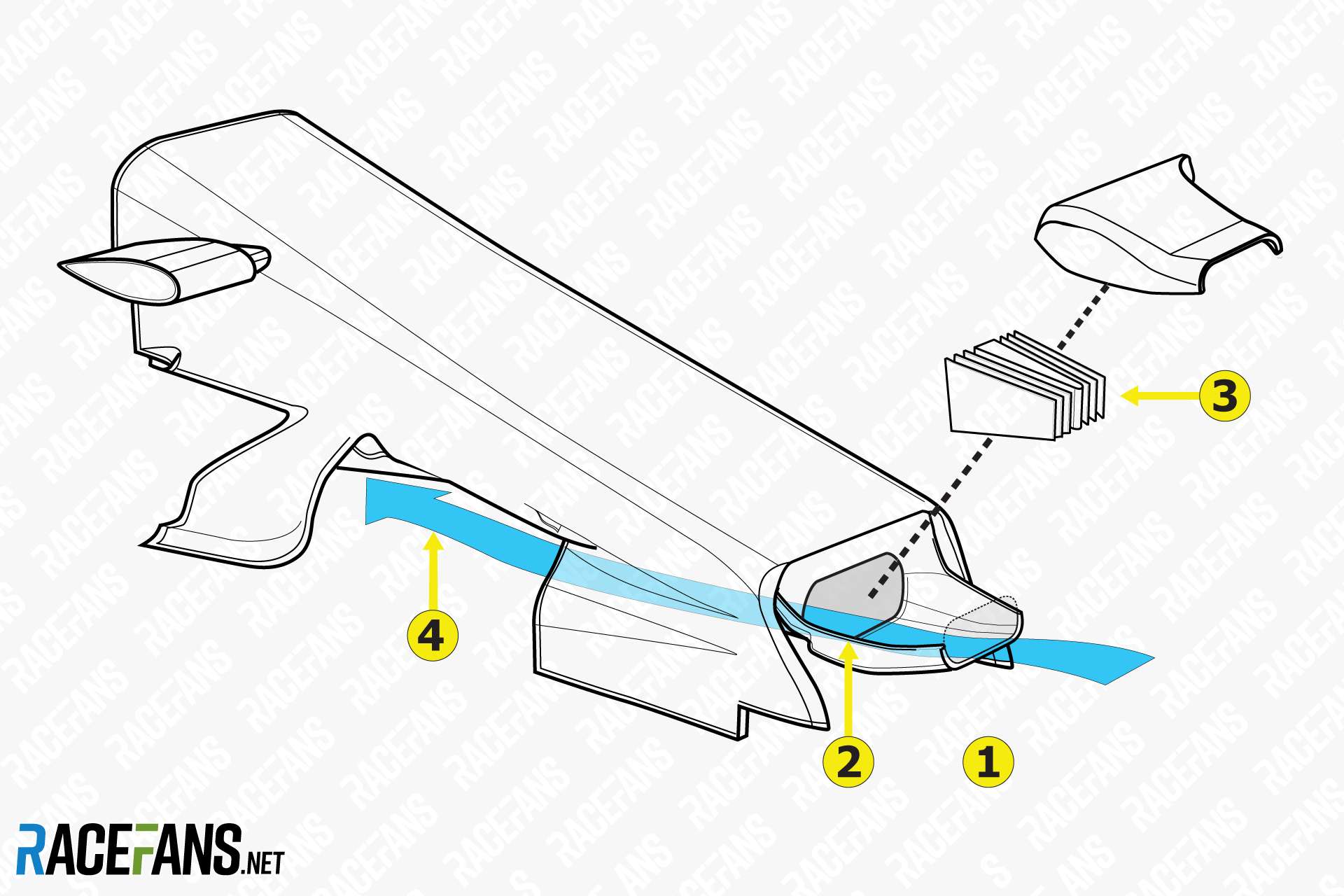 Red Bull normally follow their own path on aerodynamic design. So it’s unusual that in Monaco they have both discarded one of their unique solutions and copied another team’s ideas. The RB15 sports a new nose tip and added fins on their floor’s edge this weekend.

As the nose tip regulations have changed over the years since 2012, Red Bull have always found their own way to treat their nose design. When the rules changed again in 2017 the RB13 sported an innovative open nose tip, this solution has stayed on the car, largely unchanged since then. However, for Monaco the nose tip has been blocked off for the first time.

The nose hole concept is a way to workaround the nose tip regulations. These rules were put in place to force teams to lower the noses and reducing the dangers associated with car-to-car contact.

Additionally, the rules seek to enforce a minimum cross-section to the nose tip to prevent it spearing through another car in a crash. Both these safety related changes make the passage of air between the nose and front wing more difficult, as the nose tip blocks the airflow.

Red Bull’s solution was the nose hole. The open tip still meets the height and minimum cross section rule, albeit air can flow through the middle of this area. In the cutaway diagram the open tip (1) allows air (shown in blue) to pass though and exit through an outlet (2) below the nose.

The purpose of the airflow is to clear the blockage of the nose tip to the air passing over the middle of the front wing. What’s more, this improved airflow makes the air passing up under the nose’s surface cleaner, preventing stagnant airflow to build up forming a boundary layer on the underside of the nose, this in turn allows the turning vanes and bargeboard to work more effectively aiding the car’s aerodynamic efficiency.

The key difficulty in designing this nose hole solution was the single-open-section regulation, a rule introduced specifically to ban holes in the nose. This was introduced in 2009 after Ferrari raced in 2008 with hole passing up through the nose from below.

There is a loophole to the single section rule: if you can arrange bodywork in the hole which prevents a clear view through the opening, then it is deemed legal. This workaround is used by Racing Point with its ducted nose, plus Alfa Romeo and McLaren who have since adopted similar ideas. Red Bull’s solution to the single section rule, was a series of vanes (3) inside the opening, each angled and offset from the next to allow air to pass through, but no opening being visible from head-on.

It remains to be seen whether this is a ‘Monaco special’ arrangement for Red Bull. It might that this is just for Monaco and the closed nose provides a different airflow for the front wing. However if the hole remains closed for Canada and subsequent races, perhaps Red Bull have found the streamlined but more obstructive nose works better than the more complex inner-vaned open nose.

Elsewhere, on the RB15 there were new fins along the floor’s edge. Similar fins have been a Ferrari innovation and when the Scuderia introduced them last season, Red Bull were quick to react with 3D-printed test parts at the next race.

Ferrari have been multiplying the fins along the floor edge this season and now Red Bull have added row of four fins (1) for Monaco. These work with the floor edge and in particular with the rolled edge of the floor (2). This area is controlling the airflow under the floor and also directing some of it back out of the edge of the floor to create ‘outwash’: the airflow used to push the turbulent front tyre wake away from the rear of the car, to improve the diffuser and rear wing function.

With the 2019 restrictions on front wing design, the floor edge is increasingly becoming a ripe area for development. The aero regulations allow unlimited use of these fins, as long as they are not more than 5cm above the floor

Red Bull’s fins are simply vortex generators, worked by the air parting around the car and over the lower leading edge of the floor. The vortices formed work with the scrolled floor edge and increase the Y250 airflow to push dirty air away from the rear of the car.

7 comments on “Analysis: What’s going on up Red Bull’s nose?”