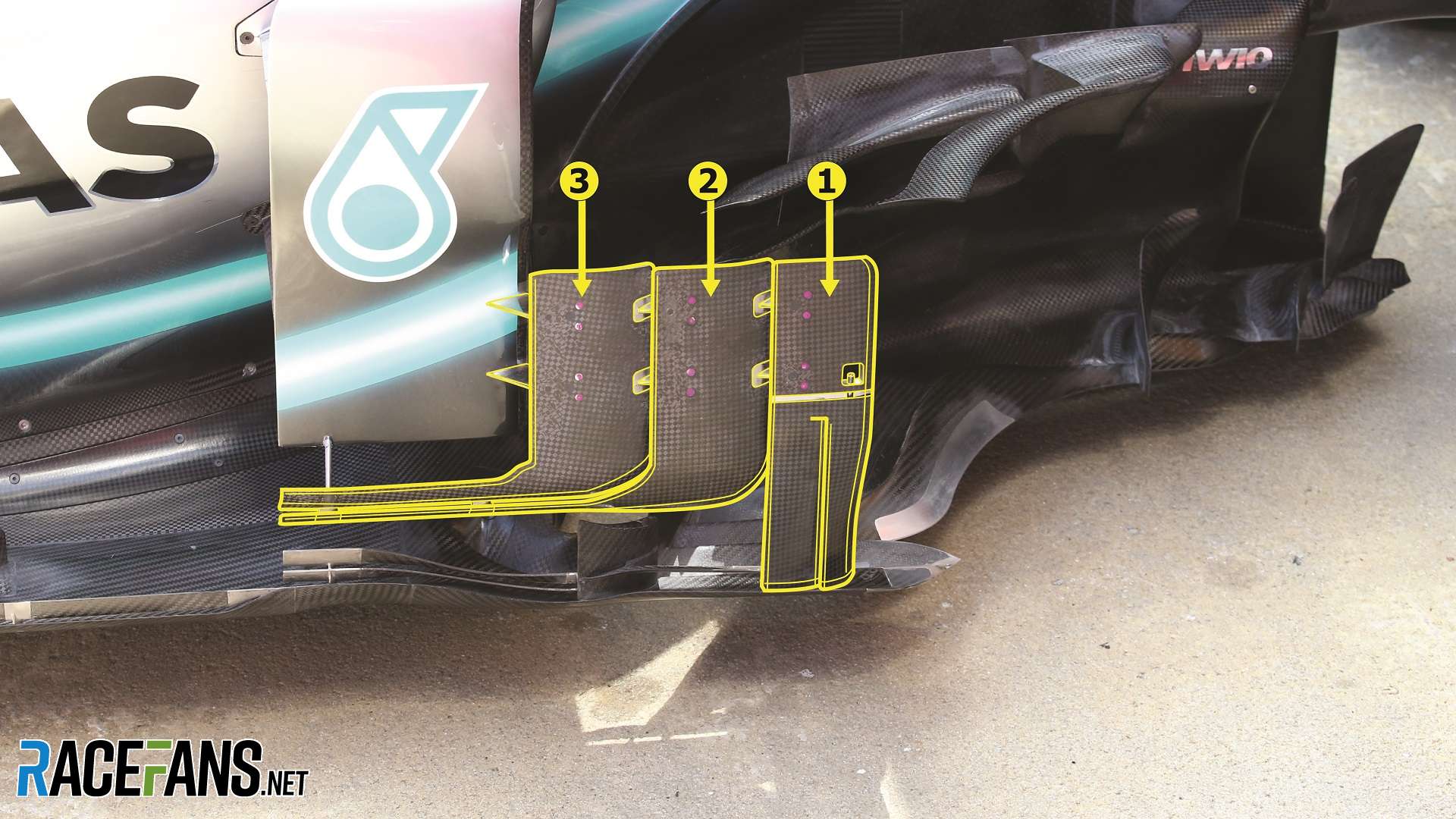 Mercedes arrive at round five having scored one-twos in the previous four races, so they are not under pressure to make any major changes to their W10.

So it’s not surprising that the updates seen in the pit lane on the day before free practice starts are minimal. Merely some detail changes to the front wing bargeboards and wing mirrors.

The changes seen so far appear to be the usual, incremental development steps seen at most races, although more parts may appear on the car when practice begins. The team’s technical director James Alison, in a recent interview for the official Formula 1 website, termed this ‘aero-porn’. These are detail updates, not a change in aero philosophy.

The new mirror mountings are the first items which catch the attention. These are similar to Red Bull’s solution where the inner mounting angles up and over the mirror pod to form a wing, and the mirror pod then hangs from two mounts below this wing.

A similar lower vertical mount below the mirror pod remains. This winglet will direct airflow downwards over the sidepod top keeping the general airflow attached over the bodywork, directed ultimately under the coke bottle area and over the diffuser.

Williams ran a similar wing section over the mirror in testing which was deemed illegal, but this was more to do with the shape of the mirror pod and the mounting below it. Red Bull have raced an even more extreme version of the same concept without complaint from the FIA.

More Red Bull similarities are apparent in the front wing treatment. This isn’t a wholly new wing, merely updates added to the inner wing tips. This solution is a workaround to the new five-element front wing rules, which effectively allows six-wing tips to be formed in the critical inner wing tip Y250 area. Red Bull have run such a wing set up since Bahrain, so there are no questions of legality with this solution.

Rather than the wing tips reaching inwards to the maximum width, the last wing flap stops short. This leaves just four wing elements at the inner wing tip, so Mercedes are able to cut one of them into two. Thus, at every cross section there are just five elements (numbered above), as far as what the airflow sees, there are six tips which are used to strengthen the Y250 vortex.

Less easy to spot amongst the complexity of the vanes and fins forming the bargeboards are several detail changes to the set up-in this area. Firstly, the small boomerang fins spanning the bargeboard area are different. The forward boomerang (1) used to meet the bargeboard with a two element section, this has been simplified to one aerofoil section, then the single boomerang behind it (2) has been doubled to a bi-plane set up (3) of two stacked vanes, the upper vane being revised in shape to suit the changes around it.

Further out from the car, the vertical vanes along the sidepods have been revised. From two small bare carbon vanes there are now three smaller vaned packed into the same space. The bottom edge of the two rear vanes (2 and 3) extend backwards under the larger fixed vane on the sidepod. While the front of the three vanes (1) reaches down and mounts to the floor with a slotted section.

These latter changes are all working with the revised Y250 airflow from the front wing and guide it out around the flanks of the car, to keep the front tyre wake away from being sucked into the coke bottle area.

With every reason to be satisfied with their progress so far, Mercedes goes into the first race of the ‘European season’ on what appears to be a normal development curve, learning from the experience of other teams and incorporating them into their own philosophy. On their own these changes aren’t going open up a noticeable gap to Ferrari, who themselves have brought similar levels of aero updates to Spain, which we’ll look at in an upcoming article.