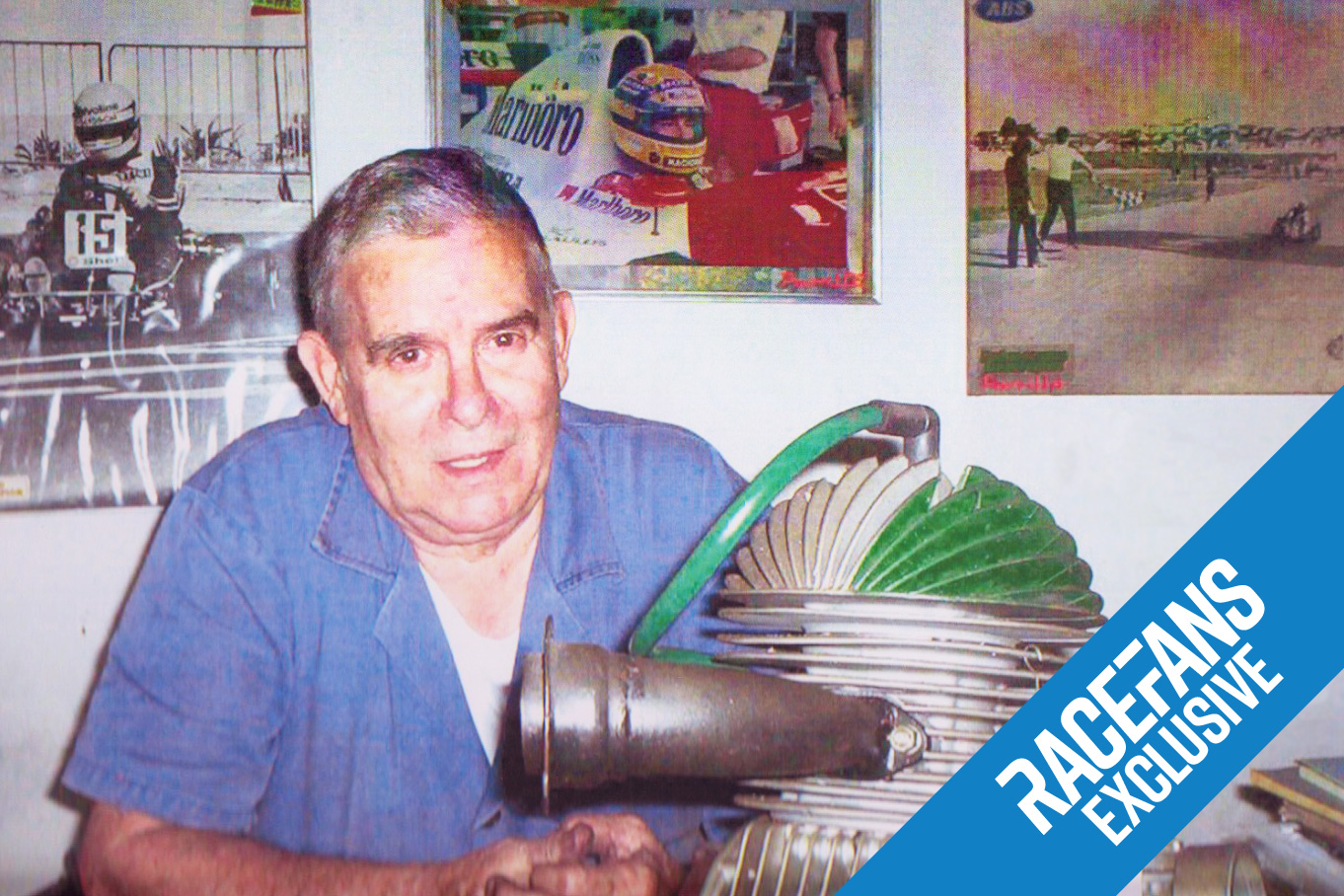 In March 2009 I advised a friend in Sydney that my wife and I would be in the city and surrounds ahead of travelling to Melbourne for the grand prix. Not only would we be most welcome to visit, said my mate Patrick Wedes, but would I be interested in interviewing Lucio Pascual Gascon, aka Tche, Ayrton Senna’s karting mechanic?

I let Patrick sweat for a micro-second before taking up his unexpected offer. It turned out one of the late driver’s staff members was marrying a Perth-based mate of Patrick’s, and she had asked Tche to do honours at the wedding. Patrick asked her whether he would be prepared to do an interview, with her acting as Portuguese/English translator – to which both kindly agreed.

The only mutually convenient time for all was early on the Sunday morning, when we’d be in a bed-and-breakfast in the Blue Mountains area. This meant conducting the interview over a flaky dial-up modem connection.

Nonetheless it yielded the most emotional yet insightful interview I’ve ever conducted – and likely ever will – despite major linguistic and technical challenges. These included the connection repeatedly dropping out, and every question being posed in English, translated into Portuguese, with the response following the reverse process. In addition, due to the language barrier, various questions or answers needed additional clarification.

We’d originally scheduled 20 minutes, but ultimately the process ran to 90, with Tche taking numerous breaks to compose himself. At one stage I apologised for posing searching questions that clearly delved into areas of deep and raw emotional pain. All credit to Tche: Where he could so easily have ducked out, he went the full distance despite the obvious distress.

So special was the end result that I decided to hold back for a special occasion, rather than publishing it randomly. The 25th anniversary of Ayrton’s untimely and tragic death provides that moment.

Gascon, known to everyone in the local karting scene as Tche, mentored upcoming racers on driving technique and car engineering. But that day tragedy had struck: One of his student had been killed in a road car accident.

Senna would go on to outstrip Fittipaldi’s achievements and become, in the eyes of many, the world’s greatest Formula 1 driver. But his relationship with Tche became a point of conflict with Senna’s family. Following his death in the 1994 San Marino Grand Prix, 25 years ago today, some in the Senna family wanted Tche barred from his funeral.

Speaking in an exclusive interview for this website Tche, who mentored Senna throughout his karting career, gave rare insight into the formative years of the sport’s most revered driver. Starting with the day Senna turned up in his garage carrying a broken kart engine.

“He brought the engine in,” Tche explains through a translator. “It was broken, and I fixed the engine. It was [done] very fast and very cheap. “But I had an argument with Mr Milton, Ayrton’s father, because it was so cheap – and usually what is too cheap is not good.”

Tche was held in high regard by the local karting community, but this first encounter with the Senna family got their relationship gave a hint of the troubles to come between them. “It caused a little problem between us,” he admits.

Among the other drivers, Tche’s services were in high demand. “I was a mechanic for 15 years before I met Ayrton. All the drivers wanted me to do their engine with him so he had to find a specific hour to receive Ayrton.”

In addition to repairing and fine-tuning their engines, Tche helped the young drivers fine-tune their racecraft. “I used to teach the boys how to drive correctly. The fathers didn’t like a lot of this kind of advice or teaching or guidance.”

This wasn’t only true of Senna’s father. The young champion also initially resisted Tche’s teaching. “When we went to the track – me, Senna and his father – I started correcting the way he used to drive, giving him some tips how to drive better and how the engine worked. Ayrton himself didn’t like much and his father even less.”

However Senna was persuaded of the value of Tche’s input the first time he put it into practice. At the Interlagos go-kart track which is now named after him, Senna claimed his first major victory.

“Senna decided to follow my guidance. He won the race, the first race. So although he didn’t like what I taught, Ayrton realised that he should follow my advice, as he won the race.”

The relationship between the two was vital to Senna’s early development as a racing driver. He began to call Tche his ‘private mechanic’. Other times they referred to each other as ‘Tche and 42’, in reference to Senna’s kart number.

But Tche’s services were in demand from other drivers as well, who became suspicious that Tche was supplying Senna with superior engines.

“Many people used to challenge me and Ayrton because they thought that I was always protecting him somehow. Many times I said it’s not only the engine – I had to repeat this many times – it’s also the driver.

“So what we had to do many times is disassemble Ayrton’s engine and lend it to someone so they could test. Because they thought if they had Ayrton’s engine they would win the race. And they proved it was not true because whenever they lent the engine, many times they failed and they lost the race.”

Another of Tche’s ruses was to give drivers the impression they had in fact been given a ‘Senna special’.

“[I would] get the engine the engine – not Ayrton’s but the other boy’s – and just change one piece and put Ayrton’s name on it and give the same engine back to the driver.

In Tche’s eyes what set Senna apart from his rivals was not special hardware, nor innate natural talent, but a fearsome work ethic.

“The difference between Ayrton and the other pilots is that he just trained. All his life he was there, training. And the others, they were not as focused.

“He was a boy at that time. And while the others were flirting, or going to a shopping centre, or whatever they used to drive a kart just as a hobby, Ayrton was there in his workshop with me assembling and disassembling the engines and training, training, training. He was one hundred percent focused.”

And when Senna tasted defeat, he redoubled his efforts. Tche tells the story of how Senna reacted to losing a race in the rain – the very kind of conditions he later became known for his mastery of.

“He had a very important race in Sao Paulo. it was raining that day and he lost the race [to] a friend of his. He [spun] the kart three times, looping three times.

“His friend who won the race came to him and he was joking about he’d lost. And Ayrton got really pissed off.

“Then what he did was Ayrton just stopped going to school and he started training even more. He said that it would never happen again. So he trained instead of eight hours he started doing 15, 16 hours a day in any weather: wet, raining. That’s why he developed his ability to [drive] in the wet.

“As he trained a lot he learned how to drive in wet, dry, hot, cold, whatever it was. Even under a storm. He was not lazy at all.”

As Senna pounded around the track, he wore his way through three sets of tyres a day, another bill Tche picked up.

But as Senna lifted his sights higher and prepared for the move to Europe which would put him on course to become Brazil’s third world champion, the rift between Tche and the Senna family only grew. Tche believes Milton grew jealous of the closeness of their relationship, that Senna came to regard him as a kind of ‘second father’.

“I have four sons. Ayrton was like a son to me, I always said that I had five sons. When Ayrton started winning a lot of races we got closer and closer.”

But that “caused many problems with the family”, said Tche. “Especially with Mr Milton.”

Following his crash on May 1st, 1994, Senna’s body was returned to Brazil. Three days of national mourning were declared.

Tche went to the funeral, on May 4th, but was met with an unwelcoming response.

This final recollection proves too much. Tche’s voice falters and trails off. Our translator interjects: “Can you please just give him a minute, because he’s a bit emotional…”