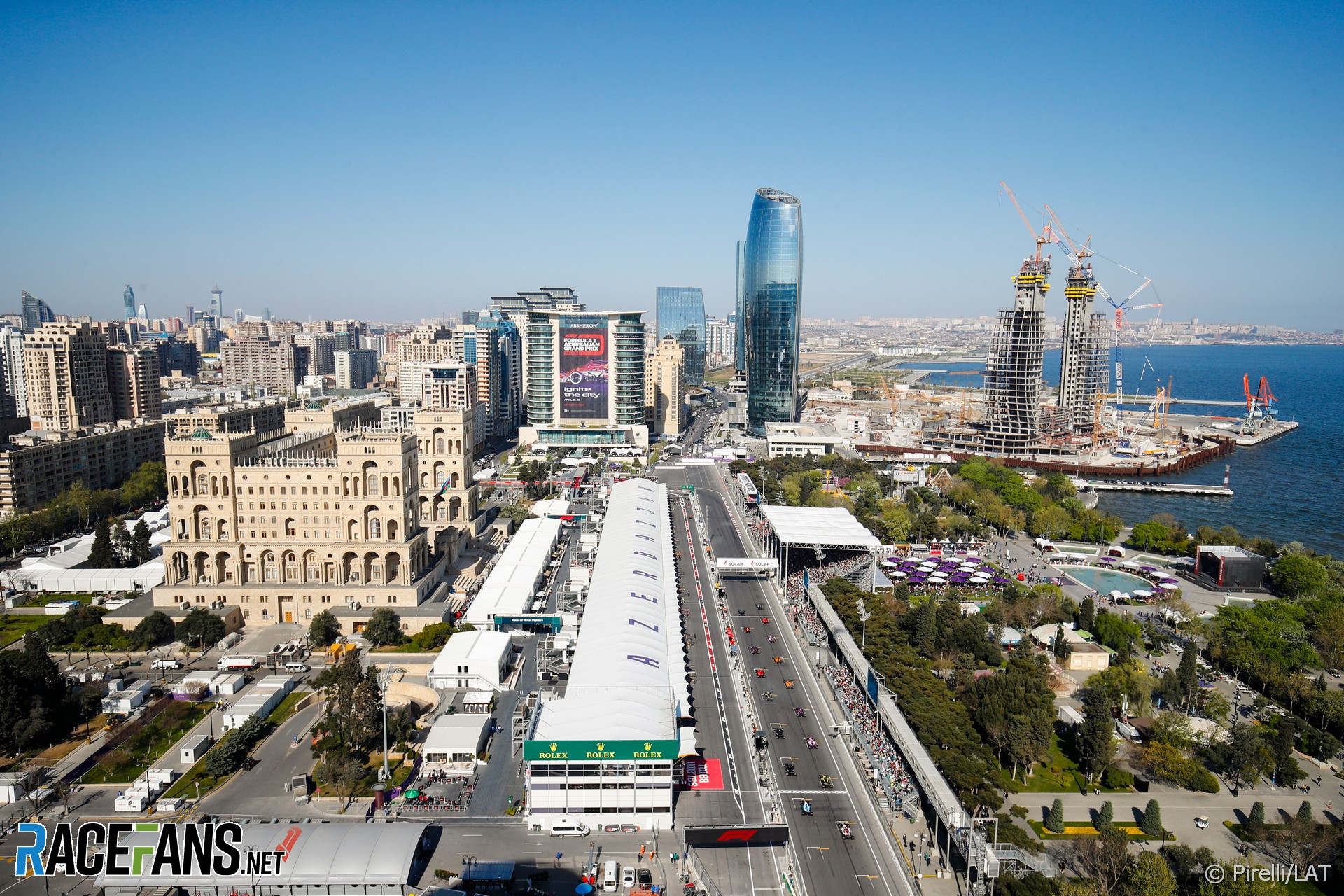 The final instalment of the Baku Paddock Diary includes the latest rumours on the 2020 F1 calendar, the 2021 rules – and the nail-biting conclusion to the saga of @DieterRencken’s lost luggage.

I wake up wondering whether my luggage has at last beaten Aeroflot’s best efforts to lose it. I get up and begin preparing for race day.

Over coffee I mull the prospects for today’s race: Mercedes or Ferrari; maybe Max Verstappen? The on-track madness on Saturday – in both the F2 race and F1 qualifying – suggests another unpredictable Azerbaijan Grand Prix as per the 2017 and 2018 editions. But Baku’s inaugural 2016 race, known as the European Grand Prix for political and commercial reasons, was positively soporific.

Head for circuit by taxi – the five-kilometre journey takes around 45 minutes due to early(ish) hour, then I catch up in the Media Centre over breakfast: pastries and fruit.

My travel plans are complicated by a change of schedule: rather than head for home in Belgium early on Monday as planned, I’m going go to South Africa via Dubai from Baku, having been invited to the annual FIA Conference, this year held in Sun City. After a little business and catch up with family and friends, I’ll head to Barcelona for the Spanish Grand Prix.

Consider shopping for (another) change of clothing at the Mall across the track while I still have a gap in my programme: Will the bag arrive, and make the purchases superfluous; if not, I don’t have time for shopping after arrival in SA. I play it safe, and shop for essentials. 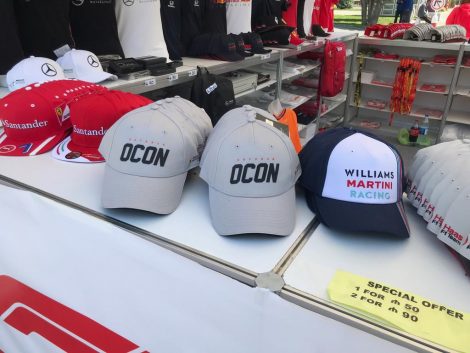 Return to Wifi range in the Media Centre. Massive relief: Whatsapp message from Sochi race promoter Sergey Vorobeyev, who has roped in heavies at SMP Racing to put pressure on Aeroflot to locate my bag. It’s in Baku and will be delivered shortly. I decide not to tempt fate and taxi it to the airport.

There it is! Massive relief washes over: I check the contents – all in order, nothing broken / missing. Thanks for all your help Sergey and SMP Racing, muchly appreciated!

On the way back I spy Esteban Ocon caps on display at a merchandising tent. He would surely be forgiven if he was the only Mercedes employee not ecstatic at the sight of Valtteri Bottas leading the team’s cars on the front row of the grid. Hopefully a return for him somewhere on the grid in 2020 is still on the cards.

Back at the circuit I take a wander. Team bosses had customary coffee with Liberty bosses on Saturday, with main topics of conversation being progress towards 2021 and the race calendar, more specifically Zandvoort and Kyalami.

The 2021 rules remain a major point of discussion. The deadline for a deal is June 30th, but, of course, the sport is nowhere near ready, the teams, FOM and FIA still debating the finer points of the rules. As a result, some teams requested a six-month delay. This, however, requires unanimity – akin to herding cats. A compromise of 31 October was proposed by Red Bull’s Christian Horner, but that still requires all teams to agree.

Regarding the Dutch Grand Prix – despite ‘scoops’ in various outlets that a deal is done, my info is that’s not the case: all main points have been agreed, but pens have not been put to paper pending financial guarantees. Kyalami is on ice until after next week’s national elections, so I should know more by the Spanish Grand Prix, whose contract expires this year. I’m told the latter’s renewal prospects are not looking good… 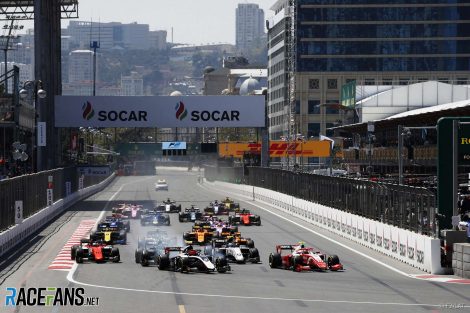 I watch an incident-packed F2 race over lunch: turkey breast sandwiches with lettuce and lemon mayo, followed by mousse. Still, I can’t resist a walk down to the far end of the paddock to cadge a Magnum at Williams.

I’m delighted for the team that its third driver and tester Nicholas Latifi wins the carnage-filled F2 race to extend his championship points lead – some good news for the beleaguered team on an otherwise horrible weekend.

Start readying for the race. Hear rumours about an Alfa Romeo disqualification over technical breach, so await news. Eventually it filters through: Kimi Raikkonen’s car is in breach of wing deflection regulations, meaning he joins Robert Kubica and Pierre Gasly in starting from the pit lane.

Hit the grid – may favourite part of the weekend. I am incredibly privileged to be a part – albeit a very small one – of this sport. 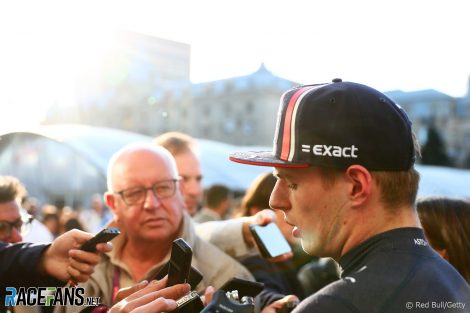 Interview trail, first in the so-called ‘mix zone’, where all drivers pass through post-race: Max Verstappen is extremely good value as he talks us through his race, and Raikkonen is more talkative than usual having salvaged a point from the pits. Then it’s team boss time: Toto Wolff and Christian Horner.

Wolff reckons, with some justification, that chaotic F2 races tend to instil caution in F1 drivers, and hence Sunday’s sleeper of race without even a full Safety Car intervention.

The Mercedes pair are next up: Hamilton is clearly unhappy at having been beaten by his team-mate, but accepts that he wins some and loses some. Bottas, though, has this air of man who knows he delivered of his best today, and is quietly savouring his title lead, however slender.

Ferrari group interview, although Sebastian Vettel is absent after flying out post-race, leaving Charles Leclerc and Mattia Binotto to face the media. I’m impressed with the way Leclerc handles questions about his qualifying misjudgement, which probably cost him pole, and arguably the victory.

Head for hotel, with suitcase. My flight out is at 3:30pm Monday, so I’ll have time to catch up on race stuff before heading for my original home country and an FIA Conference that is sure to prove most enlightening. Will keep you posted from there. Take care until Spain.