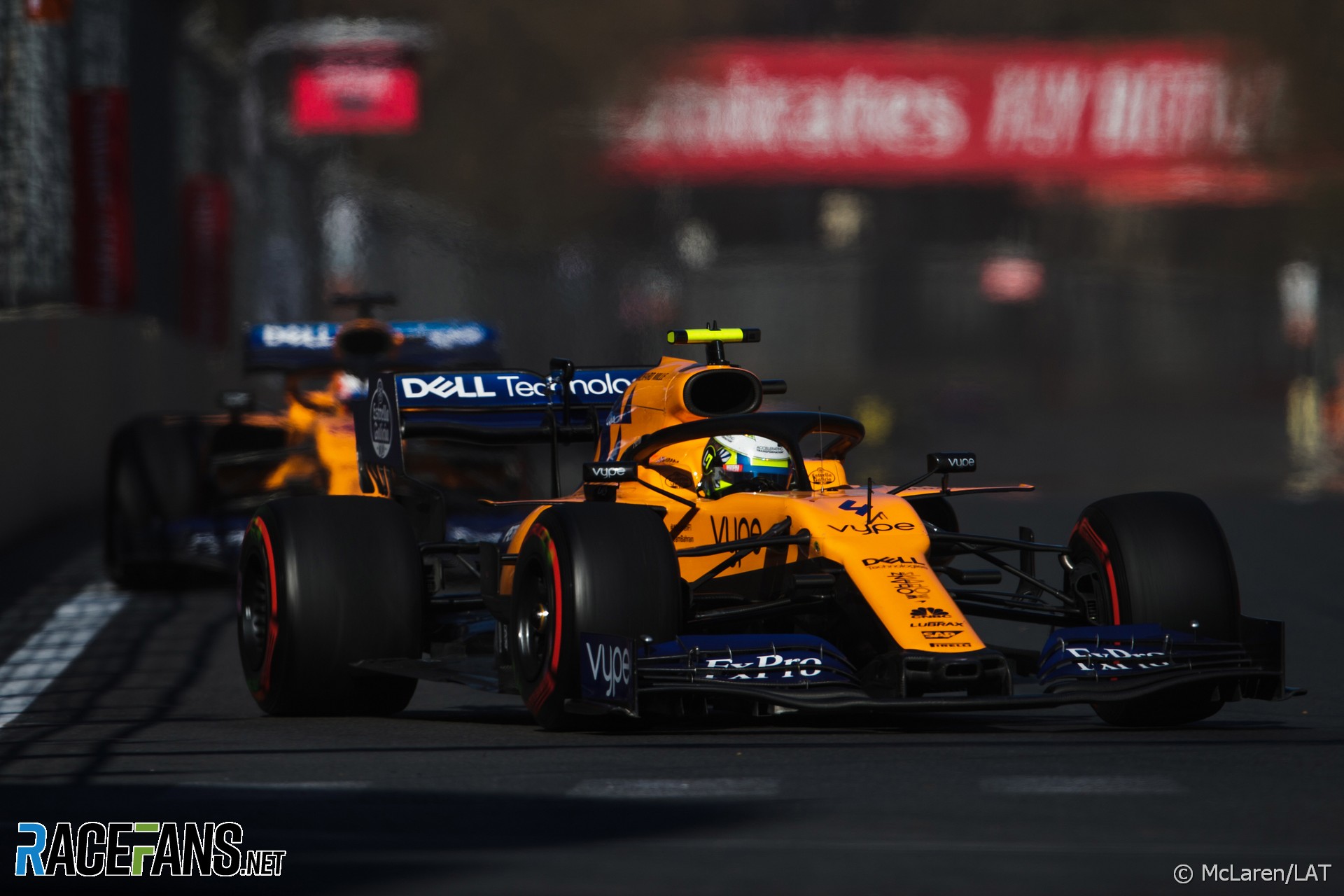 Lando Norris supports McLaren’s decision to give him an extra pit stop during the Azerbaijan Grand Prix, even though it cost him a place to his team mate.

Norris was running behind Sergio Perez when he pitted for the second time during the Virtual Safety Car period. The pit stop dropped him behind Carlos Sainz Jnr, and while the team hoped switching to a set of used soft tyres for the final 12 laps would help him catch and pass Sainz and Perez, Norris was unable to make any progress.

Despite forfeiting a position and two points to his team mate, Norris said he was “happy” with his team’s tactics.

“As a team we didn’t win or lose points from where we were before I stopped. We just wanted something to see if we could have a bigger advantage over Checo [Perez] to get ahead because we didn’t have the straight-line speed to pass him.

“We just tried something a bit different. And it wasn’t a win or a loss in the end, we just swapped positions, basically. So I’m happy with a seventh and eighth, it’s good points for the team.”

McLaren told Norris “we’d like to box to overtake” on the radio as he approached the pit lane entrance during the VSC period.

“It was a ‘box to overtake’ so if he boxed, I wouldn’t have boxed; if he didn’t box I boxed,” Norris explained. “I could’ve easily said ‘no I don’t think you’re right’ or ‘I want to stay out’ or whatever. It was just a chance to do something different, to do something a little bit better.

“I believed in their decision, I agreed with it, I boxed, I could’ve easily not boxed. So I’m fine with the decision, it was a team decision, it just didn’t work out the way I wanted it to.”

Norris said he was preparing to attempt an overtake on Perez when the VSC period began and believes he could have passed the Racing Point without the interruption.

“His tyres started going off a bit towards the end, just before the VSC,” he said. “My pace at that point was quite a bit better.

“I had a few opportunities but those last couple of laps before the VSC came out I was saving that battery, trying to make him use it as much as possible so I could make the most of him recharging on the final start-finish straight, as that was my only opportunity to try and pass.”