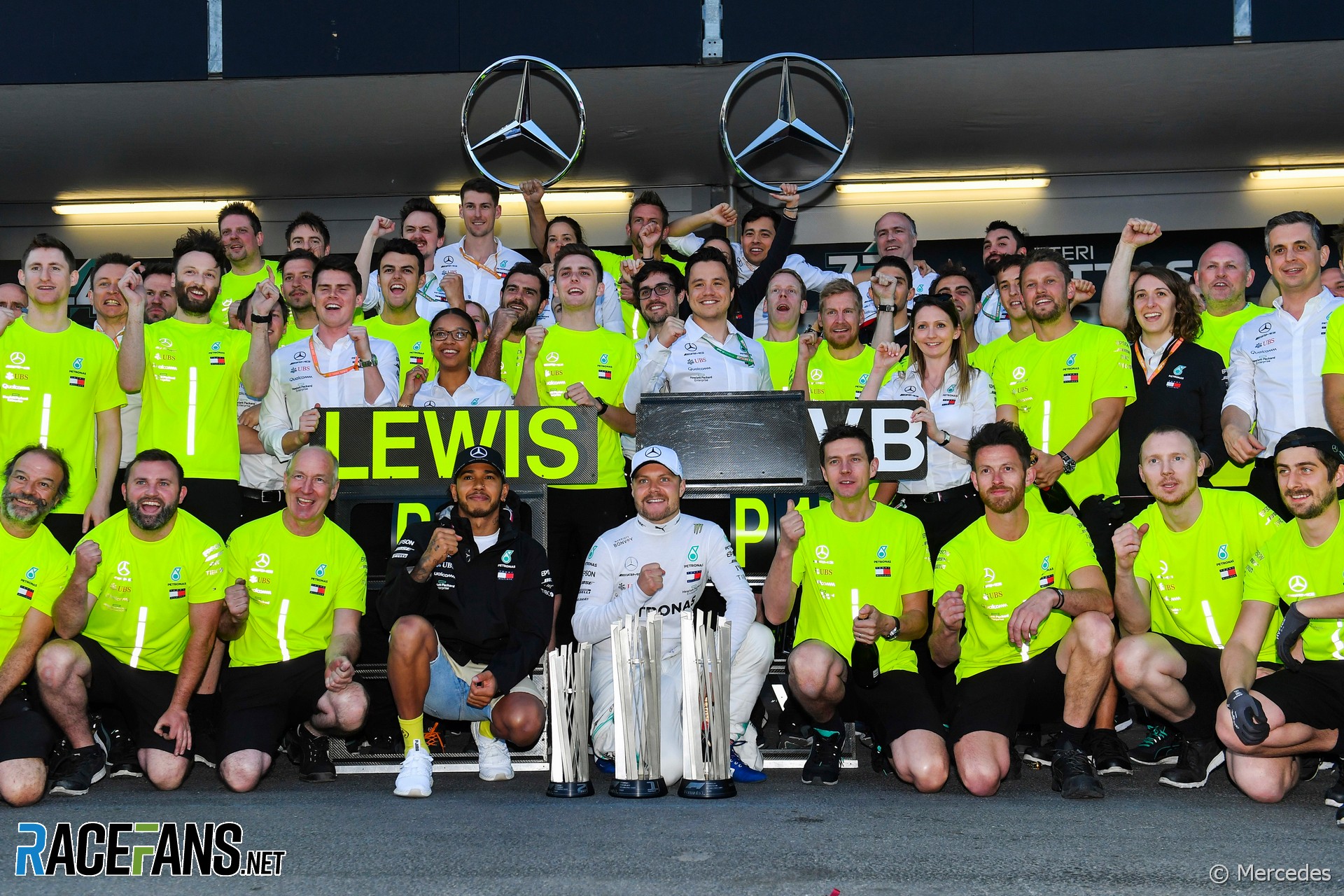 Mercedes achieved a first by scoring their fourth consecutive one-two finish of the 2019 F1 season so far in the Azerbaijan Grand Prix.

No team had ever previously finished first and second the first four races of a world championship season.

Ferrari can lay claim to a comparable achievement, though not with F1 equipment, as it occured in the 1952 season which was run to F2 rules. In the first seven races of that season they scored seven one-twos. The only exception was round two, the Indianapolis 500. They only sent a single car to this race, which was run to a different set of rules to the rest of the season.

With his fifth career victory, Valtteri Bottas now has as many wins as Max Verstappen, as well as Giuseppe Farina, Clay Regazzoni, John Watson, Michele Alboreto and Keke Rosberg. He sustained Baku’s record of producing different winners: He, Lewis Hamilton, Nico Rosberg and Daniel Ricciardo have won the four races held at this track so far. Despite being one-two in all three practice sessions (including first practice, where theirs were the only cars to set times), Ferrari remain win-less in Baku.

This is the first time the Azerbaijan Grand Prix has been won from pole position. When Rosberg won Baku’s inaugural race from pole in 2016, the race was called the European Grand Prix.

It’s been 26 years since F1 had a run of eight races with no repeat winners. The longest run of consecutive different winners ever seen in F1 is nine, which happened in 1982 and from 1961-62.

This was the 177th win for a Mercedes-powered car. The three-pointed star now has powered more wins than Ford-Cosworth, and is the second most successful F1 engine behind Ferrari, with 236 wins.

Mercedes has taken 91 of those wins with its own cars, the rest with McLaren (78) and Brawn (eight). All bar one of Ferrari’s wins were scored by the factory: The only exception is Sebastian Vettel’s 2008 Italian Grand Prix victory for Toro Rosso.

Curiously, both Alfa Romeo drivers reached Q3 despite getting slower in each phase of qualifying:

Every other driver which reached Q3 – apart from Charles Leclerc, who crashed in Q2 – got faster in each round.

McLaren scored their first two-car points finish of 2019, putting them on a total of 18. They hold fourth in the championship, which is the same as they had at this stage last year, albeit with half as many points.

Racing Point also got both cars home in the top 10, the first time the rebranded team has done so. While Lance Stroll dropped out in Q1 for the fourth time in as many races this year, he also sustained his 100% record of scoring points in Baku.

Have you spotted any other interesting stats and facts from the Azerbaijan Grand Prix? Share them in the comments.