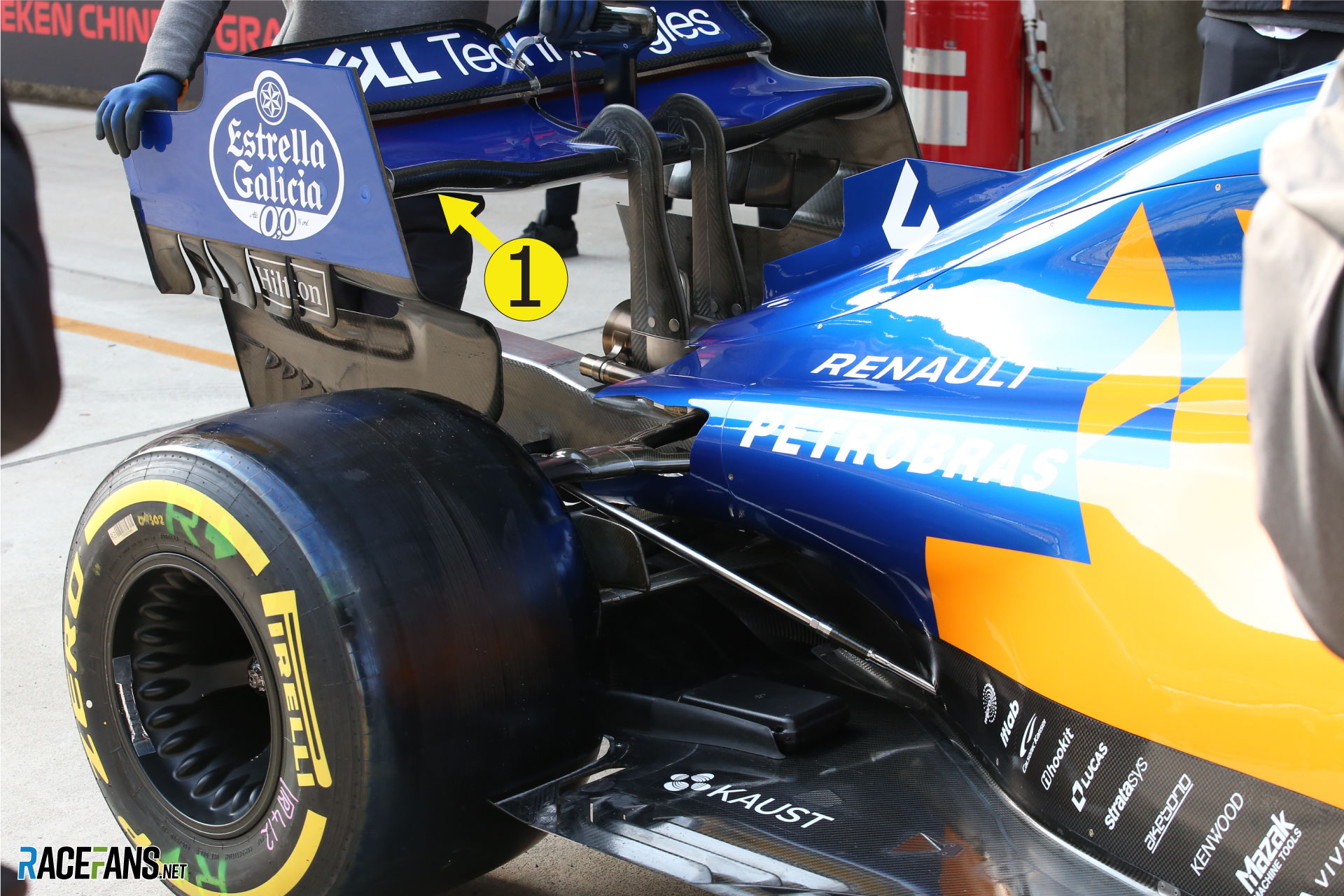 With F1’s arrival for Race 1000 in China, the layout of the circuit will have been a bigger focus for the team’s technical staff. Shanghai is a very different track to the first two races, it has a very long straight, fast corners and sector1 places an emphasis on low speed front end grip. Along with variable weather from hot to thunderously wet, there are a range compromises that teams need to make to get the best lap time and race performance.

As the long straight dominates the track low drag is important, but too little downforce will cost time in the corners, teams with more power will benefit from being able to trade a higher top speed for more downforce, which in turn should aid tyre use as the tread will slide less through the slow sector 1.

The story revolving around the Mercedes front wing endplate developed throughout the weekend. The revised endplate was first seen on Thursday and by Friday Mercedes had been requested to modify the part as result of a technical directive issued earlier in the month.

As the Mercedes new endplate cut-out (1) exposed the wing tip (2), this edge caused the FIA’s concern about the potential for puncturing tyres. Thus, a request was made to radius the shape wing tip where its exposed by the open endplate. Mercedes duly made a rounded add-on piece (3) to the endplate to cover the sharp wing tip and ran this version of the through qualifying and the race.

Oddly, a team without notable aero developments. Ferrari said its power unit problems in Bahrain was thought to be a short circuit in the control unit for the direct injection system, but other reliability concerns have since been directed at the Control Electronics (CE), where both Ferrari and Haas’s CEs were changed.

‘Control electronics’ is a broad term for the high voltage electronic units that control the ERS-K, ERS-H and the cars DC power supply. The FIA press release was not specific as to which unit was changed, so it’s down to speculation if the Leclerc Bahrain problem was actually ERS related or if Ferrari have a problem with the power supply to the injection system, that lead to the cylinder cutting in the race.

It might also be considered if Ferrari ERS control strategy that appears to be bringing the team so much straight line speed is stressing the electronics. Other teams believe Ferrari are able to run the MGU-K all the way along the straight without clipping. Taking power from the MGU-H harvesting at full throttle, a lot of energy would have to pass through the CE and the heat created might be the reason for premature replacement of these parts.

Red Bull made a clear step forward compared to Mercedes and Ferrari in Bahrain. We covered their progress and updates here:

There were braking and suspension updates to the Renault chassis, while Renault rolled out a new MGU-K in response to the problems it encountered earlier in the season.

Part of the visible updates were new front brake ducts, this is an area where teams have found a loop hole to exploit the supposedly simpler brake duct rules for 2019. As the rules only define the simpler surfaces from 5mm outboard of the wheel rim, anything closer than 5mm to the wheel is free for openings and shaping. Most teams seized on this area straightaway, Renault did so a few races later, but with similar thinking. The inner face of the brake duct now has a fin and an opening, which will help with airflow around the front tyre and creating outwash by pushing more airflow through the wheel.

On the power unit side, Renault have had a weakness in the MGU-K for many seasons and it’s taken a long time to resolve the problems to gain the same efficiency and reliability as its rivals with this key part of the hybrid systems. All the MGU-Ks have been replaced this weekend. While Hulkenberg’s failure in Bahrain was within the V6 engine and he had to change the engine (ICE), turbo and MGU-H in addition to the MGU-K.

Detail changes abounded on the Haas including a lower drag rear wing and revised diffuser. Unfortunately some strengthening of the front wing was also required.

Both the rear wing and diffuser are part of the usual in season development, the rear wing being curved upwards in the middle to reduce drag, while the diffuser follows the more common Red Bull format with the flaps and fins around the outer corners.

Grosjean’s front wing failure in practice was a concern. There was no indication a ‘kerb-strike’ caused the failure; instead it appears to have collapsed after the car rode over the bumps along Shanghai’s straight.

The failure was at the intersection of the central neutral section and the outer wing profile. This is a highly loaded joint, where a machined aluminium joiner is bonded to the hollow carbon fibre wing profiles. Haas strengthened the joint with overlays of extra carbon fibre and continued the weekend with the reinforced wing.

Aside from engine and gearbox reliability issues the only MCL34 update appeared to be a low-drag rear wing. The new stepped profile (1) shallows the angle of attack of the wing profiles near the endplate to reduce the wing tip vortices formed at the wing tip. These tip vortices induce drag, so while the wing produces less downforce, its more efficient as it loses even more drag.

Despite starting late with its full 2019 aero package, China saw the team arrive with a third floor iteration. This was not a completely new floor, but the floor edges featured a new section bonded in with more longitudinal slots.

There are now three aerofoil sections (1,2,3) formed in the long edge of the floor ahead of the rear tyres. These slots take the air flow passing outwards over the floor and direct it outwards to help power the vortices flowing outboard of the floor edge.

This isn’t the ‘floor-sealing trick’ that many believe to be the aim of the floor slots, but instead create outwash to push the front tyre awake away from the coke bottle area. The airflow is direction is aided by the aluminium slot supports and smaller fins ahead of the rear tyre.

Other than drag-reducing rear wing set-up there were not any changes evident to the C38. The team did not use the new control electronics from engine supplier Ferrari and consequently suffered a failure on Antonio Giovinazzi’s car during qualifying which was similar in nature to Charles Leclerc’s problem in Bahrain.

As with most teams the STR14 arrived with low drag rear wing options, there being a curved profile wing to reduce the drag created by the wing tips.

This was also the first race where a Honda engine was replaced prematurely. Kvyat’s power unit showed anomalies in the data after first practice, thus the V6 IC engine, turbo, MGU-K and MGU-H were changed.

Alexander Albon also had to take a new power unit after his huge crash on Saturday. His and Kvyat’s units were sent back to Honda’s Sakura base for inspection.

Baby steps of progress are being made by Williams after a successful Bahrain test. There remains concern about the performance differences between the only two monocoques available for the two drivers. Plus, the car’s use of its tyres mystifies the drivers where the tyres lack temperature and therefore grip, but then overheat continuing to lack grip.

Along with changes in set up direction and small aero change was made to the FW42. The front wing endplate cut out was reshaped slightly. The previously rounded cut-out is now squarer-edged (1), not a huge change, but this will some effect on the outwash effect formed at the endplate.