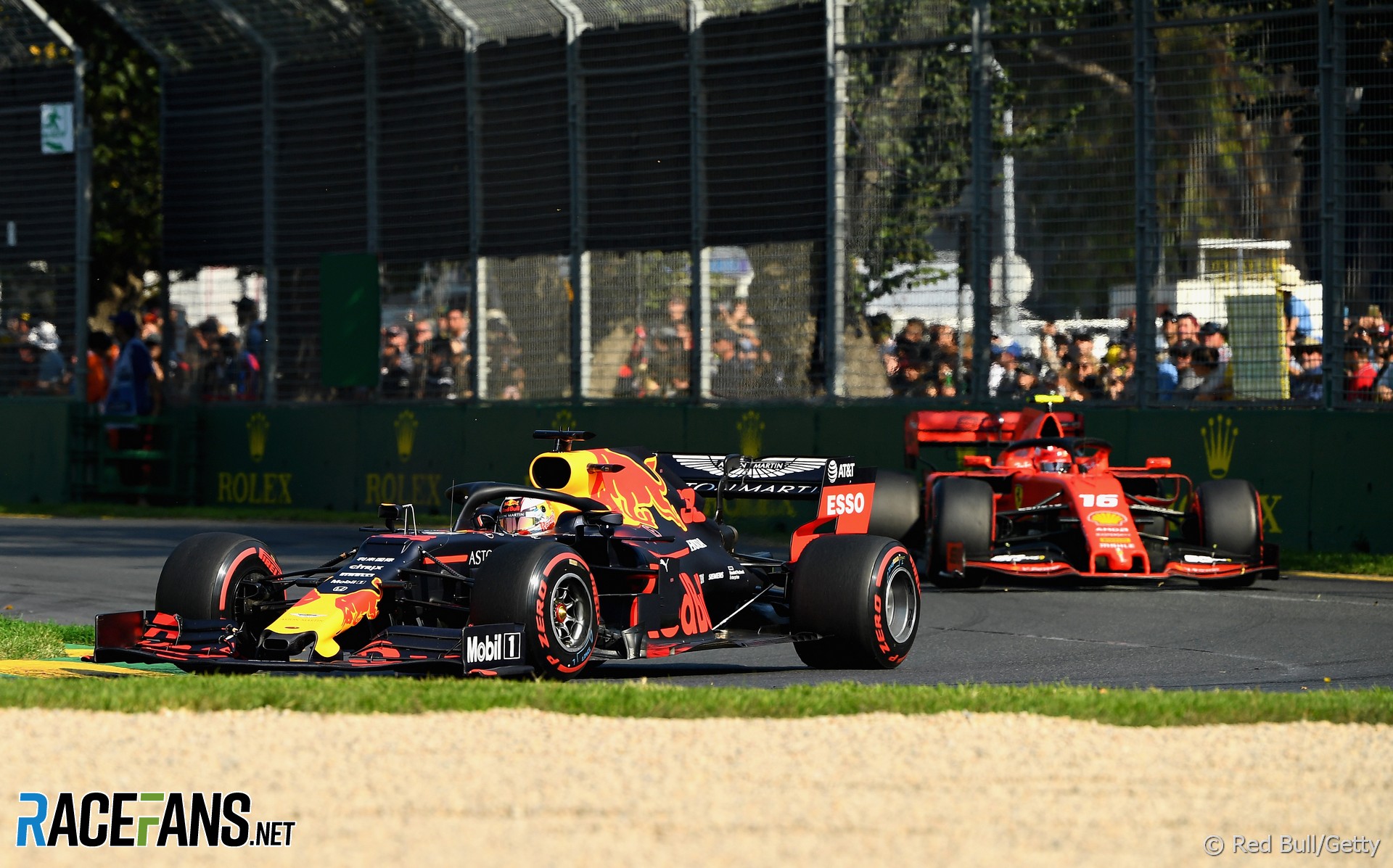 A great Q3 lap allowed Verstappen to split the Ferraris and start alongside Vettel on the second row. He couldn’t get by the Ferrari into turn one, but stayed glued to his gearbox for the rest of the first stint.

Red Bull let Verstappen run long after Vettel pitted and he emerged from his eventual stop three seconds behind the Ferrari. Thanks to fresher tyres Verstappen was able to sweep around the outside into turn three and take the final podium place.

He even got within range of Hamilton’s Mercedes at one stage, though never looked likely to make a pass. Even so it was a very encouraging first race for Red Bull-Honda.

Stroll’s Racing Point debut began with disappointment when he was held up by Grosjean in Q1 and missed the watched his team mate advance to Q3. Stroll started 16th and he quickly began working on his recovery as he gained three places on the opening lap.

He started on the medium tyre which allowed him to run until lap 27 when he stopped for softs. He was running sixth when he stopped and emerged from pit lane in 10th. On fresher and softer rubber he was able to gain one more place before the chequered flag, finishing ninth.

Bottas was mistake-free when it mattered and was on provisional pole until Lewis Hamilton nabbed it from him in the dying moments of qualifying.

A superb start proved the making of his race. Bottas edged Hamilton aside before they reached turn one. He had already opened a nearly two second gap by the time DRS was enabled.

For the rest of the first stint his lead continued to grow. He stayed out until lap 23, which was longer than every other front runner except Max Verstappen. Bottas came out 11 seconds ahead of Hamilton and extended his gap even more on fresher mediums.

In the final laps of the race Bottas found some clean air between the backmarkers and claimed the point for fastest lap from Verstappen on his way to the top step of the podium and a perfect 26-point haul.

Heading into the weekend Williams knew their drivers would be at the back of the grid, but Kubica found himself even further behind his team mate. He hit the wall in practice and again in qualifying, which explained the 1.7-second gap between him and Russell.

His predicament only worsened in the race. Kubica hit Gasly and damaged his front wing at turn one and was forced to stop on the first lap. Wrestling with other damage, he pitted twice more before the end of the race and finished three laps down.

Pierre Gasly’s first run in qualifying wasn’t as quick as team mate Verstappen’s but his team thought it was good enough. However the rapid track evolution at the end of Q1 was unexpected and Gasly was eliminated while he sat in the garage.

In the race, he opted for a long first stint on mediums and then came in for softs. This jumped him ahead of Daniil Kvyat, who had just skidded off, but Gasly was unable to defend his position on cold tyres into turn three. For the rest of the race Gasly tried to find a way through to break into the points, but Kyvat defended superbly.

Ricciardo was keen to impress but he was in for a rough weekend that began when he was out-qualified by Hulkenberg by eight thousandths of a second.

Ricciardo’s race was effectively over before he even reached turn one in an accident which saw his front wing ripped off when he put one wheel off track. There was significant damage to the left side of the car and Renault opted to retire the car on lap 28.

Hamilton appeared ready to continue his dominance in 2019 after topping every practice session and taking pole position. His start in the race wasn’t bad, but it wasn’t good enough to maintain the lead and he never had another opportunity to win the race.

He struggled with balance throughout the race thanks to damage on the left-rear side of the floor which was his reasoning for his lack of pace.

Ferrari struggled with pace throughout the weekend. Sebastian Vettel was just able to hold off Verstappen in the first stint but on slightly fresher tyres the Red Bull driver sailed past as Vettel struggled with degradation. Eventually he was caught by new team mate Charles Leclerc who was ordered to stay behind in order to secure the four-five finish for the Scuderia.

Haas were clearly best of the rest, qualifying sixth and seventh on Saturday. Magnussen got by Grosjean into turn one and spent the rest of the race alone between the rest of the midfield and the front runners.

Grosjean’s race didn’t go as smoothly thanks to a problem with the front left in the pits, sending him down the pecking order. He retired 14 laps after the stop with an issue with his front left suspension.

Lando Norris proved that McLaren was capable of making Q3 with a stellar starting position of eighth, but Sainz was eliminated in Q1. Sainz then had a problem with the MGU-K which forced him to retire on lap 11. Norris suffered from a poor start and got caught in traffic following his pit stop which left him incapable of returning to the top ten.

Kimi Raikkonen was the quicker Alfa Romeo driver all weekend, qualifying ninth and finishing eighth in a fairly uneventful weekend. Giovinazzi went out in Q2 and tried an alternate strategy in the race that saw him form a train in the midfield.

Sergio Perez impressed in qualifying, relative to his team mate, but his race was sub-par and he finished 13th after struggling with traffic.

Kvyat was busy all race which saw him, take a trip through the gravel and then hold off Gasly in the Red Bull on his way to his first point of the season. Alexander Albon out qualified his team mate after a scruffy day of practice but finished well outside the points in 14th

In an ill-handling car, George Russell stayed out of trouble but never had anyone to race apart from his team mate, who he beat comfortably.