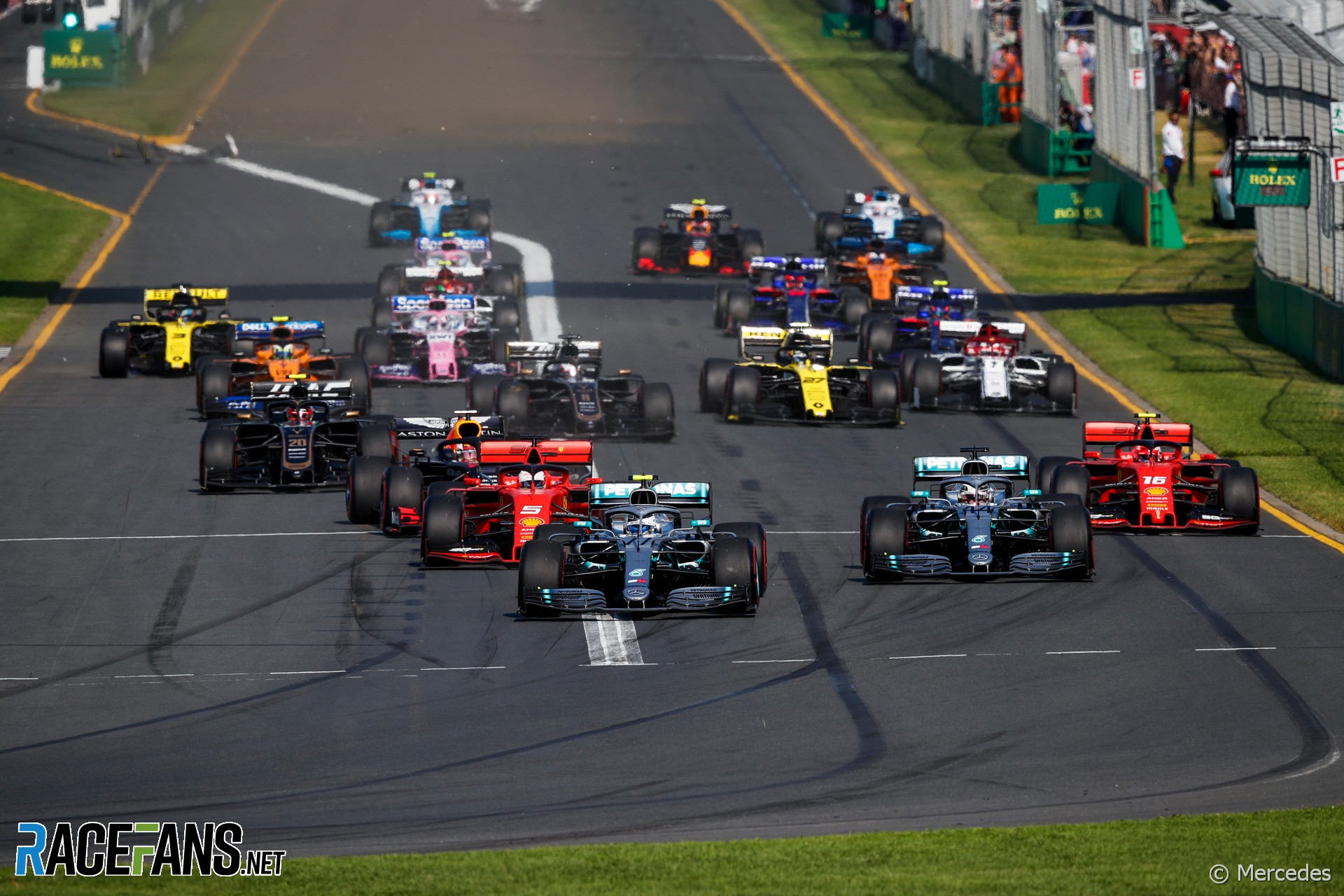 The 2019 Australian Grand Prix witnessed the unleashing of a potent new force in F1.

A revived, revitalised ‘Valtteri Bottas 2.0′ emerged from the off-season armed with a devastating turn of speed and a new, ruthless and uncompromising streak.

Alternatively, Lewis Hamilton fluffed his start, then dropped out of contention due to a broken floor and a (potentially unnecessarily) early pit stop to keep the Ferraris behind.

Where between these two extremes does the truth of the season-opening race of the 2019 F1 season lie?

Hamilton had been the quicker of the two Mercedes drivers throughout practice and into qualifying. A scruffy first lap in Q3 left him on the back foot but he hit back in style, stringing his three best sectors together on his final lap. Bottas didn’t manage to do the same, but even if he had he would have been a few thousandths shy of the champion.

No matter. From second on the grid Bottas had a clean run down the inside of the other Mercedes heading into turn one. This was the path Jenson Button and Nico Rosberg had previously taken at Albert Park to deprive Hamilton of his pole position advantage when he was their team mate (in 2012 and 2016 respectively). When the lights went out, Bottas followed it.

It might not have been as good a start as the incomprehensibly fast getaway which won him the 2017 Austrian Grand Prix, but it was more than good enough to give him the upper hand at a track where passing is never easy.

Hamilton kept his team mate in sight at first, but began to drop back after lap four. From the 10th tour he held the deficit steady at just under four seconds. But he wasn’t happy with his balance. “Struggling with the rears,” he reported on the radio.

Mercedes later discovered Hamilton’s car had sustained damaged to its floor just in front of the left-rear tyre. It seems the damage coincided with Hamilton’s loss of pace at this point. But he was quick enough to eke out a near-four-second lead over Sebastian Vettel.

Mercedes shadow Ferrari in the pits

This proved valuable as the cars behind them began pitting sooner than expected. Kimi Raikkonen came in on lap 12, which kept him on course for a single stop, though it was prompted by his left-rear brake duct ingesting a tear-off – possibly his own – and starting to overheat.

This triggered the domino effect of drivers around him heading in. Sergio Perez and Nico Hulkenberg came in on the next lap. The Renault driver had been chasing the Haas pair, who were obviously going to pit in reaction, which in turn meant Vettel’s Ferrari was about to get a clear gap to pit into.

Sure enough Vettel and Magnussen hit the pit lane the next time around, the Ferrari driver calling for one turn less of front wing angle as he switched from the soft C4 tyres to the medium C3s.

Mercedes, who lost last year’s Australian Grand Prix because they miscalculated the pit stop gap they needed under Safety Car conditions to Vettel, seemed anxious to avoid another tactical blunder at the same track. They played it safe with Hamilton, bringing him in straight away despite his margin to Vettel, unwilling to risk a fast out-lap by the Ferrari leaving them vulnerable to the undercut.

But Ferrari had been struggling all weekend with the chassis which set the pace in pre-season testing. Vettel’s out-lap was nothing special – just three-tenths quicker than Bottas was going in his undamaged car – and Hamilton easily kept his position ahead of the Ferrari when he pitted the next time around. But he was conscious of the early pit stop’s likely effect on his strategy.

“What’s the reason you stopped me so early?” he asked on the radio. “To cover Vettel,” answered race engineer Pete Bonnington.

Soon afterwards Hamilton expressed doubts about his strategy. “I don’t think I’m going to make it to the end of the race on this tyre,” he remarked, adding later: “I’ve got no rear end.”

Speaking afterwards, Vettel rubbished the idea Hamilton had been in any kind of trouble. “I was told also on the radio that he’s complaining about his tyres but I think he made it quite safely to the end,” he pointed out. Clearly, Hamilton was much quicker over the long stint than Vettel, whose best lap time was almost two seconds slower than his rival’s.

In the closing stages of the race Hamilton’s tyres were in good enough shape for him to make a bid of the new fastest lap bonus point and within half a second of Bottas’s quickest lap. Verstappen and Charles Leclerc had a go too but must have known it was an exercise in futility given Bottas’s pace, position and tyre age.

Mercedes team principal Toto Wolff said he forbade his drivers and his engineers from trying to bag the point for fastest lap if they were running in the top three positions. Was a solemn edict or a cheerful, ‘none-of-that-you-scamps’ finger-wag? It’s hard to imagine the team which took the unsentimental decision to order Bottas aside so Hamilton could win in Sochi last year to leave a point on the table.

Bottas, bristling with a sense of purpose, not to mention that new beard, made his stance clear: “I want 26 points.” He got them.

Ferrari might have beaten Mercedes to the bonus, but the thinking on their pit wall seemed even more muddled. Vettel’s dire lack of pace opened the door for Max Verstappen, with inevitable consequences: Vettel dropped out of the podium places.

Soon his new team mate Leclerc, whose tyres were 14 laps fresher, was zeroing in at around a second per lap. Before the season began Ferrari had given mixed messages about how such scenarios might be handled. New team principal Mattia Binotto said Vettel would be favoured in “ambiguous scenarios” but the pair were “free to fight”.

Leclerc, showing an apparent willingness to sign up to the role of ‘number two’, took the surprising step of asking his team whether he was allowed to pass Vettel as he closed in. The response was inevitable: “Back off to have some margin.” He did as he was bidden.

A subtler solution to this problem was available to Ferrari. They could have pulled Leclerc in for a pit stop, put him on fresh tyres, and tried to bag the point for fastest lap, as Leclerc suggested earlier in the week they would.

According to Binotto they didn’t because to do so because it was too great a “risk”. That may be so, but you have to wonder whether Ferrari actually could have beaten Mercedes to the fastest lap even with a newer set of tyres. Leclerc made a last-lap bid for fastest lap on tyres which were five laps younger than Bottas had end, yet ended up 1.3 seconds slower.

So against expectations, neither car from the fastest team in pre-season testing appeared on the podium. Verstappen, who wielded his new Honda power unit to impressive effect by passing Vettel, gave Red Bull’s new partner their first podium for more than a decade. Leclerc dutifully followed Ferrari home.

“If you look at my record here it’s terrible,” Romain Grosjean admitted before the race.

In 2019 it got no better. From sixth on the grid he fell behind Kevin Magnussen at the start, meaning he was the second Haas to pit. While Magnussen’s stop went smoothly, Grosjean’s brought back memories of 12 months ago. He was detained in the pits a long time, and once he returned to the track he eventually retired with an associated problem.

Magnussen therefore led the midfield home, impressively still on the lead lap and within half a minute of the Ferraris, their problems notwithstanding. They key to his ‘best-of-the-rest’ victory lay in the speed with which he dispatched Antonio Giovinazzi after coming out of the pits behind the Alfa Romeo driver.

Encouragingly for the state of the competition in the midfield, the top 10 was filled by representatives of eight different teams. They included Hulkenberg, who also managed to pass Giovinazzi, and Raikkonen, who was waved through.

After his misfortune in qualifying, where he was badly held up by Grosjean, Lance Stroll started on the harder tyres. He ran until lap 27 before pitting in reaction to Daniil Kvyat behind doing the same, and both came out ahead of Giovinazzi. That put the duo on course of the final points places.

Kvyat nearly squandered his chance when he went off at turn three, ploughing through the gravel. Up ahead Pierre Gasly, who ran the longest opening stint of all having started 17th, seized his opportunity to pit and come out ahead of Kvyat. But heading into turn three for the first time, his tyres not fully heated (Pirelli has reduced the maximum temperatures for tyre blankets this year), Gasly was forced to cede position to the Toro Rosso.

Gasly wasn’t the only driver who will want to put his first race with a new team behind him quickly. Daniel Ricciardo’s first race for Renault was wrecked along with his front wing when he put a couple of wheels off-track on the run to turn one.

Giovinazzi served Raikkonen’s race well but after staying out for lap after lap on worn tyres he ended up 15th. Behind him were the two Williams drivers, who collected few scrapbook mementoes from their first weekend in the evil-handling FW42. That especially goes for Robert Kubica, who had waited eight years to race an F1 car again, but after a series of collisions found his car handling so poorly he was almost moved to laughter.

It was no exaggeration for Bottas to describe his win as “the best race I’ve had in my life”, even if that 20-second victory over Hamilton owed more to circumstance than him suddenly untapping new reserves of speed.

But his winter programme of relaxation and rallying has clearly both agreed with him and had practical value. Before the races Bottas described how his rally debut in the Arctic Lapland event helped him to stay sharp.

“For me it was great training as well because over two days the rally last you need to concentrate, you can’t do any mistakes if you want to finish,” he said. “That’s something normally that’s difficult to train and you might end up doing mistakes in winter testing or the first races if you haven’t been driving much.”

A few dozen extra practice at starting into the red glow of a start light, poised to pounce can’t have hurt either. Because in the final reckoning, it was the start that won him the race.

So you have to wonder whether, in between growing his beard and driving his rally car, how much of the off-season Bottas spent reflecting on how Hamilton’s last team mate beat him to the championship.