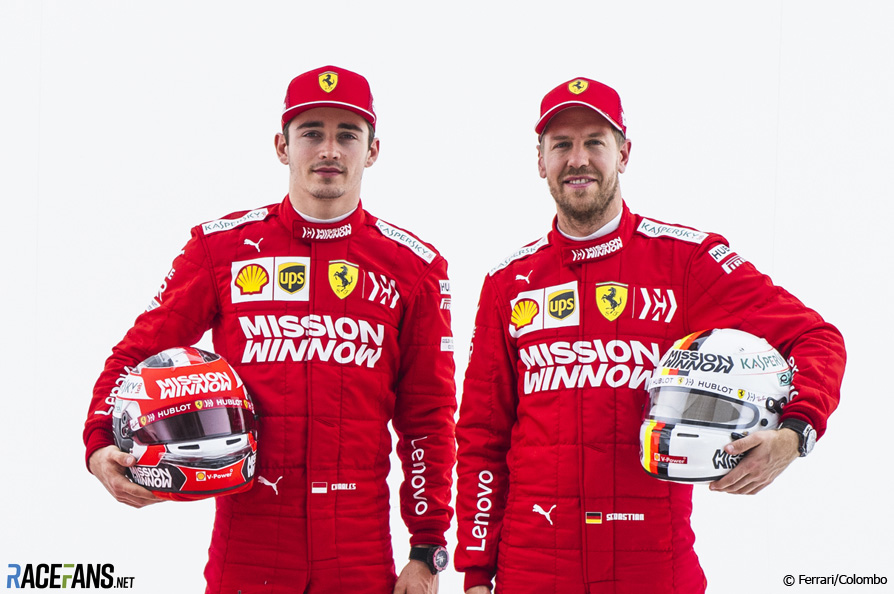 More than three-quarters of the drivers on the grid for the 2019 F1 season have a new team mate for this year. But all of them know their first goal is to beat the only other guy in the same car.

Who will come out on top at each team? Cast your vote and have your say below.

After two years as Lewis Hamilton’s team mate Valtteri Bottas may be beginning to understand why Nico Rosberg scarpered after pipping Hamilton to the 2016 title. Bottas hasn’t been able to consistently operate at Hamilton’s level and tends to fade in the second half of seasons. It didn’t help matters last year that the peak of his form coincided with a bout of misfortune which left him trailing his team mate when it came to crunch time in the championship.

The pressure to perform is unrelenting at the sharp end of the grid. Mercedes faced their strongest challenge yet from Ferrari last year and the team need Bottas at the top of his game if they are to win a sixth consecutive world championship. And now there’s the threat of reserve driver Esteban Ocon waiting in the wings, eyeing a shot at a 2020 race seat.

Which Mercedes driver will finish ahead in the 2019 championship?

Of course Charles Leclerc will find Sebastian Vettel a much tougher team mate than Marcus Ericsson, who he dominated last year. But there are well-placed figures within F1 who believe the four-times champion could get a nasty surprise from his new team mate in 2019.

Which Ferrari driver will finish ahead in the championship?

Max Verstappen is considered by many to be the favoured son at Red Bull, a perception which was only increased by Daniel Ricciardo’s departure from the team last year. Pierre Gasly now has the unenviable task of going up against one of F1’s brightest talents, whose one-lap pace is formidable and whose attitude towards his team mates is utterly uncompromising. Gasly gave as good as he got against Hartley last year, however. Expect fireworks.

Which Red Bull driver will finish ahead in the championship?

An intriguing line-up. Nico Hulkenberg has been regularly touted as the midfield driver most deserving of a top-line seat, but the shine came off his reputation when Sergio Perez got the better of him at Force India. Race winner Ricciardo will surely prove his toughest team mate since then. As F1’s tallest driver, Hulkenberg stands to benefit from new rules stipulating a minimum driver weight for 2019.

Which Renault driver will finish ahead in the championship?

Aside from Mercedes, the only team to have retained the same two drivers for its 2019 campaign. Last year Kevin Magnussen turned the tables on Romain Grosjean, out-scoring the driver who had beaten him the year before. Grosjean was clearly capable of out-pacing his team mate, but threw too many points away with needless mistakes, a trait he has struggled to get a handle on during his career.

Which Haas driver will finish ahead in the championship?

It’s all change at McLaren this year: Carlos Sainz Jnr starts 2019 at his third different team in as many seasons, while Lando Norris makes the step up from F2. It says a lot about how successful the latter’s junior career was that second in his rookie F2 season was something of a disappointment.

Which McLaren driver will finish ahead in the championship?

Perez would be forgiven for feeling relieved to see Ocon lose his seat to Lance Stroll, as it was clear last year Perez was struggling to stay on terms with his team mate in qualifying. Stroll remains something of an unknown quantity: rushed into F1 after winning the European F3 title, he was unsurprisingly thrashed by the experienced Felipe Massa, but last year’s travails alongside rookie Sergey Sirotkin in the hopeless Williams FW41 taught us next to nothing about him.

Which Force India driver will finish ahead in the championship?

In his first full season of F1, Antonio Giovinazzi faces a tough benchmark in the shape of 2007 world champion Kimi Raikkonen. He will have to show the kind of performance Grosjean exhibited while Raikkonen’s team mate in the second half of 2013 to justify his place in F1.

Which Sauber driver will finish ahead in the championship?

The revolving door of driver appointments spins fastest at Toro Rosso. In this case they are welcoming two returnees. The first, Daniil Kvyat, has already been relegated first by Red Bull and then by Toro Rosso, only to be rehired after a stint in Ferrari’s simulator last year. Alexander Albon, meanwhile, is a former Red Bull Junior Team member welcomed back into the fold and hoping to do better than Brendon Hartley, who returned to the team under similar circumstances in 2017.

Which Toro Rosso driver will finish ahead in the championship?

Can Robert Kubica can still compete at anything like the level he was at before the horrible crash which halted his F1 career in 2011? If so he’ll have to conclusively beat his rookie team mate. Big things are expected of George Russell after his exemplary performance in F2 last year, but much the same was true of Stoffel Vandoorne and he’s a Formula E driver now.

Which Williams driver will finish ahead in the championship?

A RaceFans account is required in order to vote. If you do not have one, register an account here or read more about registering here. When these polls are closed the result will be displayed instead of the voting form.

How your 2018 predictions turned out

Last year four drivers were overwhelmingly chosen by RaceFans readers as the most likely to beat their team mates. And those predictions came true for Vettel (chosen by 95% of readers), Hamilton (91%), Fernando Alonso (88%) and Leclerc (88%). Readers were less sure about Gasly (59%), Verstappen (58%) and Hulkenberg (53%), but all three did end up beating their team mates.

Three drivers failed to live up to expectations, however. They were led by Grosjean, whom 72% tipped to beat Magnussen. Ocon was chosen by 71% but was out-scored by Perez, and Sirotkin let down the 70% who selected him by failing to beat Stroll.