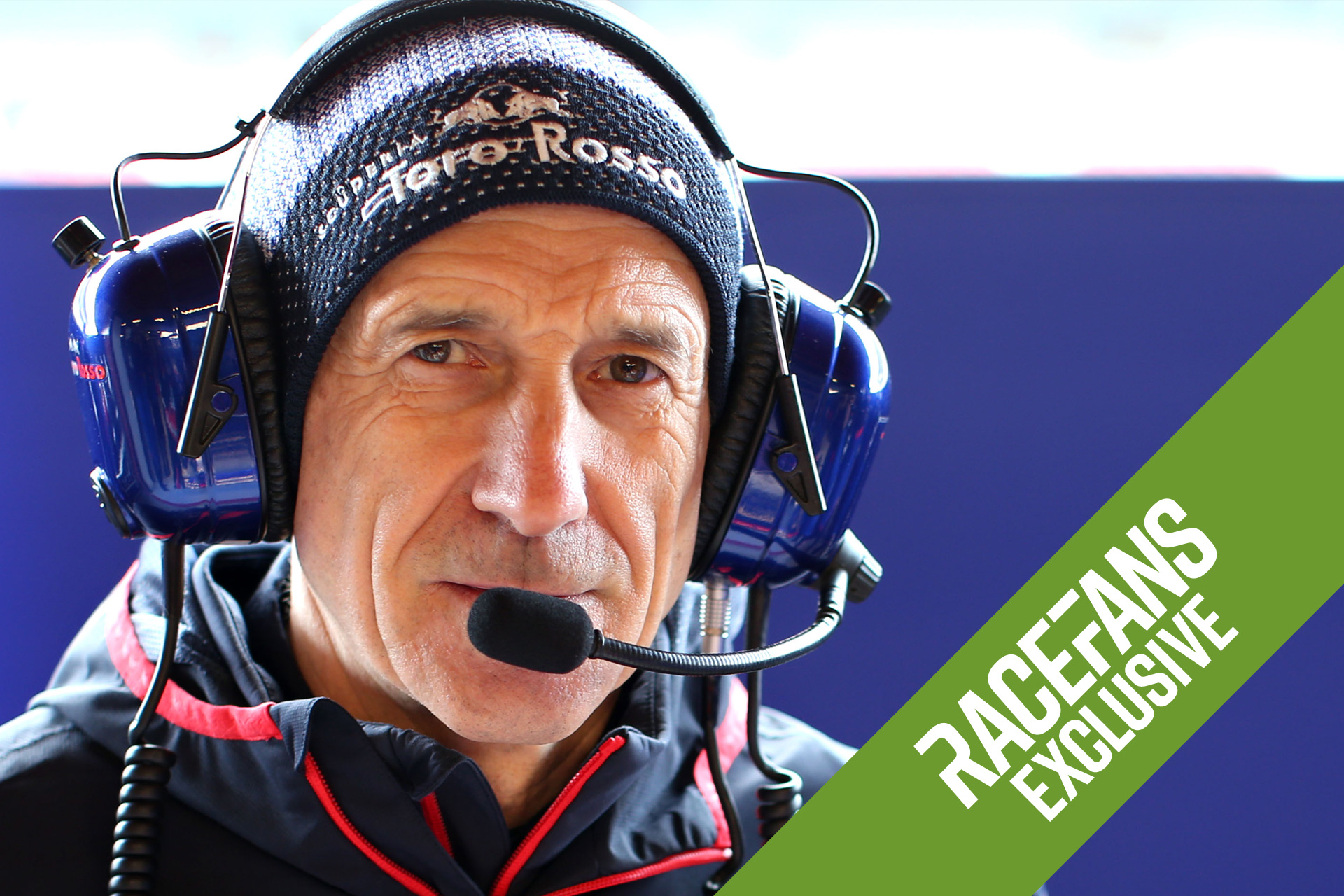 Speaking to RaceFans in an exclusive interview at the Circuit de Catalunya this week, Toro Rosso team principal Franz Tost urged Liberty Media to get a deal on the table for the 2021 F1 season, and explained how the new Red Bull-Honda partnership benefits his team.

Franz Tost is the second long-serving team principal in the pit lane after, saliently, Christian Horner, boss of sister team Red Bull Racing. Yet the man at the helm of Toro Rosso is, to many Formula 1 folk, an enigma. Tost and Horner’s records speak volumes about the respective abilities and tenacities of not only both men, and also of the massive faith Red Bull owner Dietrich Mateschitz has invested in them.

Mateschitz is not known for his patience – nor, for that matter, is his trusted motorsport lieutenant Helmut Marko – yet their F1 team executives, who collectively control entities turning over half a billion per annum, have out-lasted (and arguably out-performed, depending upon metrics), more than a few of the sport’s ‘names’.

Austrian Tost, 63, is a man steeped in motorsport. As a youngster he competed in Formula Ford and Formula Three while studying sport science and management, then switched to team management before being hired to manage the affairs of a budding Ralf Schumacher. When the German moved into F1, so did Tost.

When the driver moved to Williams, Tost joined before catching the eye of its Bavarian engine supplier BMW, which appointed him as F1 track operations manager. At the end of 2005 Mateschitz acquired the struggling Minardi team with a view to creating a finishing school for the more talented drivers on its books, and decided appointing Tost was a no-brainer given his CV.

[retrompuminardi01]On the first day of testing at the Circuit de Catalunya this week, after an open media session and some television commitment, Tost returned to the test hospitality unit for his first exclusive one-to-one. “You booked first, so you get the first slot,” the team’s media manager told me. His media session a few minutes earlier provides a starting point, but there’s much more I want to discuss.

Toro Rosso is arguably one of the teams mostly likely to benefit most from F1’s proposed budget cap, slated for introduction from 2021. The team’s structure and business model lends itself perfectly to restrictions on spend and parts sharing. Thus Tost is anxious to see cost controls introduced, and not just a watered-down process.

Are things happening quickly enough? “No,” is the succinct answer. This begs the further question: “Why?”

“It’s too slow. They should come up with decisions. We’re talking [for] a long time now and the technical regulations are not fixed yet, the sporting regulations are not fixed yet. We have this cost cap, money distribution, and all this kind of stuff. All the main pillars are still in discussion and Liberty Media has to come up now with decisions.”

In the absence of multi-party agreements that include teams in the post-2020 regulatory process, the governing body intends adhering to the FIA’s International Sporting Code clauses that require 18 months lead time for major regulations changes, without necessarily including teams in the process. How does Tost see the situation evolving?

“The teams are still involved. There are technical working groups meetings, and so on. But once more, if I [were] at Liberty Media I wouldn’t involve the teams so much, because Liberty Media have the infrastructure to come up with rules. Ross Brawn, Pat Symonds and all the others are so experienced they know exactly what Formula One needs, they know exactly which direction to go.

“The governance is the next point which has to be finalised, but there is the Sporting Code, and the sporting regulations, that’s it.”

Is it practical to exclude the teams from the decision-making process?

“I don’t think that they will be completely excluded, that’s not necessary. But the FIA and Liberty have to come up with proper proposals and say ‘Look, this is the direction that we want to go’, and then of course there will be a discussion with the teams.

“If part of the teams don’t agree, then [FIA/Liberty] have to decide. There will not be all teams which will not agree, there will always be some teams ‘yes’ and some teams ‘no’. If you get proposal with let me say 50 points, then maybe you feel ‘Ah, 10 points are bad for us but 40 points are OK for us’.”

Given that there are only four months remaining before deadline, could the regulation changes be pushed out a year?

“No, I don’t think it’s possible because it’s not only the regulation changes, it’s also the money distribution, it’s the cost cap, it’s many things. And what does it change if you postpone it by one year? You just discuss another year in addition. If you can’t make a decision until now, why you should be able to make a decision one year later?”

I try a different tack; What is the main difference in this regard between Liberty and the man who previously controlled F1, Bernie Ecclestone?

Which is the more effective?

According to a source, Liberty intends operating a ‘shadow’ budget cap during 2019, tracking team spend against notional caps. I fly a kite: Has he heard about the concept; if so, how does he see the concept?

“Yes, there are different models they are talking about, and the ideas are quite good. The rest we will see. We from Toro Rosso support them, if they want to know anything, we are open.

During the open session Tost suggested that there was space to grow the calendar; indeed, the implication of his comment was ‘the more the better’. Does he believe the F1 calendar can grow to, say, 25 races, and equally have a budget cap? After all, more races costs more money…

“But you get more money,” he argues. “Otherwise it doesn’t make sense. Look, one thing is clear: to increase the number of races only makes sense if you increase the revenues, for the teams as well. I hope this is clear, because otherwise you don’t need more races.”

“It must be clear: If we have more races, we need to have more revenues, otherwise we can’t afford it and otherwise it doesn’t make sense.”

Finally, how does Tost who, after all, has seen a variety of qualifying formats come and go during his 13 years as team boss, feel about mooted changes to the weekend format, which could possibly be introduced next year if Liberty’s plans to stagger the changes go to schedule.

He is, though, unfazed by the specifics: “[What’s] decisive is that we have interesting races,” he says.

“If the races are boring, you can have whatever weekend format you want to have. To have no Friday, to have only Saturday, Sunday – if [on] Sunday the race is boring, no one cares. We should be concentrated what really counts, and what really counts is that we have interesting races.

“To cancel Friday [activities], organisers are not too happy about this because they want to sell tickets also on Friday, they need it from the commercial point of view.

“[But] for me these are secondary points. I personally don’t care whether we are here on the Saturday, Sunday, or whether we are here also on Friday. Because they think is to reduce the time being at the track by one day… I don’t think that this is a major topic which counts, because you have to send the mechanics, you have to send the people who build up the garage anyway earlier one, two days.

How much excitement with 2019 F1 season will produce could be strongly influenced by how competitive Red Bull are with their new Honda power unit. Tost believes they can win races this year, but why is he not making the same prediction for his own team?

“Because we have a completely different infrastructure,” he says realistically. you cannot compare Toro Rosso with Red Bull Racing or with Ferrari or with Mercedes

“These are teams that are operating with [budgets of up to] €500 million; we have less than a third of this budget, and are simply not in a position to compete against these top teams. This is also not the target of Toro Rosso. But I think, because of this co-operation with Red Bull Technology, that we can also improve our performance.”

So where does Toro Rosso now stands in this Red Bull-Honda constellation?

“I don’t talk about number one or number two, because we get the same hard[ware] and software from Honda. And as I mentioned already in the past I’m more than happy and confident that Red Bull [Racing] is running a Honda engine because then there are two teams, and it’s the Red Bull [brand] and overall it’s referred to as one company.

“This will help us to improve [our] performance. Last year was a build-up year for Honda as well as for us, and it was not an easy season, but we got everything together.”

Given Toro Rosso’s role as development platform for Red Bull’s drivers, can the same be said of Toro Rosso when it comes to engines? Will the team be expected to ‘carry the can’ on behalf of the senior team, particularly given its 2018 record of consuming more engines than any other team, allegedly in the name of ‘development’ for the future?

Tost rebuffs such insinuations immediately: “No, we are not a development team. Toro Rosso is a team on its own. What I always say and mention is ‘if there’s something from Honda’s side which has to be tested, which at the end will be integrated in the development progress, of course this is fine to do it’. But it’s not that we are their development team.

Now that Red Bull and Toro Rosso again share common power units, the plan is to share some non-listed parts (those that teams are not required to hold the intellectual property to) to save time and costs where feasible. Think the Ferrari-Haas model. What, then, will Toro Rosso source from Red Bull and its supplier Red Bull Technology?

“We have got from them the rear part of the car, which means the gearbox, the rear suspension, the hydraulic system, and that’s it. We could have had it last year, but they had another [Renault] engine.

How’s that changed from the previous model?

“From last year to this year we have another gearbox, and we have another rear suspension, but the front end, the wishbones are Toro Rosso wishbones; the [car] internals are mixed with Red Bull.

Is it a one-way street, or do parts flow from Toro Rosso’s Faenza base to Milton Keynes? Do they take parts off you?

“No,” he says. “The parts which we get from them are being produced by them. The rest we do ourselves What we have from them, the gearbox, is [their] last year’s gearbox. A little bit [was] changed to mount the Honda engine. And the suspension is their last year’s suspension, not this year’s.”

Having lost technical director James Key – he moves to McLaren, start date to be confirmed shortly – what is the team’s technical structure now that Jody Egginton is the top engineering honcho?

This methodical approach is typical of Tost – as is the undimmed passion for racing which shone through in our interview.

Have you got a question about Formula 1 you would like our special contributor @DieterRencken to tackle? RaceFans Supporters can send their questions for Dieter’s Inbox here