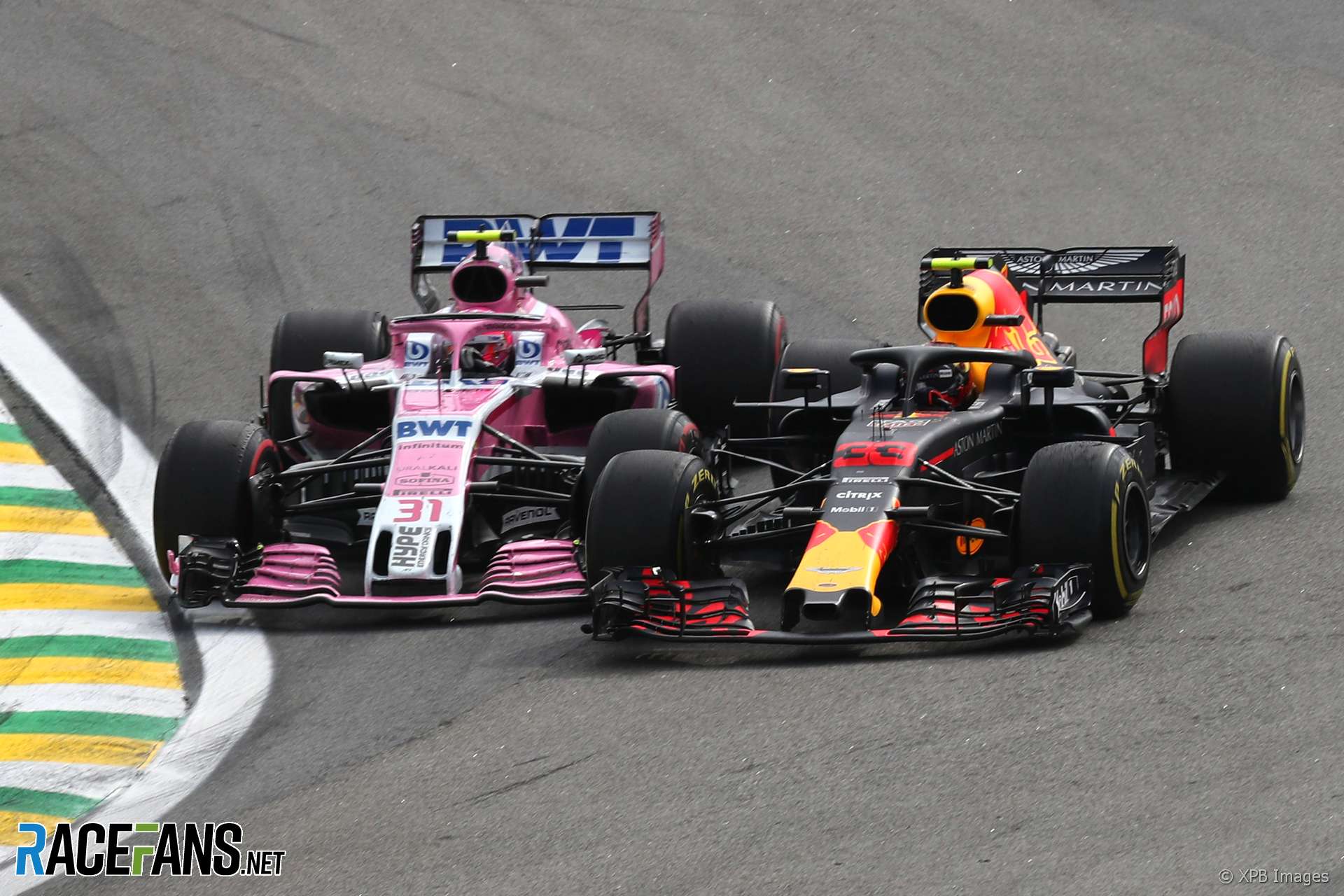 Before last weekend’s Brazilian Grand Prix many were inclined to look sympathetically at Esteban Ocon.

Here was a driver in his second full season of Formula 1 doing a solid job against a quality team mate, who was set to lose his set to a rival who is more well-monied than well-regarded.

Then Ocon made the blunder of knocking race leader Max Verstappen into a spin while he was being lapped. That plus a post-race altercation between the pair, where Verstappen shoved Ocon repeatedly, left many feeling they’d seen a new side of the Force India driver.

As Ocon is a Mercedes junior driver and it was Lewis Hamilton who inherited Verstappen’s lost win, the inevitable conspiracy theories set social media ablaze and leapt to the lips of Red Bull’s motorsport director Helmut Marko. Some harked back to Monaco, where Ocon made it conspicuously easy for Hamilton to overtake him.

Had the driver first noted for his ‘Oconsistency’ now colluded in an ‘Oconspiracy’? “This is how Dr Marko sees the world,” responded Mercedes team principal Toto Wolff.

“And I want to leave it with that because I don’t want to go on this level. We have a fifth championship to celebrate today.” His opposite number at Force India, Otmar Szafnauer, was similarly dismissive.

A glance at the data from the two drivers’ races makes it abundantly obvious that this was a collision of circumstances rather than conspiracy. A collision between a race leader nursing his tyres and a backmarker hunting a point for 10th place who’d just left the pits on fresh rubber.

Moreover, this was a collision between two drivers with a lengthy and at times acrimonious shared past.

Four years ago Ocon won a season-long scrap between the pair for the European Formula Three championship. However Verstappen, who suffered costly reliability-related setbacks, arguably distinguished himself as the more impressive of the two, and it was he who landed an F1 drive with Toro Rosso for the following season.

Any driver who doesn’t have a cast-iron conviction he can beat any of his rivals given the same equipment doesn’t belong on a Formula 1 grid. Ocon undoubtedly believes he can out-drive Verstappen, and when he emerged from the pits at Interlagos on Sunday he had a rare opportunity to prove the point.

It also coincided with a frustrating spell for Ocon. Since the collapse of his potential move to Renault and the takeover of Force India by Lawrence Stroll’s consortium, it’s been an open secret that he won’t have an F1 drive next year unless he lands a seat at the team which is currently propping up the points table.

While he’s demonstrated he has the upper hand over team mate Sergio Perez in raw pace this year – Ocon is winning the qualifying battle 15-5 – he has struggled to overcome the huge points cushion Perez built with his podium finish at Baku. When the chequered flag dropped at Austin, Ocon had trimmed that margin to a single point. Then he was disqualified for a technical infringement outside his control.

Ocon spoiled his race in Mexico the same way he did in Azerbaijan, with a first-lap misjudgement. The setbacks continued to mount in Brazil, where a gearbox change penalty relegated him to 18th on the grid.

After his pit stop Ocon was 14th with a credible shot at 11th. That would have left him one place behind Perez – a decent result given his penalty, and poised to grab a point if anyone ahead dropped out.

So when Ocon rejoined close behind Verstappen he had a clear need to un-lap himself. He had to keep his pace up to ensure Brendon Hartley and Carlos Sainz Jnr would drop behind him when they pitted. He was on fresh super-softs, Verstappen older mediums. Under these unusual circumstances, the Force India was lapping a few tenths quicker than the Red Bull. And that Mercedes power unit gave him a tremendous straight-line speed advantage.

Verstappen knew Ocon was eager to get by: He acknowledged the Force India’s presence on his radio. And approaching turn one as lap 44 began, Verstappen even moved off-line to defend his position.

Whether this was a prudent move by the Red Bull driver is besides the point: Ocon should have taken the hint that the position wasn’t going to be worth fighting for. After all, had he got ahead, he couldn’t realistically expect his tyres to stay fresh long enough to pull away from Verstappen. And then he would have to succumb to the inevitable, time-sapping blue flags.

But for Ocon the temptation to put one over his old foe was too great. How better to issue a reminder of his capabilities to everyone – especially Mercedes, who may have a vacancy in 2020 – than by refusing to back down in a wheel-to-wheel fight with one of the sport’s toughest racers?

He marked Verstappen’s card in anticipation of future fights. And to make sure the point wasn’t missed, when Verstappen came looking for him after the race, Ocon pointed out he had been quicker at the time and grinned. Knowing Verstappen as he does, Ocon probably guessed how his rival would react, not that it excuses Verstappen’s retaliation.

It wasn’t a conspiracy. Ocon probably didn’t even expect Verstappen to turn in. But you have to wonder whether he cared if he did.

146 comments on “Oconspiracy? No, but he knew what he was doing”